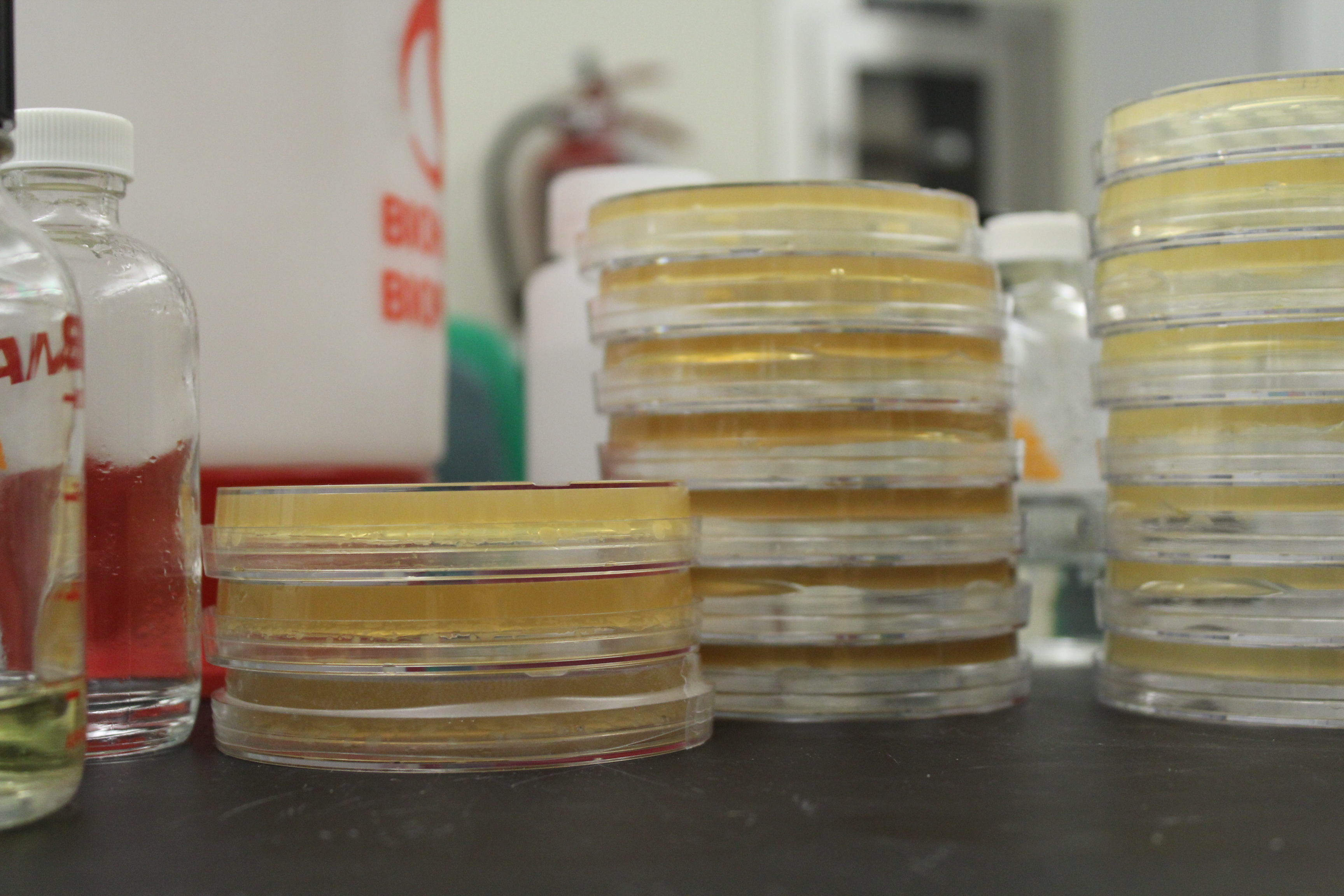 This year’s project began as a continuation of the 2015 iGEM team’s project. Previously, the purpose was to isolate bacteriophages that use TolC (an outer membrane protein) of pathogenic bacteria for infection. The goal was that any isolated bacteriophages may be used as an alternative to antibiotics in treatment of bacterial infection. To avoid using any pathogenic strains in lab, we used the tolC genes of the various bacteria in an E. coli deletion strain that lacks the gene. This year, we wanted to expand on this idea, improve certain aspects of it, and turn the focus to a different pathogenic bacteria: Serratia marcescens. The reason for this is detailed in our project description.

We first decided to move the tolC genes of pathogenic bacteria, namely: Escheria coli, Klebsiella pneumoniae, Proteus mirabilis, Pseudomonas aeruginosa, Salmonella spp. , and Vibrio cholera previously in the puc57 plasmid, into a medium-copy-number plasmid. Reducing the copy number allowed better study of the function of TolC without the overproduction that occurs in a high copy number plasmid. In other words, the high copy number plasmid (pUC57) was compensating the integrity of the strains, and a medium copy number plasmid (pTrc99A) was more consistent in results. We also added a new tolC gene, S. marcescens tolC, to our set of tolC genes of pathogenic bacteria. This gene was ordered and synthesized by GenScript. The Serratia tolC gene allows us to isolate bacteriophages specific to the Serratia TolC protein, which has potential for use in bacteriophage therapy of Elkorn coral, a highly endangered coral. After cloning the tolC genes into pTrC99A, we transformed the plasmids into a deletion strain of E. coli lacking the chromosomal tolC gene. We then performed Western blots, as well as Kirby-Bauer Antibiotic assays to ensure the proteins were being produced, and functional. We also added the 2014 iGEM team’s arabinose-inducible promoter to the genes to improve the function of this previous part. This allows us to compare the TolC production when arabinose is present vs. absent in a Western blot. Once the TolC proteins were confirmed to be produced and functional in the tolC deletion strain of E. coli, we used these strains to screen for bacteriophages. Using the process developed by the 2015 team, we were able to isolate phages from the environment (sewage, soil, river water etc). The process for screening allows us to reduce the phage solution of any non-specific phages by over 10,000-fold. It is relevant to note that all of these bacteria, including E. coli normally contain the tolC gene, and therefore this gene modification will not result in increasing the pathogenicity of E. coli or causing this laboratory strain to be infectious in any way for humans.

Western blot analysis of the various strains containing plasmid encoded, pathogenic tolC genes demonstrate the production of the TolC protein (Figures 1 and 2). Notably, the production can be induced with arabinose when the plasmid with arabinose-inducible promoter is used (Gel 2). Alternatively, the genes can be expressed in pTrc99A, a medium copy number plasmid (Gel 1). Because TolC is necessary for antibiotic efflux, the presence of the protein in the outer-membrane increases antibiotic resistance. In the Kirby Bauer assays, the zones of inhibition, highlighted with a double headed arrow, demonstrate the minimum inhibitory concentration the antibiotics for each strain (Figure 3). The plasmid-encoded TolC proteins being produced in each strain are decreasing the minimum inhibitory zones (when compared to the strain containing only the plasmid). Various pathogenic tolC genes do not all work alike in E. coli. The results of the average zones of inhibition for multiple trials of Kirby Bauer assays with standard deviation are shown in Figure 4. Notably, Pseudomonas aeruginosa and Vibrio cholera tolC genes do not appear to function in E. coli. This is likely because these tolC gene sequences are dramatically different than the E. coli tolC gene.

We were not able to isolate any TolC-specific phages this year. However, our team plans to continue phage screening with these strains, especially the S. marcescens tolC strain: the goal being isolation of a TolC-specific phage that could be used in coral rehabilitation. Additionally, we plan to raise Elkorn coral with the intent of researching phage treatment. Currently, we are in communication with the Coral Restoration Foundation (Key Largo, FL) and the Office of Protected Resources to obtain the correct licensing for research-based growth of this endangered coral on WLC campus. 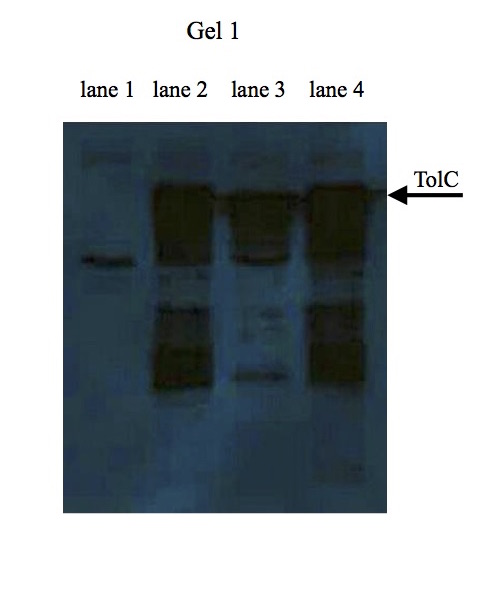 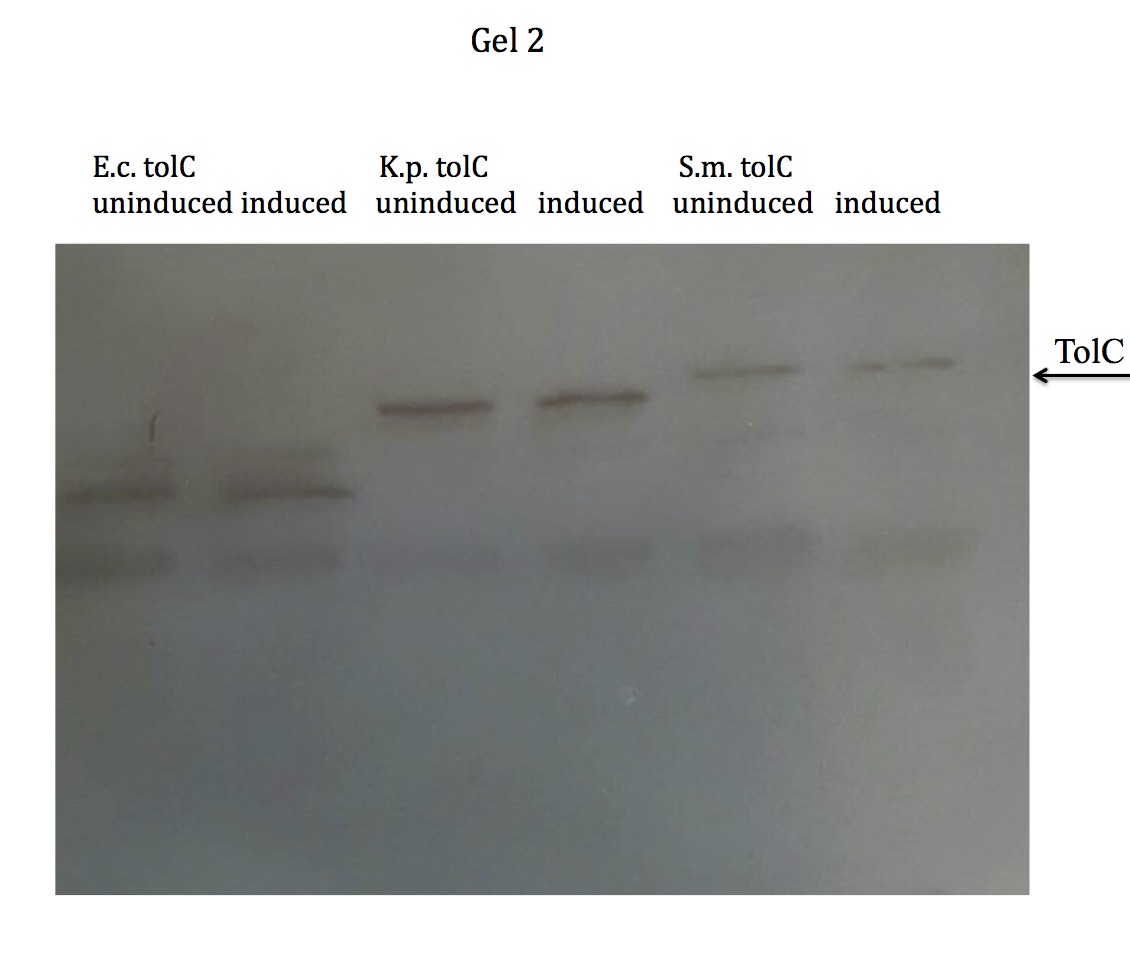 Figure 2: Western blot Analysis of TolC Protein Production by Plasmid-Encoded tolC Genes on pUC57. These preliminary results do not show the induction we would expect, however, the protein is being produced. 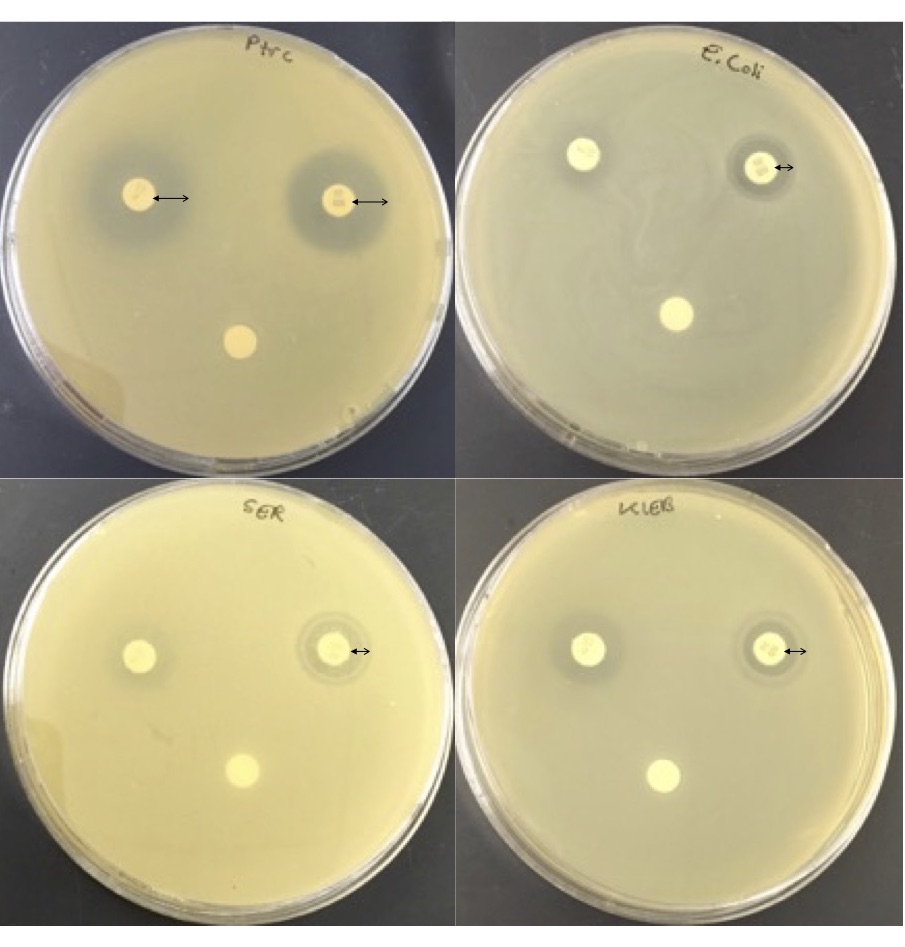 Figure 3: Functional Analysis of TolC Proteins. Kirby-Bauer Antibiotic assays can be used to demonstrate functional TolC proteins. The three discs on each plate contain erythromycin (top left disc), novobiocin (top right disc), and no antibiotic (bottom disc). Arrows indicate zone of inhibition for each antibiotic. Each of the four plates was overlaid with top agar and a culture of E. coli that is lacking the chromosomal tolC gene. The top left plate demonstrates our negative control as it contains the pTrc99A plasmid with no tolC gene. The top right plate is our positive control, as it contains the pTrc99A plasmid with the E. coli tolC gene. The bottom left plates contain Serratia marcescens and Klebsiella pneumonia tolC genes on the pTrc99A plasmid respectively. 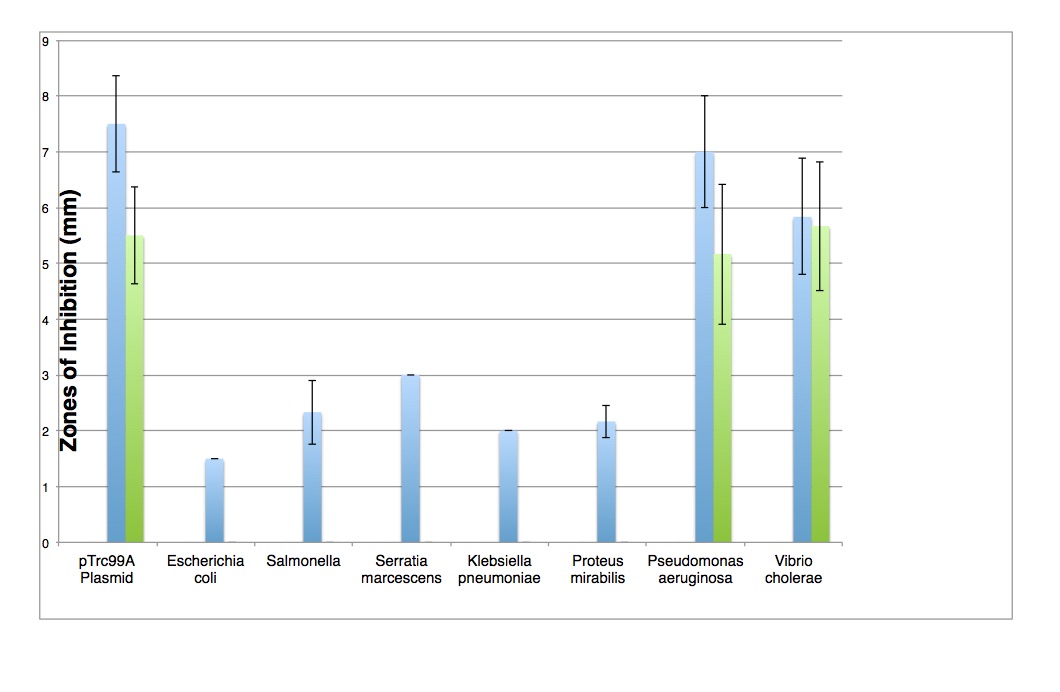 Figure 4: Functional Variation in Pathogenic Bacterial TolC Proteins. The average zones of inhibition in millimeters of multiple trials of Kirby-Bauer Antibiotic assays with standard deviation for both novobiocin and erythromycin is shown for each plasmid-encoded tolC gene.