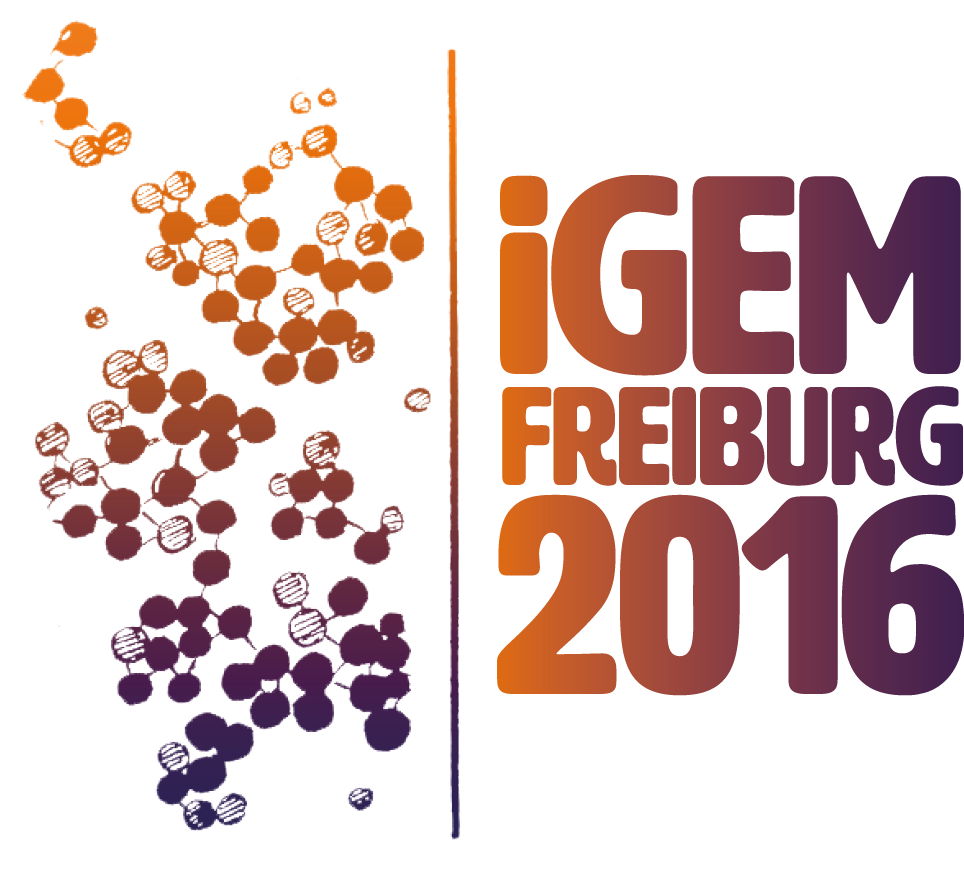 The human colon is home to a lot of tiny microorganisms. To be precise, our whole body contains 10 times more bacteria cells than endogenous cells1. In most cases, these bacteria are not harmful to the human body. Although, some organisms can cause infectious diseases, nearly 100% of our survey participants knew that this doesn’t mean bacteria are generally harmful.

The digestive system is host to several million of bacteria which are essential for digestion, proper absorbance of nutrients and the synthesis of vitamin K and B2. The entire microbiota in the gut is a complex ecosystem that is not well understood yet3. Dis-balances in the composition of the intestinal flora can cause a variety of diseases. We confronted different gastrologists with this topic and they confirmed that the flora is “essential” and “ really important since a disturbed intestinal flora would cause many diseases”. But what exactly is disturbing this intestinal flora? Studies have shown that changes in diets,operations and health condition will perturbate the microbiota and may lead to irritative bowel diseases, chronic inflammation, infectious diseases with harmful bacteria or malabsorption4. Due to individual lifestyle and genetic dispositions, everyone has a distinct bacterial flora in his/her gastrointestinal tract. To support and rebuilt the intestinal flora, people often grab for probiotics. Asking the Ulcerative Colitis patients that filled out our survey, whether or not they have consumed probiotics before, almost half of the participant answered with yes. This result lets us assume that the concerns about taking our product too will not be insuperable.

Probiotics are nonpathogenic, living bacteria with health benefits for humans when consumed in a frequent manner5.
They play an important role in immunological, digestive and respiratory functions and even the number and type of probiotic in foods and drinks are increasing at the moment.6
Typical microorganism used as probiotics today are Lactobacillus, E.coli, Enterococcus and Bacillus subtilis7.
For example: the probiotic Biosporin contains Bacillus subtilis and inhibits the growth of Helicobacter pylori, a bacterium which is known to cause gastrointestinal diseases.8
In this year's iGEM project we, team Freiburg, decided to work with the model organism Bacillus subtilis because of its innocuousness, robustness and ability to build spores. We wanted to use this spores as a carrier for two tools in combination as our new form of targeted drug delivery system.
In our survey we have also asked people, if they think spores are generally harmful to the human body. In comparison to the same question about bacteria, the results are different. Nearly 18.8% answered with “Yes, spores are generally harmful”. 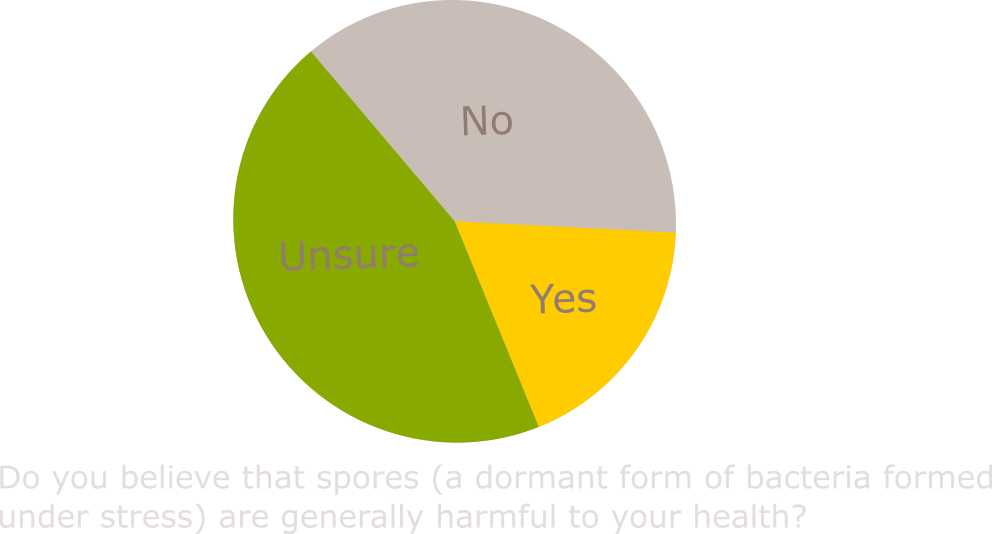 Bacillus subtilis has a rod shaped appearance and belongs to the family of the gram-positive bacteria. Apart from being widely present in nature, it is also already a part of the microbial gut flora 9 and so a perfect candidate for being our probiotic. The US Food and Drug Administration (FDA) classifies Bacillus subtilis as a GRAS (Generally Regarded As Safe) organism 10. That means it is generally recognized as safe and can be used in S1 laboratories without problems. Bacillus subtilis colonies have an irregular, large size with undulate margin. They have a white and dull colour and a dry texture. 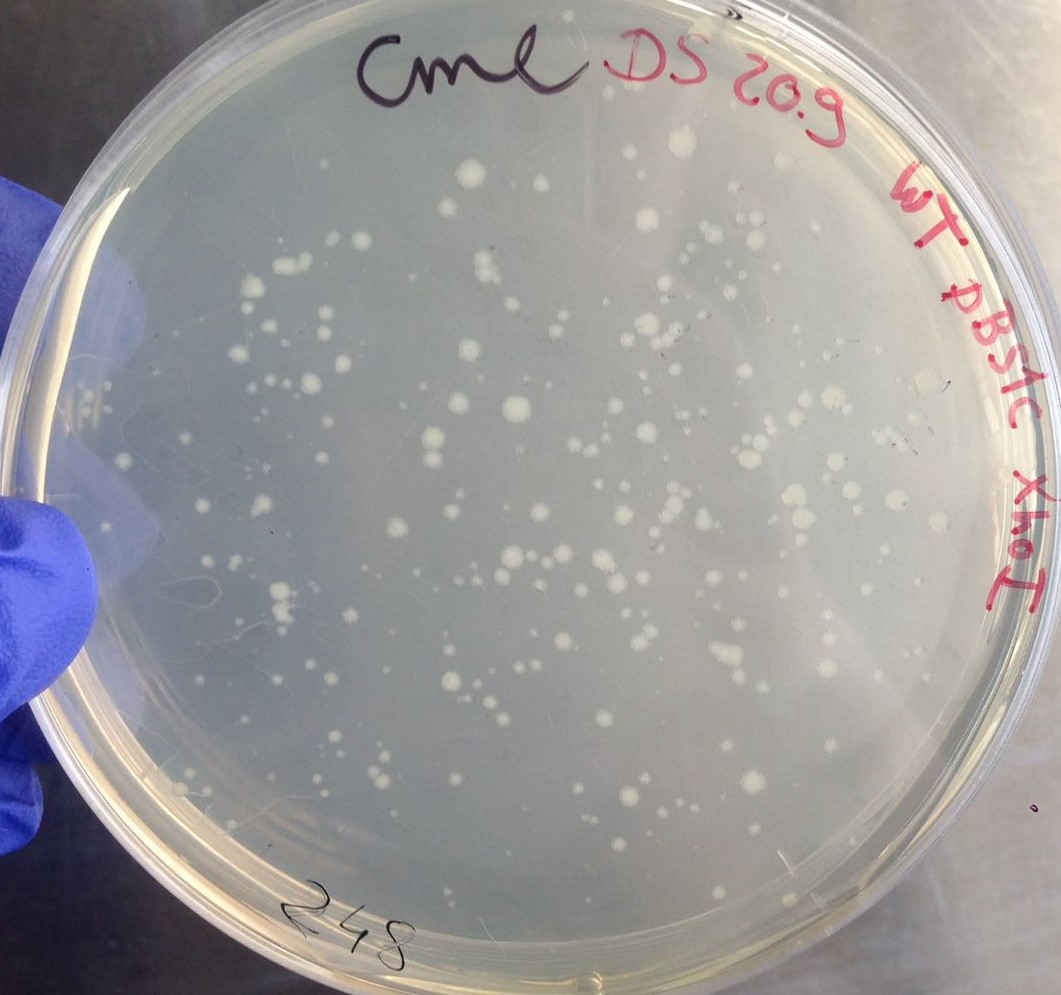 Figure 1: Colonies of Bacillus subtilis
Bacillus subtilis growth follows the typical 4 phases of bacterial growth (Figure 2). The start up phase is called lag phase which comprises the time the bacteria need to adapt to the new environment 11. With reaching the next phase, the exponential growth phase, the bacteria are dividing at their maximum division rate. Bacillus subtilis has a doubling time of 30 minutes under ideal conditions. This can be calculated with the slope of the exponential growth. In our experiment, the doubling time of the wild type is 28 minutes. 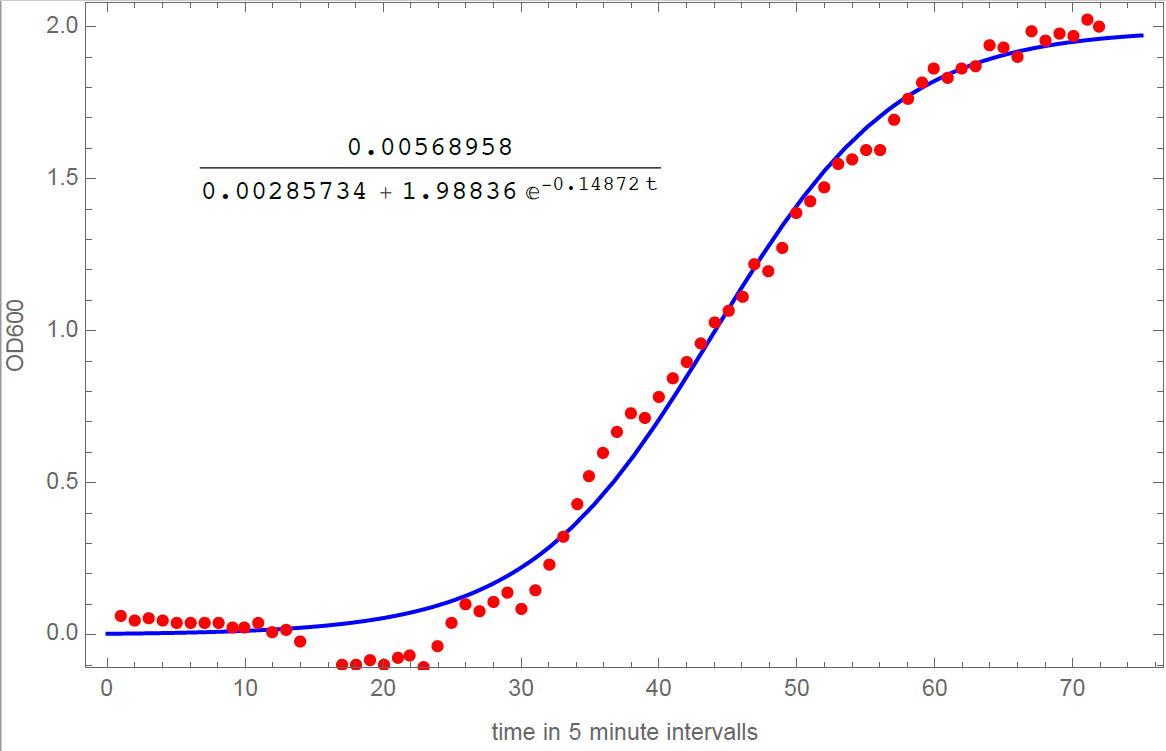 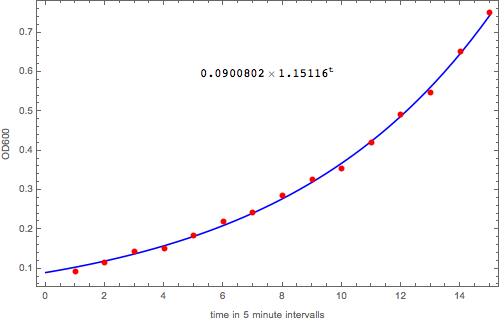 Figure 3: Exponential growth phase of Bacillus subtilis.
When all the substrate is consumed, the stationary stage begins where there is no more additional growth mensurable and the culture is at its highest density. Now the death-phase follows, where the bacterial culture starts to autolyse. Bacillus subtilis is able to form endospore under distress, which is one of the most efficient adaptations to a lack of nutrients.

Figure 4: The process of sporulation.
The sporulation begins with an asymmetrical cell division into the mother cell and the smaller prespore. The smaller prespore is now engulfed by the mother cell and the mother cell starts assembling the multiple layers of the spore. The cortex, a modified form of cell wall, is synthesized to give the spore their typical oval shape. At the same time the crust is formed, the spore coat begins to be deposit on the outside surface of the spore. The last part of the sporulation is called maturation, during this period the characteristics resistance, dormancy and germinability of the spores get established and the mother cell is lysed in order to release the endospore12. This spore is now highly resistant to heat, enzymatic attacks. UV-light and pressure and can re-enter its life cycle under the right conditions.
Furthermore, it is a big advantage for our approach of working with surface fusion proteins, that the mother cell is able to synthesize the wanted proteins by itself and also assembles the proteins to the spore crust by itself. So the process of bringing a protein through a membrane is not needed. Through this, the cumbersome process of fusing proteins to the surface of artificial beads is obsolete. Since the outermost layer of the spore - the crust - is mostly build up of the proteins CotZ and CgeA 13, we use those to set up the fusion proteins. By fusing highly specific binding tools and enzymes to the crust proteins we found a new method of targeted drug delivery to reduce side effects occuring under systemic drug dispersal.
When we started to work with this versatile model organism, we noticed that in our surrounding no one is working with Bacillus subtilis. That’s why we had to reach wider and are glad to got help from Julia Bartels, a former member of the iGEM Team Munich 2012. To ease the work for future iGEM Teams we started a Bacillus subtilis Manual together with iGEM Bonn 2016.

Here are 12 AMAZING Facts about Bacillus subtilis we hope you enjoy:

1. Bacillus subtilis is one of the few bacterial strains which can build endospores.

2. B. subtilis lives all over the world, mostly in soil.

3. Its spores were sent to outer space for one and a half years and were still able to germinate back on earth.

5. If you’d grow a single B. subtilis cell for 100 generations you’d receive 1030 cells after around a day and would need 1018 liters of media. (luckily they starve with a density of circa one billion cells per milliliter, so don’t panic)

6. B. subtilis is used for synthesis of antibiotics. ( such as Subtilin)

7. The core of its endospores is very dry and resistant to moisture.

8. B. subtilis is an ingredient of washing powder. (can produce proteases & amylases)

9. B. subtilis is used as a natural herbicide due to its ability to produce lethal substances.

10. B. subtilis is widely used as a probiotic. (supports your health especially the digestive system)

11. Once a group was able to resume some spores they found in a 250 million years old salt crystal and were able to “revive” them. (not B. subtilis spores though)

Modeling the growth and sporulation of Bacillus subtilis was a rather easy task.
The growth of bacteria proceeds in four phases. Firstly, the lag-phase describes the time it takes for the bacteria to reach their maximal division rate, depending on the age of the culture and the conditions of the new culture.
Secondly, in the log-phase the bacteria are dividing at their maximal division rate. When the substrate is consumed the stationary-phase begins. This is when the bacterial population reaches its highest density, but stops growing. Toxic products start to develop and have a negative influence on the culture. Lastly, the culture enters the dying-phase, which is defined by the start of autolysis. The molecular mechanism initiating the autolysis is not fully discovered yet14.

Our model describes the first three stages of bacterial growth. We assume that the growth follows the rules of logistical growth, so it can be described by the following equation15. 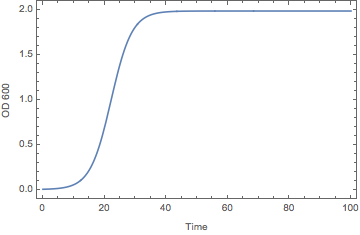 
The sporulation is one of the most important parts of our project. That's why we used a model that allows us to calculate the amount of spores that come out of one sporulation process.

As mentioned before, we assume that the bacterial culture follows the rules of logarithmic growth during this sporulation.

A certain percentage of our growing culture turns into spores. We assume that spores cannot germinate in the medium. The following formula describes this process. 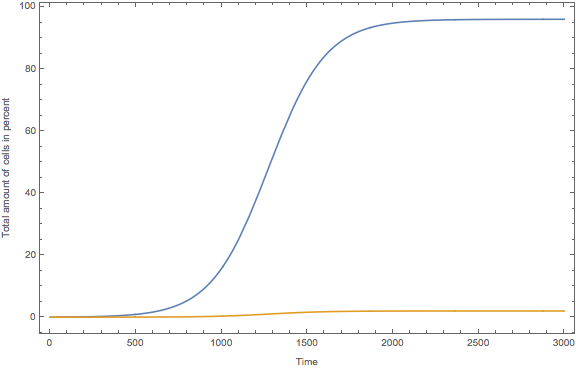 Modeling the protein expression was another task for us due describe generation of our Nanocillus. Having a promotor whose activity is induced during sporulation, we need to choose an mRNA transcription equation that reflects this. Combining this with an equation that simulates the conversion from mRNA into protein terminates our model. This model represents the protein expression under the assumption that the concentration of the activator protein never changes16.

In more complex models that we did not use, the expression of coat proteins is a highly conserved pathway of feedback loops17. 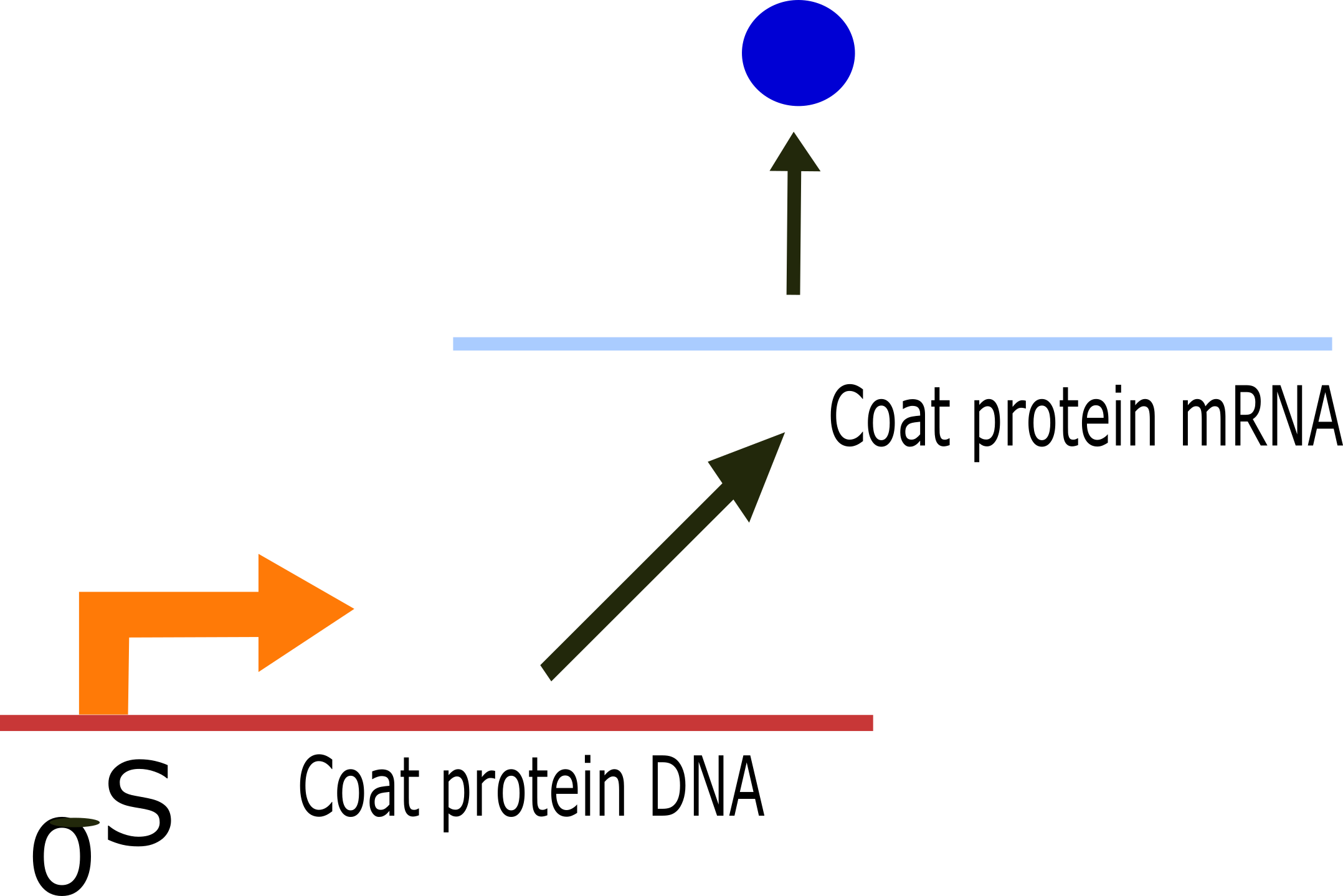 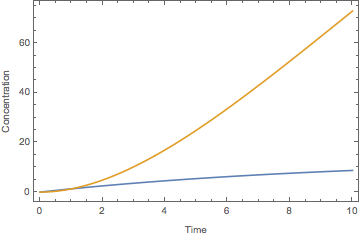