With regards to safety, we have considered three main areas: interaction with the body, interaction with the gut microbiome, and exposure to the environment. Within each of these areas we have identified a number of concerns (red boxes) and shown how our designs address these (green boxes). Below is a diagram summarising the potential hazards and the solutions we have considered and/or integrated into the design of our project as a result. Please use the sidebar to navigate.

Before we were allowed to enter the laboratory, we were given a briefing by the departmental Safety Officer, Steve Curnock. He informed us of all the potential risks and dangers associated with the use of different chemicals, techniques, and equipment, and how we could minimise these risks. Following this, we were given a laboratory induction by our supervisor, who demonstrated the safest and most efficient ways to carry out the protocols we would require. Full details of these protocols can be found here.

In addition, we attended a university-wide safety course on experimentation involving GMOs.

Consideration of safety has been a big part of our project ever since its inception, before even entering the lab we had to complete a GMO saftey assessment for approval by the Departmental Safety Committee. As with any newly developing therapeutic, the potentials risks to a patient, and how these can be minimised, are constantly on the minds of the researchers. We thought and read extensively about safety as, not only are we developing a novel treatment, but we are attempting to use bacteria to deliver this treatment. Any synthetic biology project has associated risks, but these become significantly larger when the ultimate aim of the project is to introduce these bacteria into a human.


Interaction with the body

As with any novel treatment, we must consider the potential effects of the treatment outside of the role we are designing it for. There is no sense is designing a wonderful therapeutic that cannot be taken due to severe, limiting side effects. We considered the potential pathogenicity, toxigenicity and immune response of our therapeutic.

Pathogenicity refers to the ability of a pathogen to cause disease. When investigating public perception on GMOs and their use as a possible medical treatment, some members of the public made clear to us that that they found the idea of ingesting bacteria “off-putting” and were concerned about safety - bacteria are usually viewed as “bad”. This tied into our safety research into the pathogenicity of a possible treatment.

Toxigenicity refers to the ability of a bacterium to produce a toxin. A unique feature of probiotic therapeutics is that they are live when administered, and hence have the potential to produce toxins in situ. A bacterial toxin has the potential to seriously harm a patient, so this was a serious safety concern that we considered as we designed our project.

Although considered to be widely safe(3), certain risks are associated with the use of probiotics. These risks can vary depending on the bacteria and strain, but little is known about the extent to which they may affect a patient due to insufficient research into the safety of most probiotic strains.

It has been long known that probiotic bacteria can confer health benefits onto a consumer(4). One of the potential causes of this may be the ability of these bacteria to modulate the innate immune response(5). The long term effect of this manipulation on the host is difficult to predict, but there could potentially be an adverse effect on immune development. However, immune development occurs at a sufficiently early age that Wilson’s Disease is unlikely to have been diagnosed, and thus, treatments are unlikely to have been initiated.

Interaction with the gut microbiome

As our ultimate goal is for a therapeutic to be able to stably reside in the gut for significant periods of time, we had to consider how it might interact with the gut microbiome. This was a key safety aspect of our project: as the importance of the gut microbiome has become increasingly evident in recent years(1)(2), and we do not want our probiotic to damagingly disrupt it.

E. coli Nissle 1917 is a non-pathogenic strain, reducing the risks associated with using a violent pathogen. However, it does produce “fitness factors” called colicins, which are toxic to other E. coli strains(7). This is advantageous to our treatment however, as we want our bacteria to successfully compete to remain in the gut. Furthermore, E. coli Nissle 1917 has actually been shown to successfully outcompete intestinal pathogens to form biofilms in the gut(8), meaning that our probiotic should be safe to consumer, and may actually have additional advantageous effects on patients. Furthermore, the ability of E. coli Nissle 1917 to form biofilms increases its long term persistence in the gut.

Exposure to the environment

Although we hope that our therapeutic would reside in the intestine, human faeces contain live gut bacteria, so there is the possibility that our live probiotic could escape the confines of the body and be released to the environment. We had to consider the potential impact of this when considering safety.

Bacteria become dangerous and must be killed

There are a variety of ways in which our bacteria may become dangerous, requiring a rapid end to the treatment. The treatment system may work differently than expected, e.g. too well - resulting in a copper deficiency, which is undesirable. However, this is not currently a concern within our project as our modelling suggest that the maximum theoretical degree of chelation is still below the excess level that is ingested by Wilson’s Disease patients. Alternatively, as bacteria are living organisms, with a relatively high replication rate, there is the possibility that dangerous mutations may occur that could eventually harm the patient.

We considered the possibility of bacteria escaping the confines of the body when developing our potential therapeutic. And the effect that this may have on the environment.

We considered solutions to each of the problems we identified.

When researching possible delivery method for our probiotic, we had to consider the risks associated with the different possible delivery methods. Probiotic bacteria have been shown, in rare cases, to have a severe pathogenic effect: resulting in conditions such as bacteremia (bacterial infection of the blood) and endocarditis (bacterial infection of the inner lining of the heart). All cases of these conditions are characterised by the presence of central venous catheters or feeding tubes(3). Hence, we decided that our therapeutic would have to be delivered orally, to reduce the risk to the patient. Following this we talked to patients to determine in what form they would prefer their oral therapeutic to be delivered.

Chassis choice plays a key part in the safety and longevity of our potential probiotic. When choosing the chassis we ultimately wanted to test our chelation system in, we had to consider a variety of concerns. These included the pathogenicity, toxigenicity, possible presence of colicins, potential to spread antibiotic resistance, and the ease with which the treatment could be aborted if necessary.

A variety of bacteria colonise the human intestine, we wanted to choose the safest and most useful species for our probiotic. We spoke to a Professor of Evolutionary Biology, Kevin Foster, about the distribution of bacteria in the intestine and he advised us to investigate several well-studied probiotic species. We ultimately decided that our final chassis would be E. coli Nissle 1917, although we would carry out our experimentation in E. coli K-12 MG1655 for ease of testing. 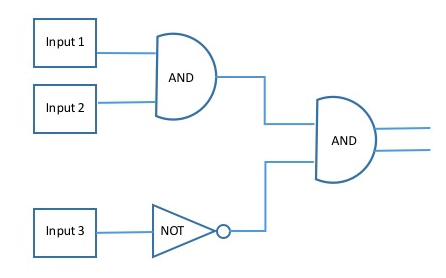 Although we were unable to produce a bacterium containing a kill switch due to time restraints, we had originally designed our expression system in such a way that all potential risks were minimised. Our initial design was based on an AND gate, in which 2 specific conditions would need to be met to initiate the expression of our chelators. These 2 conditions would be copper concentration and temperature. By ensuring that both a specific copper concentration and temperature would need to be met to allow expression, we impose a safety mechanism on our bacteria that means that, outside of the gut when the temperature drops below 37°C, our bacteria would not act abnormally relative to an unmodified strain.

An extension of this would be the use of the ‘Passcode’ kill switch(9). This kill switch is sensitive to 2 possible inputs. In order to permit cell survival, inputs 1 and 2 must be present, and input 3 must not be present. In the case of our therapeutic, inputs 1 and 2 could be copper concentration and temperature, as discussed above. Input 3 could be another molecule, which, if necessary, could be taken by the patient to initiate cell death.

The level of pathogenic bacteria in sewage sludge varies depending on the stabilisation procedures at different sewage treatment plants, with research suggesting that further optimisation of water purification methods are required(10). However, as we plan to use a non-pathogenic, well-studied probiotic bacterium as our chassis, this is not a concern for us. It is unlikely that our bacteria would pose a serious threat, especially as our chosen chassis has a limited ability to survive outside of the body.