Biosynthesis of Taxol in E.coli

What is Taxol? Why is it important?

Taxol, generically known as paclitaxel, is a chemotherapy drug highly efficient in combating multiple forms of cancer via interference with the normal breakdown of microtubules during cell division. Taxol’s efficacy has earned it a place on the World Health Organization’s Model List of Essential Medicines, a roster of the most critical medications needed for a basic health system.

Not surprisingly, there is an ever-increasing demand for taxol. Unfortunately, current production methods for the drug do not provide a long-term, sustainable supply. Taxol is derived from the bark of the Pacific yew tree, Taxus brevifolia, but isolation from its natural source is hindered by the slow growth of the tree and by the low concentration of the drug in the bark. Consequentially, large numbers of yew trees must be harvested for modest returns. Other production methods make use of chemical and semi-chemical synthesis, but the intricate stereoisomerism and multistep pathway of taxol production result in low yield rates and high production costs. Deriving taxol from nature is environmentally unsustainable; chemically synthesizing it is economically unsustainable. Biosynthesis of taxol is the best solution to the shortcomings of the aforementioned production methods. Plant cell fermentation has been shown to synthesize taxol somewhat effectively and requires minimal harvesting of the yew tree. As impressive as plant cell fermentation is, the potential for taxol synthesis in bacteria, an organism much simpler and far more optimized for fermentation, is vastly greater. Duke iGEM’s goal is to optimize the biosynthesis of taxol in E.coli. 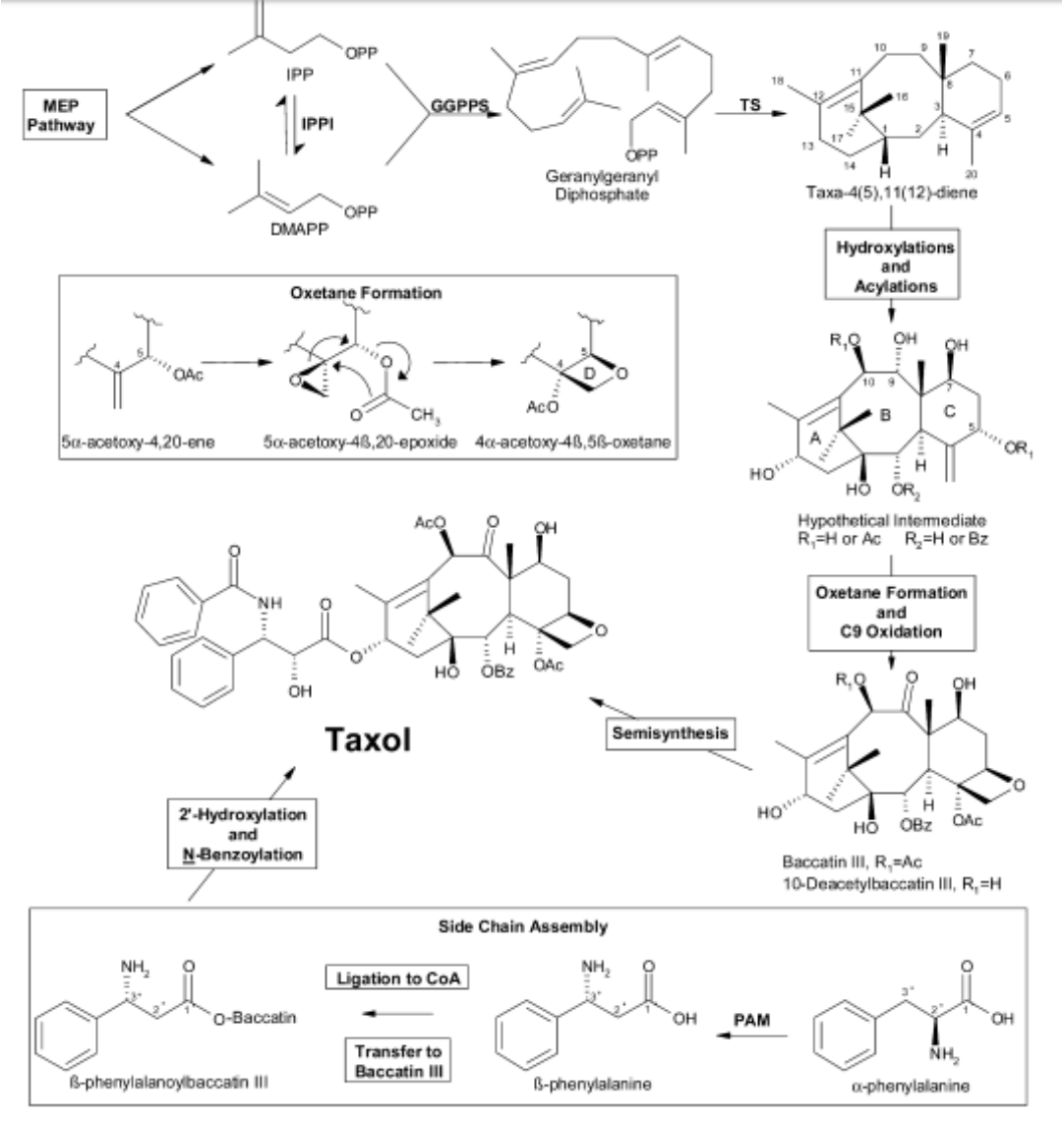 Our primary objective is to individually characterize and then consolidate known enzymes of the taxol biosynthesis pathway into a single strain of E.coli. As such, our research plan consists primarily of two components: a cloning project and kinetic assays to characterize the system. Additionally, the existing enzymes as found in published literature may be insufficient for highly effective production of taxol. In their current states, the enzymes have a wide range of turnover rates that would lead to bottlenecks in the pathway even with high expression. Optimization projects targeting the enzymes with the lowest turnover rates will be undertaken to remedy the bottlenecks.

Currently, we have successfully cloned the majority of our enzymes into E.coli using Gibson assembly and are in the early stages of kinetic assays, most of which take advantage of CoA chemistry. Once cloning and assays are complete, we will combine the enzymes into one plasmid via Golden Gate assembly.

More efficient synthesis of taxol will lower the cost of the drug and its production, but this cost is not the only determining factor of accessibility. In order to understand how lowering the cost of drug production will translate into more available treatment, members of Duke iGEM with experience in bioethics, pharmaceutical patent law, and economics are analyzing and modeling the actual cost of taxol treatment by taking into account healthcare systems and distribution logistics.

As discussed above, taxol is becoming more important in our society but it is not getting less expensive. The paper below explains this conundrum and how a bacteria that can produce taxol via a fermentation process would be helpful.