Primary Principal Investigator (Primary PI) - Professor João Carlos Monteiro de Carvalho, Ph.D. Our team really appreciate Professor João’s contribution to the team with his expertise about algae cultivation. He also, in a position of authority, assisted with official aspects in the University. We thank him for believing in us and providing laboratory space, some reagents and equipment.

Secondary Principal Investigator (Secondary PI) - Livia Seno Ferreira Camargo, Ph.D. Our team would like to thank Livia who contributed with her expertise in algae molecular biology and cultivation. She provided great help with team registration, fund raising, giving support throughout the season and helping on the contact with IGEM for updates, and companies for laboratory supplies and donations.

Instructor - João Vitor Dutra Molino. Our team would like to say thank you to João, who contributed with his expertise in algae molecular biology, cultivation and protein purification. He motivated the team by planning experiments, gathering team members and giving a day to day support. He also worked hard on tasks as lab duties, fund raising, laboratory training and hardware development together.

Instructor - Thiago Mosqueiro, Ph.D. We would like to thank Thiago who contributed with his expertise in data analysis and scientific programming by helping in the analysis of the screening experiment. He also helped us write pieces of code to analyse our fluorescence data.

USP_UNIFESP-BRAZIL team would like to sincerely thank our sponsors for their support, for making our registration (Merck KGaA), donating reagents (Merck KGaA and Thermo Fischer Scientific), and financing some of the travels to the main event Giant Jamboree (Pro-rectories from University of São Paulo). We also would like to thank everyone who donated to our crowdfunding campaigns. 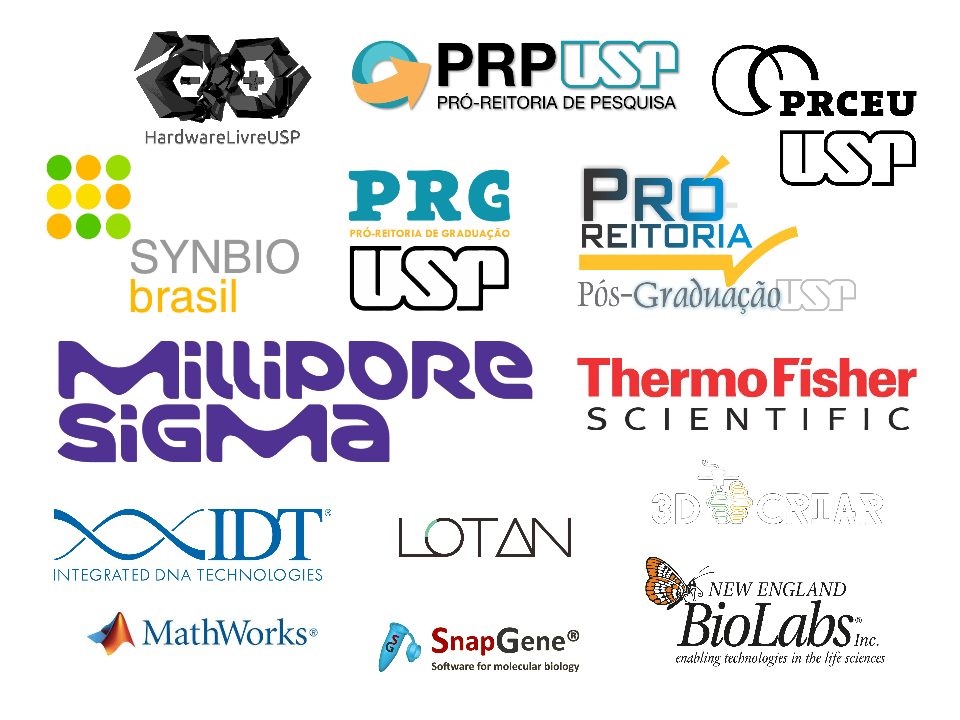 USP_UNIFESP-BRAZIL team really appreciate the support given by Professors, who allowed us to use their laboratory space, reagents and equipment, and by their knowledge contribution; Company's employees, who were reached easily and gave their best to make the donation process faster, and Institutions and Companies that helped us by publishing our ideas and project.

University of São Paulo/Institute of Chemistry

What if we could spread our project idea in media and press?

That was one of the first questions that our team asked, and the answer was: yes! The first report was launched by the brazilian website TechMundo (World Technology) in May 2016 and named “Algaranha: Brazilian create webs from algae to heal burns”. The report highlighted the project objectives and explained the iGEM competition.

The paper “Chimeric spider silk production in microalgae: a modular bionanomaterial” was released on June 23rd 2016 by the innovative, open access journal RIO (Research Ideas and Outcomes). This paper explains the project idea, emphasizing the possibility of exploring the modular characteristic of spider silk proteins and describes the methods to achieve it.

The report entitled “Ready to Compete” was publicly released in September 2016 by ‘Pesquisa FAPESP’, a magazine published by São Paulo Research Foundation with a current circulation of 44,000. The report describes the iGEM competition, our project and the lack of funds that was faced by our team. It was also discussed the devices created and made by our team, as the microcentrifuge, made from MDF panel, and a DNA electrophoresis buffer tank, made of acrylic. This report was published in print edition and online, shared in academia through a workshop, reaching brazilian researchers and students from the Univesity.

All these press coverage have significantly contributed to the crowdfunding (you can read more in the crowdfunding link) and increased group visibility. The reports were also shared in our social media, and the received positive comments encouraged us to keep our focus on the project and face the obstacles.

During the project development our team launched two crowdfunding campaigns to obtain financial support through the following platforms: Vakinha and Dodo Funding. The first is a national platform and the aim of this campaign was to receive financing by reaching out friends, family, companies, universities and people interested in science in Brazil. In order to attract investors we provided gifts according to the donated amount of money, which included stickers for credit card, bags, shirts, glasses case, a kit to build a microscope and the game of genes (developed by the team USP- Brazil in 2013). As a result, we have raised R$ 7,471.00 (U$S 2,134.00). The raised money was lower than expected, but it helped to finance lab costs and some traveling expenses of some group members to the Giant Jamboree.!

The Dodo Funding campaign aimed the international community and resulted in U$S 144.69.This money was very helpful for the registrationfand banner payments, which allowed us to participate in Fablearn Brazil 2016, a brazilian conference about digital manufacturing (you can read more about this project at human practices Gold Criteria).

During the campaign, we faced some challenges, as difficulty to promote the project and short deadline to raise funds. In order to overcome these issues, we sent many e-mails to companies, science websites, journalists, brazilian newspapers and tried to disseminate the campaign to the largest number of people as possible. These tasks enabled us to create strategies to prepare campaign material, and to understand the opportunities and responsibilities that are involved in the project marketing. Even if we did not get the money to fund the trip for all group members, we consider crowdfunding an excellent way to generate funds to iGEM project.

As we countdown the days to the Giant Jamboree, we would like to thank all the people that have contributed to the project, supported it and believed in us. We are very grateful to everyone. In return, we expect to bring some knowledge about synthetic biology with our project and also contribute to the brazilian science. Here follows the name of the ones that supported us: