The expanded characterization of N-acyl homoserine lactone (AHL) systems focused on 10 main systems, which are tabulated in the Project Description. The synthetic system that our team aimed to construct split the system into a Sender (AHL synthase) and a Receiver. By separating the inducer of the AHL from the receptor, crosstalk can be determined between systems.

E. coli DH5αT was used for the construction of the Senders and Receivers. BL21(DE3) E. coli was used for induction tests. After long transformation, liquid cultures were made using LB broth mixed with ampicillin. All cultures were then appropriately digested and ligated in order to properly construct each part. A modular receiver and modular sender vectors were developed for each of the parts. The designs for these plasmids are shown below. 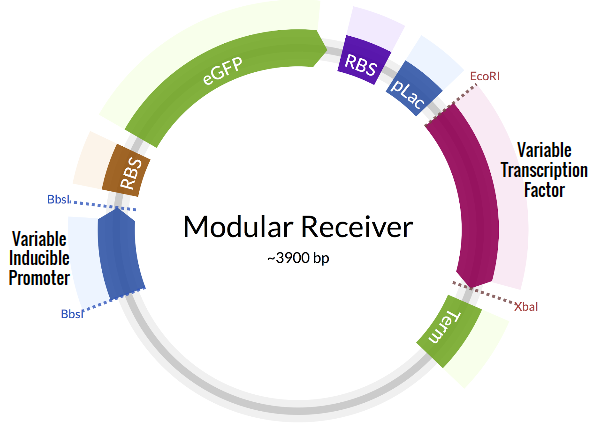 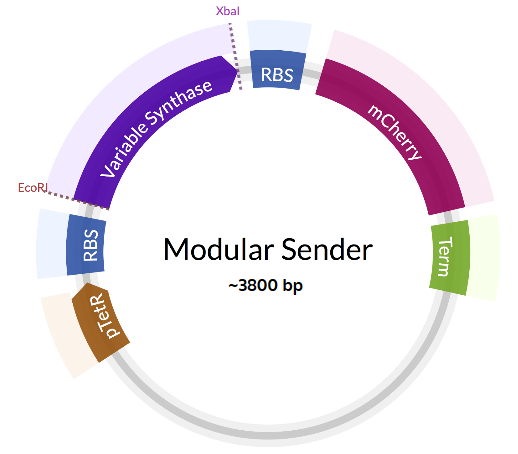 All Senders and Receivers were gel verified and sequenced with the help of the Arizona State University's Core Laboratory. After confirmation of the successful construction of each part, each part was retransformed to create sufficient stocks for later experiments. In addition, the 5 Senders that were submitted to the registry were taken out of their respective modular vectors and placed into psB1C3 Biobrick standard vector. The Modular Sender Vector was submitted within its own backbone, as it was designed with an RFC10 prefix within the part.

Initially, after the construction of the 20 Receivers and Senders, the focus of our project centered on the Aub system. This was due to the highly uncharacterized nature of the Aub system as well as possible discoveries of orthogonality between Aub and other system receivers. However, we encountered difficulties with the AubR transcription factor, which would not be highly induced in the presence of the Aub AHL. We shifted our focus to the inducers, seeking to create a part collection of 5 novel inducers that were previously unavailable in the iGEM registry. While we had successfully sequenced each of the constructed Senders, a proof-of-concept test was conducted on the inducers to demonstrate the likely production of the AHL.

The AHL gene lies behind a supposedly Tet promoter as well as an mCherry gene. If mCherry is produced, this will be a likely indicator that the AHL is also being produced. Each inducer was re-transformed into BL21(DE3) E. coli and then the liquid culture was plated on a 96-well plate in triplicate. An 8-hour optical density test was conducted on the 96-well plate, measuring at a wavelength of 600nm to demonstrate overall cellular growth and between 580-610nm to measure mCherry fluorescence. The growth curves of all ten systems are shown below: 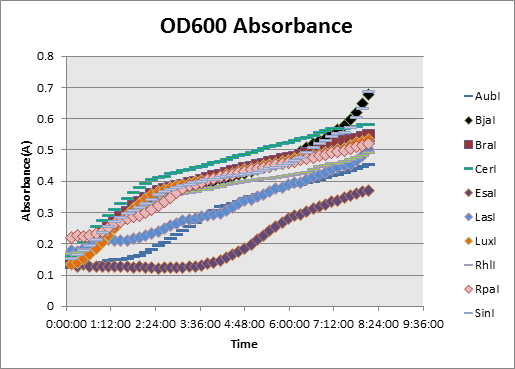 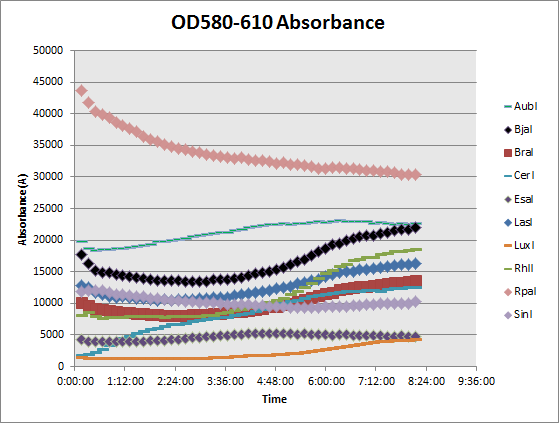 The figures above demonstrate that when the AHL synthase gene is grown in E. coli, the AHL is likely produced. The OD600 measurements affirm that bacterial growth occurred over the 8-hour read. All 10 systems produced mCherry, with 9/10 systems showing a positive growth trend over time. The 10th system, RpaI, had a negative trend in mCherry presence but also had, by far, the highest overall absorbance of mCherry. It is likely that there is a threshold to the mCherry production, which was reached by the Rpa system. Several systems, like Bja and Las, showed an initial dip in mCherry production during the first two hours of growth. This was likely due to the transfer of cells from an aerated, incubated environment to 96-well plate. This corresponds to the slight flatline at the beginning of several of the growth curves in the OD600 measurements. These results provide a proof-of-concept that the Senders are able to produce AHLs in our selected chassis, as mCherry lies downstream of the Sender in our system, so the AHL is likely produced.

In order to confirm that the AHLs were actually being produced by E. coli, we will run a 30 minute gas chromatography test to characterize any AHLs present. Due to time constraints, we will only test the 5 Senders that we submitted to the registry (Aub, Bja, Bra, Cer and Sin). In addition, these 5 Senders will be tested using mass spectrometry to further measure AHL production. This data will be available on the parts pages of each Sender, which will confirm that the AHL is being produced within our chassis.

In order to begin testing of our Senders, we plated the Senders in BL21(DE3) E. coli alongside a positive GFP control, F2620 (LuxR), and a negative receiver control. The positive control was used as a visual standard for GFP expression in F2620, which, if shown to fluoresce, meant that induction by the AHL Sender was occurring. The 10 induction plates along with a negative sender control are shown below:

From these results, it can be shown that 8/10 systems induced F2620, with Las and Sin being the two exceptions. Las was shown to induce by the Canton Lab(2008), so the lack of induction could be due to a molecular diffusion issue. Fluorescence found in the middle of the plate by the Senders themselves was likely due to mCherry production, which was constitutively produced alongside the AHL. A more comprehensive induction test using a plate reader was done afterwards to test these results. Of the 8 systems that induced F2620, Esa showed the greatest level of induction, even greater than that of the native system Lux. This is likely due to the fact that Esa and Lux produce the same AHL molecule and the Esa construct may be more capable of efficient AHL production than that of Lux. The images gathered suggest that many of these systems are not entirely orthogonal to Lux, and that some degree of crosstalk will occur between these networks. SinI remains the top candidate for orthogonality with F2620.

Once the production of AHLs by the Senders was tested via the OD test and gas chromatography as well as induction plates, the direct interaction between the Senders and the well-characterized Bba_F2620 by Barry Canton and Anna Labno from MIT was tested. This system originates from the Lux system and is well-understood, which will likely provide the most immediate utility. This test will aim to determine orthogonality between the Senders and F2620 while also providing a direct comparison between systems' inductive capabilities.

The Induction test was done by extracting AHLs from the supernatant of a liquid culture and then plating with uninduced cells. This was done at a 10% and 50% AHL concentration, as well as 3 negative controls and 1 positive control. All samples were done in triplicate. The setup is shown below: 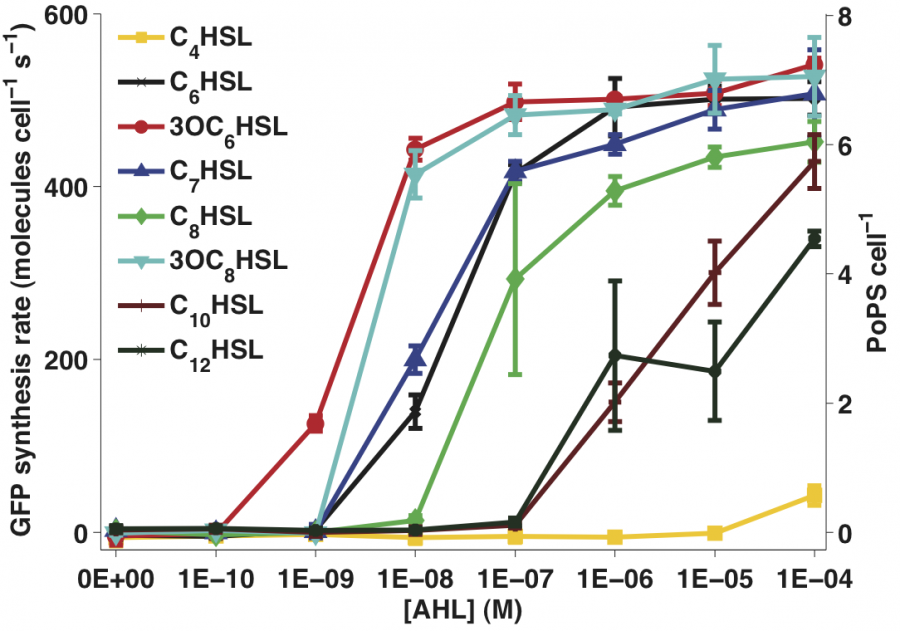 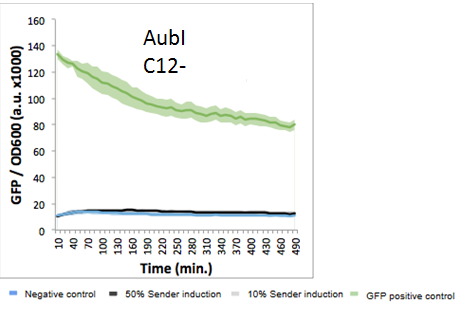 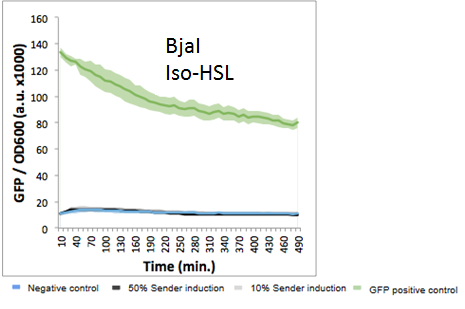 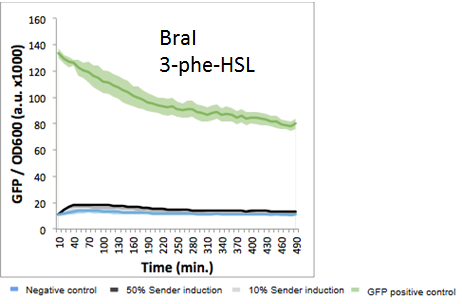 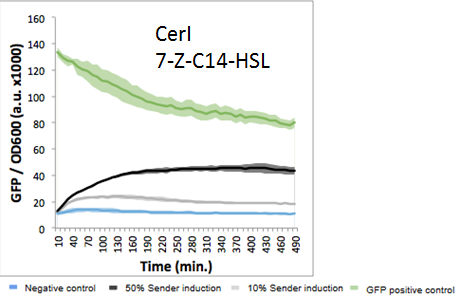 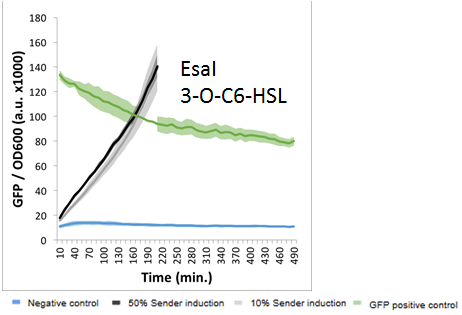 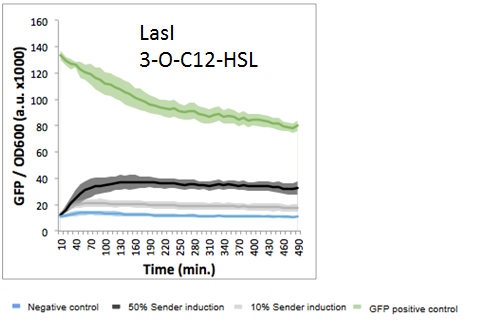 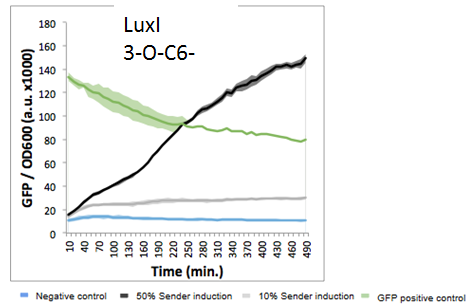 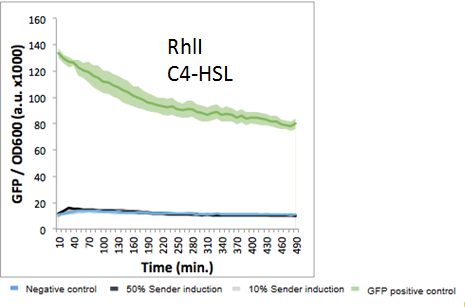 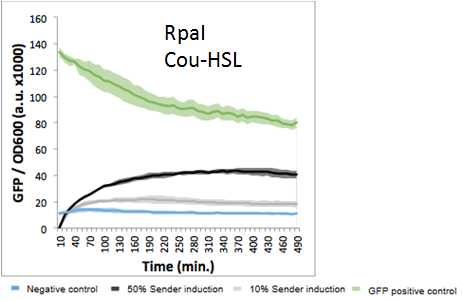 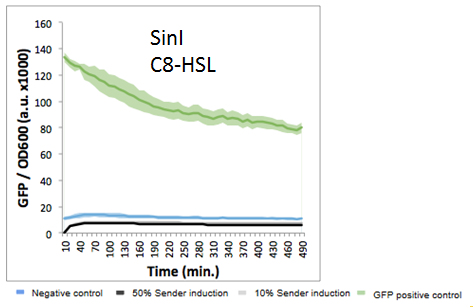 The figures above demonstrate a mix of orthogonal and intersecting(crosstalk) networks. Of the 10 systems measured, known crosstalk partners such as Esa, Las, and Rpa showed increased levels of GFP measured as compared to the F2620 control. Lux, the native system that F2620 was designed for, Las, Rpa, and surprisingly Cer showed an exponential increase in GFP absorbance with an increasing concentration, with much higher levels of absorbance at the 50% AHL concentration as compared to the 10% AHL concentration. Overall, Cer, Esa, Las, Lux, and Rpa showed a significant increase in GFP absorbance over the F2620 control, indicating some degree of crosstalk with F2620.

Meanwhile, the Aub, Bja, Bra, Rhl, and Sin systems showed evidence of orthogonality to F2620. All 5 systems maintained GFP absorbance levels near the F2620 control. BraI showed a slight increase in absorbance, making it difficult to conclude the level of interaction between the BraI AHL and F2620. SinI had lower absorbance levels in the sample runs than the F2620 control, but still remains in the margin of error for the plate reader. From solely these results, Aub, Bja, Rhl, and Sin are the strongest candidates to be orthogonal to F2620, with both AHL curves consistently close to control absorbance levels. Combining these results with the previous induction plates strongly suggests that Sin is an orthogonal system to Lux.