The record player has been rescued, the incubator designed, and the microbiome records fabricated. Now, time to bring everything to life!

First, is the question of how microbiome samples from different parts of the body grow, in various conditions. During this phase of experimentation, we attempted to culture the microbiome on various mediums at different temperatures, ultimately settling on a solid agar medium and a combination of incubation and room temperature settings.

Then, how to replicate these results on our unique record plates? This second part involving the pouring of the agar medium into these plates, and then replicating results once more, but at the community lab.

All materials, such as glassware and acrylic record dishes, were disinfected with Kimwipes soaked in isopropanol; additionally, all lab members wore disposable vinyl gloves when handling all chemicals and other materials.

In a 1 liter glass bottle, 25 grams of LB and 15 grams of agar were added to distilled water to create a 1.5% agar medium. The bottle was capped, inverted, and shaken to mix the solution thoroughly. The solution was microwaved for 30 second intervals until boiling, and intermittently stirred to ensure proper mixing. After the mixture began to boil, it was microwaved for an additional 20 seconds (beware of splashing), and then removed from the microwave and placed in a water bath to quicken the cool-down and control temperature. Once the solution was sufficiently cooled (until a hand could be placed comfortably on the container for 5 seconds), portions of the solution were poured into smaller 80mL beakers and used to pour the medium into the plates. Disposable plastic pipettes and micropipettes were used to remove bubbles and even out medium distribution between the divisions on the plates. Once the medium solidified, lids were placed on the dishes, which were then sealed with parafilm. All plates were stored in the community lab fridge at 4°C.

Plates were inoculated with body bacteria using cotton swabs and distilled water. After dipping a cotton end into the water, the swabs were rubbed 1) under the tongue, 2) around both armpits, 3) inside the belly button, and 4) between two toes of the foot, leaving the 5th area (either one slice, or the innermost ring) empty as a control. The swabs were carefully dragged across the entire surface area of the exposed medium.

Alternative mediums to LB agar were tested- gelatine, pectin, and combinations of the two. However, they did not maintain a solid consistency at 37C so were abandoned.

Prior to plating our records with cultures from our bodies, an initial set of tests in standard petri dishes of LB agar were conducted. A variety of sites from the body were swabbed and plated into separate petri dishes to examine for visual variability, including color, size, and quantity. This was done first to determine that cultures from our body could live in LB agar and to determine which sites on the body to use. Images from this process are below.

Standard protocol listed above was used; an unswabbed plate was a control. It should be noted that on October 10th, we forgot to photograph the control plate, but there was no growth present, the desired result.

From the initial experiments it was known that growth from the mouth and toes occurred within 24 hours, which was desirable for the purpose of quick prototyping. The collarbone, armpits, and belly button did not show growth as quickly, but the armpit and belly button were kept for great contrast to the fast growing body regions. 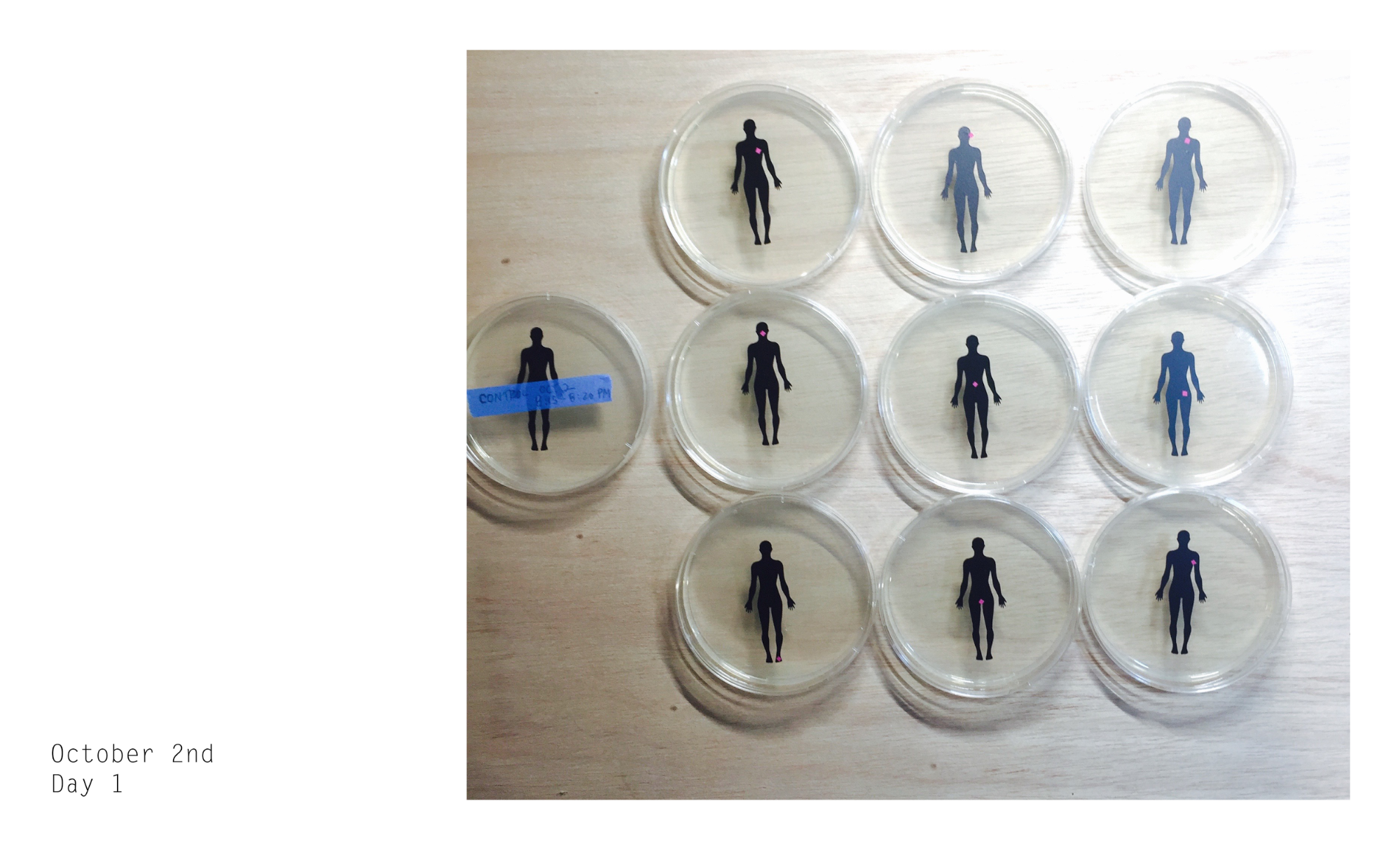 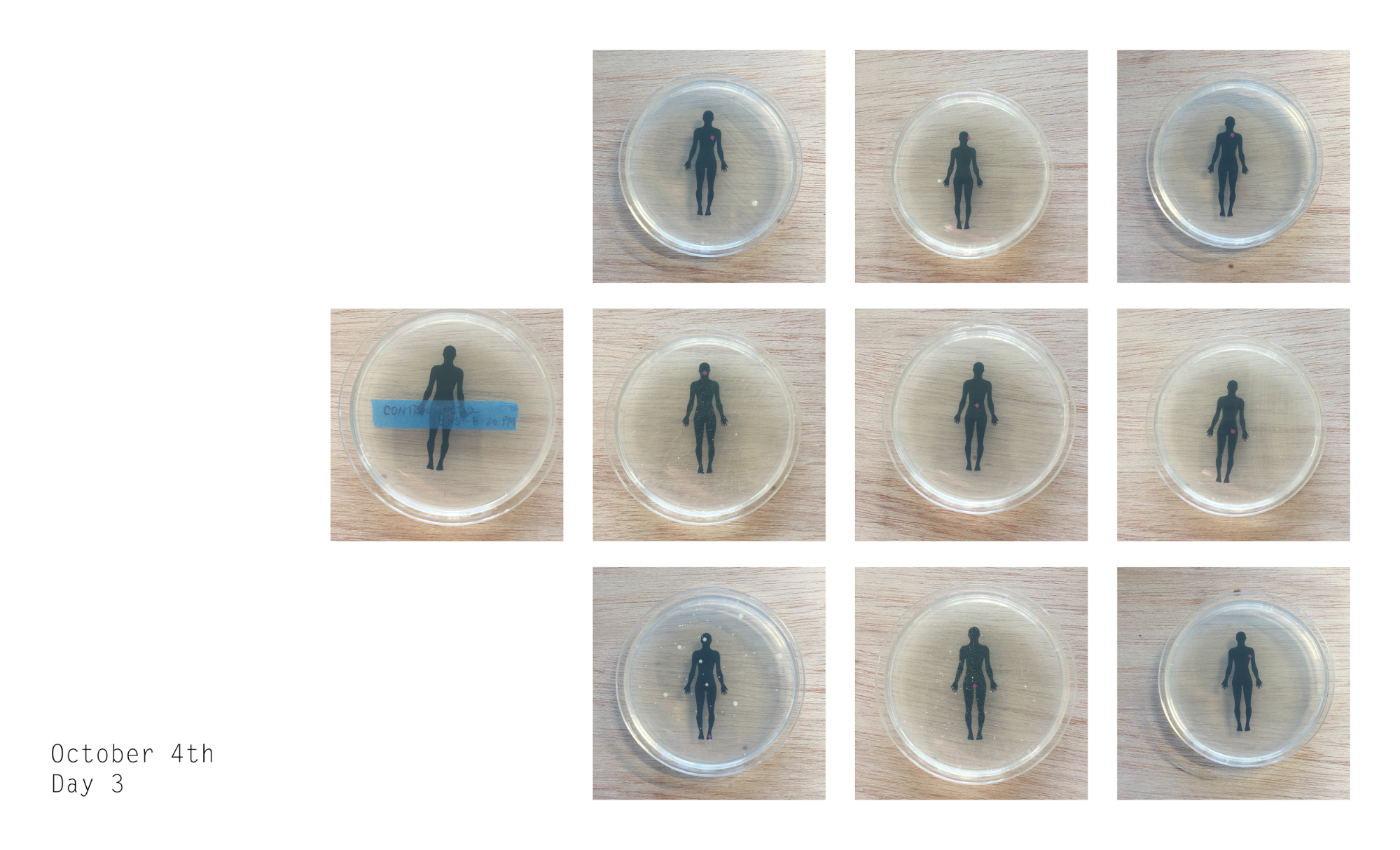 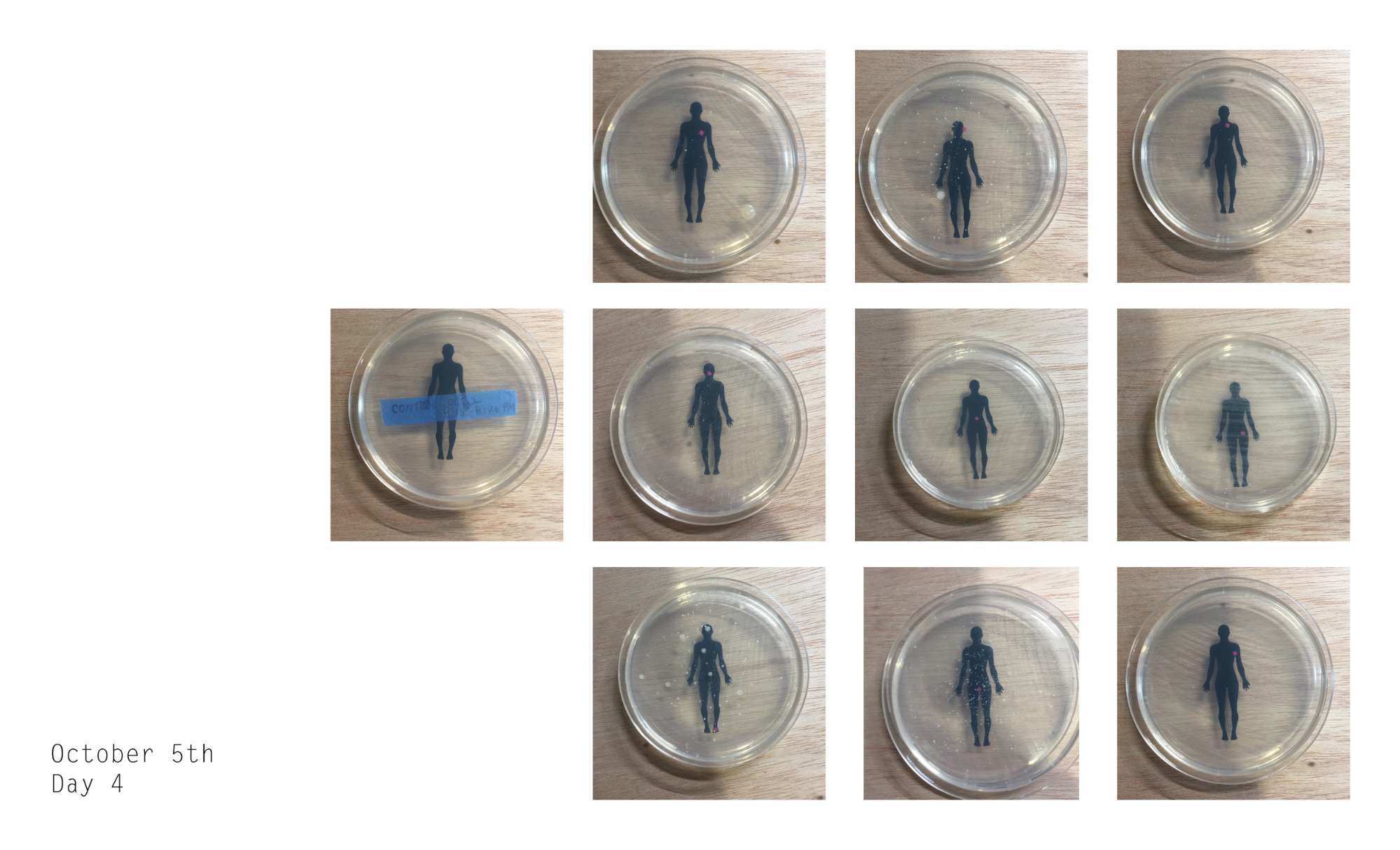 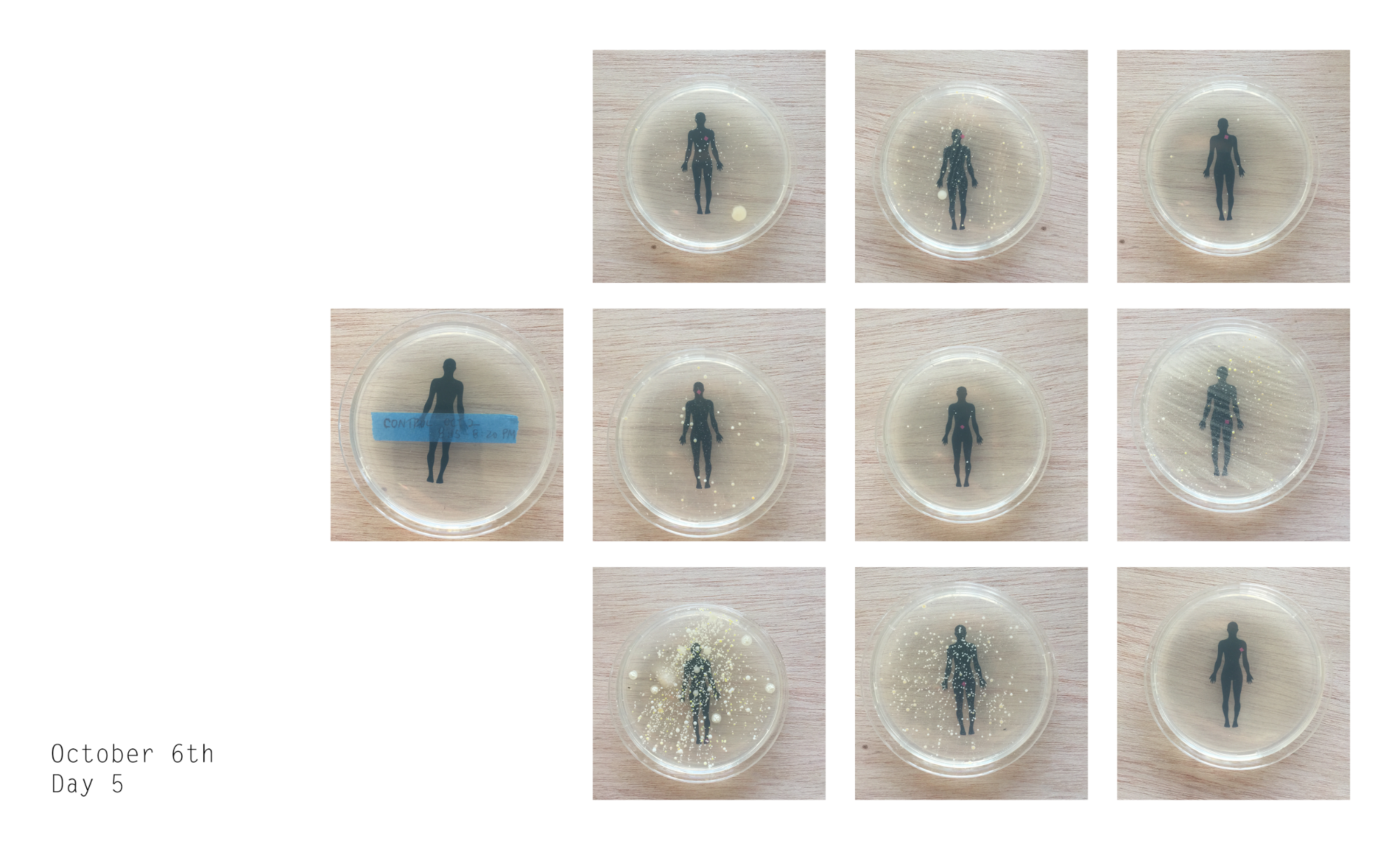 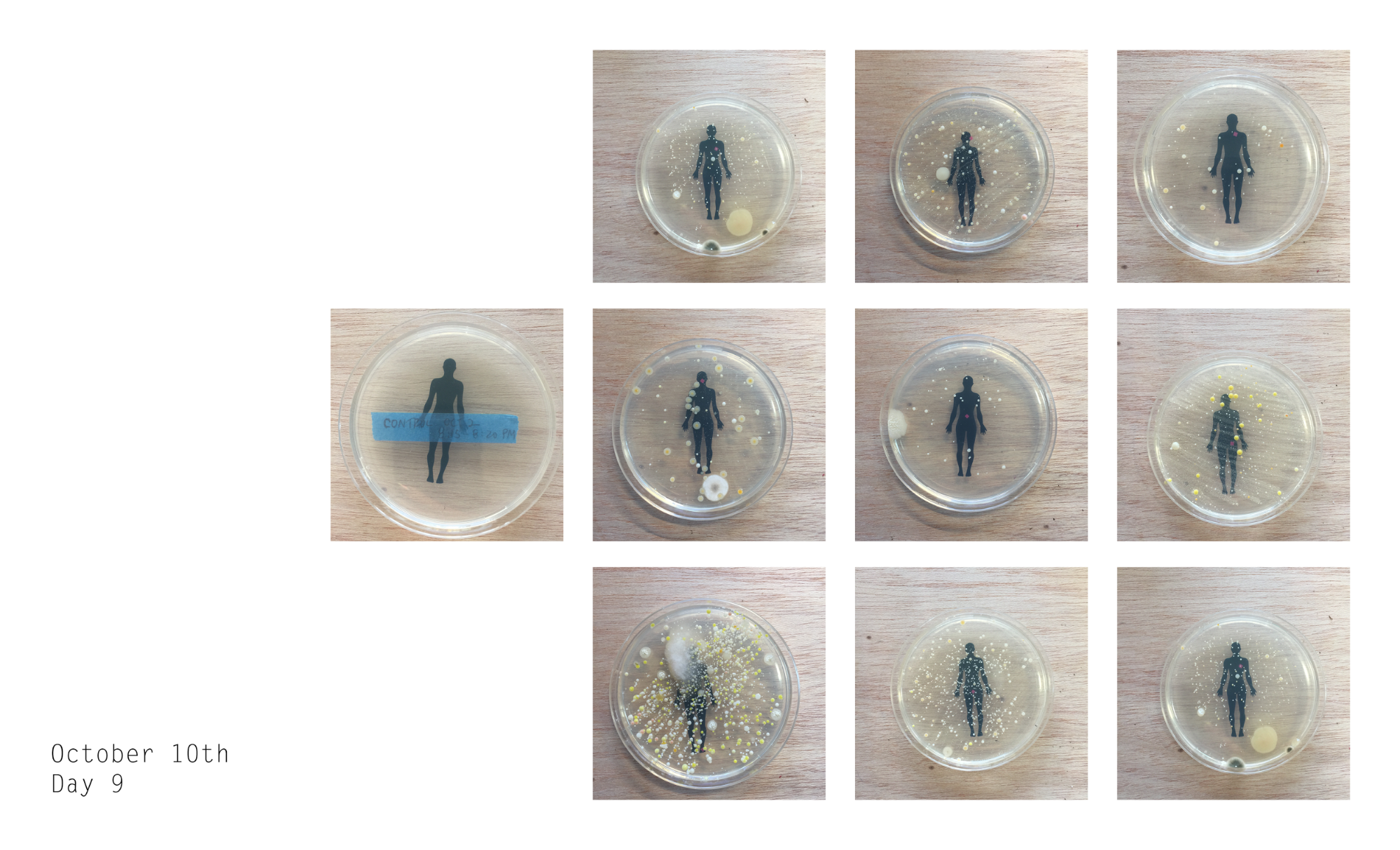 We made a standard agar+LB solution by mixing ____ and used microwave to heat it up. We cooled the solution in a 40C oven. Keep in mind that whatever material you’re using to fabricate the plates to check the melting temperature. Our acrylic would withstand up to 40C, so after cooling in the oven, we allowed the solution to cool even longer - but not to the point of the agar hardening !!! 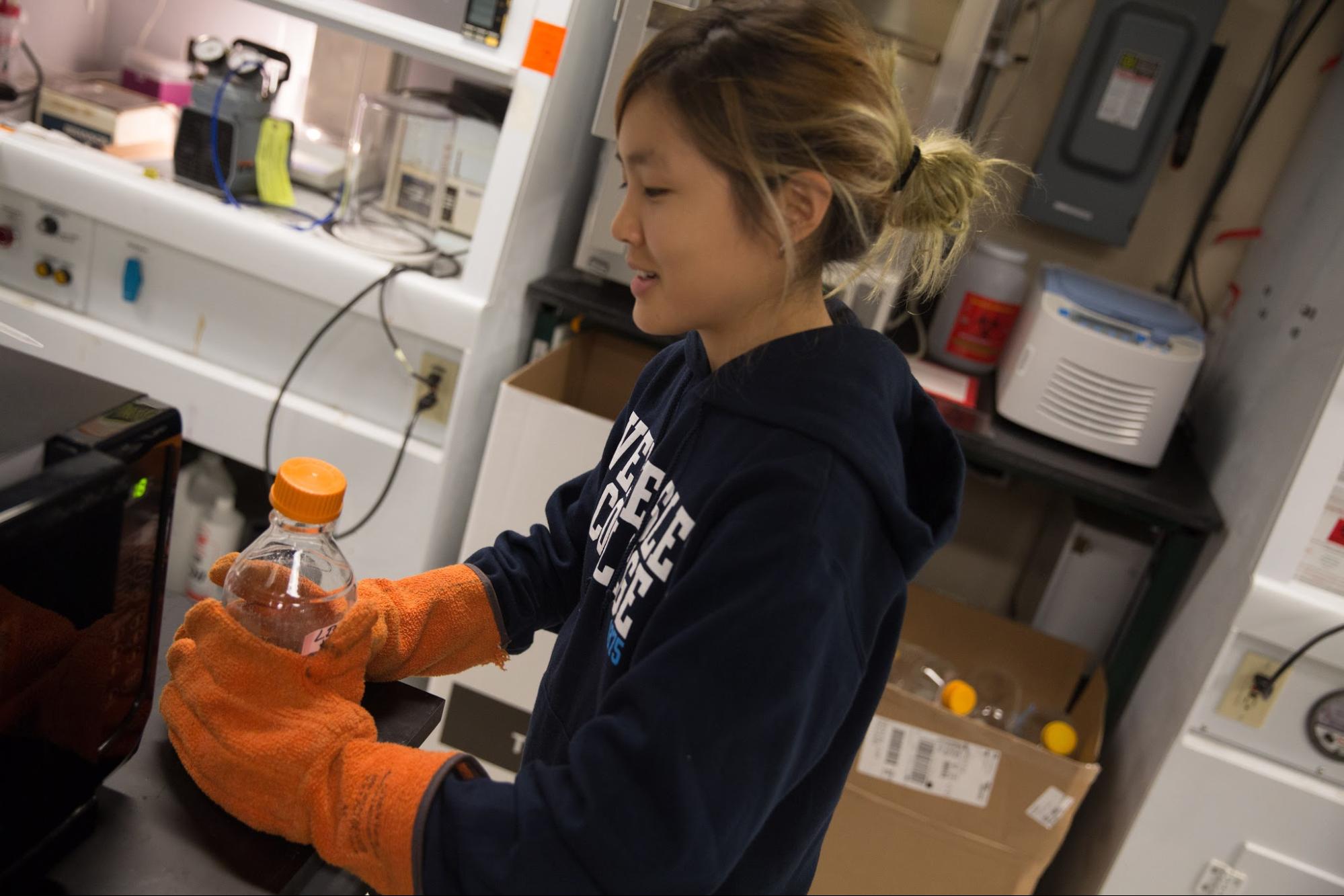 Staying safe and fashionable with gloves, while heating up agar medium in the microwave. 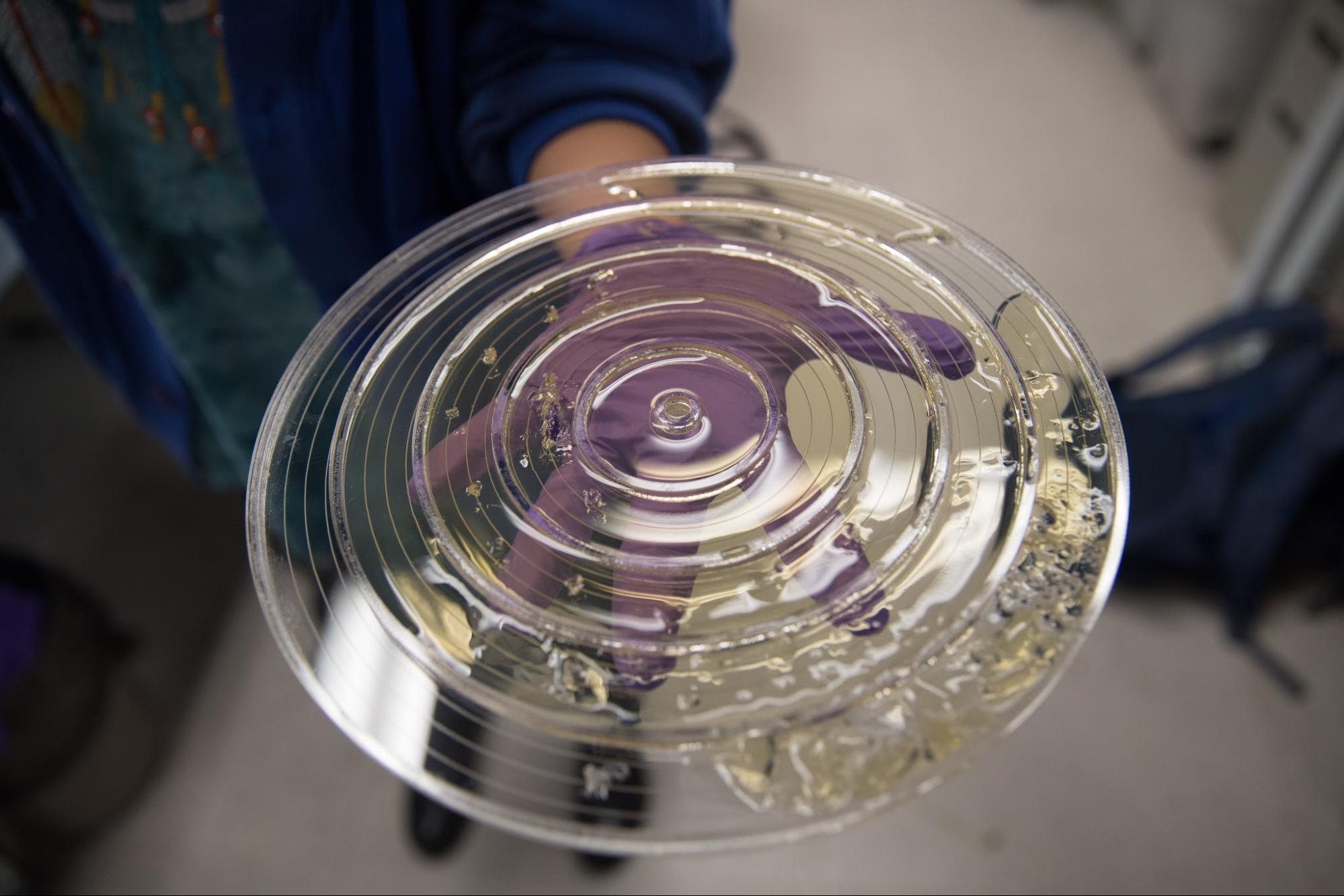 When pouring the agar, only pour up to halfway to the top. It is easy to accidentally get some agar on the the edges and tops of the dividers of the sections. Try to wipe this off, as microbes will grow on these edges (unless you are interested in how microbes from different bodily sites interact with each other).

Four bodily sites were sampled: the mouth, the armpit, the belly button, and between the big toe and second toe. A sterile cotton tip was dipped in DI water prior to swabbing the bodily site. For the large sections of petri dish (such as the 12” concentric design), multiple swabs were made to the same bodily site to cover the entire area of the dish. Both the concentric design and the consecutive design dishes were plated with the same corresponding bodily site for comparison. We wanted to know if the distribution of microbes mattered in its growth and therefore sound. 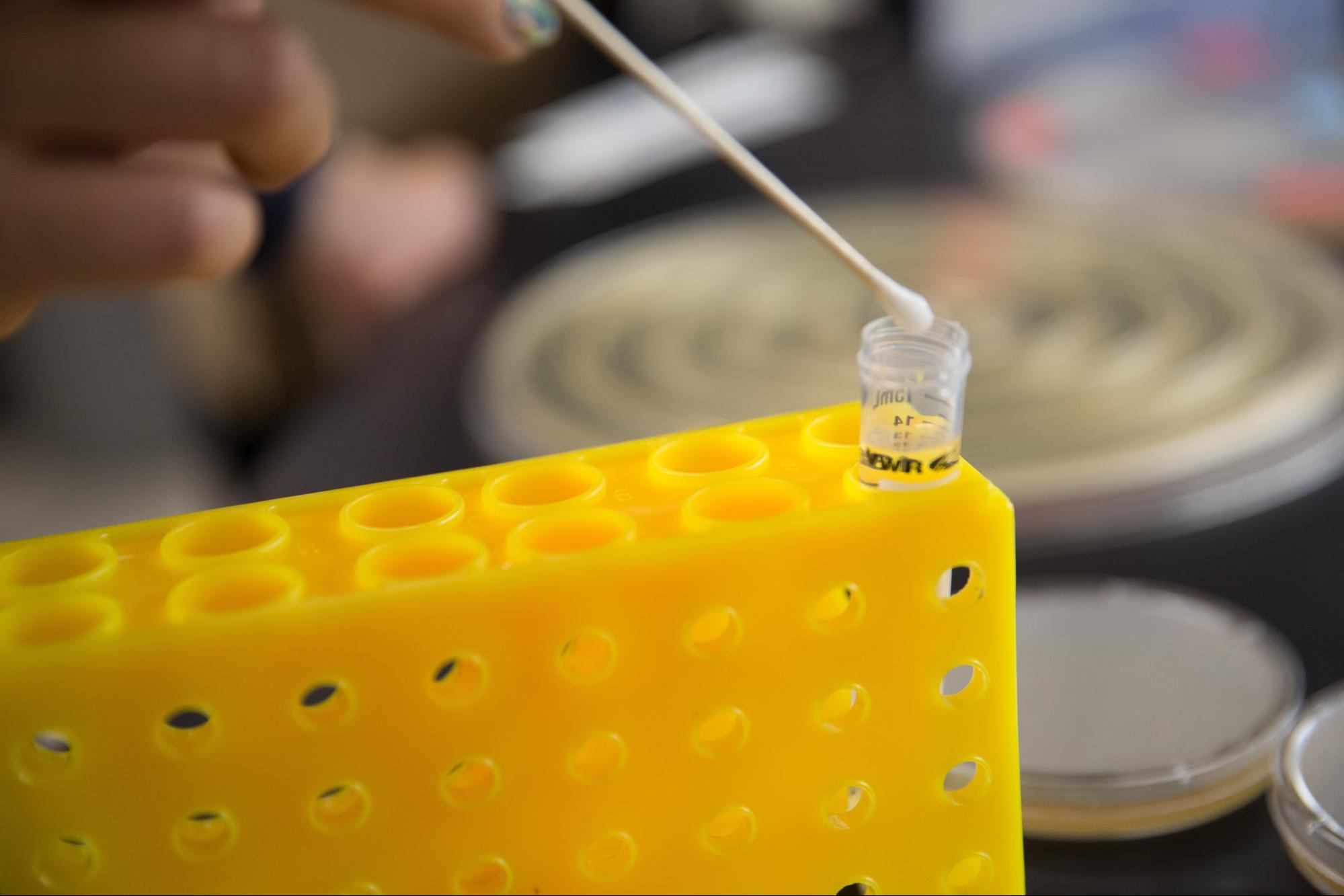 Make sure to dip the cotton swab in DI water before swabbing your body! 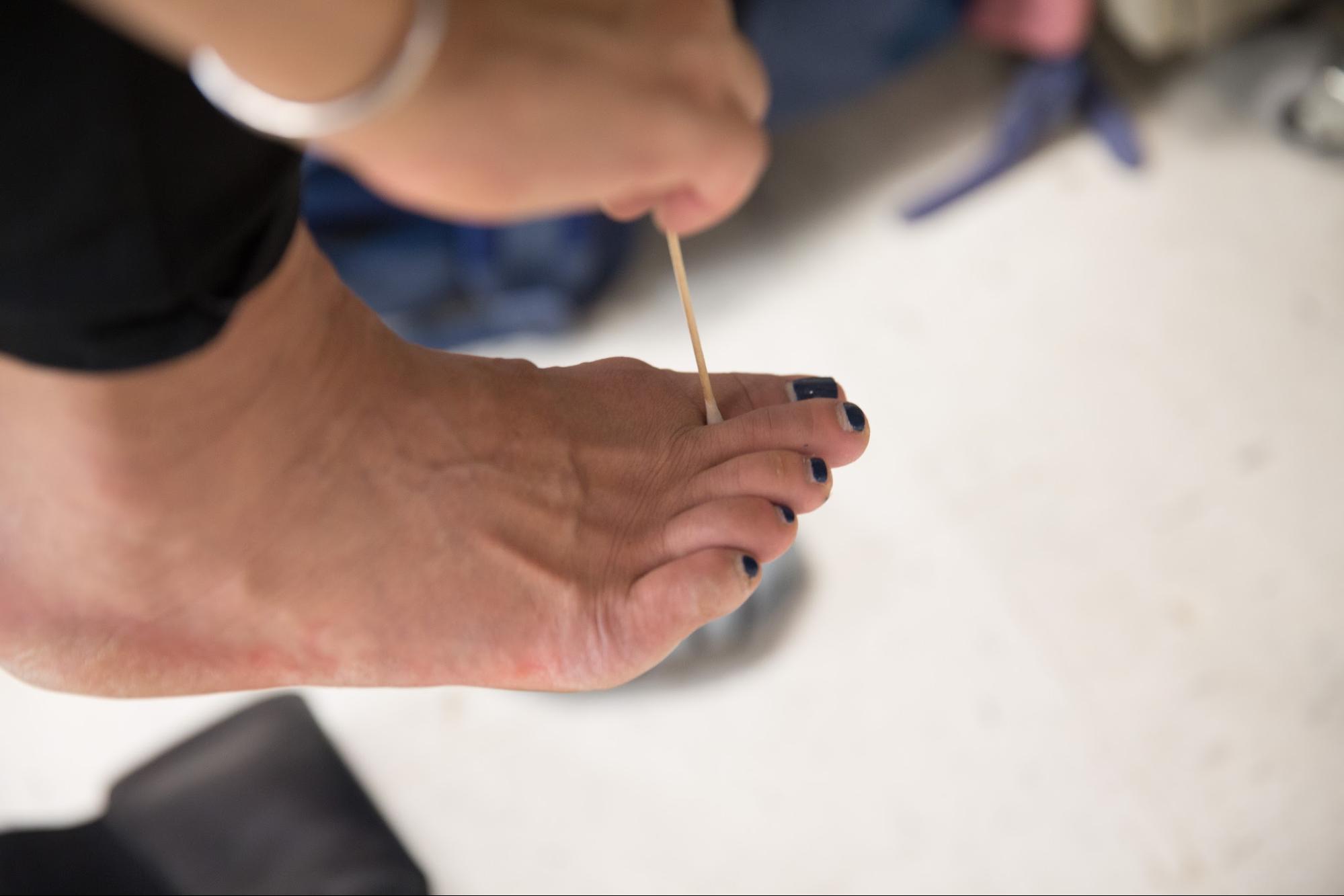 Sampling from all over the body, for head-to-toe coverage. 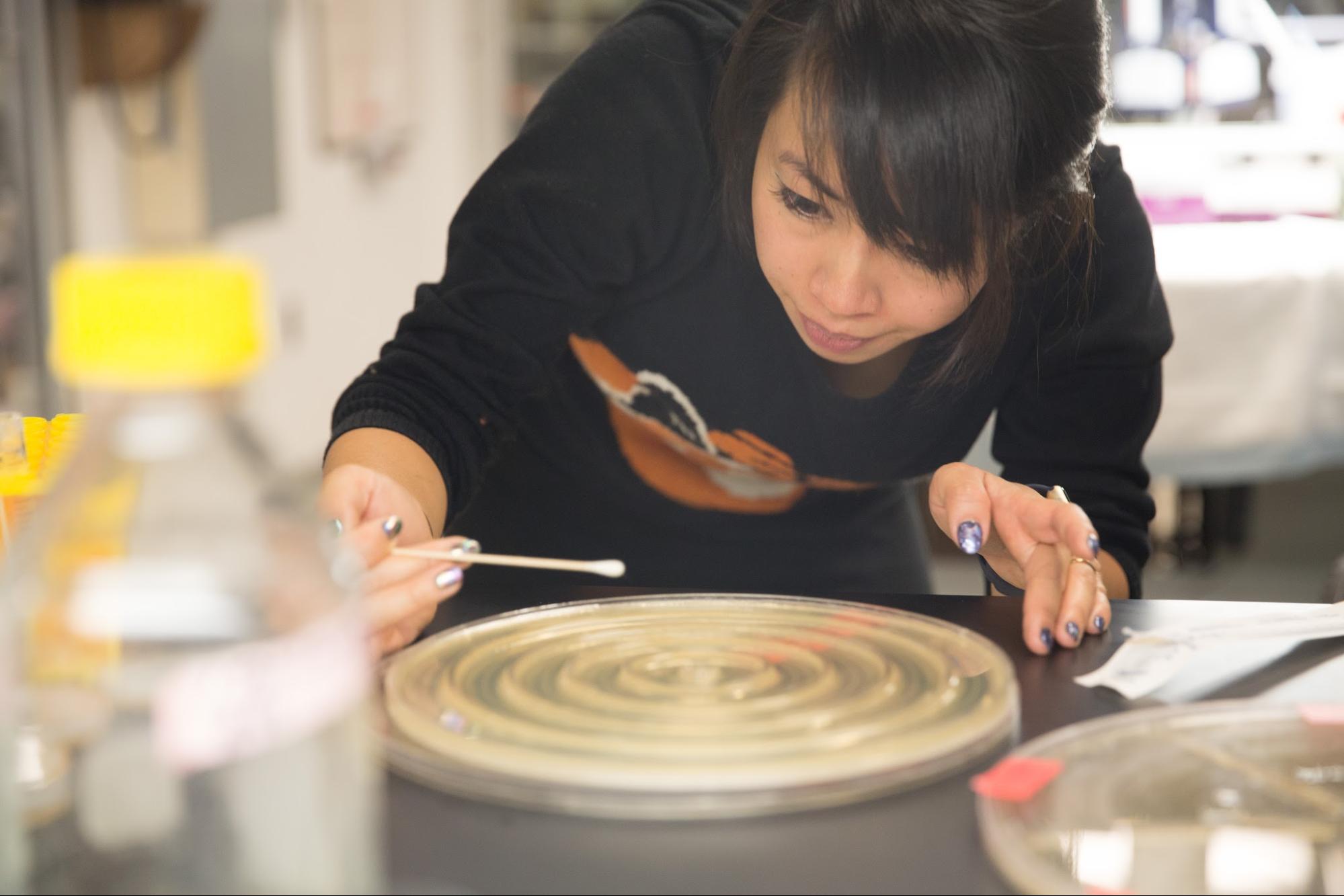 Preparing to spread a lawn of bacteria upon the plate. 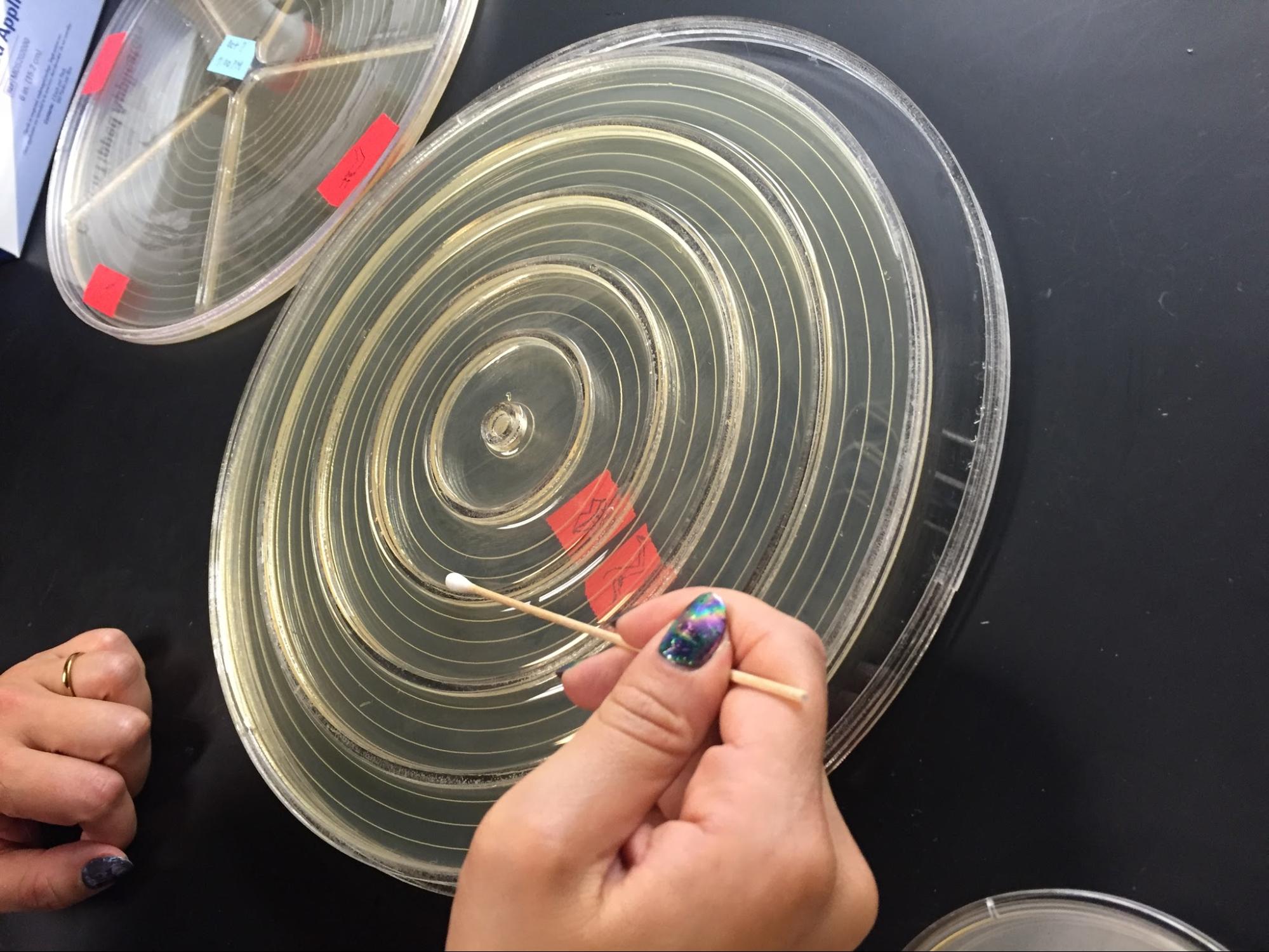 A 12’’ concentric plate, complete with agar and ready for swabbing. 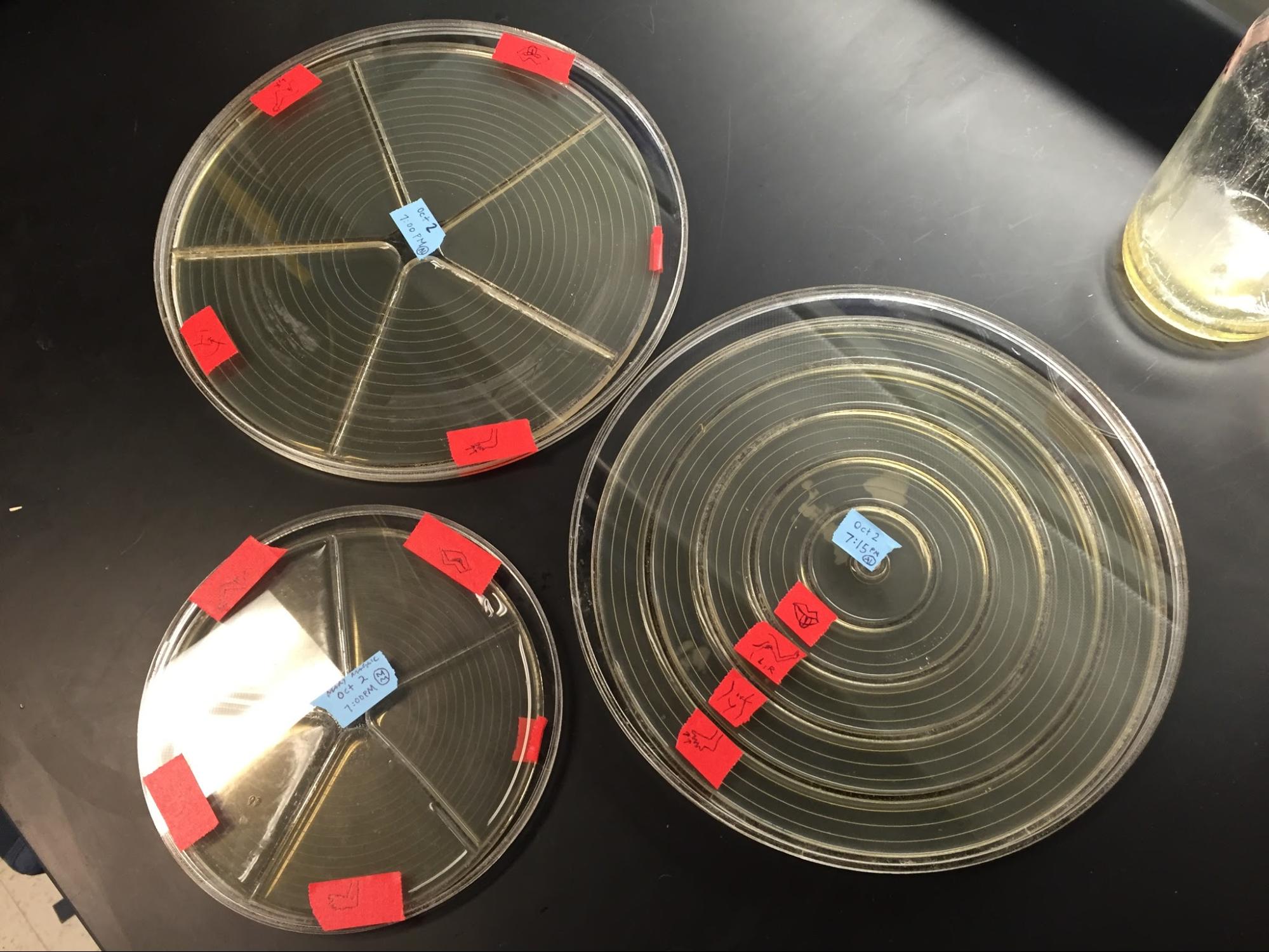 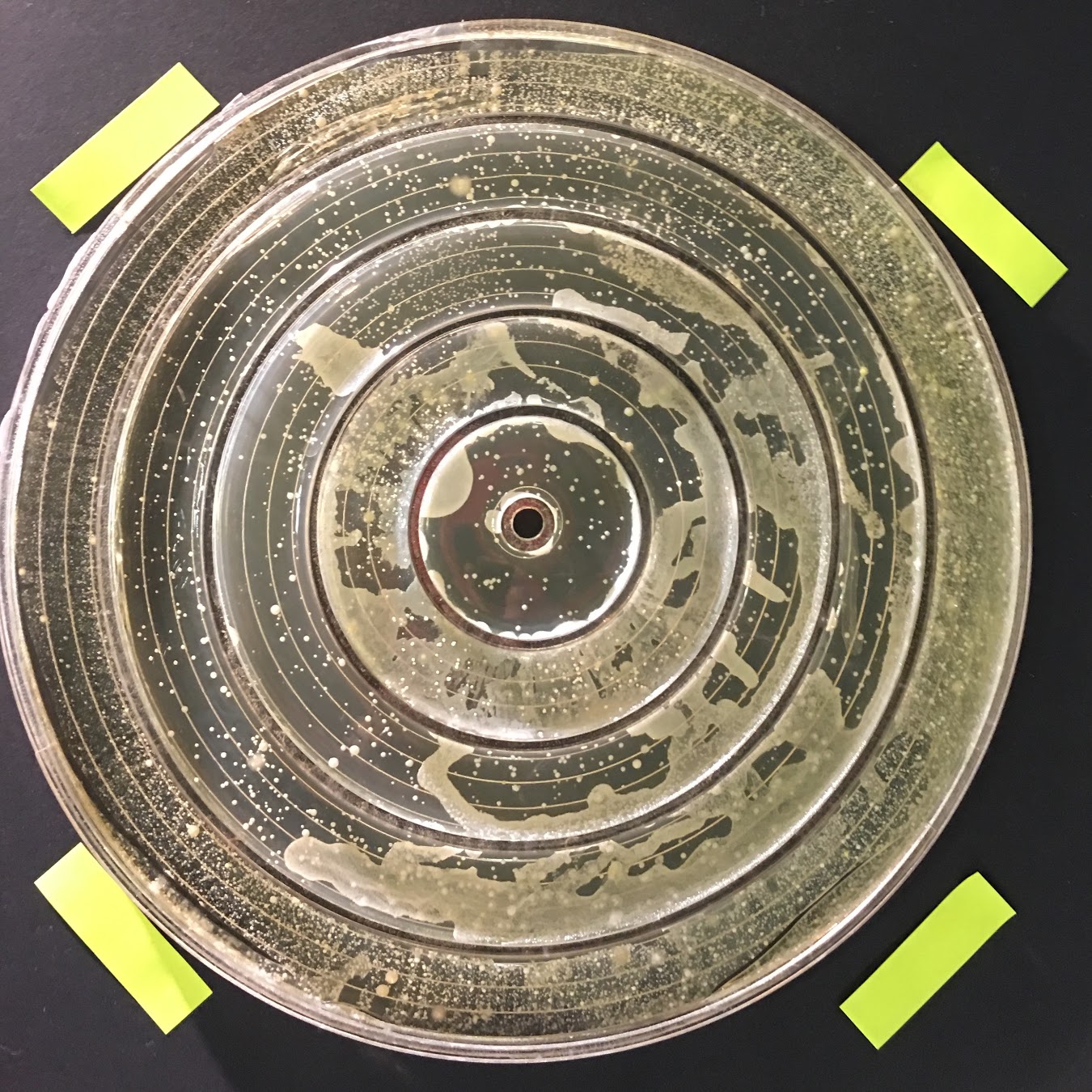 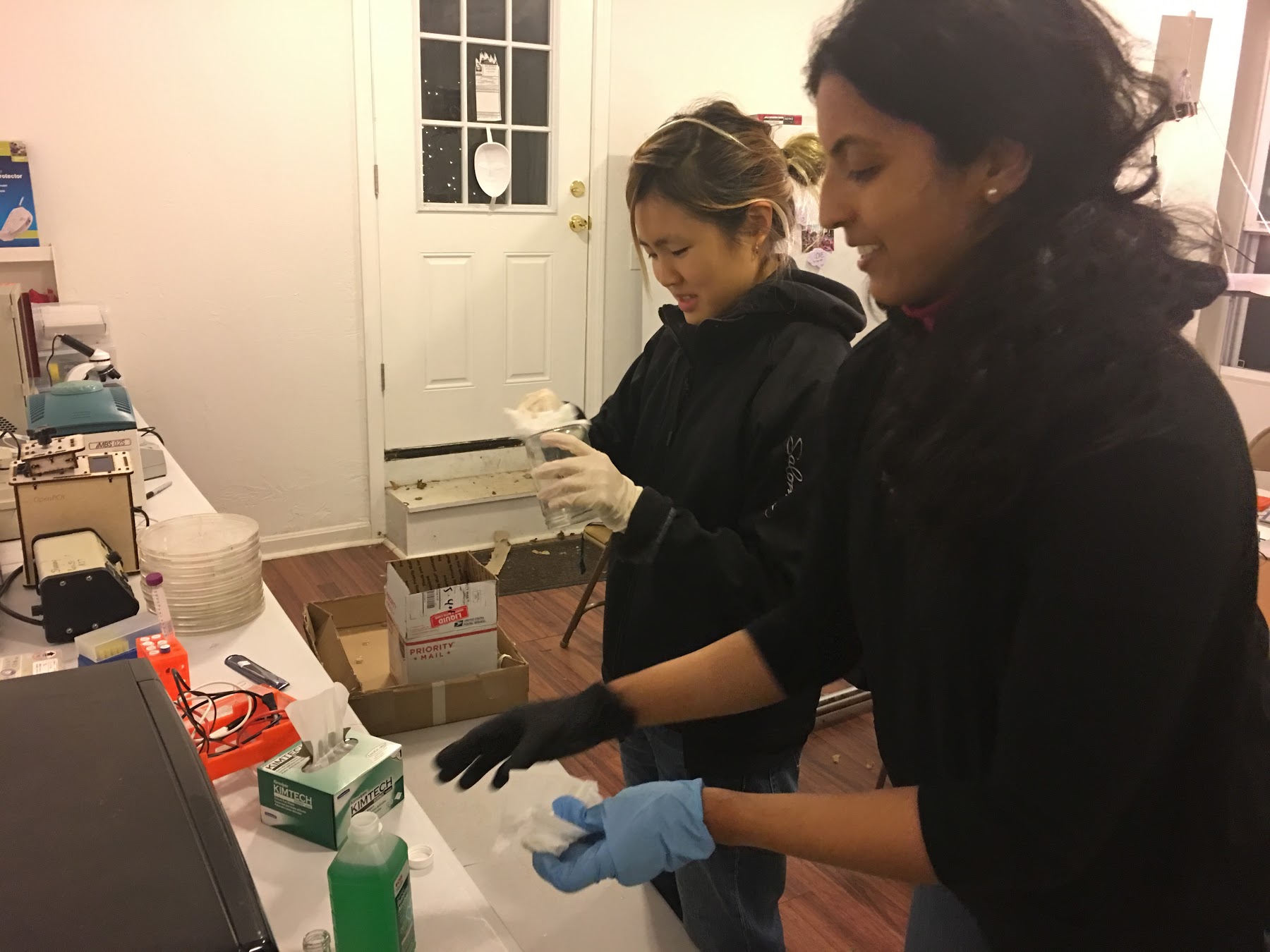 Pictured is our community lab, where we poured the remainder of our plates. We created a batch of 1.5% agar medium (see protocol) and began pouring them onto both the concentric and radial designs, in the 7’’ size. Overall, the main points of the protocol had already been outlined--the main task was adapting them for use in the Street Bio community lab.

Sterility in the community lab environment was dealt with as much as possible by meticulously disinfecting the materials. Medium, however, had to be made fresh every day as we had no autoclave or other sterile place to store it between work sessions. Problems we had not foreseen, however, included the inability to fit our 1L flask into the microwave, and resulted in the need to microwave the medium in smaller batches. The most major challenge that the community lab space brought was the fact that none of the work surfaces available were level, resulting in many issues when pouring such shallow plates and the need to avoid cross-contamination when agar was present on the tops of the section dividers.

The first two nights then, were full of several botched attempts to pour plates due to several of the above issues. Ultimately, with a combination of micropipettes and a fume hood, most of those concerns were eventually addressed. 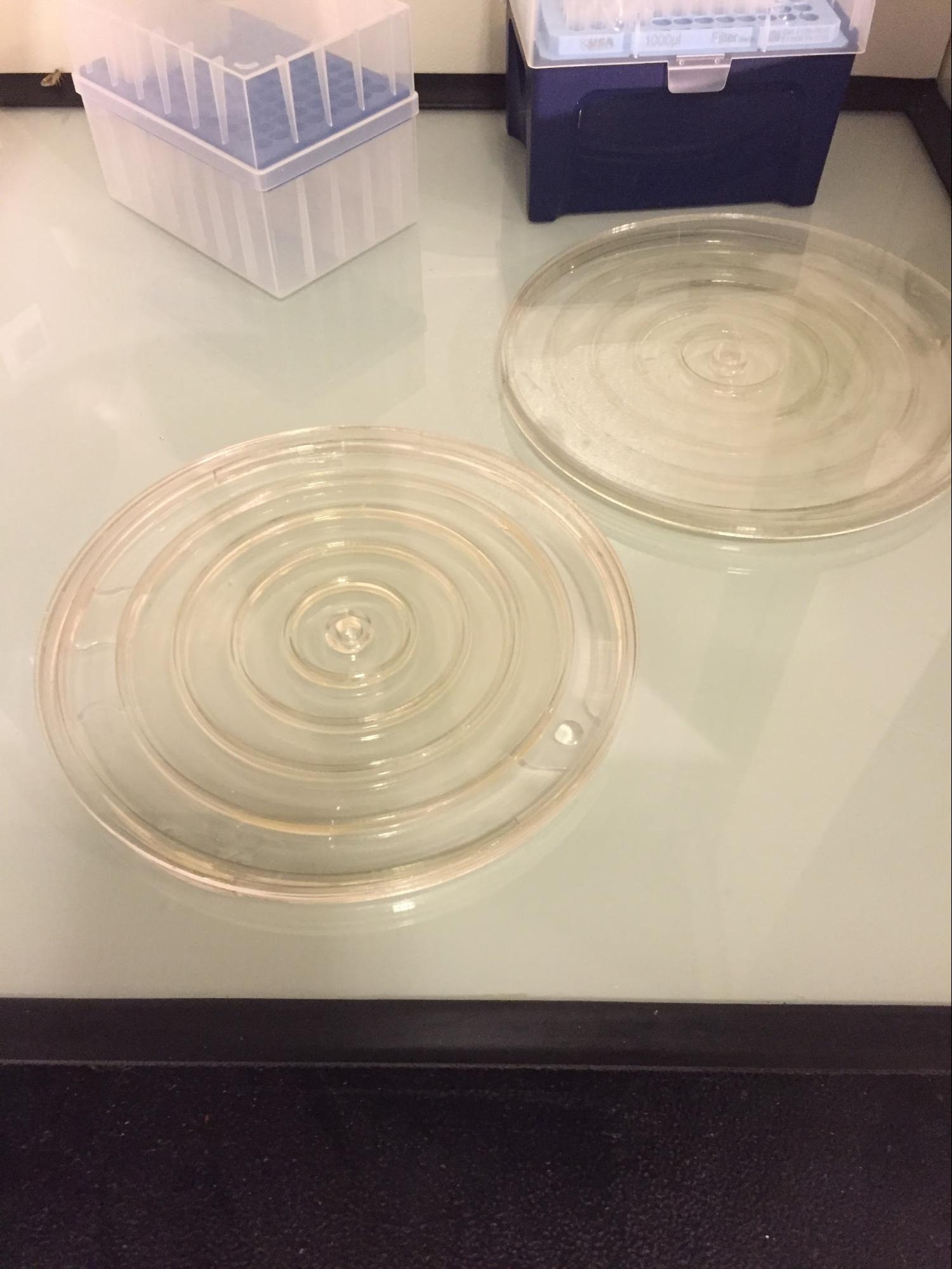 Plates were finally successfully poured! On the first of these days, however, another issue was encountered, where the outermost ring of concentric design plates were leaking and unable to hold the liquid medium (see the hardware section--outermost rings were initially cut as two pieces in order to save space on the acrylic sheets). When possible, additional acrylic glue was used to reseal these dishes; if problems persisted, however, parafilm was then used to seal these areas.

After all the plates were poured, they were each sealed with parafilm and stored in the community lab fridge at 4°C until the first meeting of the Youth Science Initiative. 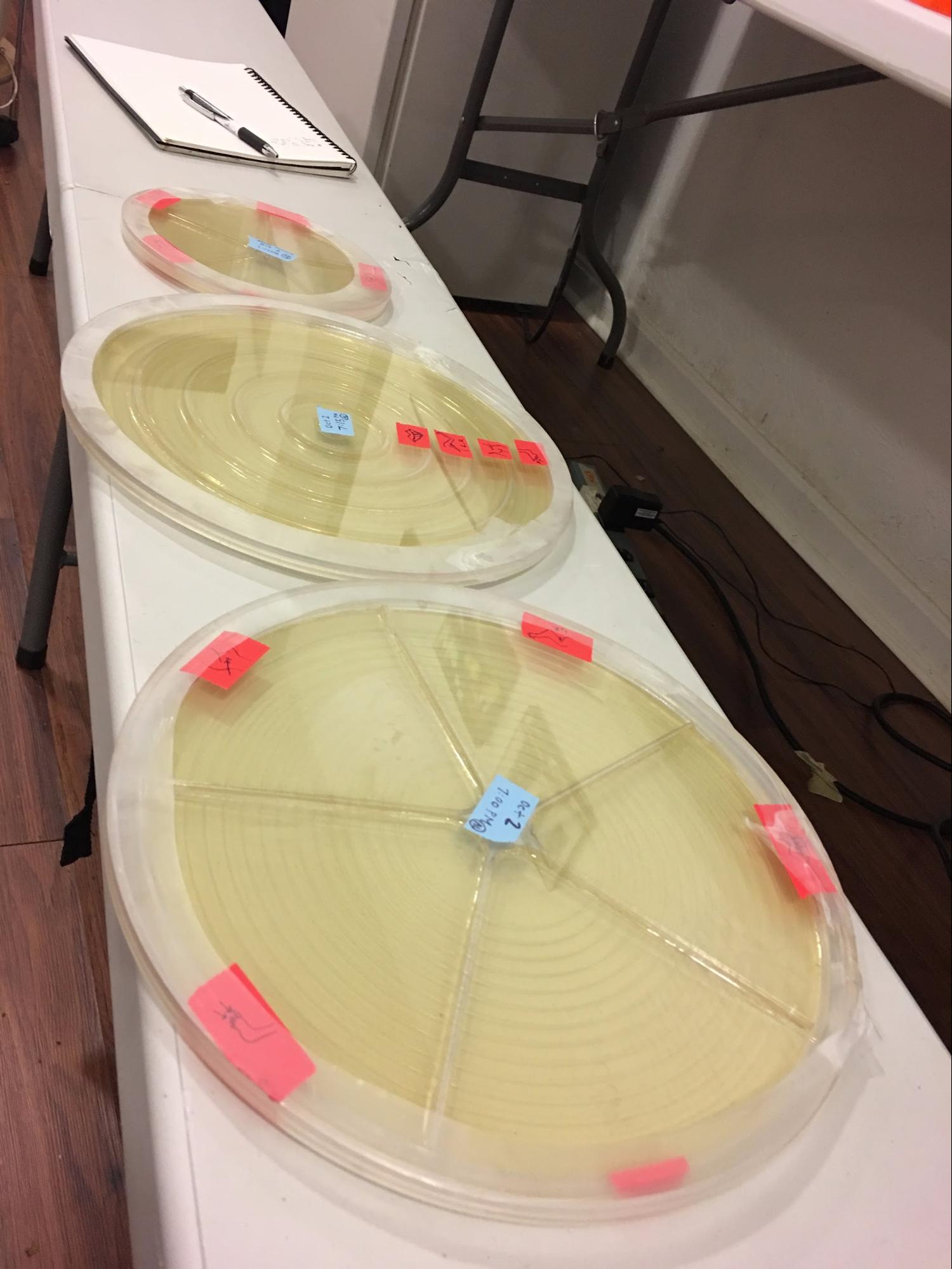 Below you can see photos from a 7th inch plate growing over four days. Inoculated on 12th October 12:30pm, first photo was taken 30 minutes after inoculation and second picture on the fourth day (16th October) 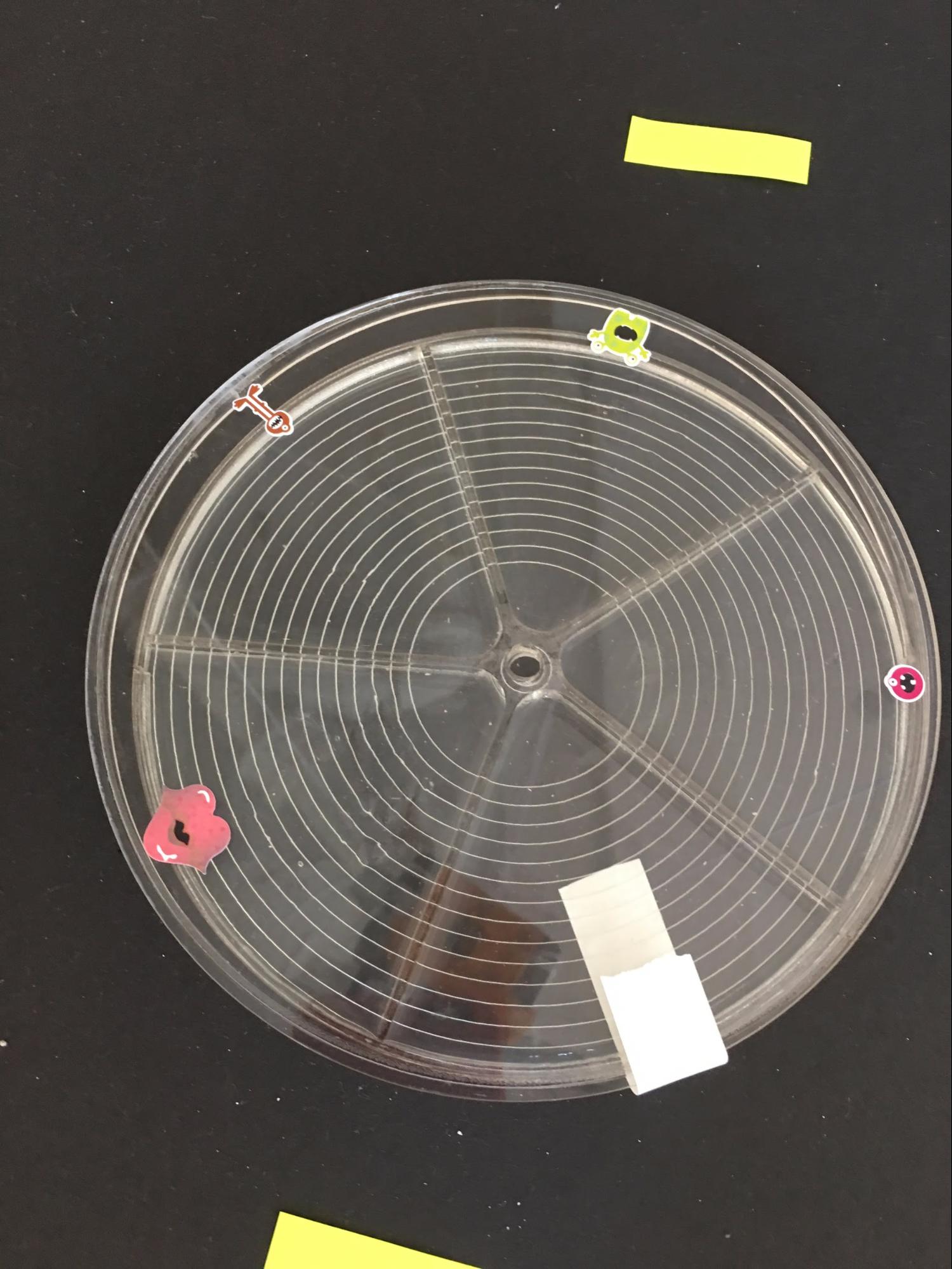 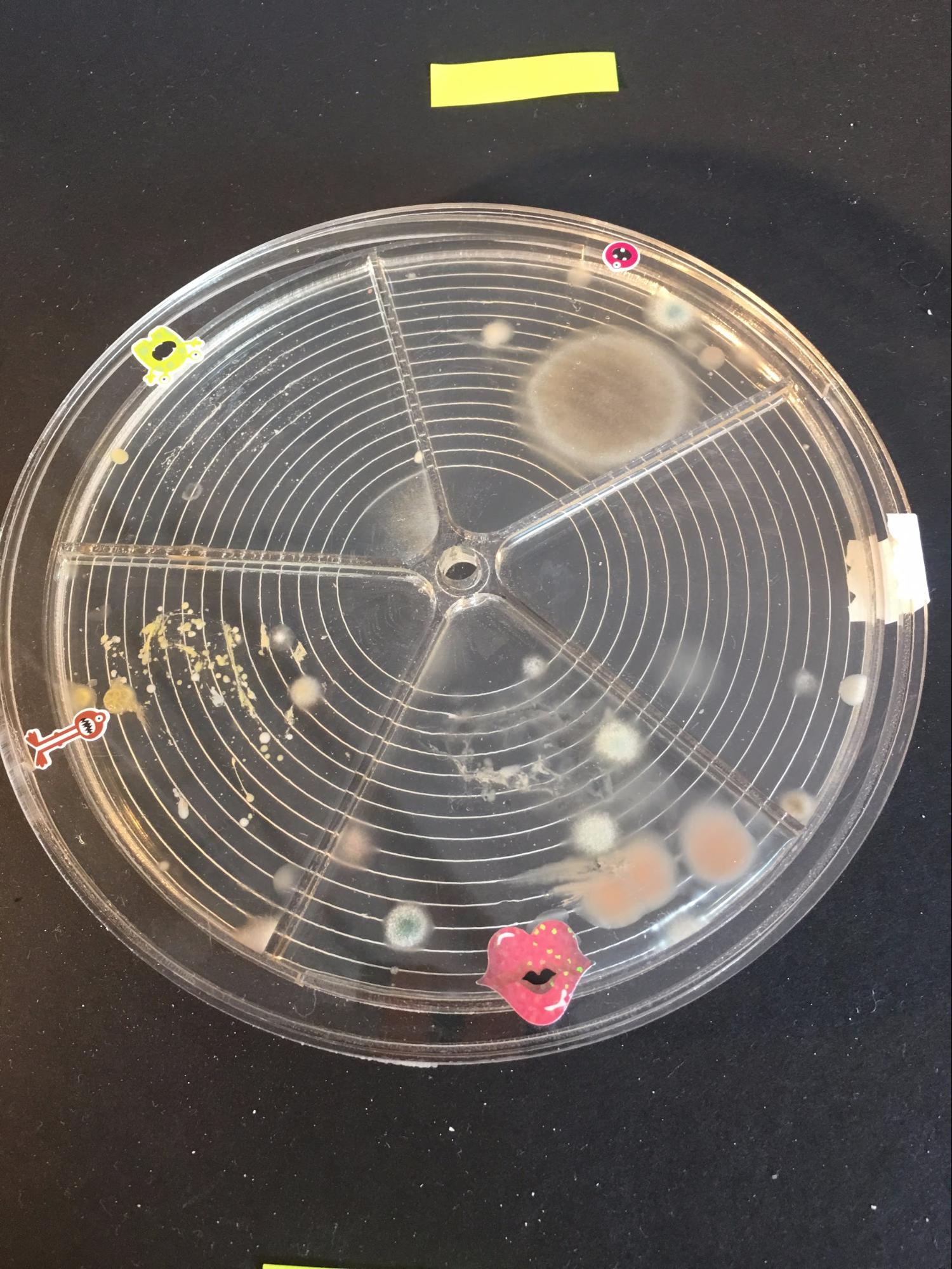