The idea of iGEM Blood Alcohol Meter (iMeter) we developed was inspired by a household appliance – Blood Glucose Meter (BGM). We visited the local company called BIONIME near our school campus in Taichung. BIONIME is an innovative expert working on BGM and other domestic health care systems. We invited the executive vice president, Dr. Wiley Chung (Shie-Shiun Jung) to school to help us develop the blood alcohol meter. Dr. Wiley is a professional electrochemistry expert who has created a brand new electrochemical simulator called Zensor Simulator and established a spin-off company, Zensor Research & Development Corporation (Zensor R&D Corp.). The following is the lecture we recorded and the electrochemical modeling experiment performed on the day he visited us(August 25th, 2016). 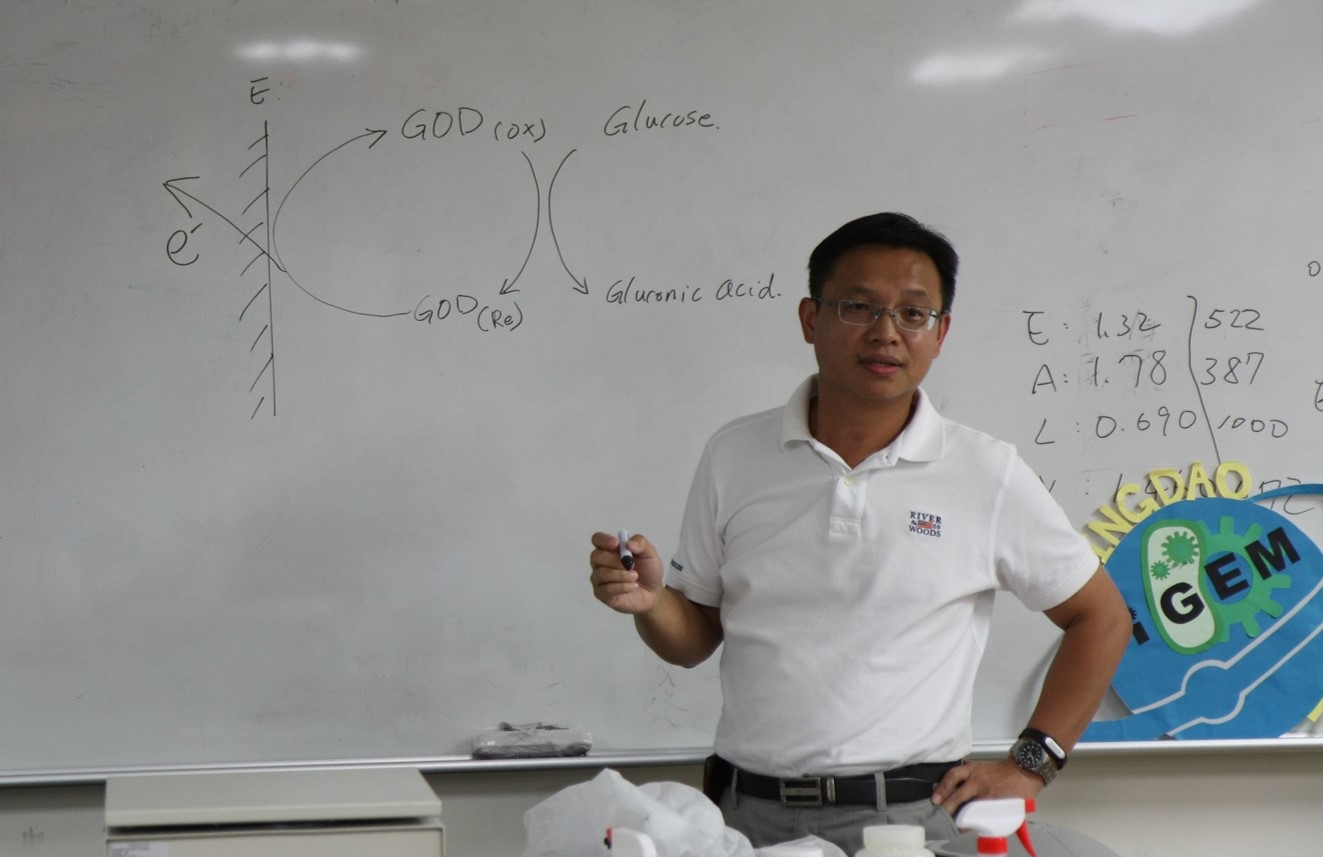 Figure 1: Dr. Wiley’s note of the electrochemical reaction of GOX (or GOD) with glucose. The picture was taken on August 24th, 2016.


Alcohol oxidase (AOX) plays a vital role in the metabolism of methanol and acts as a carbon and energy source to Pichia pastoris, a methylotrophic yeast. AOX is able to catalyze the oxidation of other short-chain primary alcohols such as ethanol. However, the reduction potential of AOX is not well studied and thus is not available for our device.

Figure 2: The schematic diagram of chemical reactions of GOX & AOX and the electrochemical oxidation-reduction reaction on the electrode. 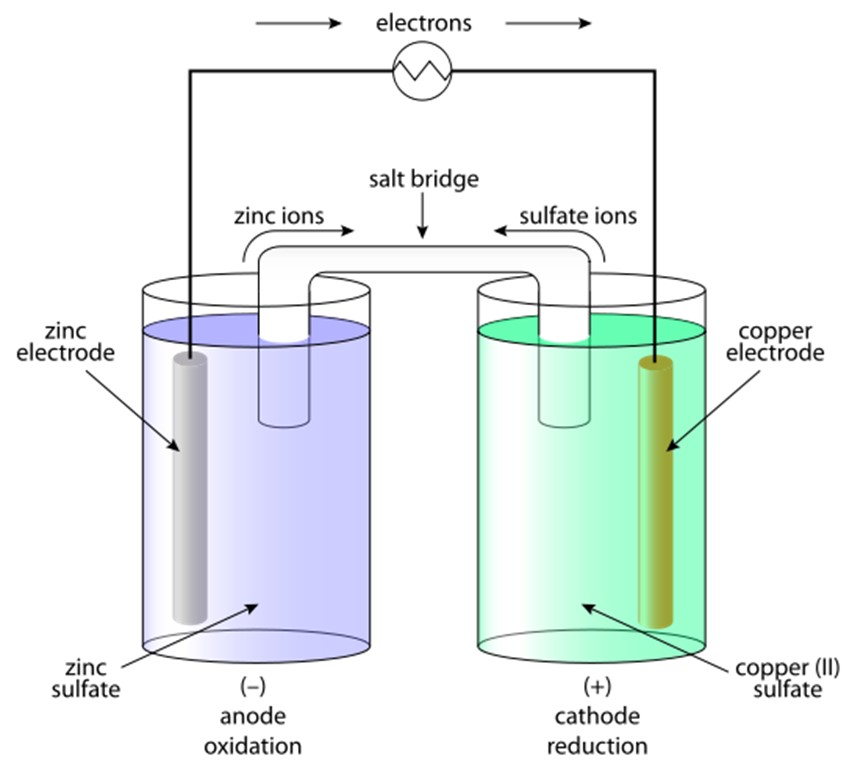 Cyclic voltammetry is a potentiodynamic electrochemical measurement, in which the working electrode potential is ramped linearly versus time. The ramping potential move forward to the maximum and backward to the minimum, the cycle continues until the end of the experiment. In a CV experiment, electrochemical properties of a chemical molecule in the solution can be studied. As Figure 5 showed, the peak of the current refers to a given chemical molecule or enzyme undergoes an oxidation-reduction reaction at a limited range of voltage around 0.4V in the study. The different strengths of the current may be caused by the concentration of enzyme substrates. 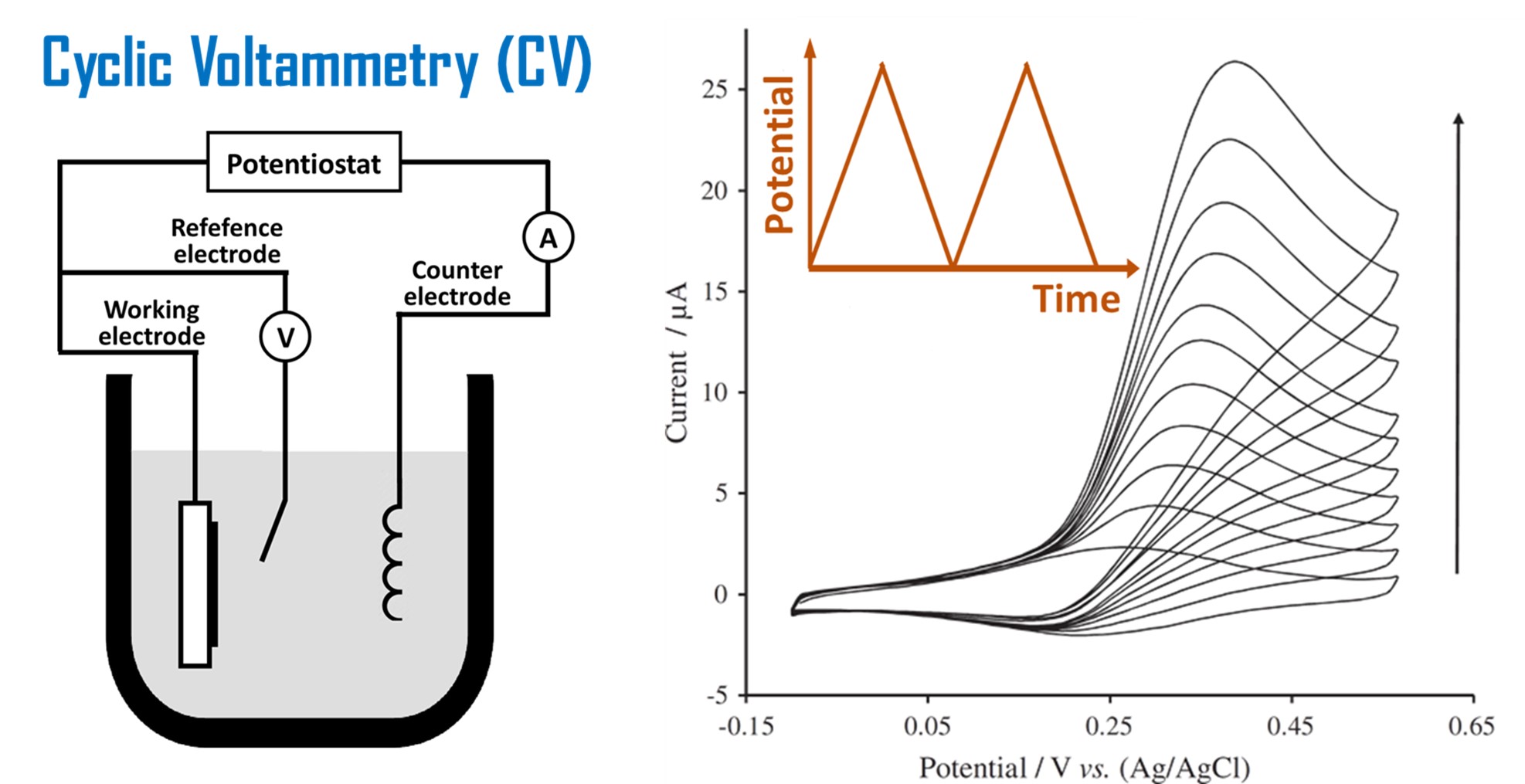 Zensor Simulator innovated by Dr. Wiley is designed as a potentiostat to perform the electrochemical analysis. Because the chemical reaction progresses in a small region, reference and counter electrodes were deposited, little amount of the chemical solution will be required for assays. In the system, the electrochemical properties of redox enzymes can be studied in a cyclic voltammetry (CV) experiment. Also, the relationship of current strength and time (IT) could be measured by amperometry after the reduction potential of an enzyme was determined and set. Moreover, the concentration calibration curve can be calculated as a function of current and time by the software installed in the device. More amazingly, the built-in burner would write data into USB flash drive which could be further applied to an electrochemical analyzer like BGM. As a result, you have a test strip with a new enzyme on it which is ready to be applied to an electrochemical analyzer. 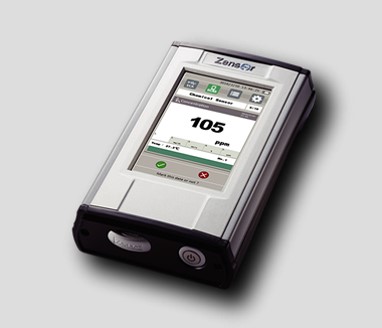 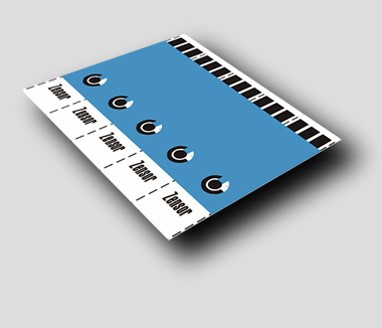 Procedure of the electrochemical experiments (which were all performed in the all-in-one Zensor Simulator):


To make an electrochemical meter read the data of AOX catalyzing the oxidation of alcohol in a dose-dependent manner, all the measures need to be determined in sequence. (i.e., the enzyme’s reduction potential, the relationship of current and time, alcohol concentration calculation based on the oxidation state of AOX, and finally writing a program of the mathematical formula of the calibration curve for the device).

First, a cyclic voltammetry experiment was performed to determine the reduction potential of AOX. In Zensor Simulator, the cyclic voltage not only ramped the working electrode’s potential linearly versus time, but also ramped the potential in the opposite direction once the maximal potential was reached, and the cycles continue until the end of the experiment. In the CV experiment of AOX, we put 50µl of the K2HPO4 solution containing the AOX enzyme displayed on the surface of E. coli onto the test strip. Then, 20µl of 10% alcohol was added and mixed in the solution. As shown in Figure 8, the result indicated that a current peak (the current values at 2.0E-05~2.2E-05) was induced around the voltage of -1200 mV, implying that the AOX enzyme did undergo redox reaction. But the current was not much significantly changed when responding to the different concentrations of alcohol. 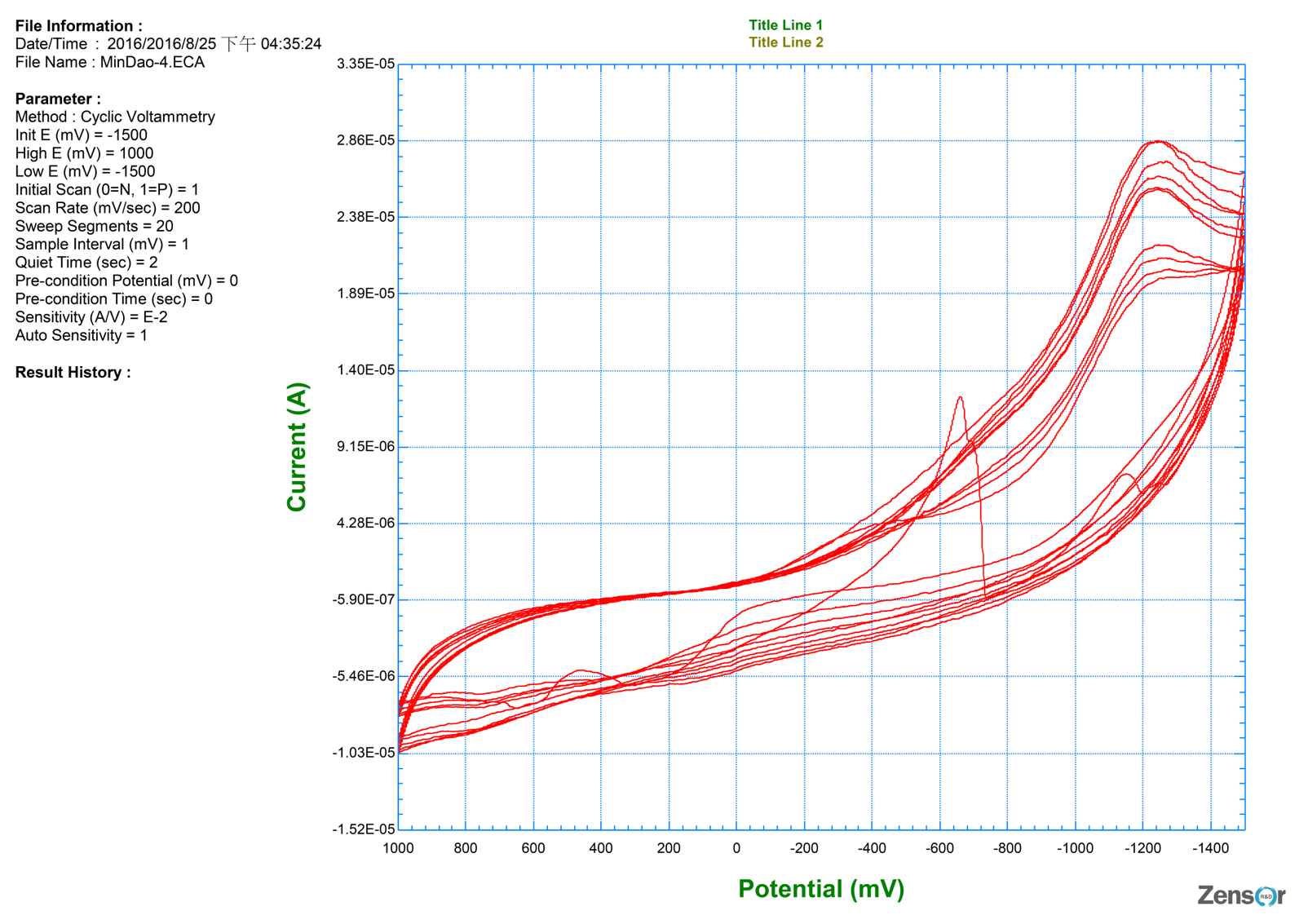 To improve the redox reaction, we added 200 µl of potassium ferricyanide (K3[Fe(CN)6]) as electron mediators to facilitate the transfer of electrons to electrodes. When mixed with various concentration of ethanol, the electric currents rose significantly (i.e., the higher current intensity between 2.6E-05~2.9E-05) and dose-dependently upon the increasing concentrations of alcohol around the voltage of -1200 mV.

Amperometry is a way to detect the change of electric current along with the time (IT) under a given voltage. Followed the CV experiment, we’d like to know the current variation dependent on the different concentration of ethanol with the electric potential set at -1200 mV. As Figure 9 showed, the increased currents were measured along with the three different concentrations of ethanol (i.e., 0.385%, 0.741% and 1.071%). Further, based on the data, we plotted a concentration calibration curve (Figure 10) with a mathematical equation, which could be applied to estimate unknown concentration of alcohol samples using current strength. 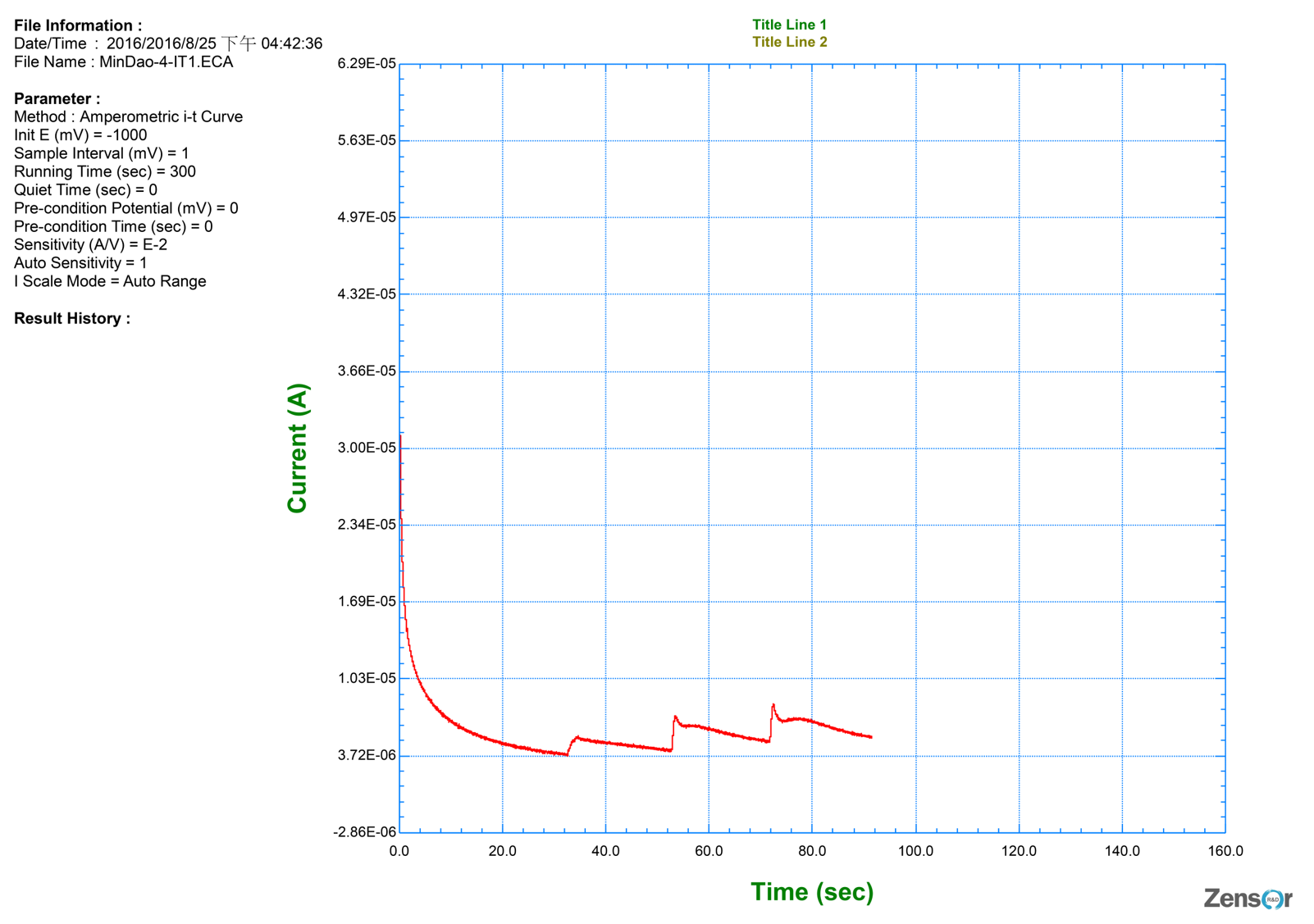 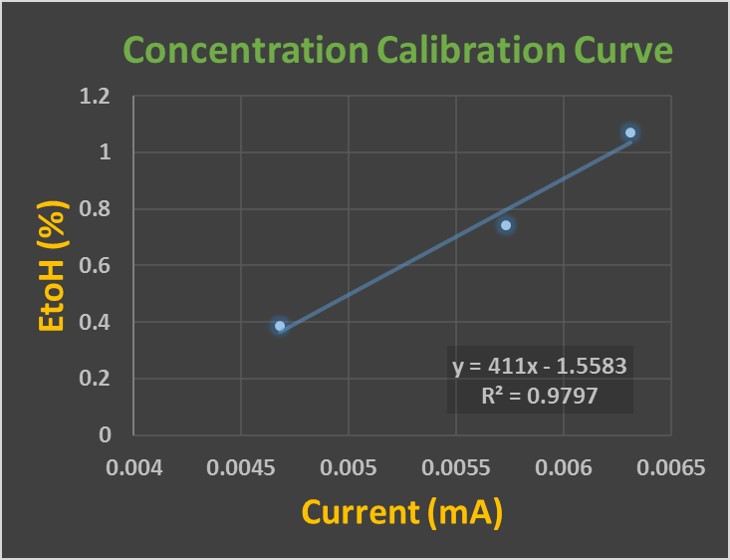 Zensor Simulator has one more amazing function in addition to CV and IT experiments as well as concentration curve calculation. It has an inbuilt burner which can write data to a USB flash driver. Based on the mathematical formula obtained from the concentration calibration curve, we are ready to create a test strip with AOX to measure alcohol concentration and apply it to be a blood alcohol meter. We call it IGEM BLOOD ALCOHOL METER(iMeter)

In addition to the lecture and the experiments of the electrochemistry by Dr. Wiley, we experienced the drop of blood collection by BIONIME lancing device & lancets and the reading of glucose concentration on BIONIME blood glucose meter. It is amazing that the procedure took time no more than 10 seconds and gives the reliable record of glucose concentration. More importantly, it is very easy to use. We truly hope that our new product of IGEM Blood Alcohol Meter (iMeter) can help people and reduce disputes between the consumer and the police. 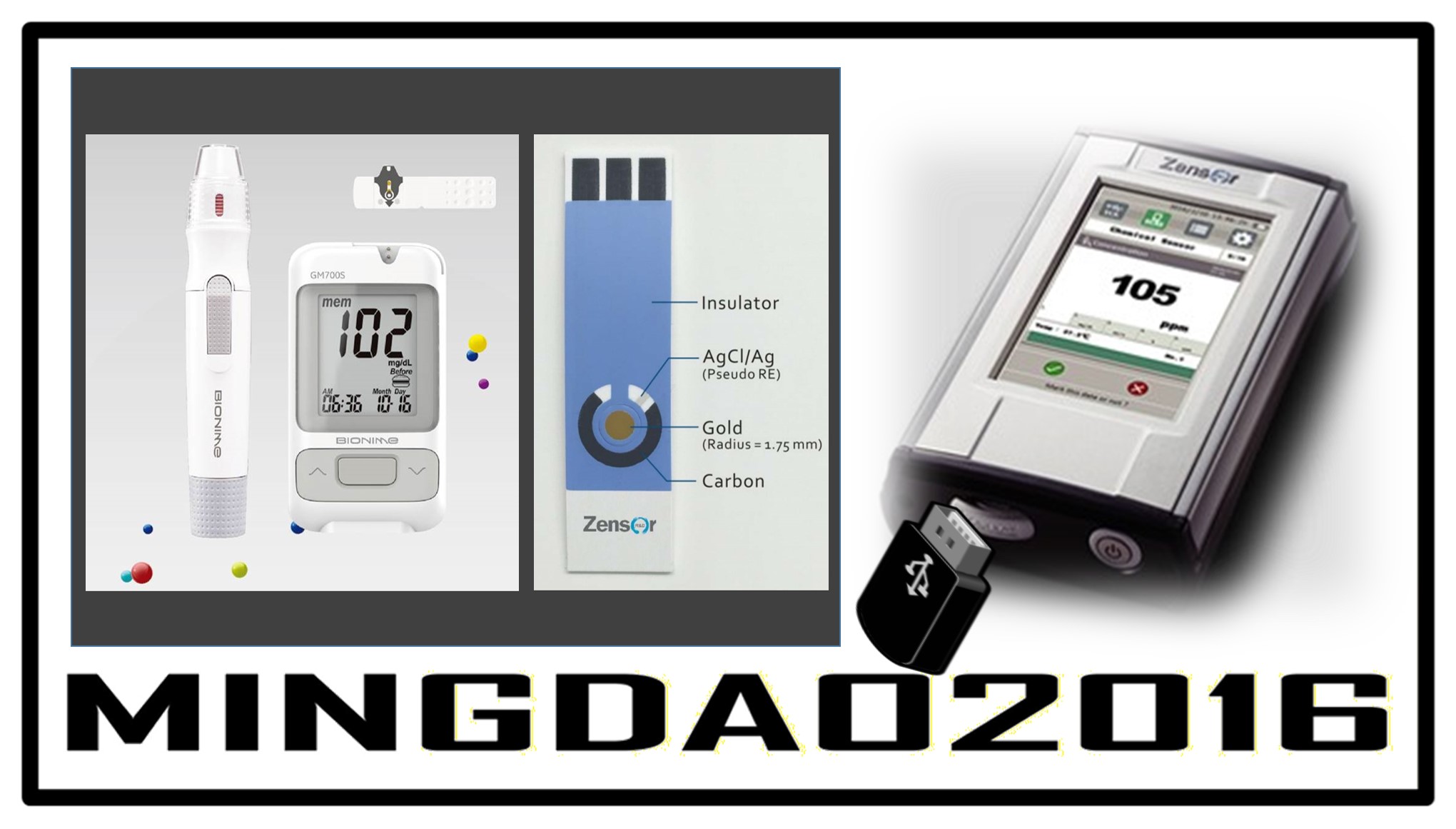