Our goal was to model an inducible recovery drive to reverse the effects of a constitutive gene drive.

Many lethal diseases, such as malaria and zika, are transmitted through mosquitoes. If scientists and genetic engineers could manipulate the mosquitoes' genome, they could potentially prevent mosquitoes from affecting humans, such as by causing mosquitoes to have difficulty drawing blood from humans or making them incompatible hosts for the virus. However, with traditional Mendelian inheritance, only 50% of the offspring of a transfected individual will inherit the gene of interest. That is why we decided to make a gene drive. Using a gene drive to alter the corresponding gene on the other chromosome, we can cause 100% of a transfected individual's offspring to inherit the gene of interest. This helps a gene to propagate through a population much more quickly, which, in the case of curbing disease spread, could be life-saving. Additionally, since introducing a new gene to a wild population could have unforeseen consequences for the population and for the ecosystem, we also looked into a recovery drive, which spreads through a population the same way as a gene drive does, but that reverses the effects of the gene drive

Several years ago a powerful new tool called CRISPR was discovered. CRISPR, or Clustered Regularly Interspaced Short Palindromic Repeats, and its associated protein Cas are part of a prokaryotic immune system for bacteria to fend off against viruses. The Cas protein is a nuclease that uses the CRISPR sequence to target and cut foreign DNA. CRISPR has been revolutionizing research ever since 2005. In the short time since their popularization scientists have developed a variety of adaptations from this system's original function. CRISPR systems are now being used to silence or activate genes, nick genes, and induce a site-directed double stranded break. Now a instead of being used for microbial immunity, a new function has been proposed for this system: inducing a gene drive. 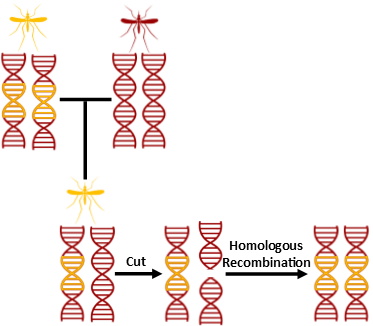 A gene drive is when one gene copies itself and overwrites the other copies on the homologous chromosomes. This process of copying and overwriting happens in all of that individual's progeny. It is through this technology that biologist can now genetically engineer an entire population. With the advent of CRISPR/Cas, gene drives are no longer an idea but rather a reality. By using the site-directed double stranded break capability of CRISPR/Cas, this sends an alert to the cell's DNA repair system. Because the other copy chromosome is intact, the cell undergoes homologous recombination using the other copy as a template thus the copy with CRISPR/Cas overwrites the wild type copy.

There are several criteria for a gene drive to occur. The species of interest must sexually reproduce, have more than one copy of that chromosomes, and reproduce at a relatively high frequency so that the gene penetrates the population in a reasonable amount of time. The preeminent target of all the talk about gene drives are the mosquitos as they are a host for many human pathogens and they fit the above requirements. This method understandably has numerous technical and ethical considerations. Modifying the genome of an entire population could have unforeseen consequences such as disrupting the native ecosystem(s), cross-breeding to non-target population, or spontaneous mutations that cause unintended side effects. In addition to these considerations, there are bioethical concerns about genetically modifying an individual organism much less an entire species.

Scientists have no proposed way to stop or counteract the effects of a gene drive should something unexpected occur. Our proposed solution is a recovery drive.