Our design involves two gene drives, each ostensibly opposite in function. We refer to these as the gene drive and the recovery drive. The gene drive serves to knock-out the yeast ADE2 gene, and the recovery drive, upon activation via tetracycline exposure, replaces this gene with a mutated ADE2 gene, called ADE2*, which is has the same protein sequence as the original ADE2 gene using different codons to prevent the gene drive from targeting ADE* The work was to be done in the yeast strain CEN.PK2, an auxotrophic strain that is unable to produce tryptophan, uracil, leucine, or histidine.

The design for the first gene drive appears as follows: 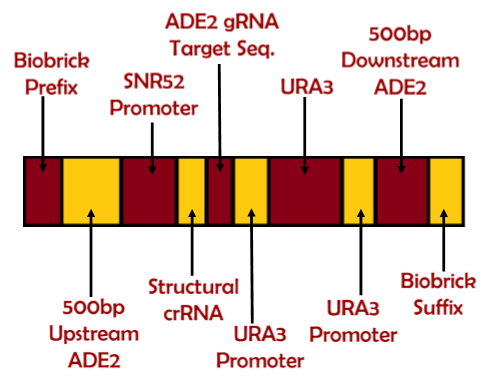 This DNA complex contains the proper prefix and suffix sequences to function as a BioBrick. 500 bp upstream and downstream of ADE2 was added to make sure that the ADE2 promoter was incorporated as well as so that it can easily inserted the yeast genome via homologous recombination. The SNR52 promoter, structural crRNA, and ADE2 gRNA targeting sequence were replicated from the DiCarlo 2015 paper (https://www.ncbi.nlm.nih.gov/pmc/articles/PMC4675690/). Sequence linked here (https://www.ncbi.nlm.nih.gov/nucleotide/939193425?report=genbank&log$=nuclalign&blast_rank=1&RID=0AUW9RY3014). We used URA3 as our positive selection marker in yeast. The second URA3 promoter was added so that we could flip the URA3.

The design for the second gene drive, or recovery drive, appears as: 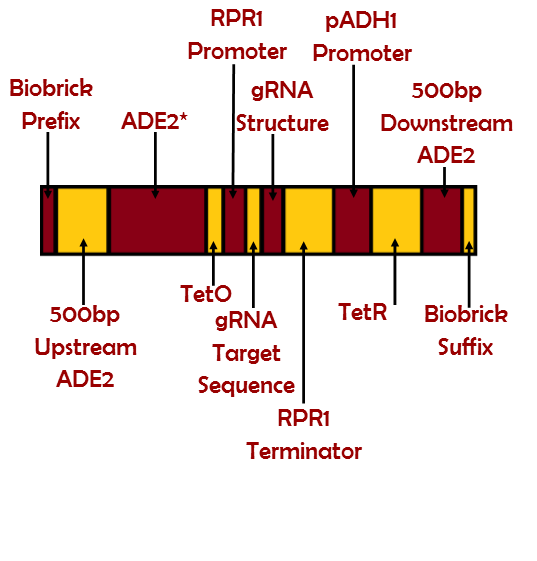 The biobrick prefix and suffix as well as the 500 bp upstream and downstream were included for the same reasons as in the gene drive. The ADE2* gene codes for the same protein as the wild type ADE2 gene using different codons to prevent the gene drive from targeting ADE2* and overwriting the recovery drive. Codons were chosen to reduce homology between the gRNA and target sequence , but had the most similar codon usage. In order to make our recovery drive inducible, we incorporated a Tet operator before our RPR1 promoter along with TetR. TeTR will bind the TetO unless it is in the presence of tetracycline. (http://nar.oxfordjournals.org/content/44/11/5365.long) In this way, we have control over when the effects of the first gene drive are reverted.