On April 29 we were able to present the iGEM-competition, synthetic biology, as well as, the general idea of our project at “Lange Nacht der Forschung”. This is an event organized by the Austrian broadcast to show the general public what we are doing in research including chances and visions. Together with the institute of molecular biotechnology and ACIB we facilitated the visitors to get a first glance at microbiology, enzymes, and the field of genetic engineering, as well as, synthetic biology. For example we did an isolation of DNA from strawberries with ordinary consumables. Especially the DNA isolation was our task, together with the Austrian part of the last year’s iGEM Team “Manchester-Graz”. All over the event we extracted DNA together with hundreds of visitors, while a few of us gave an introduction to DNA and the general construction of a cell. Furthermore, we created a poster about our project and answered different questions about it and about the topic in general. The range of asked questions was enormous. There were some easy ones like:

Q: What is the difference between DNA and DNS?
A: DNS is the German expression for DNA. The A stands for acid. In German it would is S for “Säure”. In the course of time DNS was replaced by DNA also here in Austria.

Q: Why do we need genetic engineering? We did not need it for decades! Why now?
A: Our modern world would not work without genetic engineering anymore. Many things in our daily life are made by microorganisms; E.g. citric acid and insulin, just to name 2 very popular examples. The next thing is that it is true that we had no need for genetic engineering in the past. But what we can see is that the mankind wants to spend less and less money for food and other commodities. Without plants and genetic engineering it would not be possible to provide 1kg of pork meat for less than €2,- Even our forefathers did kind of genetic engineering. For sure they did not use our methods, but they always cultivated the best and biggest plants for the next year crops, as well as, mixed different plants to create something new and probably better. 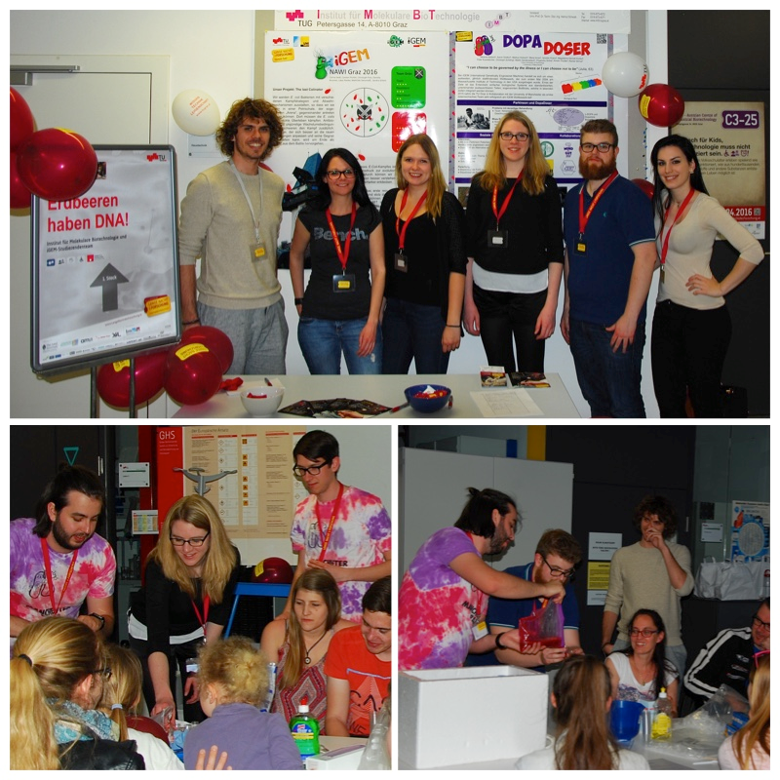 On May 3 we got the chance to visit a “New Middle School” (NMS) in Graz. We were talking about iGEM and Synthetic Biology in all grades (from 1st to 4th). For this reason, we separated in two groups of 2/3 and visited 2 classes at a time. The lesson started with a small introduction to synthetic biology and genetic engineering, in a child-appropriate manner. We compared DNA and genes to a recipe and tried to keep it as simple as possible. The kids were very attentive and curious. Some of them also had an impressive knowledge about the topic. They asked us questions about Genetic Fingerprinting and inheritance. After the theoretical part, we did our DNA extraction from strawberries again. The enthusiasm was huge and some kids told us they wish to become biologists, like we are. It was an awesome experience and we will never forget the excitement in the kid’s eyes. 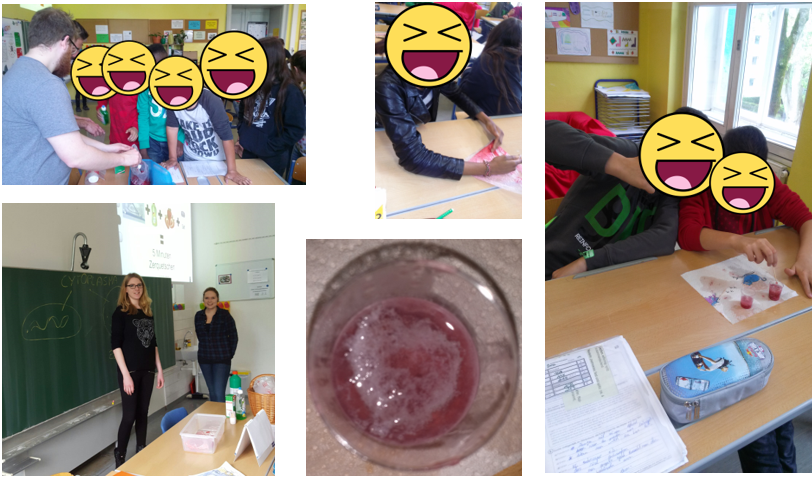 After bringing the subject closer to the general public at “Lange Nacht der Forschung” and to kids by teaching at NMS, we tried to figure out the best way to get our university and especially students from all departments involved. It did not take long and we came up with the idea of a “Spritzerstand” on June 16. Spritzer is very popular among young people here in Austria, as it is wine mixed with sparkling water. We also added some flavour like raspberry and elder. Around the “Spritzerstand” we placed posters and further information about our project. The students were very curious and interested in what we are doing. It was a great success and it had exactly the effect we wanted because people were spending hours talking, drinking and discussing science!

After the great success of our “Spritzerstand” in summer, we thought about doing a similar thing in fall. In Austria it is very popular to drink must, grape juice during fermentation. Especially in fall must in combination with sweet chestnuts is a lovely thing. For this reason, we planned a must event (like the spritzer event) on October 18. It is a great chance for us to present the results of our project to fellow students and to continue spreading the idea of iGEM among young people. 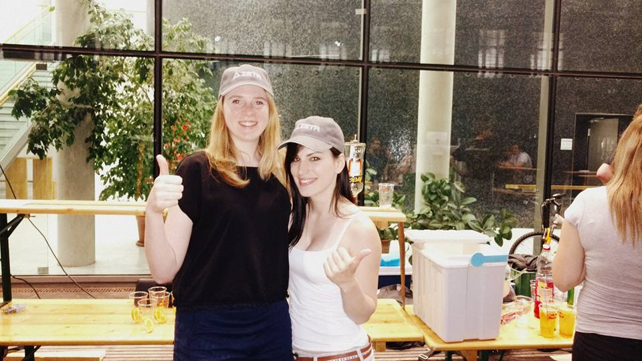 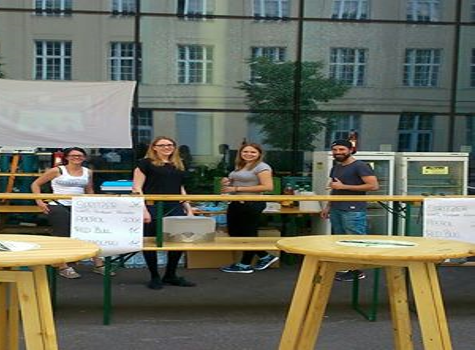 Another idea was to make a short movie which introduces our project concept and us. It was not that easy to combine the project idea with introducing us, but after brainstorming together with Professor Fritz Treiber we came up with a good concept. He told us how to do a screenplay, the importance of a good time table and borrowed us his sound equipment. It was a fun time recording and cutting the movie and we are very proud to introduce you: The Last Colinator – Trainingscamp:
Video link