Undeniably, no matter what we pursue, it is the health and wellness that people care about most. Everyone goes for a healthier and stronger body, but we are all clear about that there are numerous diseases around us, and it's still clueless for us to completely resist and cure a large quantity of them. People usually feel uncomfortable and scared by intractable and severe diseases. And cancer must be one of the nightmares.

Cancer is a group of diseases characterized by the uncontrolled growth and spread of abnormal cells. Once the spread, also known as metastasis, isn’t well controlled, it can result in death[1] . As one of the most frightening death threat, cancer can be aggressive and malignant. The harmful effects of cancer on individual, family and society are enormous and appalling. 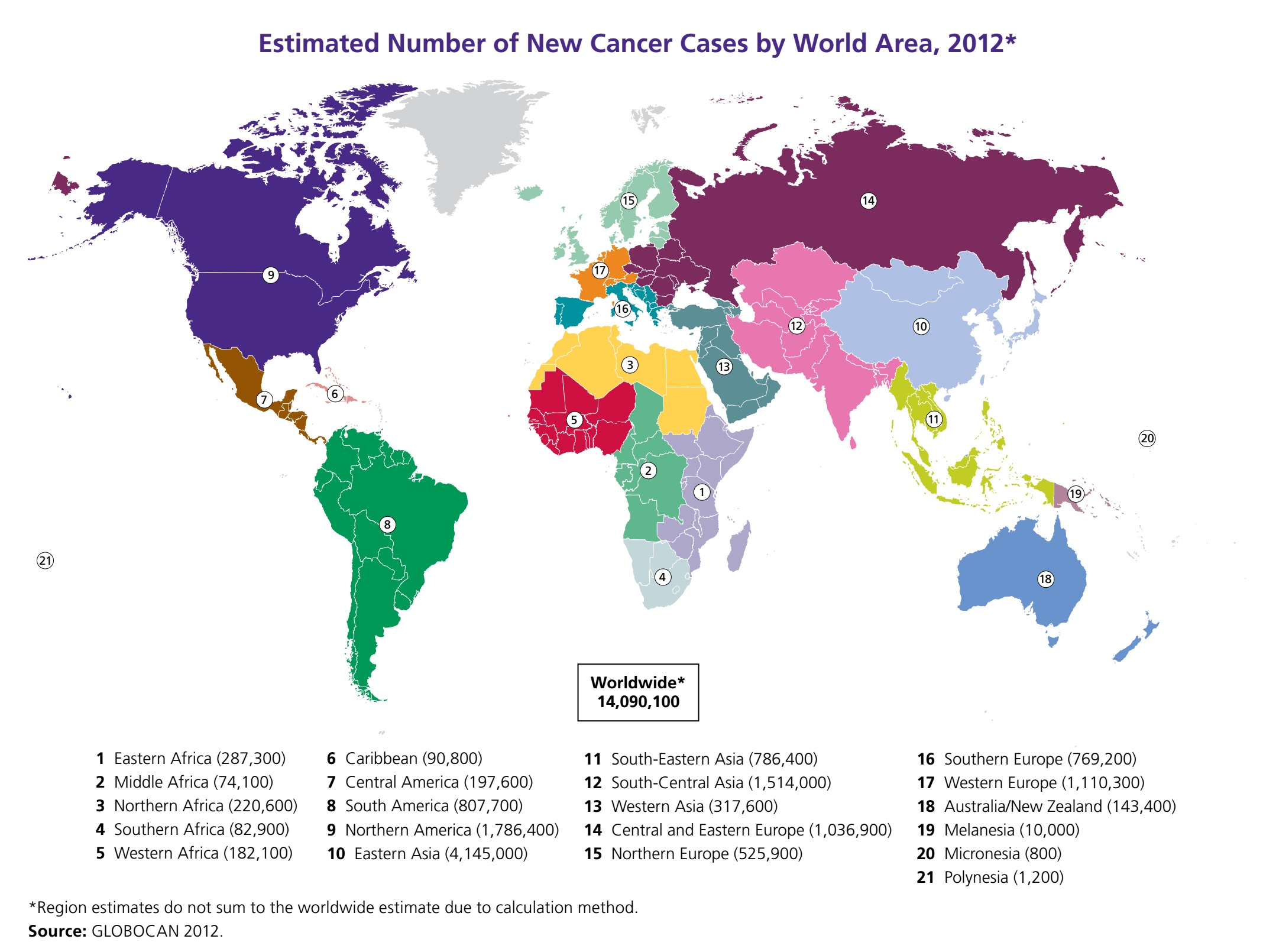 According to WHO and the latest global cancer statistics (2015), there were 14.1 million new cancer cases in 2012 worldwide and the corresponding estimates for total cancer deaths were 8.2 million (Fig. 1). Literally, about 22,000 cancer deaths happened a day. Besides, 1 in 7 deaths was related to cancer, and cancer caused more deaths than AIDS, tuberculosis and malaria combined. By 2030, the global burden is expected to grow to 21.7 million new cancer cases and 13 million cancer deaths on account of rapid growth and aging of population[1] . Due to the adoption of lifestyles that are known to increase cancer risk, such as smoking, poor diet, physical inactivity and reproductive changes (including lower parity and later age at first birth) in developing country, it’s reasonable to estimate that the actual figures will be considerably larger[2] .

Therefore, cancer is becoming one of the leading causes of death and the major public health problem around the world (Fig. 2). 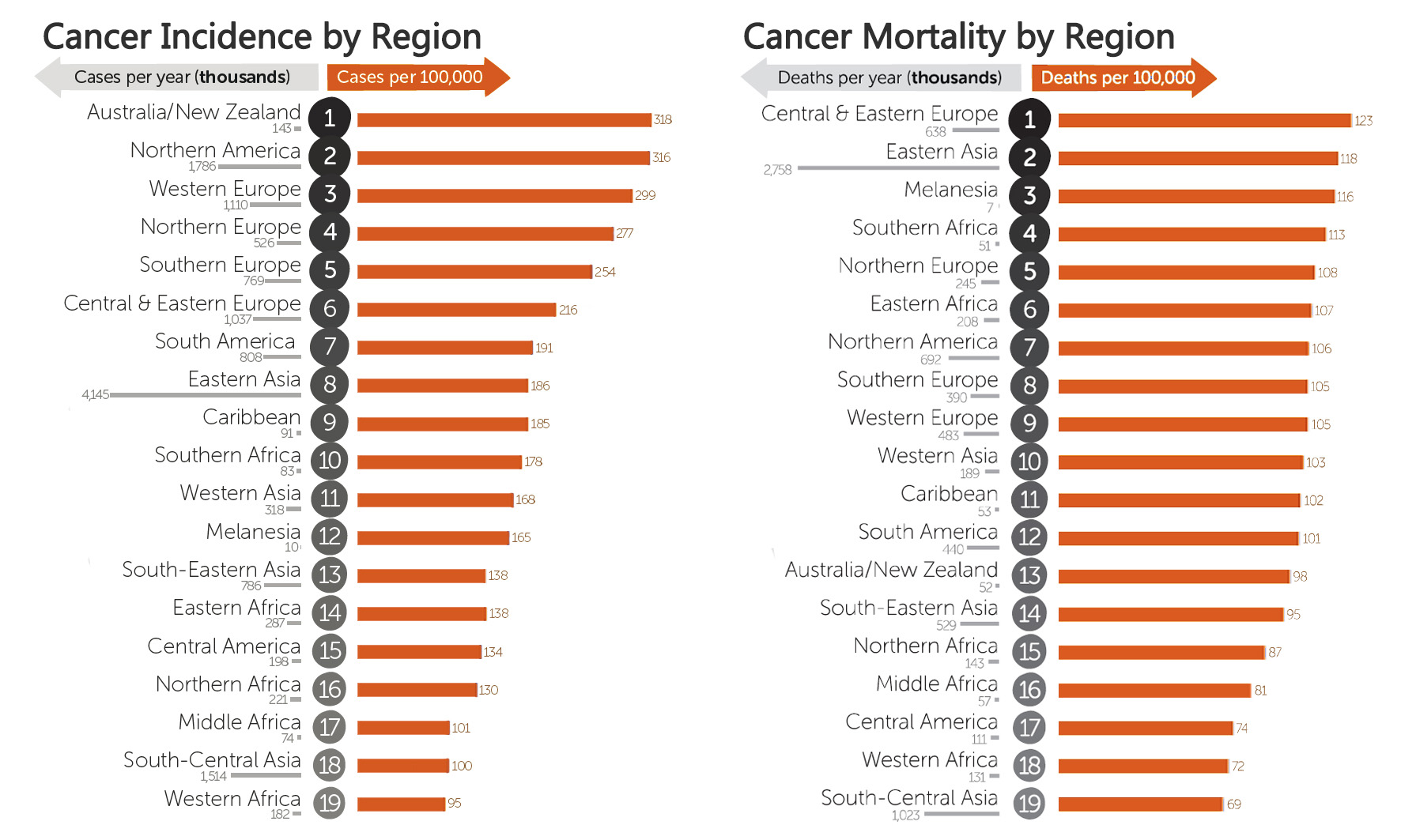 Cancer statistics describe what happens in large groups of people and provide a picture of the burden of cancer on society. Although statistical trends may not be directly applicable to individual patients, they provide researchers, health professionals, and policy makers with essential information, helping them understand the impact of cancer on population and thus develop appropriate strategies to address the challenges that cancer poses to the society at large. Also, statistical trends are important for measuring the success of efforts in controlling and managing cancer. 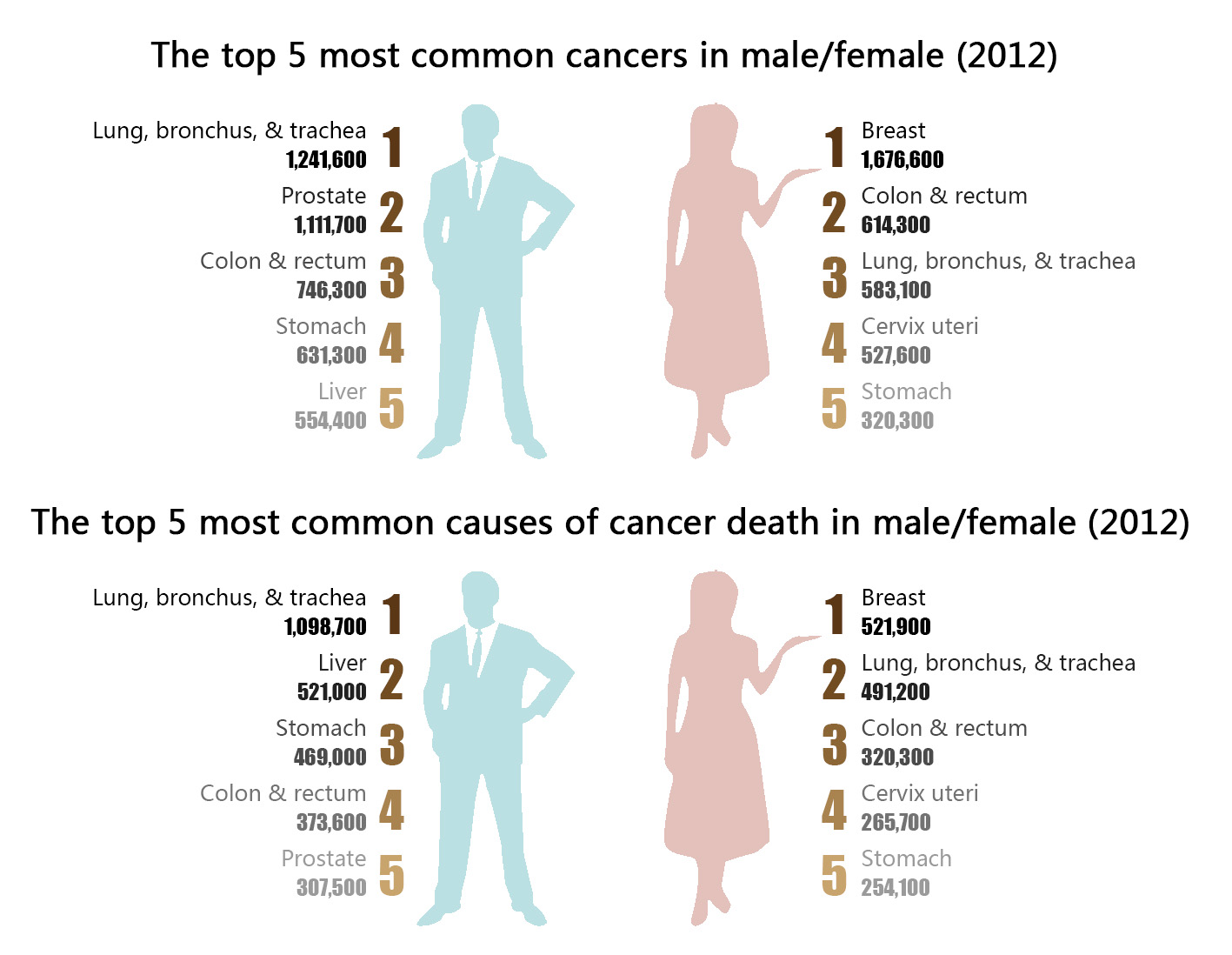 Cancer incidence and mortality have maintained vigorous growth in China, making cancer the leading cause of death since 2010, corresponding to global trend. Because of China's massive population and difficulties in data collection, previous national estimates were limited and inaccurate. With high-quality data from an additional number of population-based registries now being available through the National Central Center Registry of China (NCCR), it's possible for us to have a general understanding of cancer incidence and mortality in China.

Two line charts below showed trends of cancer incidence and death rates from year 2000 to 2011, as well as trends of new cancer cases and deaths in China (Fig. 6a, 6b). For all cancers combined, the age-standardized incidence rates were stable from 2000 to 2011 for males, while significant upward trends were observed among females. On the contrary, the age-standardized mortality rates decreased considerably for both sexes. However, it is still worth noting that despite this favorable trend, the number of cancer deaths substantially increased (73.8% increase) during the corresponding period because of the aging and growth of the population.

These striking figures deserve our attention and contemplation, driving us to dig out deeper understanding of cancer, develop appropriate policies for cancer control and design effective treatments for various cancer types.

Lung cancer is one of the most frequently diagnosed cancer types and the leading cause of cancer-related death around the world[7] . Globally, an estimated 1.8 million new cases occurred in 2012, accounting for approximate 13% of total cancer diagnoses[2] . An estimated 1.6 million deaths (1.1 million in men and 491,200 deaths in women) were reported in 2012[1] . In some countries, for women, it is now the leading cause of cancer death surpassing breast cancer. The figure below reveals international variation in lung cancer incidence published in Global Cancer Facts & Figures (3rd edition, 2015) (Fig. 7). 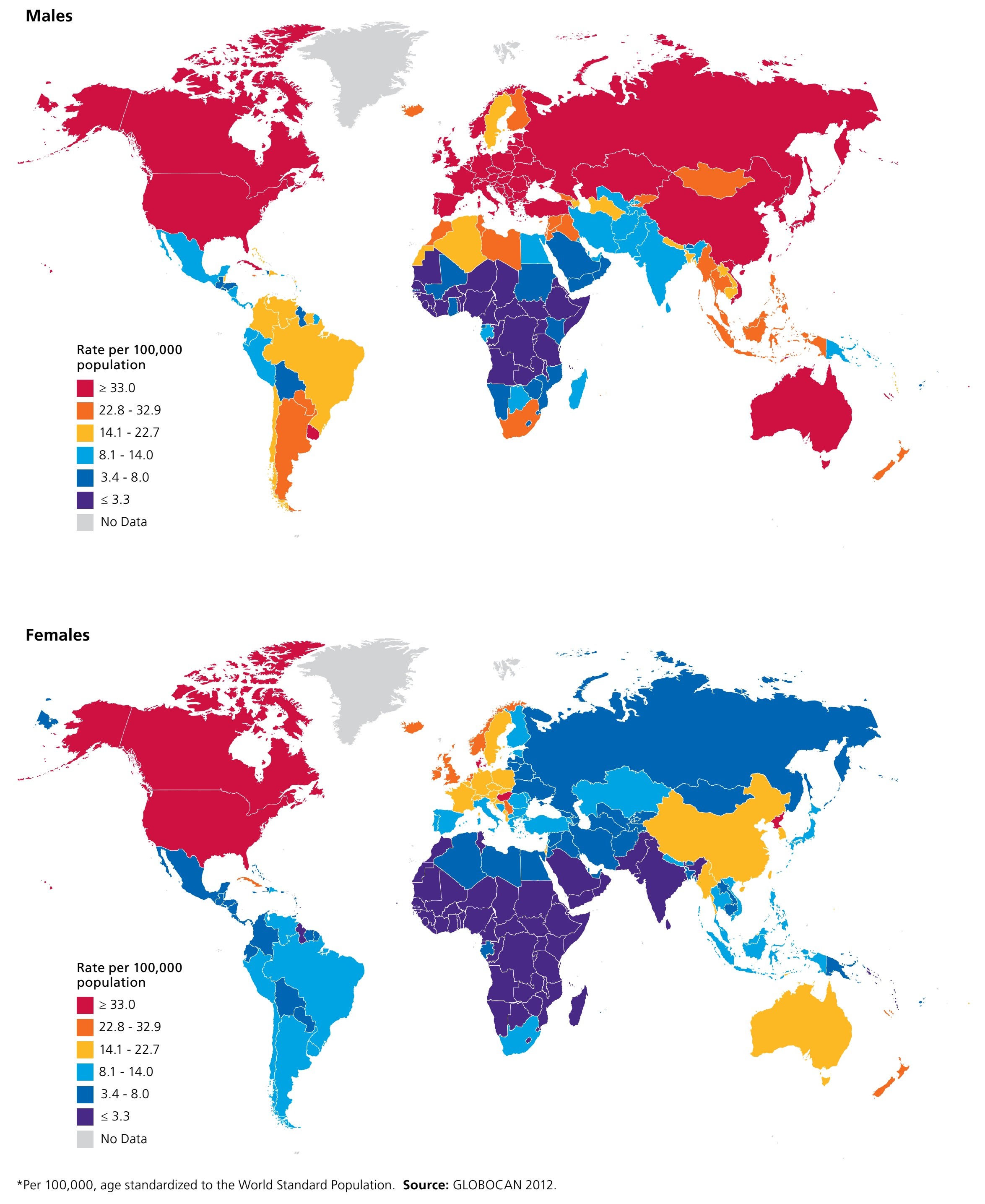 Take the United States as an example. According to National Cancer Institute, 224,390 new cases of lung and bronchus cancer are estimated in 2016, accounting for 13.3% of all new cancer cases, in line with the global trends[8] . Despite improvements in surgical techniques and combined therapies over the past several decades, lung cancer is still one of the most lethal cancers. Five-year net survival rate is generally similar worldwide, ranging from 10% to 20%[1] . According to data from SEER 18 2006-2012, present 5-year survival rate of lung cancer in the US is merely 17.7% (Fig. 8)[8] . The table below shows 5-year relative surviving of lung cancer from year 1975 to 2008 in the US (Table. 1).

Figure 8. Present Five-Year Survival Rate of Lung Cancer in the US[8]

Cancer stage at diagnosis determines treatment options and is strongly related to the length of survival. In general, five-year survival situation will be more optimistic when patients being diagnosed lung and bronchus cancer at an earlier stage. For lung cancer, 15.7% are diagnosed at the local stage, the 5-year survival for which is 55.2%[8] (Fig. 9). 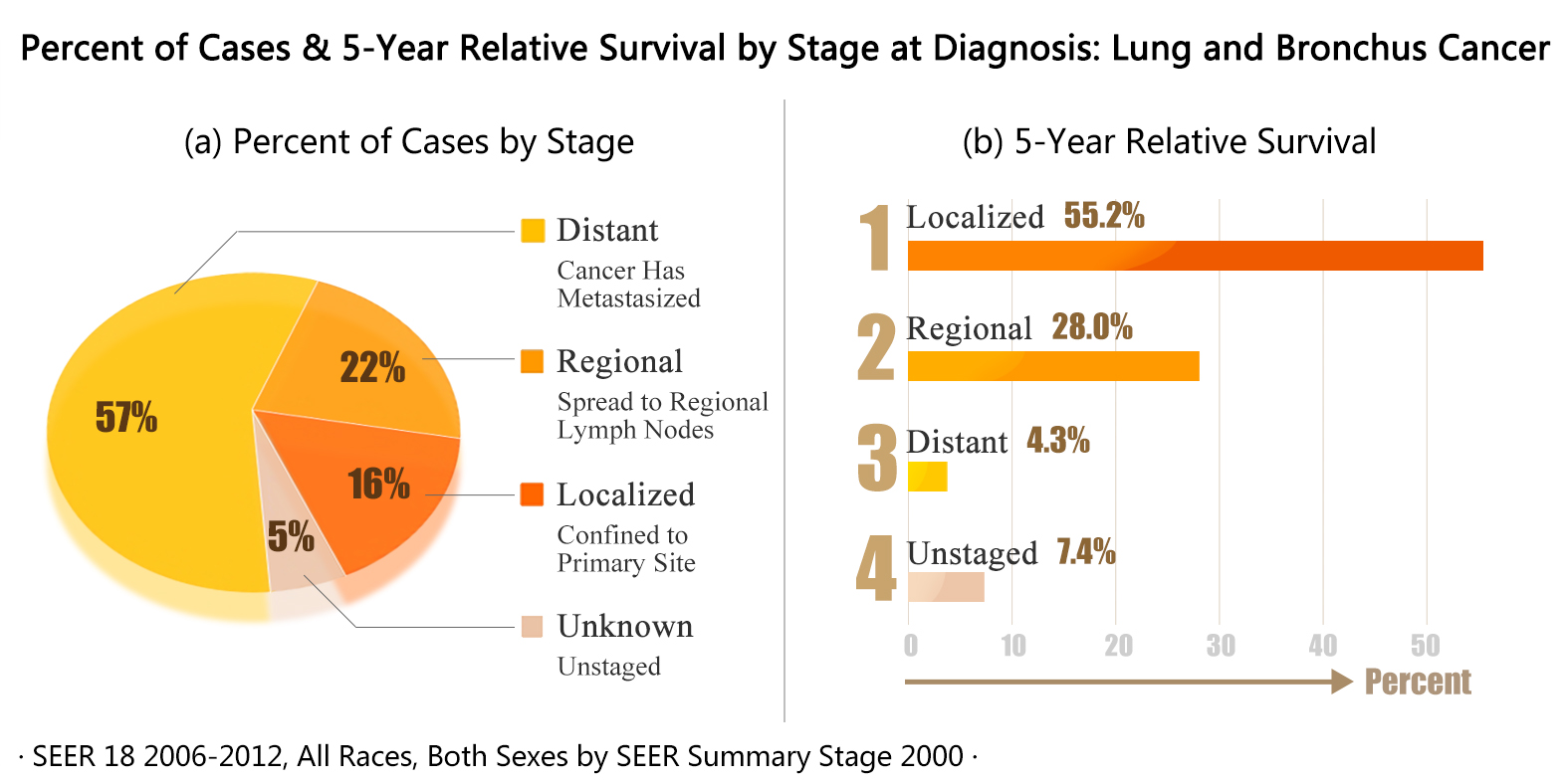 Figure 9. Percent of Cases and Five-Year Survival Rates by Stage at Diagnosis[8]

Symptoms of lung cancer do not usually occur until the cancer is advanced, and may include persistent cough, sputum streaked with blood, chest pain, voice change, worsening shortness of breath, and recurrent pneumonia or bronchitis. By far, smoking is widely recognized as the primary contributor to lung cancer. And for nonsmokers, passive smoking can be a silent killer. Studies from the US, Europe and the UK have consistently shown significantly increased risk among those exposed to secondhand smoke[7] . Besides, lung cancer is also attributable to increasing age, radon gas, asbestos, air pollution, as well as inherited factors[1] .

Two main categories of lung cancer are classified according to histological types: non-small cell lung cancer (NSCLC) and small cell lung cancer (SCLC). The most common types of NSCLC are squamous cell carcinoma, large cell carcinoma and adenocarcinoma, and all the types can occur in unusual histologic variants. Although NSCLC is associated with smoking, adenocarcinomas may be found in non-smokers. As a class, NSCLC is relatively insensitive to chemotherapy and radiation therapy compared with SCLC[9] .

Discovery of driver oncogenes has revolutionized the field of lung cancer therapeutics. The identification of distinctive mutations in lung cancer has led to the booming development of molecular targeted therapy. In particular, subsets of adenocarcinoma now can be defined by specific mutations in genes encoding components of the epidermal growth factor receptor (EGFR) and downstream mitogen-activated protein kinases (MAPK) and phosphatidylinositol 3-kinases (PI3K) signaling pathways. These mutations may define mechanisms of drug sensitivity and primary or acquired resistance to kinase inhibitors[10] . KRAS-mutant lung cancer accounts for approximately 25% of NSCLC, representing an enormous burden of cancer worldwide. KRAS mutations are frequently observed in adenocarcinoma. Since KRAS mutation in lung cancer was first reported in mid-1980s and remained the most commonly mutated oncogenes in unselected patients, they have risen to fame as elusive targets in a rapidly-evolving field of molecular therapeutics. In the ever-changing world of targeted therapy for molecular drivers of lung cancer growth, KRAS mutations continue to represent a significant challenge for drug development[11] .

4. Traditional cancer therapies and their defects

Surgery is the primary method of treatment for most isolated, solid cancer and may play a role in palliation of pain and prolongation of survival[12] . Namely, feasibility and efficacy of surgery is based on the type and stage of cancer, and for certain types, surgery is far from sufficient to eliminate the cancer.

Radiation therapy is a therapy using ionizing radiation, generally as part of cancer treatment to control or kill malignant cells. It may be curative in a number of types of cancer if they are localized to one area of the body. And it may also be used as part of adjuvant therapy, to prevent tumor recurrence after the surgery to remove a primary malignant tumor. Radiation therapy is synergistic with chemotherapy as well, and has been used before, during, and after chemotherapy in susceptible cancer cases[13] .

Chemotherapy is another conventional cancer treatment that uses one or more anti-cancer drugs, called chemotherapeutic agents, as part of a standardized chemotherapy regimen. It is always given with a curative intent and aims to prolong life or to reduce uncomfortable symptoms[14] .

While radiotherapy and chemotherapy are effective to some extent, the adverse effects remain inevitable, the main kinds of which are fatigue and skin irritation. Acute side effects such as nausea, vomiting, appetite loss, swelling, intestinal discomfort and late side effects such as fibrosis, epilation, dryness and sleeping problem are very common. Immunosuppression, myelosuppression, typhlitis, gastrointestinal discomfort, anemia can also occur after administration of chemotherapy[15] [16] . Since these therapies will inevitably and indiscriminately damage the normal cells, patients always show fragile health condition after treatment, leading to low prognosis.

Nowadays, clinical trials have broadened their ways to immunotherapy, hormone therapy, etc. Take immunotherapy for example: it is one kind of treatment that could induce, enhance, or suppress immune response. Active immunotherapy directs the immune system to attack tumor cells by targeting tumor-associated antigens. Passive immunotherapies enhance existing anti-tumor responses and include the use of monoclonal antibodies, lymphocytes and cytokines[17] . Despite much exiting progress, the therapeutic effect isn’t always satisfactory. Due to the heterogeneity and complexity, tumor cells are good liars playing trick on immune system. Till now, relapse and drug resistance are unable to be avoided effectively and immunotherapy remains controversial and immature. Moreover, it can be very expensive in some cases.

Since cancer is an extremely heterogeneous disease with variants having different genetic and biological properties, drugs targeting a specific molecule that interferes with cancer growth or metastasis are much helpful and effective to ensure that patients will receive optimum management and can be an ideal choice for further exploration. The identification of distinctive mutations in various cancer has led to the booming development of molecular targeted therapy. Small molecule targeted drugs like Gefitinib (Iressa) and Erlotinib (Tarceva) have already been launched into market[11] . However, these drugs have drawbacks as high cost of development and inefficiency due to relatively high off-target rate. Furthermore, their depending on the same chemical entity leads to the difficulty of transplanting to another mutation or cancer case. For instance, Gefitinib, as an EGFR inhibitor, is unable to deal with KRAS mutation in NSCLCs.

In view of serious situation of cancer incidence and mortality, and drawbacks of current treatments, it's worth developing a much more effective drug system and this is what our project focus on.

Our ideal drug system will contain some basic features as follows:

First, it is designed to be targeting and systemic. Namely, our drug aims at tumor cells and once metastasis appears, it can be a treatment for the whole body as well.

Second, efficiency and minimum side effects are our goals as well. To be exact, the targeting peptides on the surface of our delivery agent guarantee the accurate arrival in tumor cells by ligand-receptor interaction. Thus, tumor cell's escape and normal cell's damage will be avoided as much as possible based on percision.

In addition, we aim to construct a drug system of high transplantability. There are different types of cancer cases and each case has its distinctive mutations in specific oncogenes. And our system consists of target gene (KRAS), drug (RNAi), delivery agent and targeting tool (exosome and iRGD-lamp 2b fusion protein). Hence, it is much easier for us to design a derived drug based on the same silencing and delivery system. By replacing appropriate siRNA and corresponding targeting peptides, it can specifically down-regulate different disease-related genes and thus treat various diseases pertinently. To wit, our drug owns general applicability, leading to remarkable reduce in cost of drug development.

Now you can click three links above to get more detailed information in our drug system.

[3] Worldwide Cancer Incidence. International Agency for Research on Cancer of WHO and Cancer Research UK.

[4] Worldwide Cancer Mortality. International Agency for Research on Cancer of WHO and Cancer Research UK.