you can not see me!
Protocols
1. The Markerless Gene Replacement Method for Bacillus amyloliquefaciens LL3
Abstract: This is a markerless gene replacement method that combines a temperature-sensitive plasmid pKSV7 with a counter-selectable marker, the upp gene encoding uracil phosphoribosyltransferase (UPRTase) for the Bacillus amyloliquefaciens strain LL3. This method allows us to adapt a two-step plasmid integration and excision strategy to perform markerless deletion of genes.
☞☟
Introduction 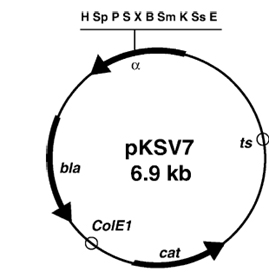 The temperature-sensitive plasmid pKSV7 of Bacillus can replicate at 30oC normally, but the plasmid will be lost at 42oC. Combined the plasmid with a counter-selectable marker, the markerless gene replacement method can be constructed.
The upp gene encodes uracil phosphoribosyl transferase (UPRTase), which makes U transfer to UMP. Thus, cell can use extrinsic uracil via the following pathway 5-FU ➔ 5F(fluorin)-UMP ➔ 5-F-dUMP. Since the products of this pathway are toxic, cellular growth can be restrained.
If upp gene is knocked out, bacteria can resist 5-FU toxicity.
Procedures 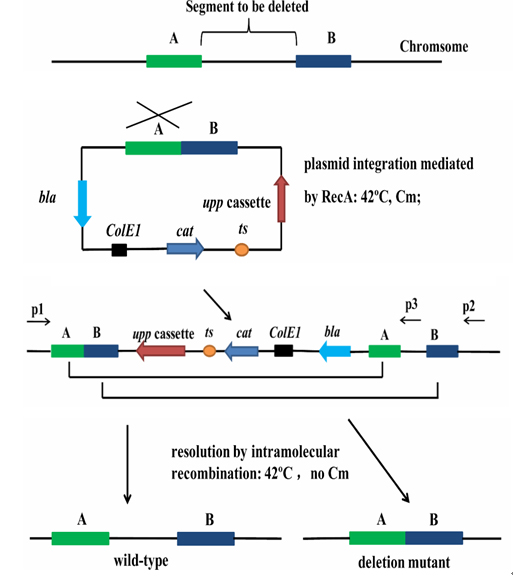 Reference: Zhang W et al. Applied Microbiology & Biotechnology, 2014.
2. Circular Polymerase Extension Cloning (CPEC)
Abstract: Circular polymerase extension cloning (CPEC) is based on polymerase overlap extension and is therefore free of restriction digestion, ligation or single-stranded homologous recombination. CPEC is highly efficient, accurate and user friendly. Once the inserts and the linear vector have been prepared, the CPEC reaction can be completed in 10 min to 3 h, depending on the complexity of the gene libraries.
☞☟
Introduction
CPEC is a single-tube, one-step reaction that normally takes 5–10 min to complete for everyday laboratory cloning. The method is directional, sequence independent and ligase free. It uses the polymerase extension mechanism2 to join overlapping DNA fragments into a double-stranded circular form, such as a plasmid. In a typical CPEC reaction, linear double-stranded insert(s) and vector are first heat-denatured; the resulting single strands then anneal with their overlapping ends and extend using each other as a template to form double-stranded circular plasmids. In CPEC, all overlapping regions between insert(s) and the vector are unique and carefully designed to have very similar and high melting temperatures (Tm), which eliminates vector reannealing and concatenation of inserts and makes CPEC very efficient and accurate. The low concentrations of fragments in the reaction favor plasmid circularization and effectively prevent plasmid concatenation. After the CPEC reaction, the perfectly formed double-stranded circular plasmids, with one nick in each strand, can be directly transformed into competent host cells. 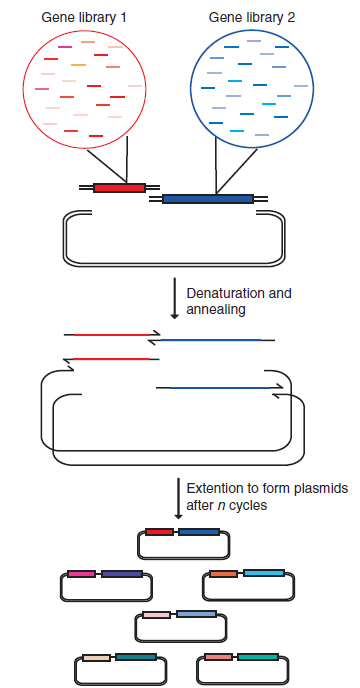 1. Design of overlapping sequences between vector and insert(s).
The key to successful CPEC library construction and multiway CPEC is to carefully select and design the overlapping sequences between the vector and the insert(s) so that all overlapping regions share very similar Tm. The Tm of the overlapping regions should be as high as possible (ideally between 60 and 70oC) to maximize hybridization specificity. The Tm of all overlapping regions in the final CPEC assembly reaction should match each other as closely as possible, ideally with differences within ± to 3oC. This will help eliminate mis-hybridization and ensure highest cloning efficiency and accuracy. The length of the overlapping region, typically between 15 and 35 bases, is of secondary consideration and is dictated by the Tm. Standard PCR primer selection rules and software can be applied to facilitate the design process. If PCR is used to introduce overlapping regions with the vector or with adjacent fragments, primers should be designed to include at least two parts, each hybridizing to one end of the two neighboring fragments to be joined. If an additional short sequence needs to be inserted between two existing fragments, it can be simply included in the primer design between the two overlapping regions.
2. Preparation of linear vector.
The linear vector can be prepared most conveniently by PCR amplification using primers designed to introduce overlapping regions with the insert(s), as described below in the Procedure; this approach offers the most flexibility in selecting cloning sites. If a convenient restriction site is available on the vector that does not introduce unwanted sequences, restriction digestion can also be used to linearize the vector. To prevent carryover of undigested or intact circular vector templates, we recommend gel purification of the linear vector after PCR amplification or restriction digestion. In addition, to eliminate the effect of any residual carryover vector, we recommend using an empty vector as the starting material for PCR amplification or restriction digestion; this way, any carryover of the empty vector will not interfere with downstream functional assays or screens.
3. Preparation of inserts.
The inserts can be a single gene, a gene library, multiple genes or even multiple libraries. They can be isolated from natural sources or synthesized on the basis of in silico designs. Irrespective of whether they are single sequences or libraries, ensure that they share overlapping regions with the vector or neighboring fragments, as described above. If PCR is used to prepare the inserts, as described in the Procedure below, a high-fidelity DNA polymerase (e.g. Phusion DNA polymerase) is preferred in order to minimize the introduction of mutations or addition of an extra nucleotide at the ends of amplified products. Gel purification is sometimes necessary to ensure purity of the products.
4. CPEC cloning.
In the final CPEC assembly and cloning reaction, prepared linear vec

Reference: Quan J, Nature Protocols, 2011.
3. ClonExpress MultiS One Step Cloning Kit
Abstract: ClonExpress One Step technology is a simple, fast and highly efficient cloning kit which is based on homologous recombination technology. It allows to directly clone any amplified product(s) to any linearized vector, at any site.
☞☟
Introduction
ClonExpress MultiS One Step Cloning kit is a new version cloning kit based on ClonExpress One Step Cloning technology. Exnase MultiS and reaction buffer supplied in this kit are especially optimized for multi-insertion seamless cloning (MultiS for short). With the help of this kit, sequential assembly of up to five insertions can be realized in a single reaction. Additionally, Exnase MultiS is also compatible with the endonuclease digesting reaction and the PCR reaction. Thus, the digesting products or PCR products can be directly applied in recombination reaction without purification, which greatly simplifies the experimental procedures.
Firstly, the expression vector will be linearized at the cloning site of choice. A small sequence (15-20 bp) overlapped with the end of the cloning site will be added onto the insert through a PCR step. After the inserts and the linearized vector are mixed in the presence of Exnase for only 30 min, the cloning DNA products can be directly subjected to E.coli transformation with true positive rate over 95%.
Steps

1. Constructing gRNA plasmid and donor DNA
To construct gRNA plasmid, a set of primers were used to PCR amplify the pGRB backbone. The 20 bp spacer sequence specific for each target was synthesized in primers. The PCR product was then self-ligated using Golden Gate Assembly to obtain the desired gRNA plasmid.
Donor dsDNA usually had 300–500 bp homologous arm on each side unless otherwise noted. To construct donor dsDNA, two homologous arms and the sequence to be inserted were separately amplified and were then fused together by fusion PCR. Gel purification of the PCR products prior to electroporation is necessary. All primers, including those used as donor ssDNA, were ordered from Genewiz.
2. Genome editing procedure
Electrocompetent cells with pRedCas9 plasmid were generated previously. In brief, a single colony or 100 times diluted overnight culture was inoculated in 3 mL LB medium (or 100 mL LB for large scale preparation) and was grown at 32oC to OD∼.5. The cells were then washed twice with cold-sterile ddH2O in test tubes. One microliter of cells were finally concentrated 20-fold into 50 μL volume for each reaction. Unless otherwise noted, 100 ng donor dsDNA (or 1 μM ssDNA) and 100 ng gRNA plasmid were added in each electroporation reaction. Bio-Rad MicroPulser was used for electroporation (0.1 cm cuvette, 1.80 kV). Cells after electroporation were immediately added into 3 mL LB and recovered for 3 h prior to plating. For plasmid curing, correct colonies were inoculated in LB containing 0.2% L-arabinose and cultivated for 6–8 h or overnight.