Design of our Patch

The patch we designed is an innovative composite detection nanomaterial composed of three layers : a bottom cellulose-based layer (support), an intermediate protein-based layer (linker), and a top antibody-based layer (detection) (Fig.1). To implement our project, we had to design and create each layer of our innovative patch.

Figure 1. An innovative and composite multi-layered patch for detection of mosquito-borne pathogens.

We first characterized each layer separately before testing the combined patch at the end of the project.

Our patch is the solid support of immunological reactions to detect viral proteins. We chose cellulose as the main component of the patch since it does not interfere with immunological reactions. We needed to use commercial crystalline cellulose to ensure the binding of the protein layer. We compressed our modified cellulose powder with a press and we shaped the patches by using a steel mold that we machined with circular slots (of various diameter)[1].

Since the cellulose-based patch alone could not detect mosquito-borne pathogens, we used a multifunctional fusion protein to make it stronger. This protein is bonded to the cellulose-based patch and made it stronger by bio-condensing silicic acid into silica and fixing specific antibodies. Therefore, we took advantage of the silica-binding peptide (designated by Si4), the B domain of staphylococcal protein A (designated by BpA), and the cellulose-binding domain of cellulose-binding protein A (designated by CBPa). Since it was important that Si4 and BpA were not close in order to avoid steric hindrance of the paratope by condensated silica, we designed the fusion protein Si4-CBPa-BpA as protein C (Fig 2). 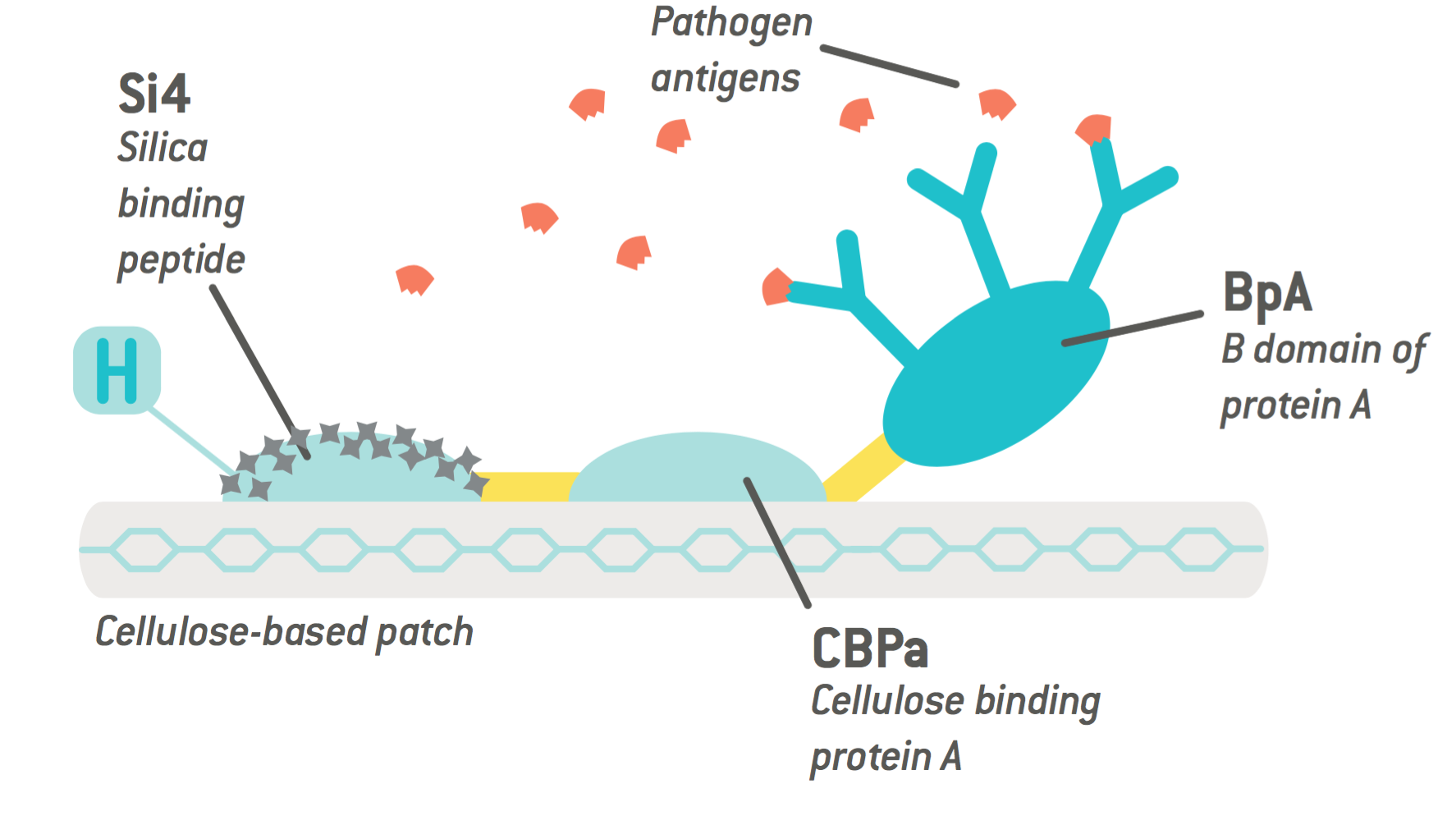 To produce the protein, we had to assemble the corresponding genes of each part of the fusion protein by using preexisting iGEM BioBricks. In fact, we assembled BBa_K1028000 (encoding for Si4, from iGEM Leeds 2013), BBa_KBBa_K863110 (encoding for CBPa, from iGEM Bielefeld-Germany 2012), and BBa_K103003(encoding for BpA, from iGEM Warsaw 2008), and separated them by using flexible linkers in order to preserve their conformation and their biological activity. To make our protein easy to purify, the sequence of a HisTag was added at the 5’ end, followed by the TEV protease-specific cleavage site sequence to allow the removal of the His-Tag after purification. To be certain of our protein’s expression, we intentionally added ATG initiation codons at the beginning and TAA stop codons at the end of the sequence. Next, cis-regulating elements, such as T7 terminator and T7 promoter, were taken from the pET43.1a(+) vector to flank the composite sequence, and iGEM prefix and suffix were added. BamH I and Hind III restrictions sites were added to the beginning and the end of final sequence, respectively2 (Fig 3).

We optimized the coding sequence for expression in Escherichia coli with Geneious software, and we took the precaution of avoiding restriction sites of iGEM prefix and suffix. By taking advantage of the free 20bp offered by Integrated DNA Technologies (IDT), we sent several sequences to be synthesized which encoded the fusion protein and several control sequences (Table 1).

Once we received DNA sequences, we amplified them by polymerase chain reaction (PCR) and cloned them into TOPO vectors[3] (Fig 4). Since Taq polymerase contains a terminal-desoxynucleotidyl transferase activity, adenine were added on each extremity of the PCR products, allowing TOPO cloning. Resulting “TOPO-insert” plasmids were introduced into competent TOP 10 Escherichia coli by heat-shock transformation, and bacteria were grown onto LB plates added of ampicillin to increase plasmid amount. Since resistance gene to ampicillin is present in the TOPO vector, only transformed bacteria were selected. After growth, bacteria were harvested and plasmidic DNA extracted. Following restriction enzymatic digestion by using Xba I/Hind III enzymes couple and electrophoresis, we checked that extracted plasmids contain insert, and extracted it from the gel. After that, we cloned this insert into digested and dephosphorylated expression vector pET43.1a(+), and repeat the same procedure until the plasmidic DNA extraction and verification by electrophoresis. To produce our protein, we transformed specifically dedicated BL21(DE3) Escherichia coli with “pET43.1a(+)insert” to produce high amounts of proteins. We cultured them and when OD600 nm was close to 0.7, we induced our protein expression by adding isopropyl β-D-1-thiogalactopyranoside (IPTG) in the growth medium[4]. It was important to be sure that our protein expression was not constitutive since we didn’t know the potential toxic effect of it onto the bacteria metabolism. Bacteria were harvested and our own protein purified by Fast Pressure Liquid Chromatography (FPLC) by using a Nickel-tagged and plastic-based column[5]. We detected the presence of our protein by sodium dodecyl sulfate – polyacrylamide gel electrophoresis (SDS-PAGE), and protein concentration into fractions of interest was determined by Bradford assay. In order to be sure that it is our own fusion protein, we sent SDS-PAGE bands to mass spectrometry platform of Institut Pasteur, and performed Western Blot by using anti-HisTag antibody (Fig. 4). Moreover, Si4 and CBPa parts were independently validated and characterized into our fusion protein by performing functional experiments: biosilification and cellulose-binding tests. Unfortunately, we didn’t have the time to test BpA part. 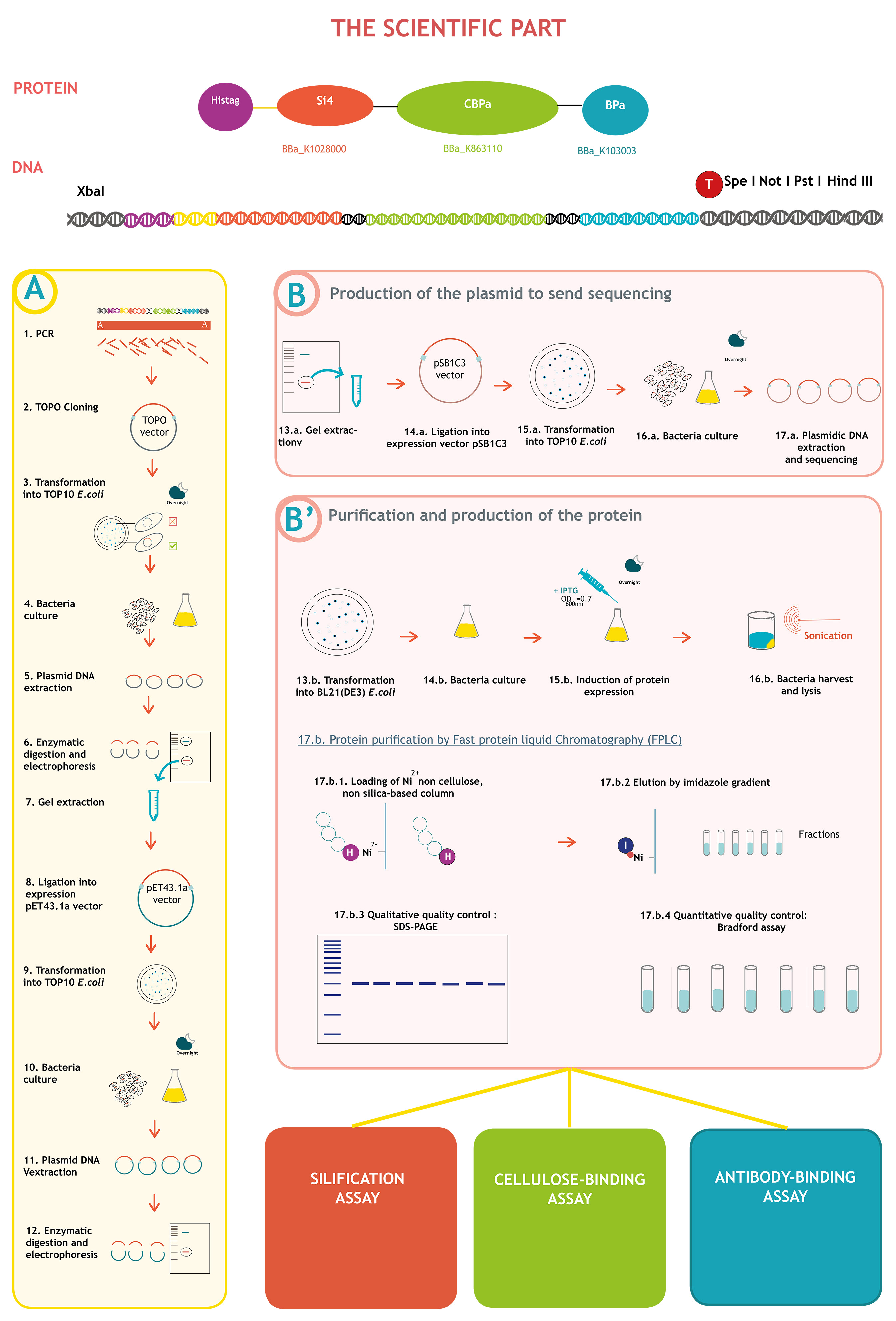 Figure 4. Global view of our project.

Si4 : To assess the ability of our protein to biocondense silica, we activated the precursor of silicic acid, tetraethyl orthosilicate (TEOS), by hydrochloric acid (HCl) and incubated the mix with our protein for 2h. After that, silica formation is estimated by visual control, and remaining free silicic acid was titrated following molybdate assay from iGEM Minnesota 2011(Fig. 5). 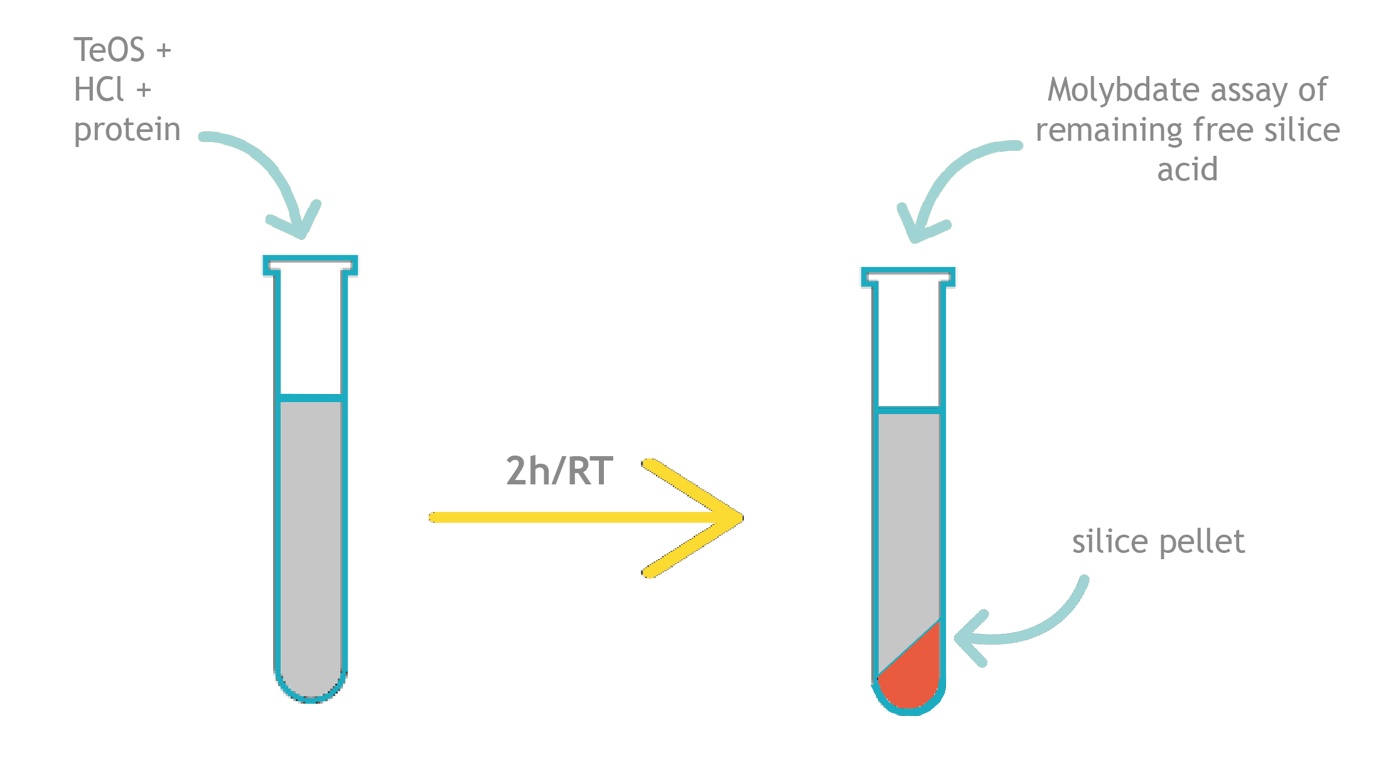 CBPa : To assess the ability of our protein to bind to cellulose, we mixed different forms of cellulose powder with our protein, in presence of a non-specific competitor protein : bovine serum albumin (BSA). After 1h, the mix is centrifuged. The supernatant and pellet are harvested and examined by SDS-PAGE (Fig. 6).

In order to test whether we can detect mosquito-borne pathogens by immunodetection, we tested antibody-antigen recognition onto PVDF commercial membranes by using E2 envelope protein of Chikungunya virus (E2/CHIKV) and monoclonal E2-specific antibody 3E4. Single E2/CHIKV was conjugated with horseradish peroxydase (HRP) and efficiency of the detection method was tested (Fig. 7A). Then, specificity test was assessed by performing detection of conjugated E2/CHIKV among an excess of conjugated BSA (Fig. 7B). After that, since mosquito proteins can interfere with the E2/CHIKV recognition, we substituted BSA with conjugated mosquito lysate proteins (Fig. 7C). Finally, "real-world" test was performed by detecting 17D vaccine strain of Yellow Fever virus (YFV) into infected mosquitoes (Fig. 7D) by a coach with the required safety access to an Institut Pasteur BHS facility. 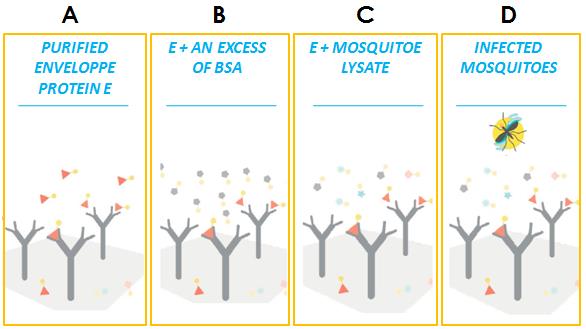 We made the composite protein-cellulose-based patch by mixing cellulose powder and the pre-silicated fusion protein, and compressing it on a Darragon SE 10 (200 bars, 100 kN, 10T). To check the rigidity gain of the silicated patch, we can characterize the rigidity in traction and compression by measuring the Young’s modulus and the rigidity in shearing by measuring the shear modulus. Then, we coated specific antibodies to CHIKV onto the composite patch, allowing us the detection of purified CHIKV envelope protein.

You can download here a short course on materials resistance:

[1]Cellulose is very hard to shape: it is not soluble, and pure commercial crystalline cellulose is a dry powder. We first tried to prepare a cellulose colloid, spread it as a thin layer and let the solvent evaporate, but the results did not meet our requirements at all. [2]Hind III and BamH I were used in order to ligate insert into pET43.1a(+) but since we changed genetic constructions by deleting T7 promoter, we used Xba I and Hind III for cloning. We deleted the T7 promoter from our insert in order to avoid two successive promoters once ligated into pET43.a(+). [3]We didn’t achieve cloning into pET43.1a(+) because we had not enough inserts. So we decided amplifying the insert by PCR and TOPO Cloning before cloning into pET43.a(+) [4]We realized that induction by 0.5 mM IPTG for 3h at 37°C was not sufficient to produce our protein, that’s why we decided doing it by 0.3 mM IPTG overnight at 15°C (allowing folding of the fusion protein). [5]Since most of lab material is made from cellulose, we substituted sepharose-based by plastic-based Ni-tagged Biorad Nuvia column and cellulose acetate-based by nylon-based filters.