Photoacoustic imaging is a technique in which contrast agents absorb photon energy and emit signals that can be analyzed by ultrasound. Currently, photoacoustics is used to image blood vessels because heme is a natural contrast agent found in blood. Photoacoustic imaging also provides a non-invasive alternative to current diagnostic tools used to detect internal tissue inflammation. In previous literature, hypoxia and nitric oxide have both been discovered to molecularly indicate gut inflammation, and iRFP670, 713, anacy and cyan have been found to emit wavelengths that are different from heme and can penetrate tissue with near-infrared wavelengths. Therefore, our goal is to report inflammation and cancer in the gut through photoacoustic imaging of engineered E. coli that express bacterial pigment violacein, as well as near-infrared fluorescent proteins iRFP670 and iRFP713.

pBAD is a very well-characterized expression system in E. coli. pBAD normally works by arabinose induction: araC, a constitutively produced transcription regulator, changes form in the presence of arabinose sugar, allowing for the activation of promoter pBAD. Therefore, we formed genetic circuits consisting of the pBAD expression system and iRFP670 and 713 to test the inducibility of our iRFPs.

Figure 1a. Construct of arabinose-induced iRFP or violacein. In the presence of arabinose, araC activates pBad. 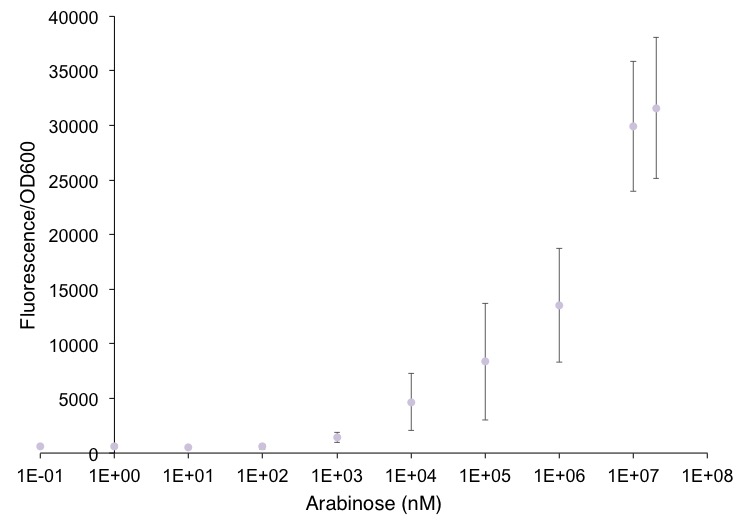 Figure 1b. Fluorescence of iRFP 670 significantly correlates with arabinose levels. 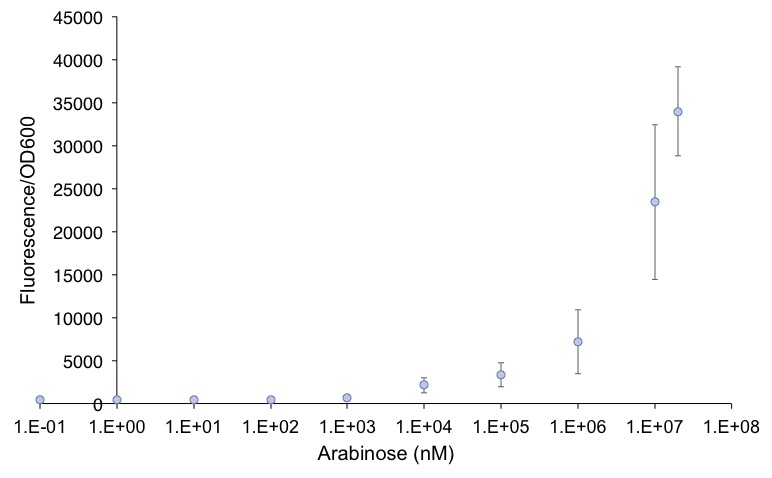 Fluorescence levels emitted by the iRFPs increase significantly when placed in wells containing increasing concentrations of arabinose. The fluorescence levels increased 80-fold between 0.1 nM to 50 mM. This correlation suggest that our selected iRFPs fluoresce sufficiently when promoters are induced by the environment.

The next step was to test the nitric oxide induction of iRFP fluorescence. We used a genetic circuit consisting of a constitutive promoter that always expresses Part:BBa_K554003, which encodes for the expression of a SoxR. In the presence of nitric oxide, SoxR changes form to activate the promoter SoxS, which in turn is supposed to activate the expression of the iRFPs. Thus, for the next assay we added DETA/NO, a nitric oxide adduct in the presence of water. 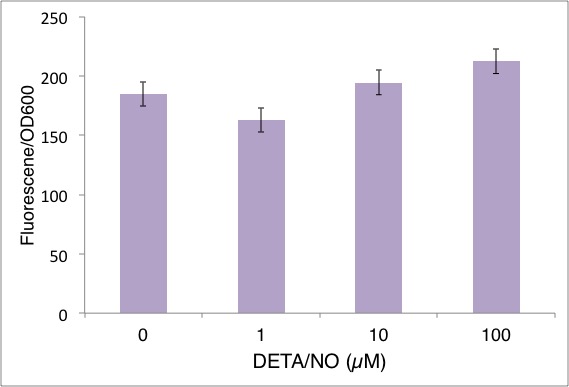 Figure 2b. Fluorescence levels of iRFP 670 do not differ significantly upon increasing concentrations of the nitric oxide adduct DETA/NO. 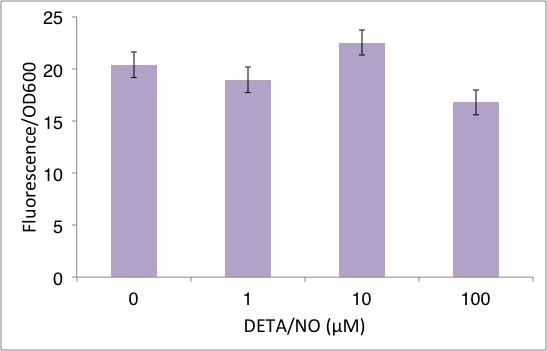 Figure 2c. Fluorescence levels of iRFP 713 do not differ significantly upon increasing concentrations of the nitric oxide adduct DETA/NO.

These graphs show no significant difference of fluorescence/OD600 between DETA/NO concentrations.

Transcription of the fdhf promoter is regulated by an RNA polymerase with sigma factor 54 whose binding is dictated by presence of an additional activator complex consisting of FhlA and formate. Only when the FhlA-formate complex is present will the sigma-54 polymerase initiate transcription. This process is induced by formate, but is also heavily repressed by presence of oxygen, giving it characterization as a hypoxia sensor.

Figure 3a. Construct for hypoxia induced transcription of iRFP or violacein using the narK promoter.

However, we observed the opposite result. A decreased fluorescence for both iRFP constructs in both promoters was measured when exposed to hypoxic conditions. 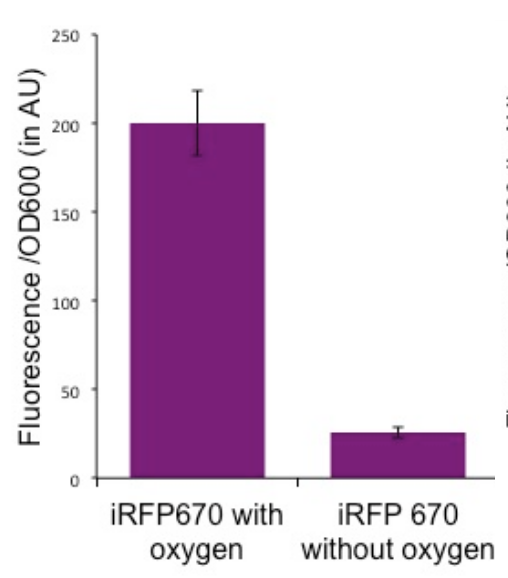 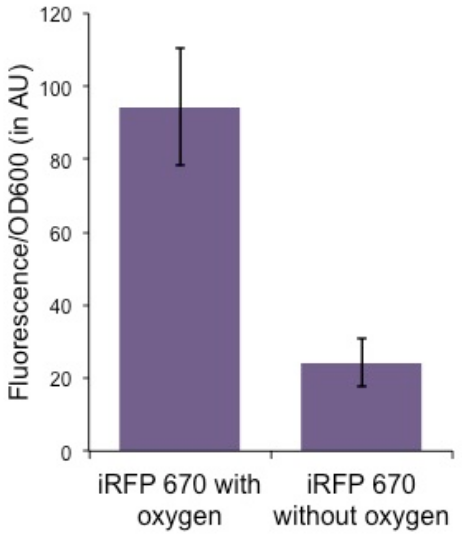 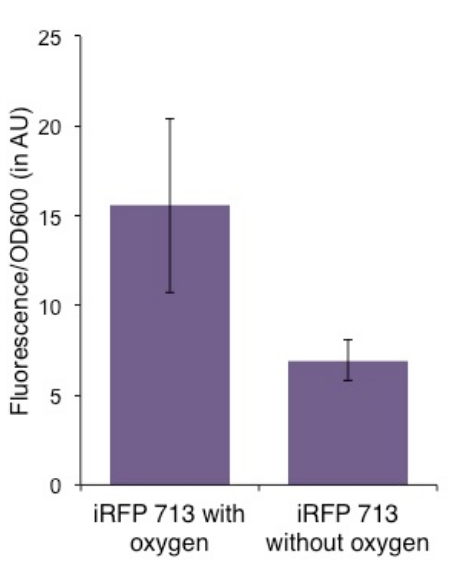 **For materials and methods for hypoxia assay, see July and October lab notebook

Violacein is a fluorescent protein for in vivo photoacoustic imaging in the near-infrared range and shows anti-tumoral activity. Violacein has high potential for future work in bacterial tumor targeting. We have succeeded in constructing violacein. Refer to “Future Directions.” 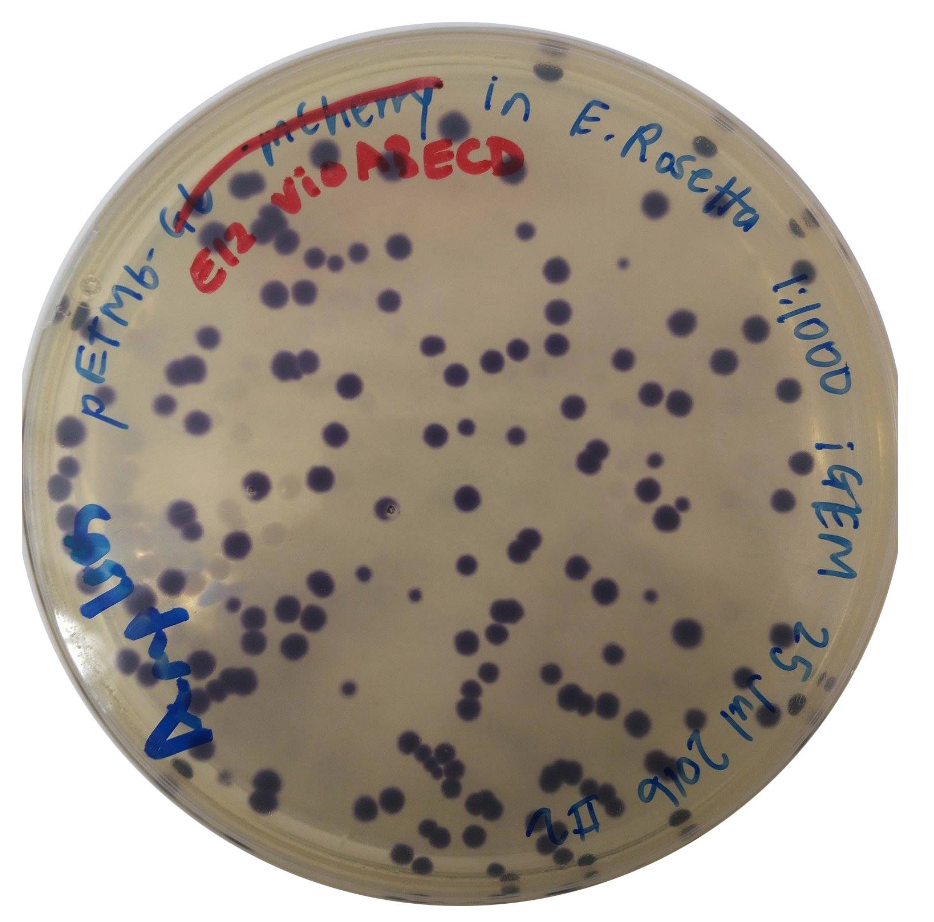