We had many options for the protecting group on leucine. After much research into the properties, environmental availability, and cost of each protected leucine option, we decided on three possibilities. These included proline-leucine (pro-leu), N-carbobenzyloxy-leucine (CBZ-leu), and N-methoxycarbonyl-leucine (N-moc-leu). Pro-leu and CBZ-leu were our first two choices, and N-moc-leu was added as an option after pro-leu was discounted for reasons mentioned below. Two experiments were conducted to determine whether the three protecting groups were appropriate for our purposes.

The first experiment was an uptake test to determine if the cell is able to take up protected leucine from the environment. XL1-Blue strain E. coli cells were incubated in Luria Broth (LB) containing leucine, pro-leu, or CBZ-leu for 24 hours. The cells were washed and lysed, and the purified lysate was analyzed using liquid chromatography-mass spectrometry (LC-MS) to determine if the protected leucine was uptaken into the cell.

Figure 1 shows the LC-MS identifying peaks for each standard. 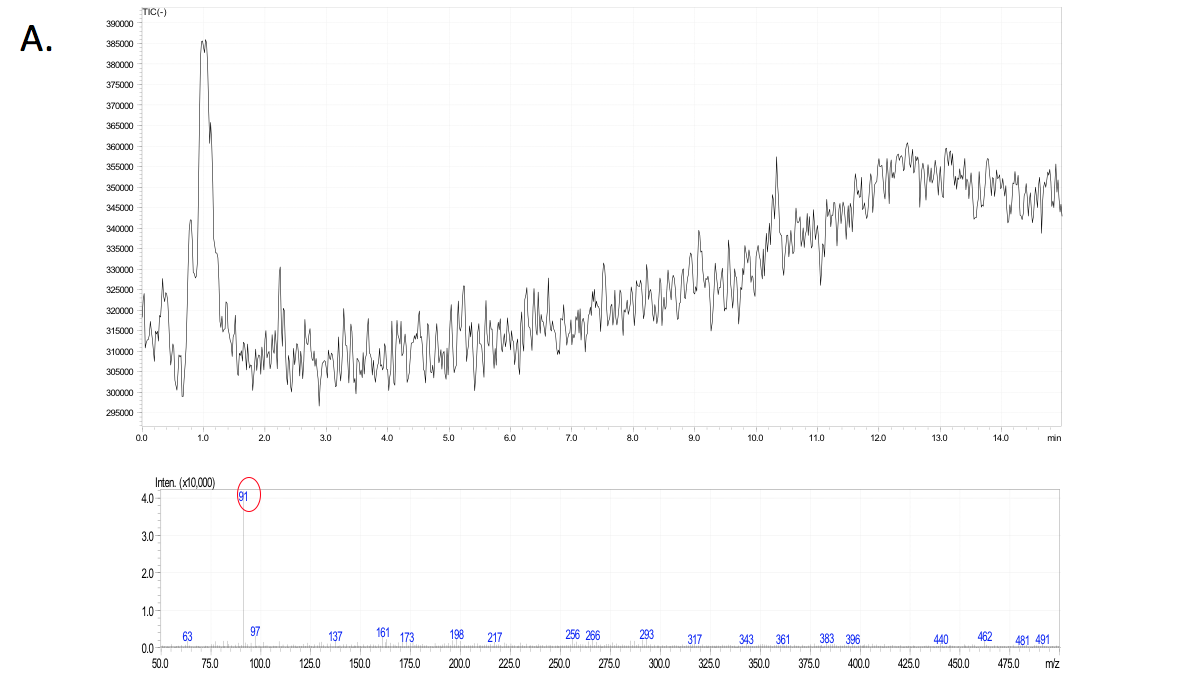 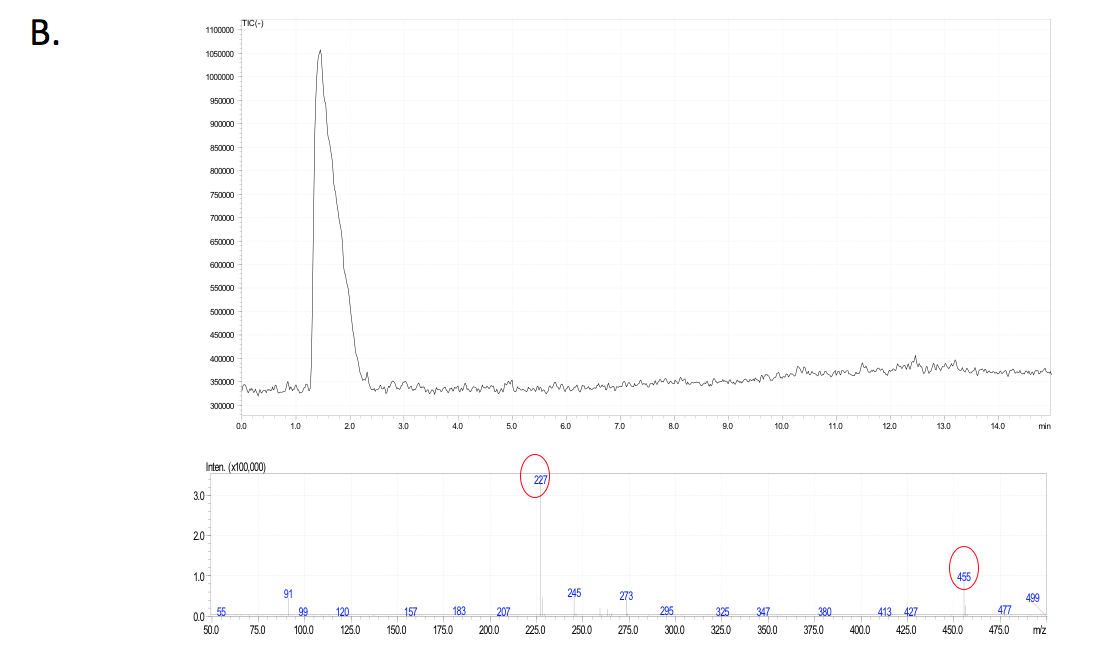 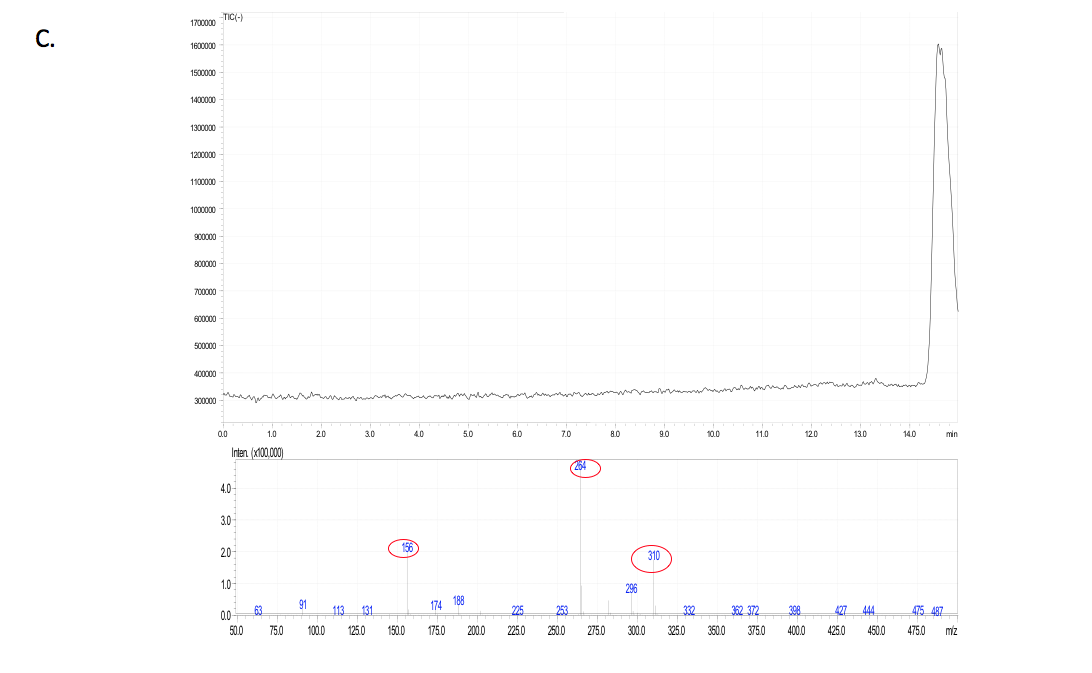 
The positive control leucine uptake condition showed a peak at 91 m/z at 1 minute (Figure 2). The pro-leu condition did not have the indicative peaks at m/z 227 and 455 around the 2 minute mark (Figure 3). At 13 mins, CBZ-leu had the identifying spikes at m/z 264 and 310, but also had a large spike at 91 and 215 (Figure 4). These data indicate that pro-leu was not uptaken by E. coli while CBZ-leu was tentatively uptaken. 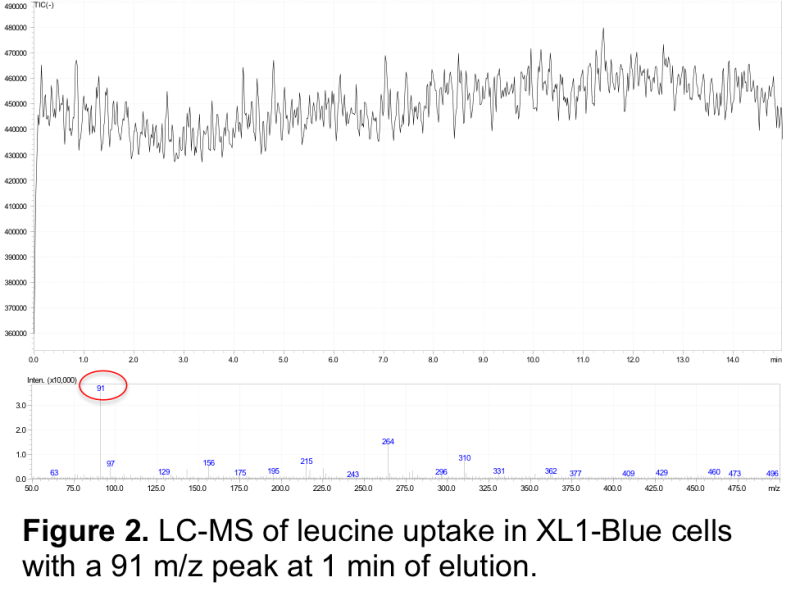 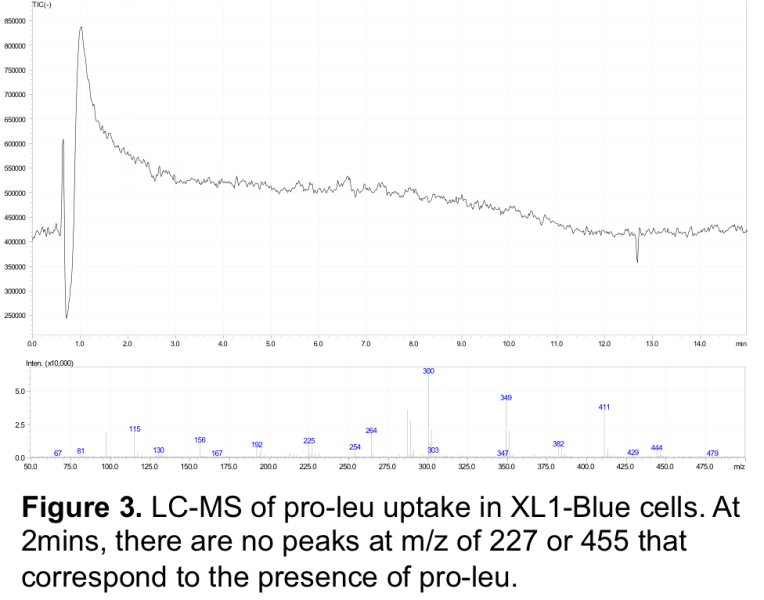 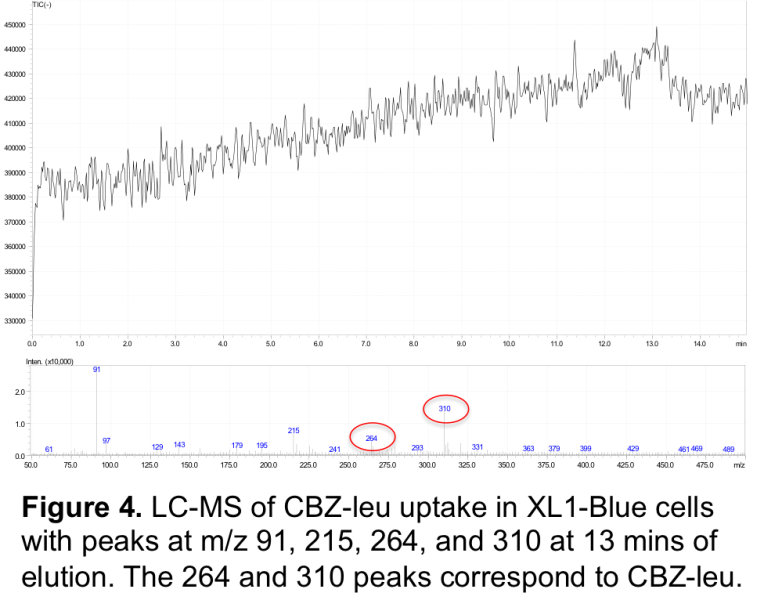 The second experiment was a growth test to assay whether leucine auxotrophic E. coli can survive on protected leucine. Growth indicated the organism has an intrinsic cleavage enzyme to cleave the protected leucine, and a lack of growth indicated there is no intrinsic enzyme. We wanted to avoid selecting a protecting group that can be cleaved by the cell’s own mechanisms to prevent cleavage of the protecting group prior to charging of the leucyl-tRNA. JW5807-2 leucine auxotrophic strain was grown in five different conditions:

The cells were grown for 47 hours and the concentration of cells were measured at OD600 in a Nanodrop at 12, 18, 24, and 47 hour timepoints. The cells in the positive control with leucine all grew, but there was little to no growth in the CBZ-leu and pro-leu conditions (Figure 5). 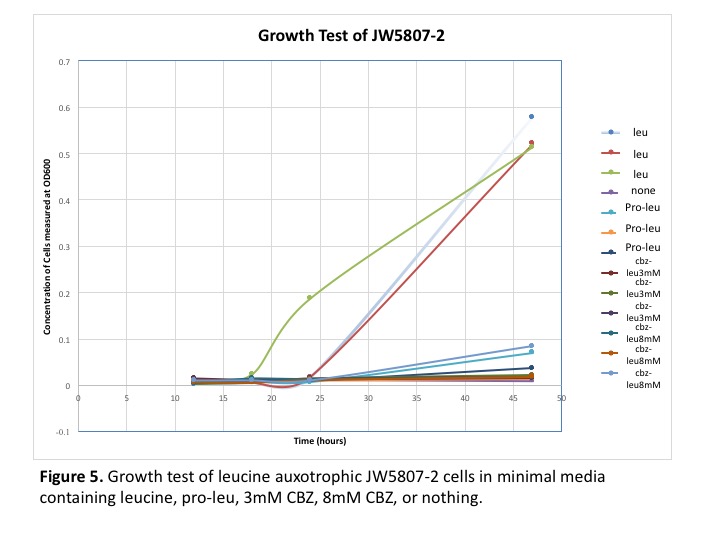 However, after conducting the liquid growth experiments, we realized the experimental method left significant room for error because each concentration measurement was an opportunity for contamination of the culture. Furthermore, we realized at this point that pro-leu is not a good choice for a protecting group because of its availability in the environment. For our biocontainment system to be effective, the organism must not be able to scavenge protected leucine from the environment, and as a dipeptide, pro-leu can be easily accessed from the breakdown of peptides. Intrinsic proteases can likely cleave pro-leu, too. Additional research also revealed that pro-leu is toxic to E. coli cells, so E. coli have evolved a mechanism to exocytose pro-leu. Thus, we abandoned the use of pro-leu for future experiments and tested N-moc-leu instead.

To confirm the results of the growth test using better experimental design, we decided to streak JW5807-2 cells on minimal medium agar plates of 5 different conditions:

Growth on the plates were checked after 24 hours. Growth was present on the positive control plates containing leucine. There was no growth on the negative control plates or any of the experimental plates. The results from the N-moc-leu plates are shown in Figure 6. These results demonstrated that E. coli cells do not have an intrinsic cleavage mechanism for CBZ-leu or N-moc-leu and cannot use these protected forms of leucine for survival. 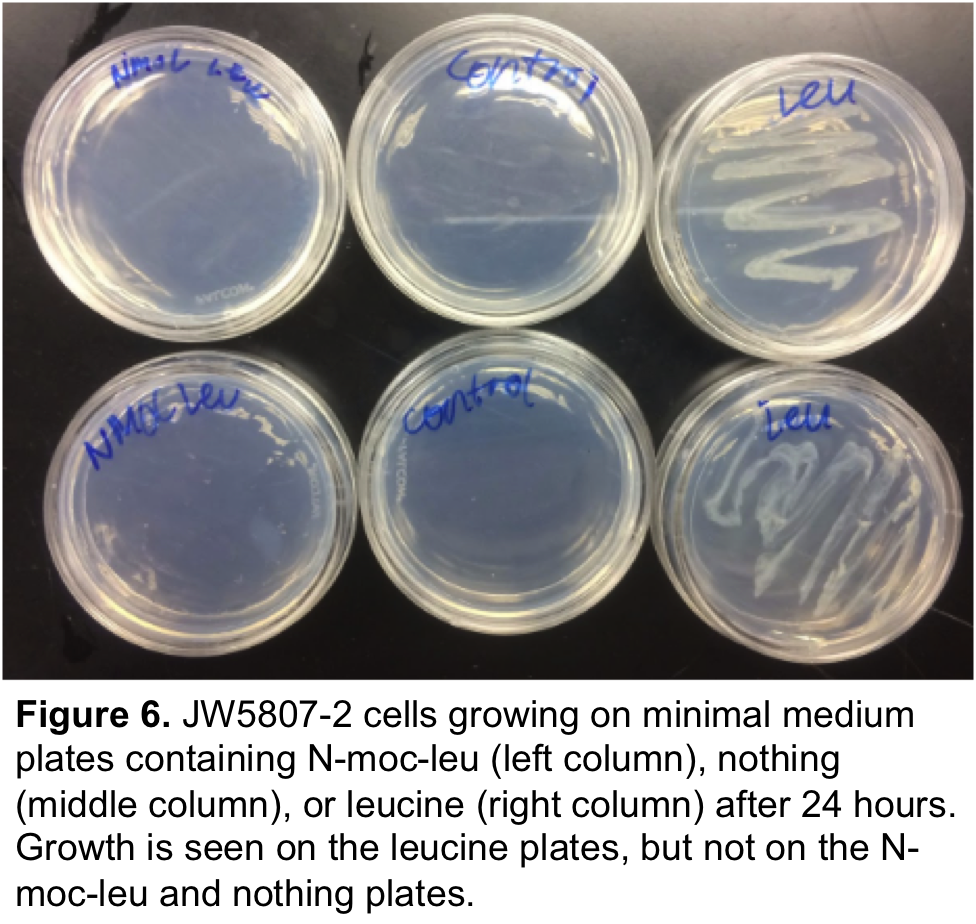 The top two enzyme choices, CBZ-leu and N-moc-leu, were presented to the modeling team who modeled mutagenesis of the leucyl-tRNA synthetase to best confer complementarity with the protected leucine in the catalytic site. Given the time restraints, the modeling team was only able to thoroughly obtain data for a synthetase that conferred complementarity with CBZ-leu. However, preliminary data from modeling with N-moc-leu indicated that it required fewer amino acid residue changes when compared to using CBZ-leu. Fewer amino acid residue changes allows for easier reversion of the mutant to the wild-type synthetase. Therefore, since we had better modeling data for CBZ-leu and modeling indicated that CBZ-leu was the more secure form of protected leucine for our biocontainment system, we opted to use CBZ as our leucine protecting group. 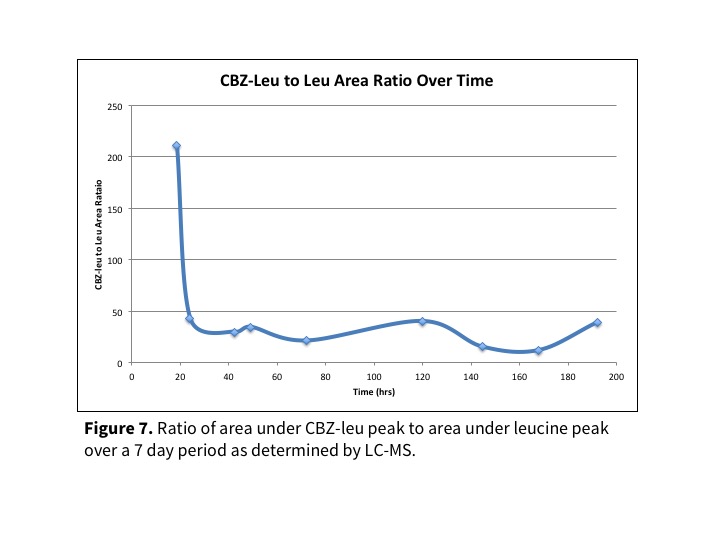 Untransformed JW5807-2 cells were also streaked onto a minimal media agar + CBZ-leu plate. The plates were qualitatively assessed for growth. There was no growth on the negative control plate or the untransformed JW cells on CBZ-leu plate, growth on the positive control plate, and some growth on the CBZ-leu plate (Figure 8). The presence of growth of the transformed cells on the CBZ-leu plate but not on the negative control plate suggests the cleavage enzyme did cleave the CBZ protecting group from CBZ-leu. The reduced amount of growth on the plate in comparison to the minimal media agar + leucine plate indicates a low cleaving efficiency for the enzyme. This serves our biocontainment system well because we do not want the enzyme to be too efficient and cleave the CBZ protecting group from leucine prior to charging of the leucyl-tRNA synthetase with protected leucine -- this could result in our organism dying before it has completed its task because of the inability of the mutated leucyl-tRNA synthetase to use leucine. 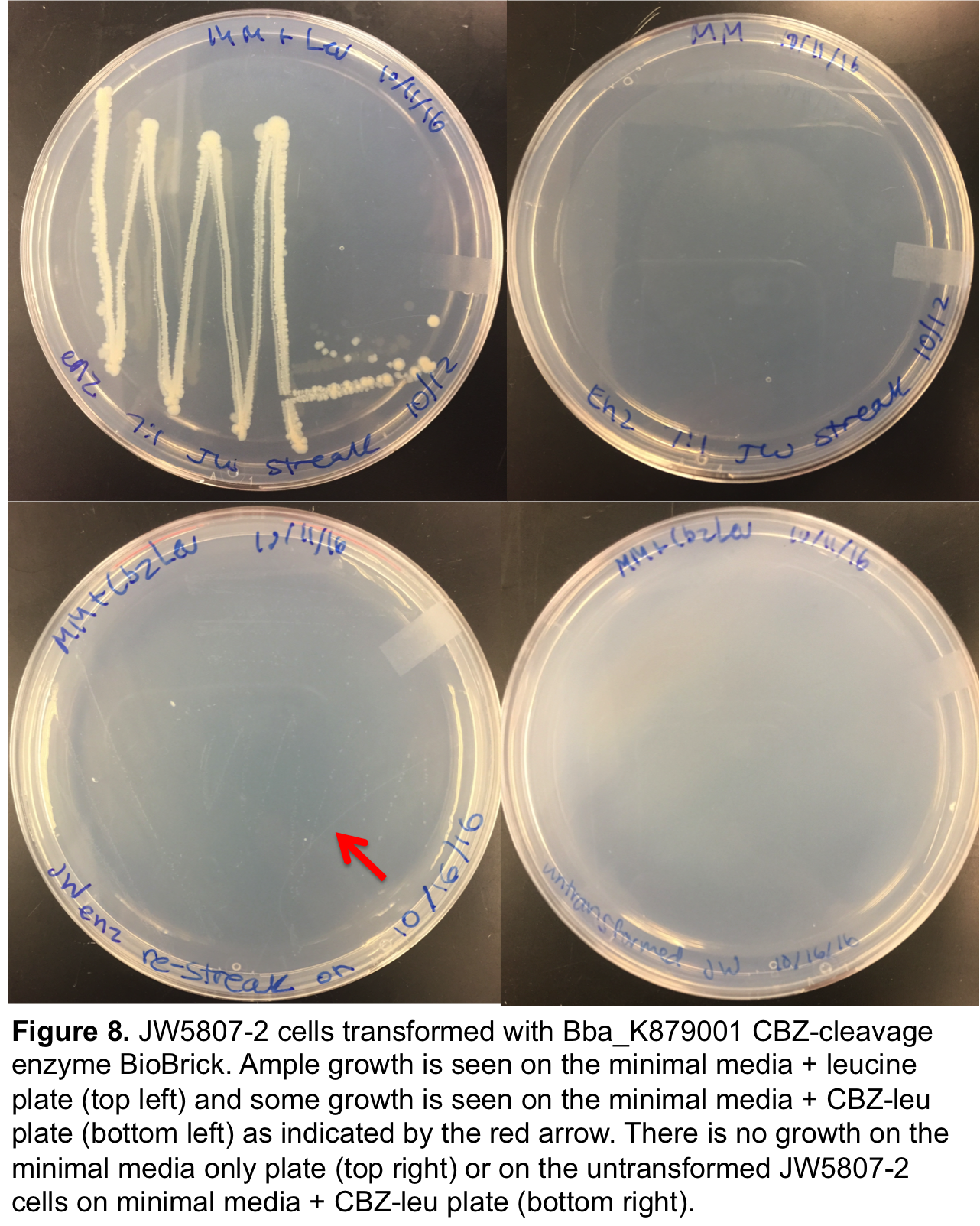