This year our team sought to use free open-source software (ImageJ) to quantify various parts of our project. Not all iGEM teams have access to equipment that can make quantitative colormetric or fluorescence measurements (including our team!). We therefore decided to use the tools we did have, in conjunction with ImageJ, to see if it was possible to make quantitative assessments of images of our results.


The WPI-2016 iGEM team developed a method of measurement through technological constraints. We lacked access to a flow cytometer at our university. However, measuring fluorescence was still required to analyze our experiments. We devised a new way to measure fluorescence of a sample using microscopy and image analysis. By using the program ImageJ, the images taken of fluorescence microscopy were analyzed for brightness on a pixel basis. Through taking images of the same sample of cells at the same exposure times, data was collected and averaged to derive fluorescence data. This data was then checked through a collaboration with the Boston University Weblab team, using their flow cytometer. When compared, the flow cytometry data from BU confirmed the legitimacy of the microscopy image analysis method. A similar technique was also used for the validation of another BioBrick part that focused on arsenic absorption (shown below). The arsenic test kit used a colormetric strip assay which we photographed and quantified using ImageJ. We made two different models for our standard curve based on logarithmic and linear functions.


It is through this ingenuity, making measurement more accessible to more teams, that we believe that our team qualifies for the measurement prize.

Measurement of Fluorescence Intensity through Microscopy


The Excel analysis was performed as follows: 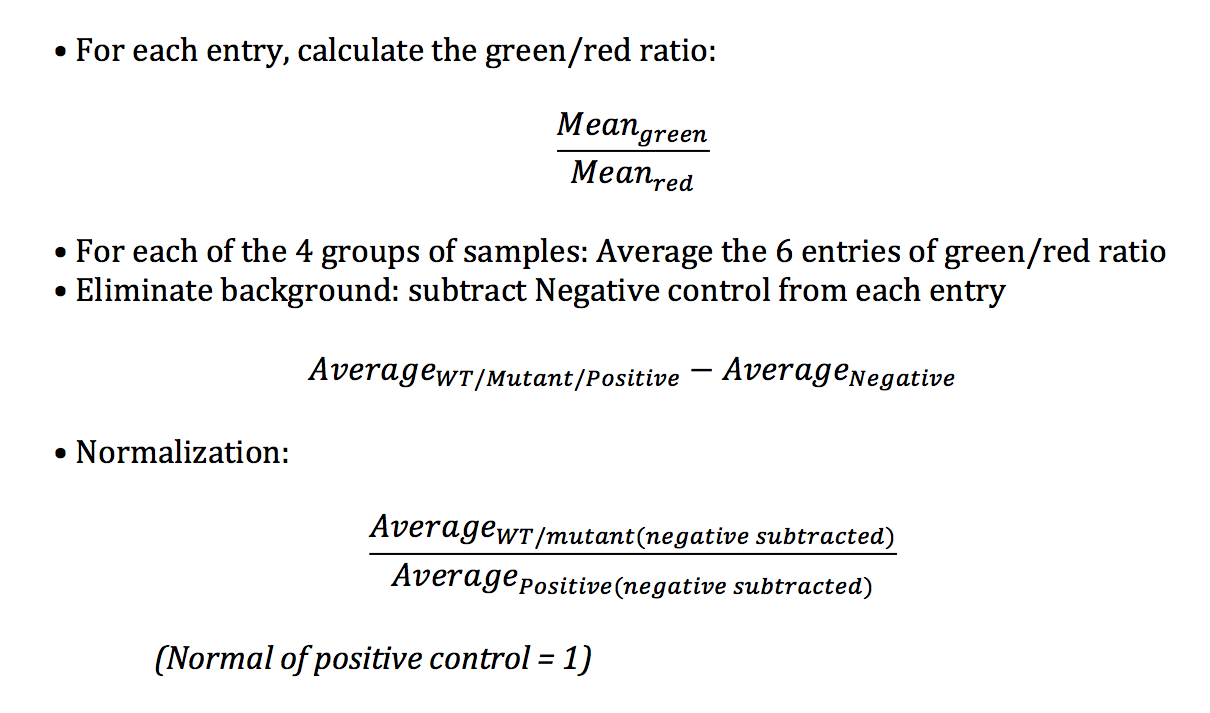 The results obtained by this method can be viewed here.


We tested this part in our experiments, synthetic phytochelatin. This part was previously shown by the 2014 Imperial iGEM team to bind heavy metals including lead, zinc, copper, cadmium, and nickel. We used an arsenic detection kit (Hach USA) to examine the efficiency of the arsenic absorbing by E coli. expressing synthetic phytochelatin (two clones, C1 and C2) versus a negative control RFP. We grew liquid cultures of these overnight, then backdiluted to a standard OD of approximately 0.1, which has a total volume of 28mL, 3mL of the liquid cultures and 25mL of NaArSO2 in LB. The culture was incubated for 3-4 hours, then spun down, and the liquid tested with the Arsenic Kit. The A sample image of the testing result is shown below: 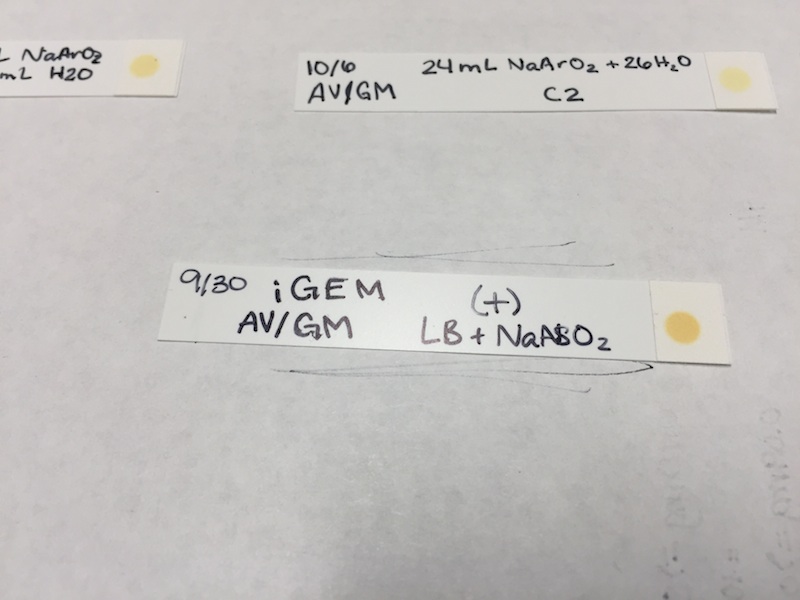 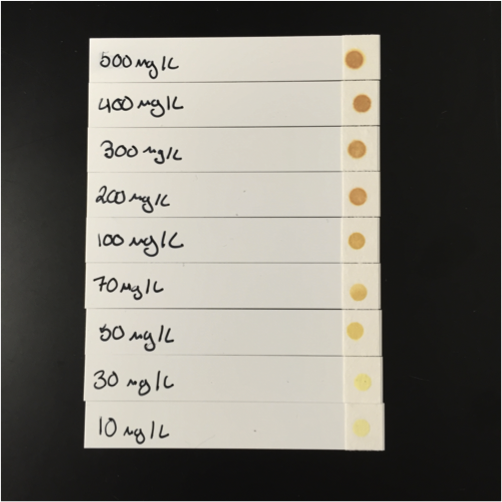 The concentration decided by this method is usually estimated visually; however, we used ImageJ to obtain a numeric value for each shade of the yellow color (in the visual scale above), from which we were able to create two functions that approximate the relationship between color and concentration. For the experimental trials, the color was converted to numbers in the same manner. 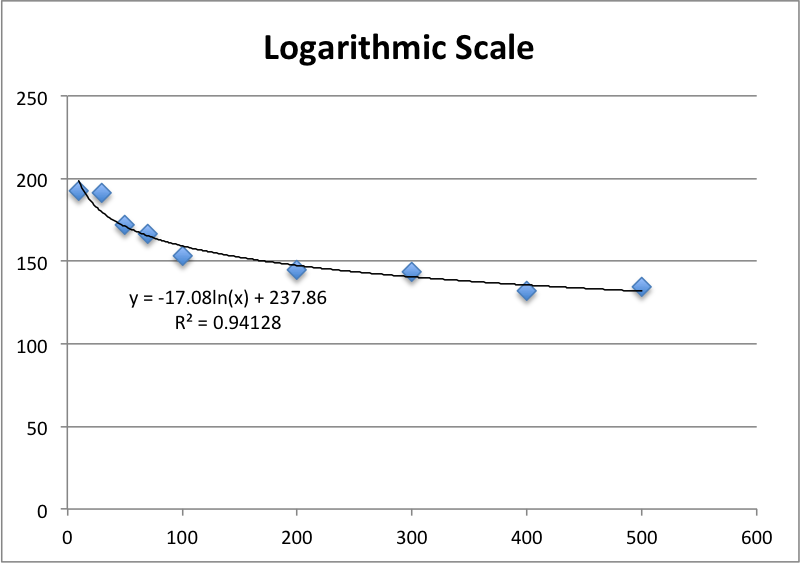 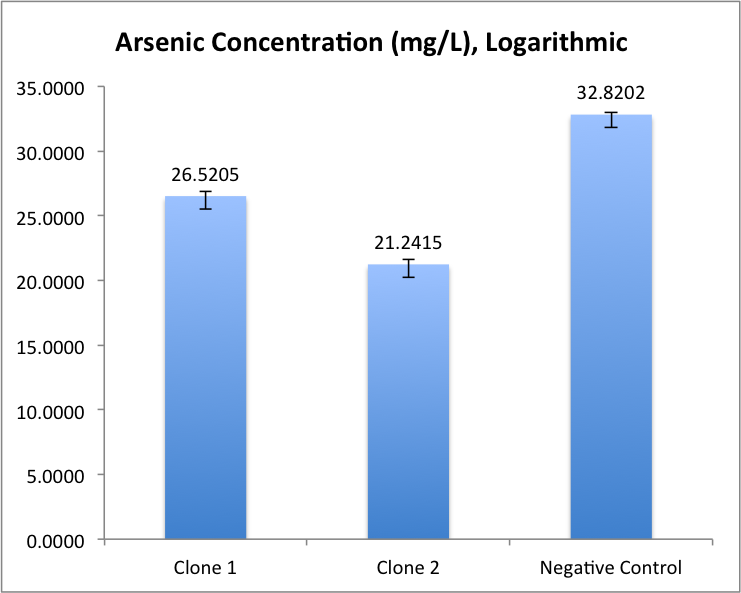 A logarithmic approximation was generated using all data points obtained from the visual scale. The function was then used to solve for the arsenic concentration on each test strip (y = color, x = concentration). The average concentration is shown on the right (0.1 < standard error < 0.4). 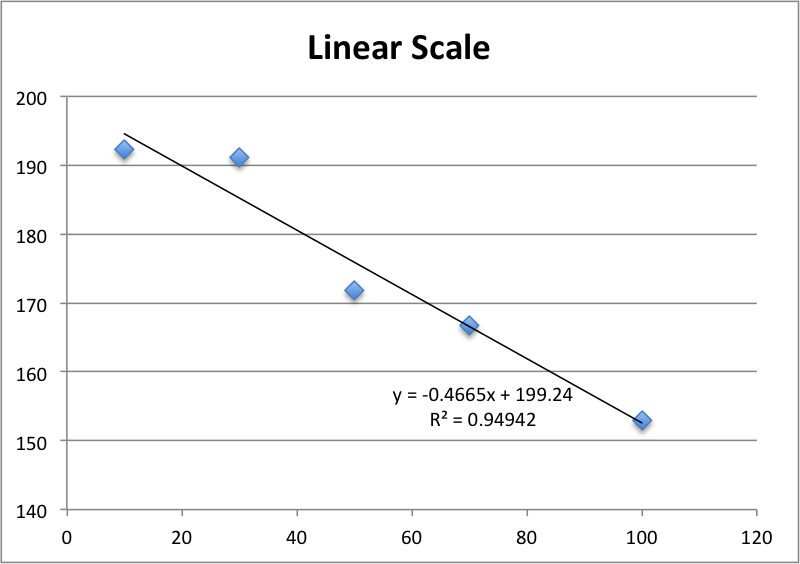 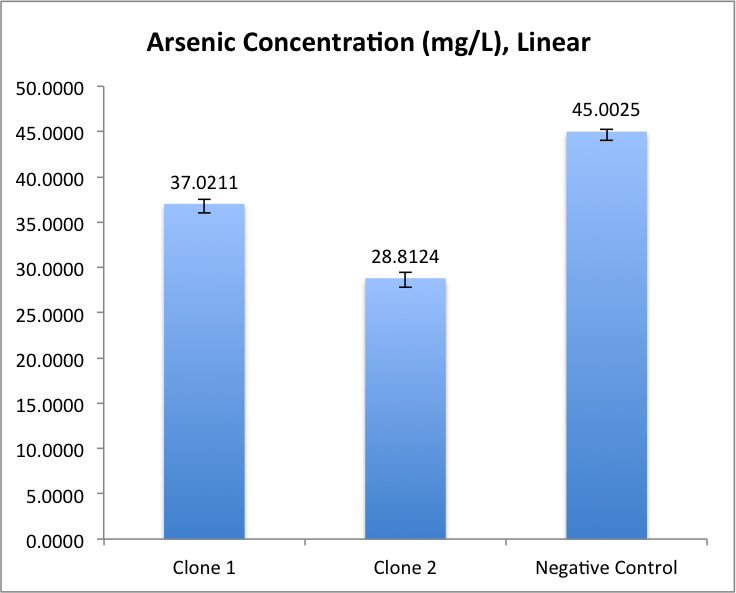 The concentrations calculated using the logarithmic function is lower than using the linear function; however, the results are very consistent. Clone 1 and Clone 2 (with the chelator) show a lower arsenic concentration than the negative control in both results, indicating that they both were able to absorb a certain amount of arsenic in the solution. Also, the results show that despite the many variables in the data collection and analysis process such as photographing test strips in separate images, accuracy of the test strips and evaluate color using a grey-scale, we were able to obtain robust results, therefore proving that such experiments can be quantified reliably with very simple tools such as the ones we used.