The desiccation protection part of our iGEM project involved determining how proteins in extremophile species such as tardigrades could assist bacteria to survive in desiccation circumstances. This is a demonstration of how an attenuated organism vaccine could be protected during shipping to a hot dry climate where there was no cold chain, e.g. sitting on the tarmac of an airport in the hot sun.

We were able to create a representation of this real world situation by drying bacteria on a piece of parafilm in a Petri dish in a 37C incubator for up to 22.5 hours. 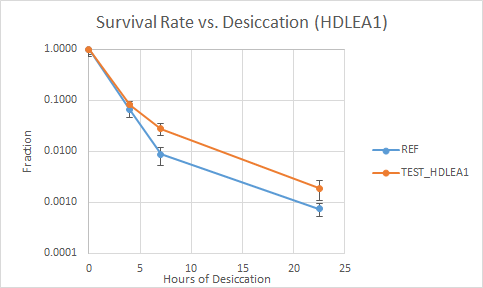 There are many directions in which to expand the work described in this iGEM project.   Pursuit of these plans will be important to better evaluate the research (as well as commercial) potential of these efforts.  These new directions include, but are not limited to: evaluation of other LEA proteins, longer desiccation times, different environmental conditions, alternate genetic circuits, and different strains/species.

Due to time constraints, only one LEA protein could be completely tested in this iGEM competition (the MAHS protein was evaluated in a preliminary fashion).  There are three other LEA proteins that are presently ready for a similar level of laboratory evaluation (MAHS, HDLEA3 and AAVLEA1).  Determination of how these proteins perform will be an important factor in identifying other candidate proteins for improved desiccation survival.

Desiccation evaluation has been limited to less than 24 hours to date for purposes of experimental expediency.  It is not unusual to employ longer periods of desiccation in practice, so the experimental evaluation period will need to be elongated to address this at some point.  Desiccation at alternate temperature and humidity conditions can also be explored.  While reduced temperatures and increased humidity are expected to reduce the rate of desiccation compared to the 37C incubator conditions we have evaluated so far, this may also impact the manner in which LEA proteins provide benefit.

Alternate genetic circuit and strain configurations will need to be considered.  Compared to the maximum strength promoter/ribosome binding site and high-copy-number plasmid systems evaluated so far, the use of weaker promoters/ribosome binding sites/plasmid origins of replication will impact the benefit of LEA proteins under study.  This impact may be beneficial as the reduced metabolic burden of LEA protein production associated with use of these weaker components may result in diversion of cellular energies to other efforts that are important for desiccation survival.  Alternate strains of E. coli (other than the TOP10 K12 strain evaluated so far) and other species of bacteria with undoubtedly result in in different benefit profiles across the proteins under study.

Replication of our iGEM project results requires following the desiccation protocol we used, with particular attention to the items below: