This year our iGEM team had the opportunity to form a trans-Atlantic collaboration with a team based in Marburg, Germany. We sought to determine the evolutionary trajectory of killswitches, with the Marburg team. Throughout this collaboration, the Marburg team assisted in modelling the behaviour and evolution of a previously described MazF killswitch. The Lethbridge team was able to devise a novel protocol for analyzing and accelerating the evolution of killswitches utilizing ultraviolet light. Our group also had killswitch parts synthesized by the Marburg group and improved upon them. This was a valuable collaborative opportunity which we hope to translate into a manuscript related to biocontainment and biosecurity trajectories over time. Our collaboration will be an ongoing one, with the aim of fully characterizing killswitches from a molecular standpoint as well as a computational modeling perspective.

500,000 microjoules of UV light was used to irradiate 200 microlitres of E. coli cells (OD600=0.1) containing an inducible plasmid expressing MazF. Cells were then plated on LB+agar plates containing antibiotic and inducer and grown for 16 hours at 37 degrees Celsius. The number of CFUs obtained after UV irradiation was compared to prior to irradiation and an escape frequency was obtained using this method. Clones which escape the killswitch will be sequenced to examine possible mutations allowing for their escape. Optimization of the amount of UV delivered as well as replication of these experiments are required, however it is a valuable step forward in assessing the evolution of killswitches. 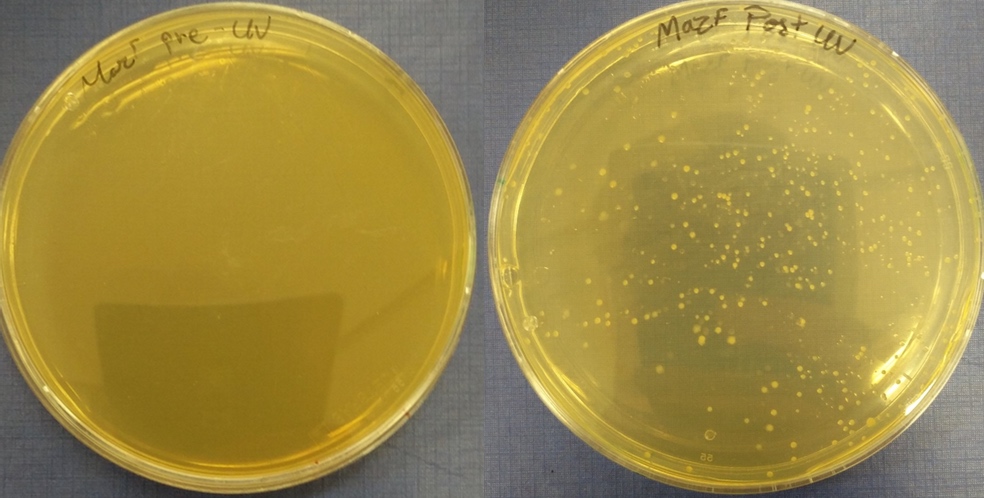 Figure 1. Plates containing the MazF killswitch (K2109111) before and after UV treatment.

Midway through the iGEM season, the Bielefeld iGEM team discovered that our teams share a significant overlap in our projects: both teams are engineering synthetic single domain antibody libraries and using a bacterial two hybrid system for antibody selection. Naturally, we were very interested to collaborate in order to discuss and overcome obstacles in the laboratory and compare our library and selection designs. We discussed these details in five separate video conferencing calls. During the ensuing discussions, we were able to identify several important design considerations, such as theoretical antibody library complexity, methods for maximizing cloning efficiency and selectable markers for positive hits in the two hybrid. Additional details regarding our conversations have been recorded in our joint Collaboration Notebook.

In addition to our discussions, we also exchanged control parts as well as DNAs encoding different target epitopes to raise antibodies against. The Bielefeld Team provided us with their anti-GFP control samples which included an antibody with sub-optimal binding which may be used to assess the sensitivity/stringency of the bacterial-two-hybrid detection system. In turn, we provided the Bielefeld Team with an influenza capsid protein antigen. The purpose of the latter would allow our two teams to compare the efficacy of our respective antibody libraries and/or selection systems to identify antibodies with high affinity and specificity towards a common ligand.

This year we collaborated with the Lethbridge High School iGEM Team. We provided mentorship for the team by teaching them lab skills at a GeekStarter workshop held at the University of Lethbridge. We also helped them troubleshoot issues with their lab work. In return, the high school team helped us by prepping lab materials that we would need for later experiments. As well, we helped each other by working out any issues on our wikis. Overall, collaborating with the high school team solidified the iGEM community around the University of Lethbridge.