Antibiotic discovery may continue to wane in the coming decades because antibiotics aimed for the easiest bacterial targets have already been developed. Considering that bacteria are unlikely to similarly slow in the development of resistance, decreased discovery could be disastrous, resulting in significantly more deaths caused by infectious disease. An alternative approach is needed.

Scientists have discovered a way to utilize CRISPR-Cas9, a system that allows direct modifications to an organism’s genome, to cut genes coding for antibiotic resistance in pathogens 1. Used in conjunction with antibiotics, CRISPR could defeat resistant pathogens; however, effective in vivo delivery of the CRISPR system to pathogens has yet to be developed.

Northwestern iGEM has designed CRISPR Capsules to fill this gap. CRISPR Capsules would take advantage of outer membrane vesicles (OMVs), a natural bacterial delivery system for proteins and nucleic acids 2. This dual capability is crucial as the CRISPR system consists of Cas9, a protein capable of cutting DNA, and guide RNA (gRNA) which directs Cas9 to cut specific DNA sites. Two crucial steps toward realizing the vision of delivering CRISPR via OMV are:

Why Use Outer Membrane Vesicles? 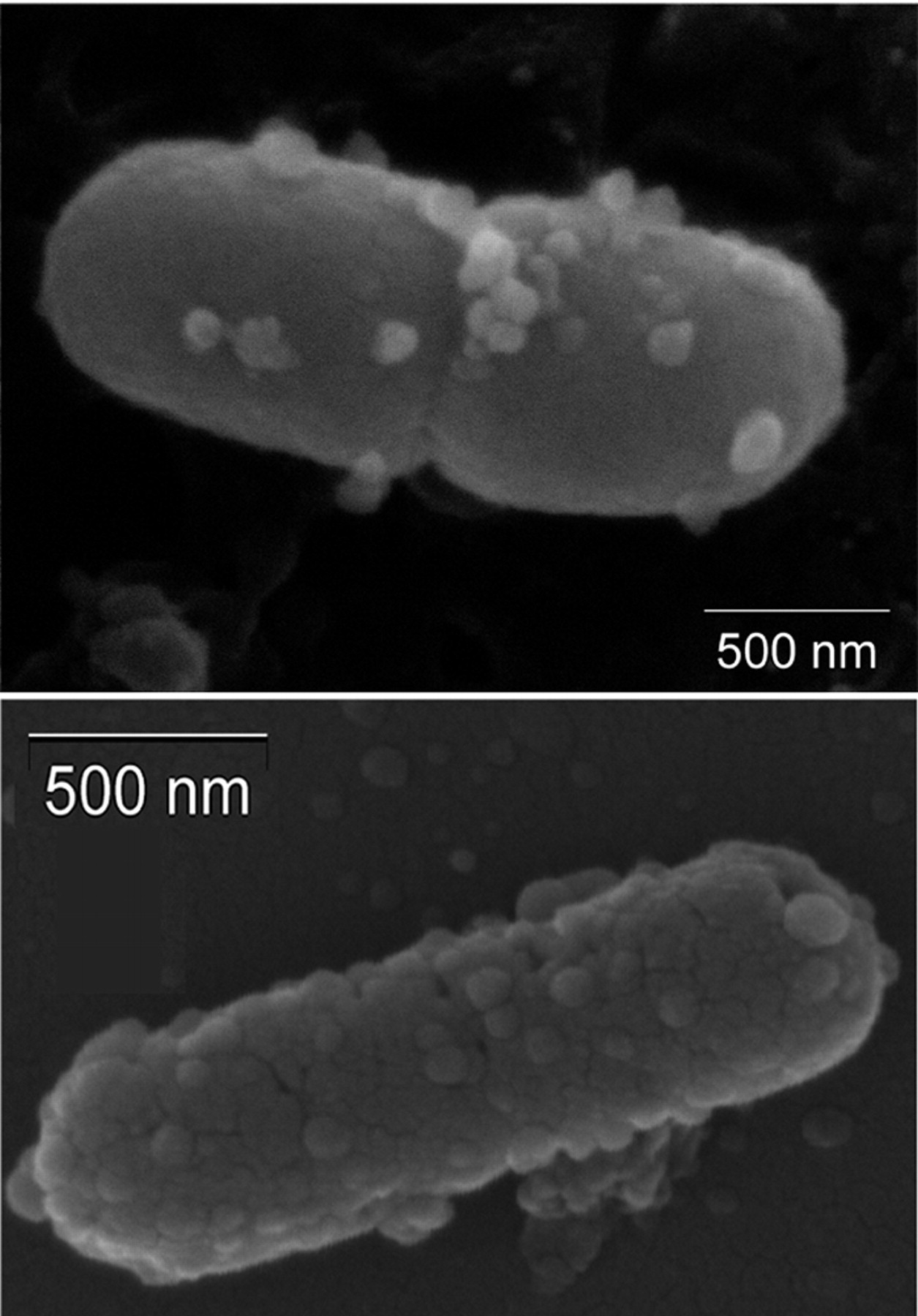 Gram-negative bacteria such as E. coli naturally release outer membrane vesicles (OMVs) when placed under environmental stress. These vesicles range between 20 and 250 nm in diameter 2. A unique characteristic of OMV secretion is the ability of a bacterium to deliver a high concentration of proteins to a remote site 2. NU iGEM has explored this property of Gram-negative bacteria to deliver Cas9 and gRNA to pathogens, potentially far from the site of insertion into the body. OMVs can then be endocytosed by target pathogens 3.

Other in vivo gene and protein delivery methods have been extensively studied in an effort to characterize a safe, clinical application for resensitizing antibiotic-resistant pathogens. Each of these methods suffers from drawbacks when compared with OMV delivery. Bacteriophages have been studied as a potential vehicle for CRISPR to knock out antibiotic resistance genes. A limitation of this delivery method is the large size of bacteriophages; infected tissues are not permeable to most phages 5. Additionally, hydrodynamic injection has been investigated as a potential method to deliver plasmid DNA to animals for applications in gene therapy. The technique is essentially a rapid, intravascular injection of a large volume of DNA solution into a blood vessel or skeletal muscle tissue. Though this method does not involve viral gene delivery, the high volume of fluid causes temporary cardiac dysfunction, increased blood pressure across the liver, and significant expansion of the liver when tested on rats 6.

Many potential avenues of in vivo CRISPR-Cas9 delivery have been explored, though these methods also carry disadvantages. Lipid-mediated transfection, the delivery of DNA or proteins encapsulated in engineered liposomes, can be taken up by a target mammalian cell via endocytosis 7. This method was shown to work well for delivering functional Cas9-gRNA complexes into mammalian cells, but has never been shown to work for bacteria 8. In comparison, OMVs have been well-documented as transporting molecules to bacteria.

Considering these limitations in current delivery methods, we have explored a novel method of Cas9 delivery to pathogens by utilizing the properties of naturally-occurring bacterial outer membrane vesicles (OMVs).

Programming E. Coli to Translocate Cas9 to the Periplasm

Gram-negative bacteria have an inner and outer membrane; the “periplasm” refers to the region between these membranes. OMVs secreted from bacteria contain the periplasmic substance, as well as periplasmic nucleic acids, proteins, and small molecules 9. Proteins produced in the cytoplasm must be translocated to the periplasm in order to be delivered via OMV; as such, our primary goal this summer was to translocated Cas9 to the periplasm.

Figure 2: Translocation of Cas9 to the periplasm for eventual encapsulation into an OMV.

To translocate a protein as large as Cas9, we tested four distinct mechanisms of translocation. We assembled three varieties of signal sequences and a protein fusion with Cas9. For our experiments, we chose to use the smallest type of Cas9 we could find: Staphylococcus aureus Cas9 (saCas9), which is approximately 114 kDa 10. (SaCas9 is still a massive protein relative to GFP, which is approximately 27 kDa.) We speculated that a smaller Cas9 makes for easier encapsulation into OMVs. SaCas9 also recognizes longer PAM sequences than other Cas9 proteins (such as spCas9), which makes it a useful addition to the Registry. SaCas9 has been shown to have fewer off-target effects than SpCas9 10.

A signaling sequence codes for a mechanism that mediates protein translocation to the periplasm of gram-negative bacteria. Three methods we have tested are the twin arginine translocation (Tat) pathway, general secretory (Sec) pathway, and Tat/Sec-promiscuous localization (which can utilize either pathway). These three methods were tested to determine the most optimal pathway to transport Cas9 to the periplasm of E. coli.

The twin-arginine translocation (Tat) pathway translocates fully-folded proteins through the cytoplasmic membrane of gram-negative bacteria. Tat depends on a complex of three proteins: TatA, TatB, and TatC, as well as a ~20-base-pair signal peptide sequence (TorA, naturally optimized for E. coli). The mechanism of Tat translocation is not yet fully understood. Proton motive forces drive the protein towards a membrane channel that is predominantly made up of TatA 11. A concern with this pathway is speculation that Tat has a relatively small size limitation for the maximum folded protein size that can be translocated. The largest protein translocated via Tat has been reported to be 142 kDa 12. 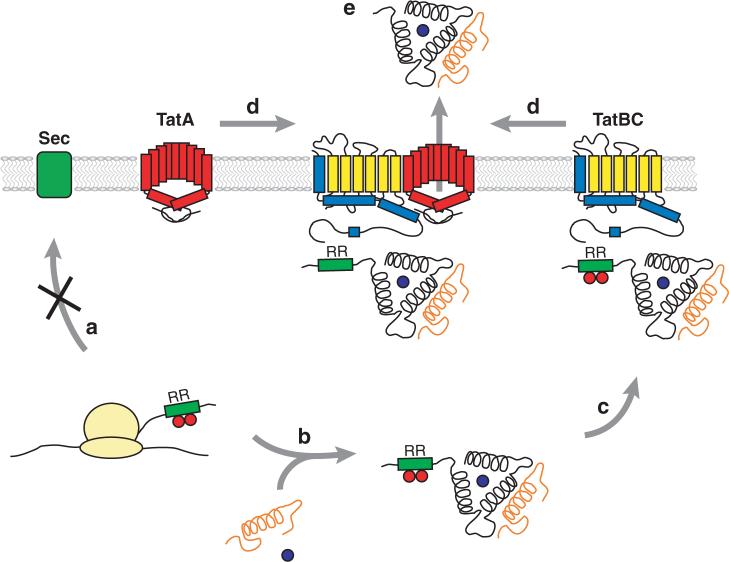 Figure 3: Model of Tat pathway. A fully-folded protein binds to the twin arginine signal sequence (“RR”), and is directed to the TatABC protein complex for exit from the cytosol to the periplasm 11.

The general secretory (Sec) pathway cotranslationally translocates unfolded proteins through the cytoplasmic membrane of gram-negative bacteria. The protein to be exported is directly translocated from the ribosome when coupled with the ~20-base-pair signal peptide DsbA (naturally optimized for E. coli), which allows the Sec protein complex to recognize the protein of interest. The protein SecB is a chaperone that guides the protein to the signal translocase situated on the cytoplasmic membrane (SecYEG “channel-like” protein), and maintains the protein-of-interest in an unfolded state 13. It is believed that the driving force of Sec translocation is the ATPase from the SecA component of the Sec system. A potential drawback in this pathway is the possibility of incorrect Cas9 refolding once the protein has reached the periplasm.

The Tat/Sec promiscuous signal sequence simultaneously utilizes the Tat and Sec mechanisms previously discussed. Select signal peptides can direct proteins to the periplasm via either the Tat or Sec systems 11.

Protein fusions are a group of proteins directly linked to each other with peptide bonds, forming a larger protein complex. A protein fusion we have explored is the ice nucleation protein (INP) with saCas9. INP is a membrane protein that will form a peptide bond (“protein decoration”) with saCas9 14,15. When the cell secretes an OMV with the INP decoration, we proposed that Cas9 would be attached to the OMV’s membrane.

A hypervesicular strain of E. coli, JC8031, was provided to NU iGEM by the DeLisa lab at Cornell with permission from Dr. Roland Lloubes, who originally designed the strain 9. Elevated vesiculation in JC8031 is attributed to the deletion of the lipoprotein-coding nIpI gene in E. coli. OMVs secreted from this strain are reported to be 20–200 nm in diameter.

The next step will involve using electroporation to insert gRNA into OMVs. It has previously been shown that RNA can be electroporated into OMVs 16.

More modifications to E. coli have been investigated, particularly related to the septic shock-inducing effects of lipopolysaccharides (LPS) on humans 17. It has been shown that E. coli can be genetically modified such that LPS no longer lines the outer membrane 18. Removal of LPS from the outer membrane of E. coli does not elicit an immune response from in human cells 18.

Once all theoretical requirements for use of OMVs in mammalian systems have been met, in vivo experiments will need to be performed to test if OMV can successfully transport Cas9 and gRNA, and if Cas9 can perform gene editing after the delivery.

Finally, a macro-scale delivery method will need to be investigated. As the intestines are a likely target for CRISPR Capsules, this method will probably take the form of an oral capsule or a suppository. CRISPR Capsules could also serve as a treatment for skin infections, and in this case, would need to be suspended in a gel or cream. Liposomes are an established form of drug delivery, so we speculate that OMVs can eventually also become a renowned drug delivery system 19.

Beyond Antibiotics; Beyond CRISPR Capsules

In nature, OMVs target a wide variety of cell types including eukaryotic hosts, meaning that CRISPR Capsules could be used wherever there is a need to bring Cas9 into a cell 20. They might be used to modify gut flora, or even to perform gene therapy on intestinal cells. One can imagine using CRISPR Capsules to prevent cancer by converting oncogenes back to proto-oncogenes, and restoring functionality to tumor suppressor genes.

In addition, proteins other than Cas9 could be delivered via OMVs. They might be particularly useful in cases where human body cells do not readily take up a pharmaceutical in their environment. CRISPR Capsules could even be extended to non-medical applications in exogenous whole-protein delivery, such as water treatment, food preservation, or maintaining a sterile environment aboard spacecraft. These examples should not be considered boundaries. CRISPR Capsules and vesicular protein delivery hold broad potential for technological advances in the near future.