Antibiotic discovery may continue to wane in the coming decades because antibiotics aimed for the easiest bacterial targets have already been developed. Considering that bacteria are unlikely to similarly slow in the development of resistance, decreased discovery could be disastrous, resulting in significantly more deaths caused by infectious disease.

NU iGEM 2016 took a significant stride toward an alternative solution to this crisis; however, our experiences this summer testify to the time-consuming nature of genetic research. In order to provide scientists enough time to develop novel antibiotics, physicians and patients must use existing antibiotics appropriately. With that in mind, our Human Practices work focused on educating the public on the proper use of antibiotics and encouraging young students to cultivate an interest in synthetic biology.

Initially unsure of the best way to address the issue of antibiotic resistance via outreach, we performed extensive research on the subject. The publications we read mentioned many causes for the rapid pace of resistance development, including the overprescription of antibiotics in developed countries. We concluded that we needed the perspectives of clinicians if we were to understand why doctors overprescribe antibiotics, and how a group of undergraduates could hope to persuade doctors to prescribe antibiotics more appropriately.

As such, we interviewed Drs. Persell, Postelnick, and Scheetz, all of whom work on the research and clinical side of medicine through the Feinberg School of Medicine and Northwestern Medicine. These interviews revealed a major reason doctors prescribe unneeded antibiotics: patient demand. Instead of persuading doctors to change their behavior, we decided to educate the public on appropriate use and prescription of antibiotics.

In addition, the three physicians agreed that CRISPR would be more effective if targeted to knock out resistance genes for existing antibiotics rather than serving as a novel antibiotic by targeting other bacterial genes. Existing antibiotic resistance proteins, such as beta-lactamase and fluoroquinolones, are safer targets and result from well-characterized sequences. This advice incorporated well into the design of CRISPR Capsules—a realistic future aim would be to introduce Cas9 encapsulated in OMVs to a cell already containing a guide RNA for a selection marker such as ampicillin. If Cas9 enters the cell and cuts the resistance gene, it will not grow on that antibiotic. This would be a proof of concept for targeting antibiotic resistance with CRISPR, and also a simple test of successful OMV delivery.

One interview question asked the clinicians to identify what they considered the most worrying antibiotic-resistant infections. Their answers included hospital skin infections like Pseudomonas aeruginosa and Acinetobacter baumannii. This also informed our project design, because topical infections would be safe early applications of a bacterially-derived product to evaluate immune response to the therapy.

Having compiled a wealth of information via research and interviews, we decided to use it to produce a pamphlet which could be distributed at events or placed in waiting rooms. The pamphlet illuminates the problem of antibiotic resistance, persuasively coercing the reader to use antibiotics correctly. Furthermore, one section dissuades the consumption of meat produced from animals raised with prophylactic antibiotics, while another explains why the prescription of antibiotics to prevent infections after wisdom tooth surgery is inappropriate. Future iGEM teams and other organizations are encouraged to use this pamphlet however they see fit. It can be downloaded here.

Instructions for printing and cutting: 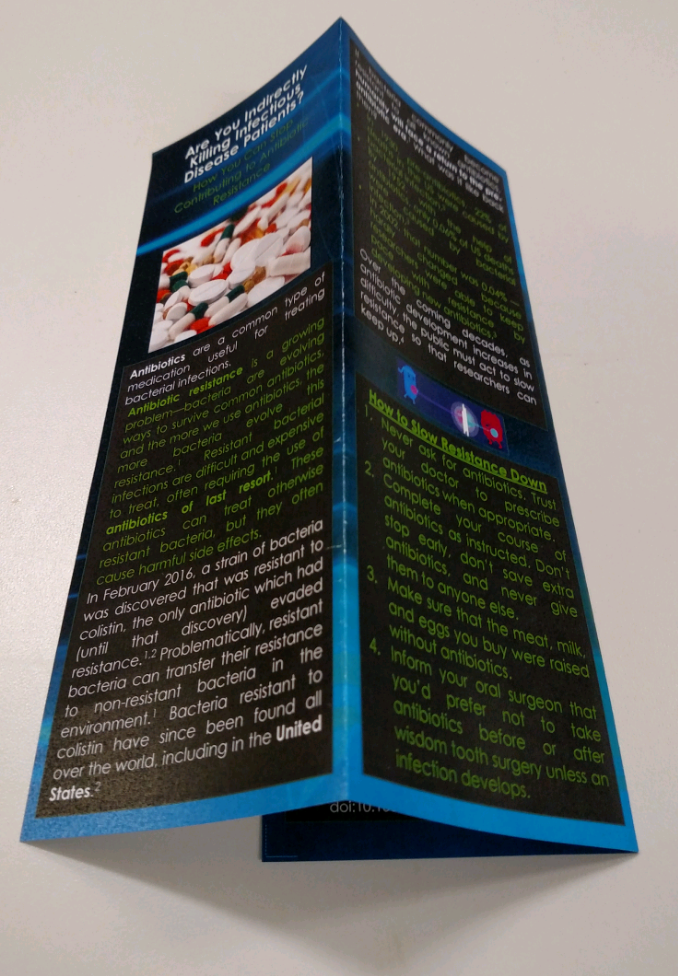 At the summer’s start, our team was largely inexperienced with public outreach. We applied for a Building with Biology kit to help us develop the skills we were lacking. Building with Biology is a program funded by the NSF whose stated purpose is “to build the capacity of the field to use public engagement with science (PES) activities to extend STEM learning about science, technology, and societal implications through public and scientist dialogue about synthetic biology.” The kit contained instructions and materials for a variety of activities. Of these, we decided to run a “See DNA” event and hold a “Should We Engineer the Mosquito?” forum.

Our “See DNA” event engaged a group of approximately 25 girls, aged 12-14, participating in a summer program held by the Society of Women Engineers (SWE). To start, we delivered a presentation about a variety of subjects related to genetics. In the remaining time, we guided the students through the isolation of visibly clumped wheat germ DNA. The most interested participants asked many unexpected questions throughout the activity, such as what we thought about GMO food and whether they could safely eat the wheat germ DNA. 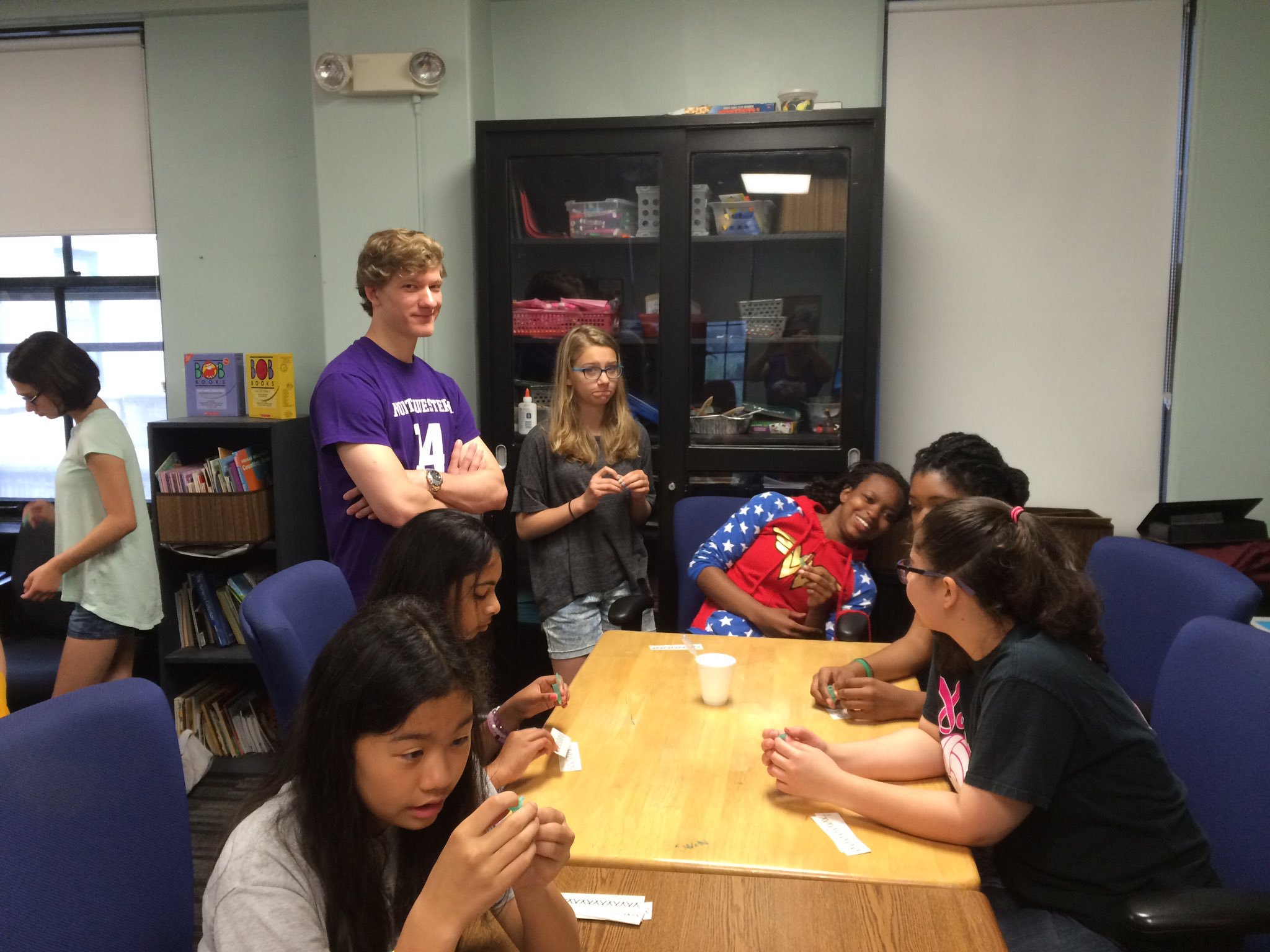 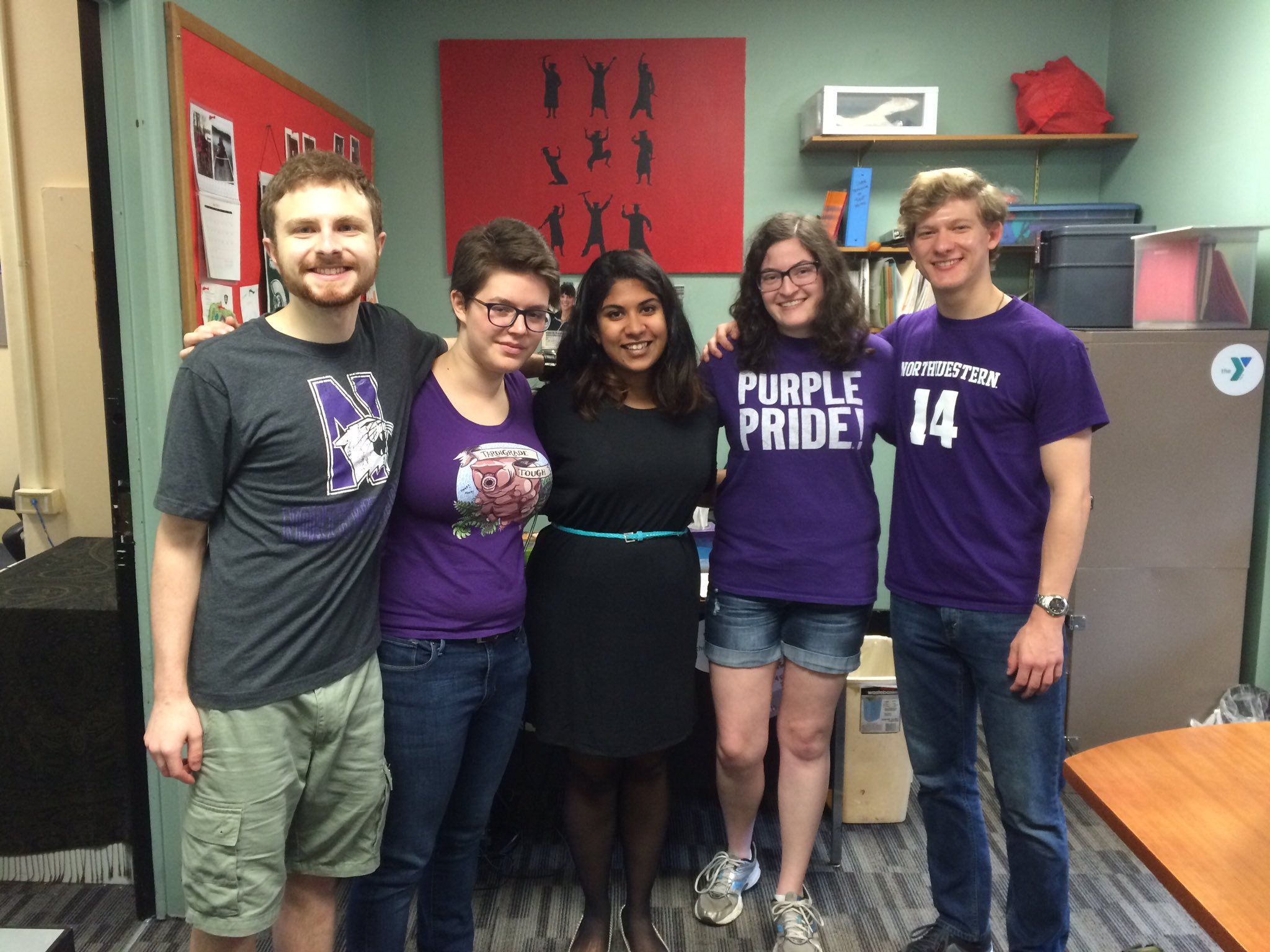 Sam, Jordan, Sara, and Paul at the SWE outreach event.

Everyone displayed visible excitement when we used phrases such as “gamma radiation” and “you might die if you eat enough protease” in our answers. We concluded that in order to keep the public’s attention, it is a good idea to pause for questions frequently and to highlight the most exciting parts of the topic being presented. Overall, we provided the participants with a chance to learn about an engineering field they hadn’t encountered during their program, as well as an opportunity to experience molecular biology firsthand.

Our “Should We Engineer the Mosquito?” forum was presented to a group of eight high school students taking an Introduction to Genetics course at Northwestern’s Center for Talent Development (CTD). First, we played a video explaining gene drives, CRISPR, and how CRISPR can be used to make an effective gene drive. We then asked the students to split into two groups, and they clearly split into a quiet group of friends and a boisterous group of friends. Both groups excitedly worked through the material, clearly demonstrating that they understood the video and found the subject matter intriguing. We asked them to fill out the Building with Biology standard exit survey, and while reviewing their submissions, we learned that the students enjoyed having a chance to debate the ethics of genetic engineering. Until our forum, their class had focused entirely on technical material. We also concluded that the Building with Biology standard survey did not exactly fit our needs, and resolved to develop our own survey going forward.

Within the week, we gave the same class a tour of two labs belonging to our advisors. Kelly Schwarz, our team’s graduate student advisor, exhibited projects investigating exosomes in Josh Leonard’s lab. She then led a “painting” activity employing fluorescent bacteria of various colors. Ben Des Soye, a grad student in Michael Jewett’s lab, talked to the students about research in cell-free protein synthesis. The students asked insightful questions on both tours, such as “How do you avoid contaminating mammalian cells?” and “Why would you want to make proteins outside of cells rather than inside?” In addition to answering these questions, we explained the concept of CRISPR Capsules. 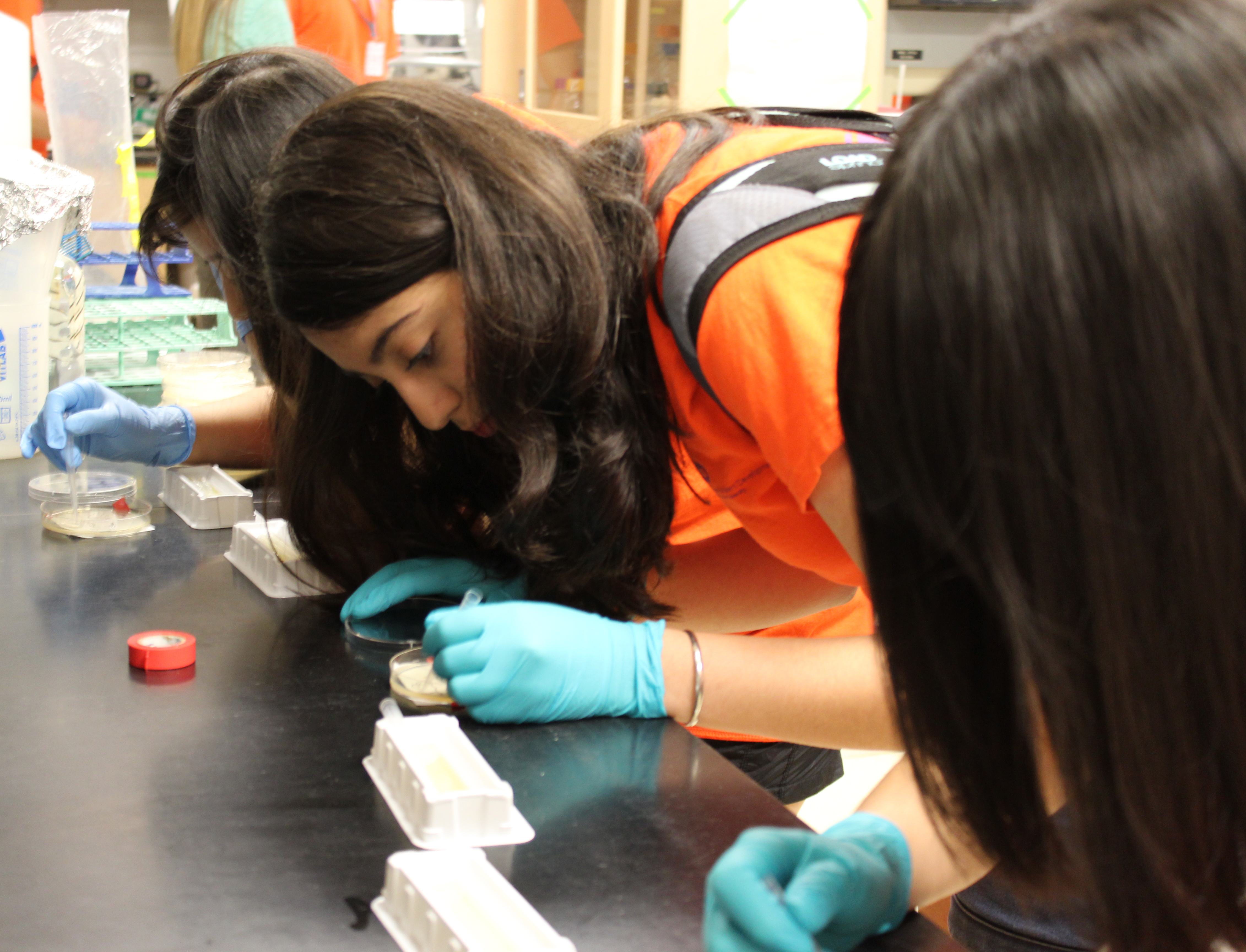 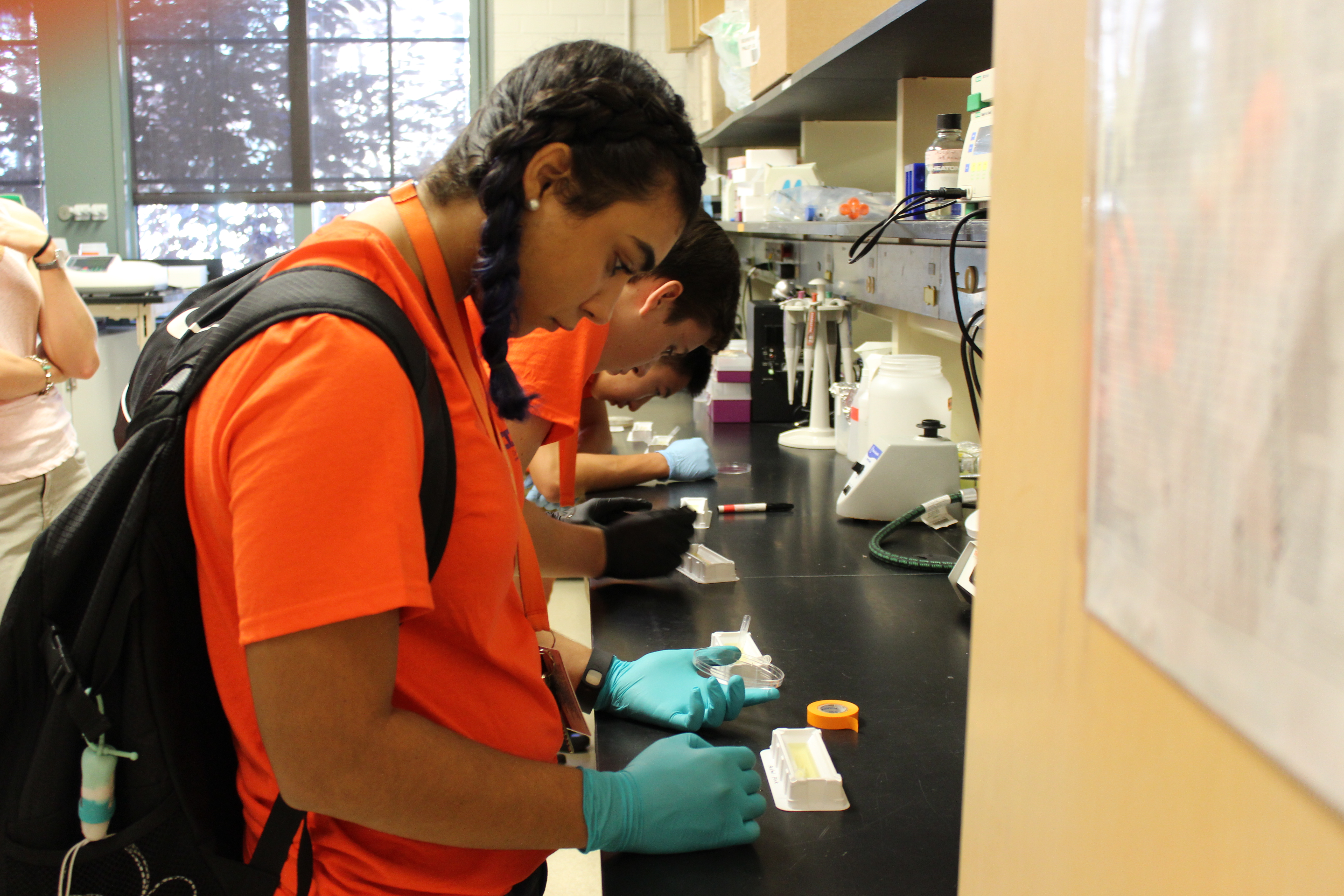 The CTD students painting with bacteria in the Leonard Lab.

At the summer’s end, we were given the opportunity to teach a high school biotechnology class for a day at the Perspectives Charter School campus in Auburn Gresham, a high-risk neighborhood in the south side of Chicago. Teach for America member Emma Nechamkin helped us prepare our presentation material, which took almost a full month to plan. Emma emphasized that her students were a “challenging group.” Aiming to provide an engaging lecture, we filled the slides of our presentation with images and GIFs.

We brought with us two bags of GMO-free fruit juice pouches and conventional honeycrisp apples from Whole Foods. The class had 25 students ranging between the ages of thirteen and nineteen. None of them had any prior exposure to research science. We handed out juice pouches. Initially, we discussed GMO foods, using the “non-GMO” juice pouches as a segway for our discussion on “What is genetic engineering?”

We explained the growing threat of antibiotic-resistant pathogens, CRISPR-Cas9, our iGEM project, and grant proposals. Students asked questions such as “If I cut off a lion’s tail, can I use CRISPR to give myself a tail?” and “If I were to modify the DNA of an animal, would that animal change completely?” At the conclusion of our presentation, we asked the students to write grant proposal outlines explaining how they would use CRISPR to solve a problem. We encouraged crazy ideas and walked around the classroom to interact with the students. One group of students said they’d use CRISPR to “give a person a twin if they wanted one.” Another group said they would “change other people’s mindset” and “end racism.” After the students completed their grants, we gave everyone apples, explaining that any of them could become scientists one day and that scientists normally have months to generate ideas and write their grant proposals.

After we returned to Evanston, we emailed Emma a new survey that would provide useful information for future iGEM teams planning presentations for high school students. The survey instructions made clear its voluntary and anonymous nature. Emma administered the survey and sent us the results promptly. Here’s what we learned: 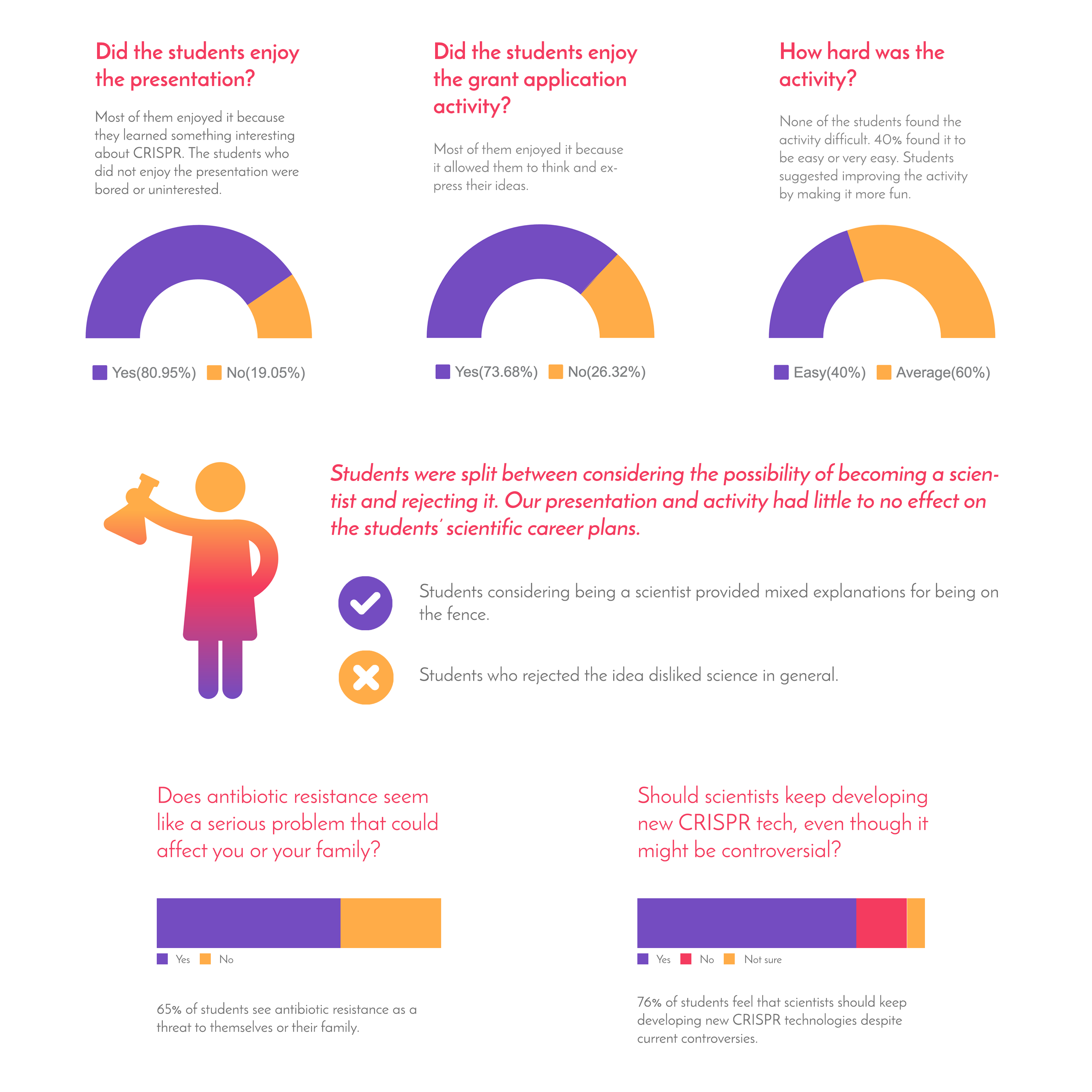