The second “black box” in the model represents the process of photosynthesis occurring in photosystems within the attached thylakoid membranes.

Photosynthetic electron transfer’s relative proton to electron stoichiometries (H+/e- ratios) was obtained from living tobacco plant leaves under steady-state illumination. Electron transfer fluxes as well as turnover rates of linear electron transfer through the cytochrome (cyt) b6f complex were estimated (Colette A. Sacksteder, 2000). In Figure 3, fluorescence yields and electron flux of photosystem II is plotted. Yields from fluorescence during saturation pulses, F'M (closed squares) and yields from fluorescence in the steady-state, Fs > (open circles), were obtained at varying light intensities. Photosystem II and associated light-harvesting complexes’ FV/F'M or ΦII, open diamonds) quantum yield and an estimate of the electron flux of photosystem II i⋅ΦII) were calculated, as described in the above mentioned report. 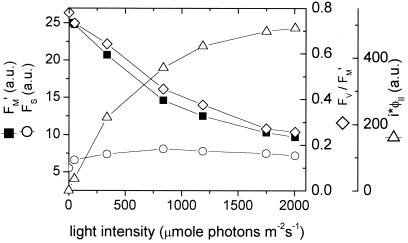 
The estimate of electron flux i⋅ΦII) (open diamonds) is of importance in describing what happens in the second “black box” of this simulation model. A line of best fit was retrieved from the information in Figure 3 and transformed to a polynomial function plotted in Figure 3, described by the following equation: 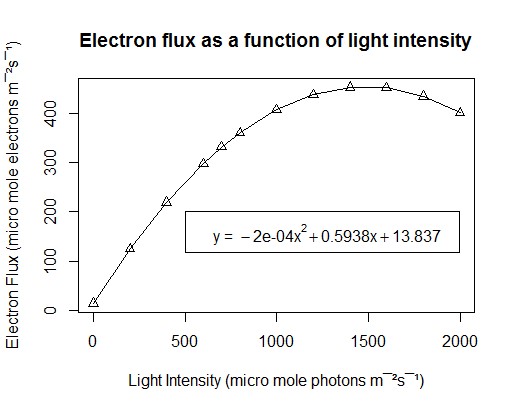 Figure 4: Electron flux of photosystem II as a function of light intensity

This was used to calculate the quantity of photosystems II possibly located on the surface area of the graphene electrode.


As seen in the above Figure 5, light intensity −2s−1) is used as input for the first black box, where after equation [1] describes processes happening inside the box and gives an output of electron flux −2.s−1).

Fick’s diffusion laws are used to describe the movement of electrons from the photosystems to the graphene electrode. Fick’s first law is given as:

Equation [2] can be rearranged into Equation [3]:


In the above Figure 6, electron flux −2.s−1) is used as input for the second black box, where after equation [3] and [4] describe the diffusion of electrons from the thylakoid membranes to the graphene electrode. An output of a number of electrons per second is obtained.

Combining all of the “black boxes” results in the model logic as illustrated in Figure 7. Changeable parameters include: light intensity −2.s−1), casing material (Perspex or glass), electrode size and whether or not to select thylakoid attachment by making use of aptamers. The main measurable is current (A). 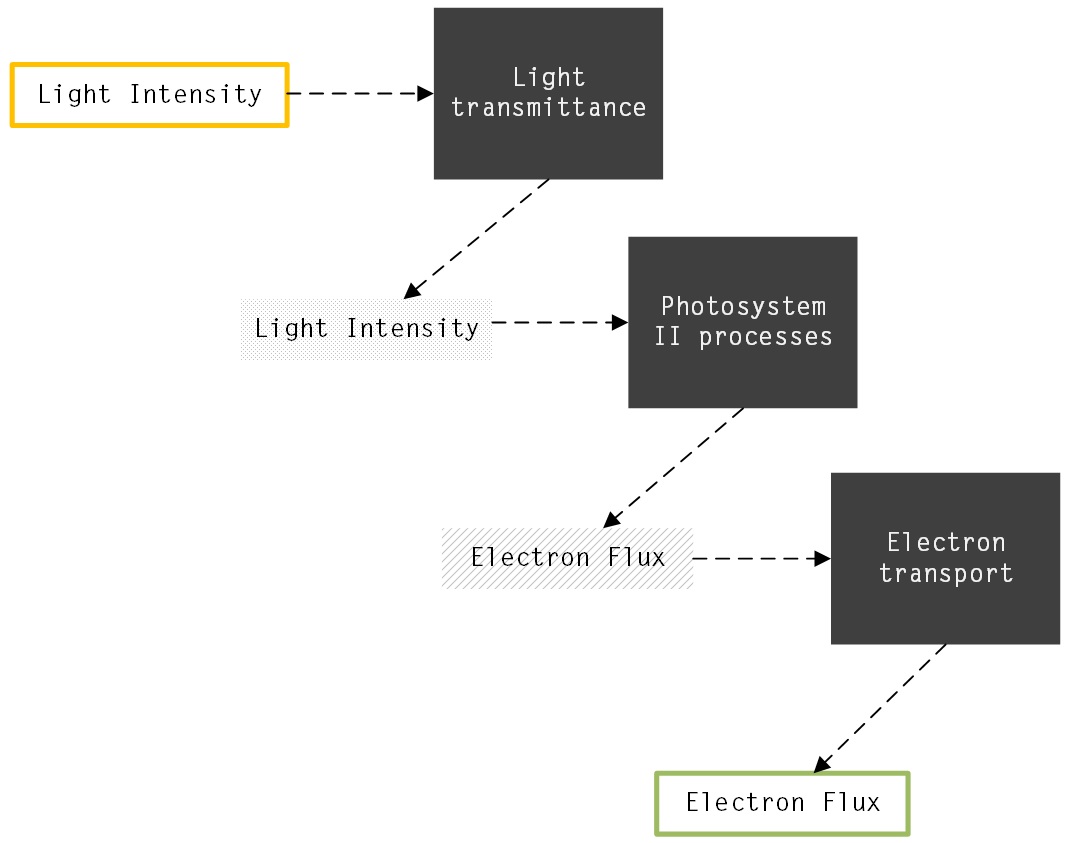 Figure 7: The combination of "black boxes" used in the model

Buttons and sliders are added to allow the user to change specific parameters. Graphs of both the current (A) measured and the influence of light intensity on the electron flux produced are drawn dynamically. A 3D illustration of the PBEC is also presented which is animated as the user changes parameters.

In order to illustrate the results of the simulation model, 3D graphs were compiled of the output obtained from each “black box”. Following is a graph that displays the light intensity obtained after using Perspex and glass of both 0.2 and 0.5 mm thick at various input light intensities. As illustrated, the highest yield is obtained by using 0.2 mm thick glass at a light intensity of −2.s−1; 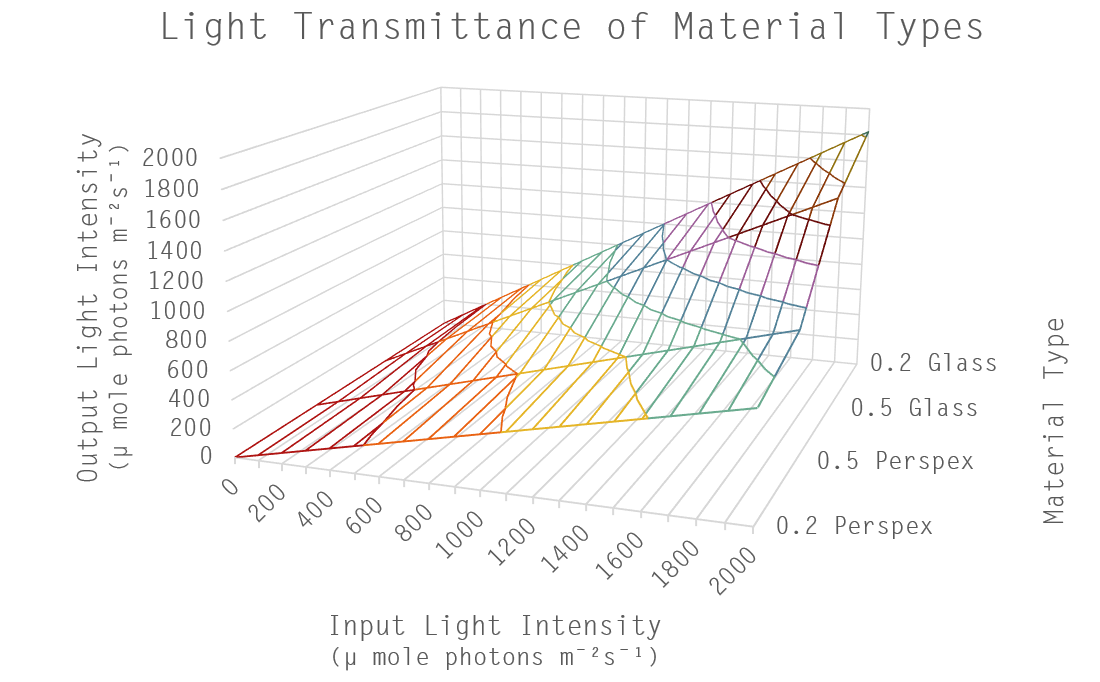 
The process of photosynthesis occurring in the thylakoid membranes is represented by the second “black box”. Following is a graph of the obtained electron flux as a result of both the electrode size (surface area) and light intensity. The highest yield is observed in the region using an electrode surface area of 2 and light intensity of −2.s−1; . 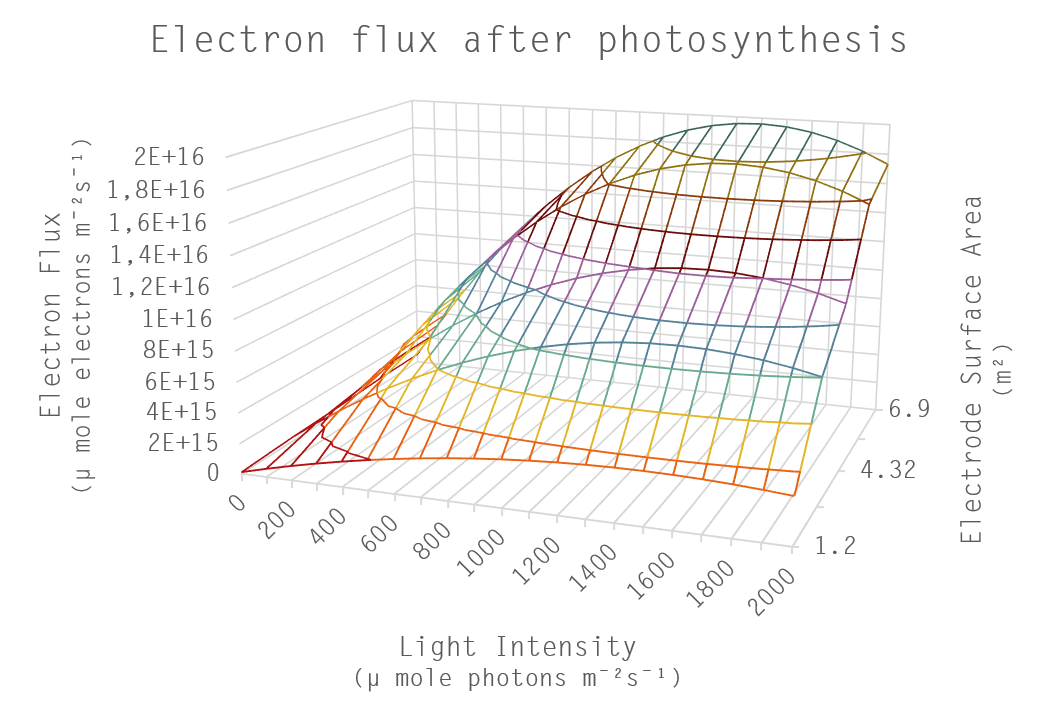 Figure 9: Model results of electron flux as a result of electrode size and light intensity 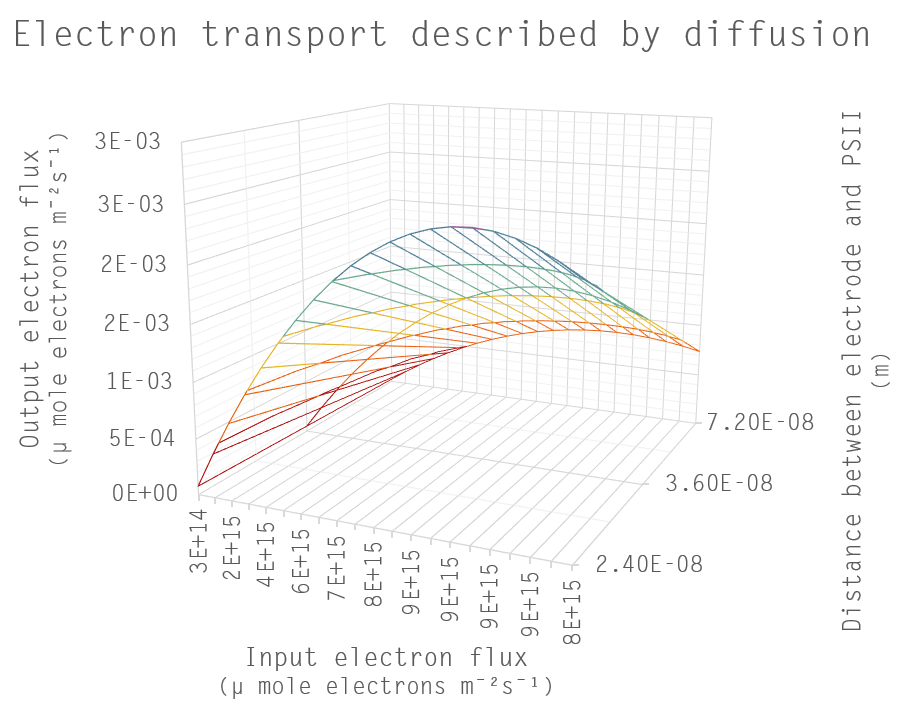 
After multiple runs, the highest yield resulting in a current of −21A was obtained with the following parameter settings: Light intensity of −2.s−1; using glass as casing material; keeping the electrode surface area at 2; making use of aptamers to attach thylakoids to the electrode.