Currently, most of the devices are introduced into L. lactis by plasmids. Various vectors containing constitutive or inductive promoters have been developed, such as pMG36e, pNZ8148. However, the devices introduced by plasmids had two disadvantages. First, most plasmids have selection markers (genes) for antibiotic resistance, which is forbidden to be used in food or digestive tract of human and animals directly. Second, the plasmids were unstable in cytoplasm in the absence of selection pressure. 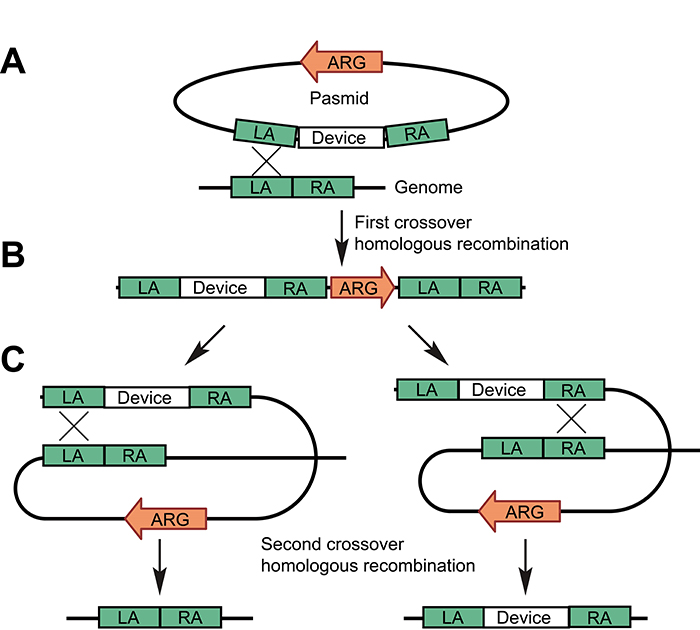 To get device knocked-in recombinant L. lactis without antibiotic resistant genes and make this process easy and highly efficient, we try to establish a visual selection system based on the insoluble blue compounds generated by the lacZ gene encoded β-galactosidase catalyzed X-gal (also abbreviated BCIG for 5-bromo-4-chloro-3-indolyl-β-D-galactopyranoside) hydrolysis. To build this system, we chose the His locus as the targeting locus. The His locus is required for the synthesis of histidine, an essential amino acid for L. lactis growth. The recombinant L. lactis strains can only be survived with the supplementation of histidine in the culture but cannot survive without histidine. The His fragment was introduced into a temperature-sensitive conditional replicative shuttle plasmid and we named this plasmid as pHis. Then we placed the lacZ gene driven by the PnisZ promoter into the His locus and we name this plasmid as pBlue. The next step is to integrate the lacZ gene into the genome of NZ9000 to yield the NZ-Blue recombinant strain. The lacZ gene encoded β-galactosidase can hydrolyze the X-gal from colorless substance to insoluble blue compounds, thus NZ-blue strain forms blue colonies on X-gal plate supplemented with nisin. Finally, the device carrying plasmid based on pHis (pDevice) will be introduced to NZ-Blue to replace the lacZ gene and the desired device knocked-in strains will be white when cultured with X-gal and supplemented with nisin. (Figure 1.2) 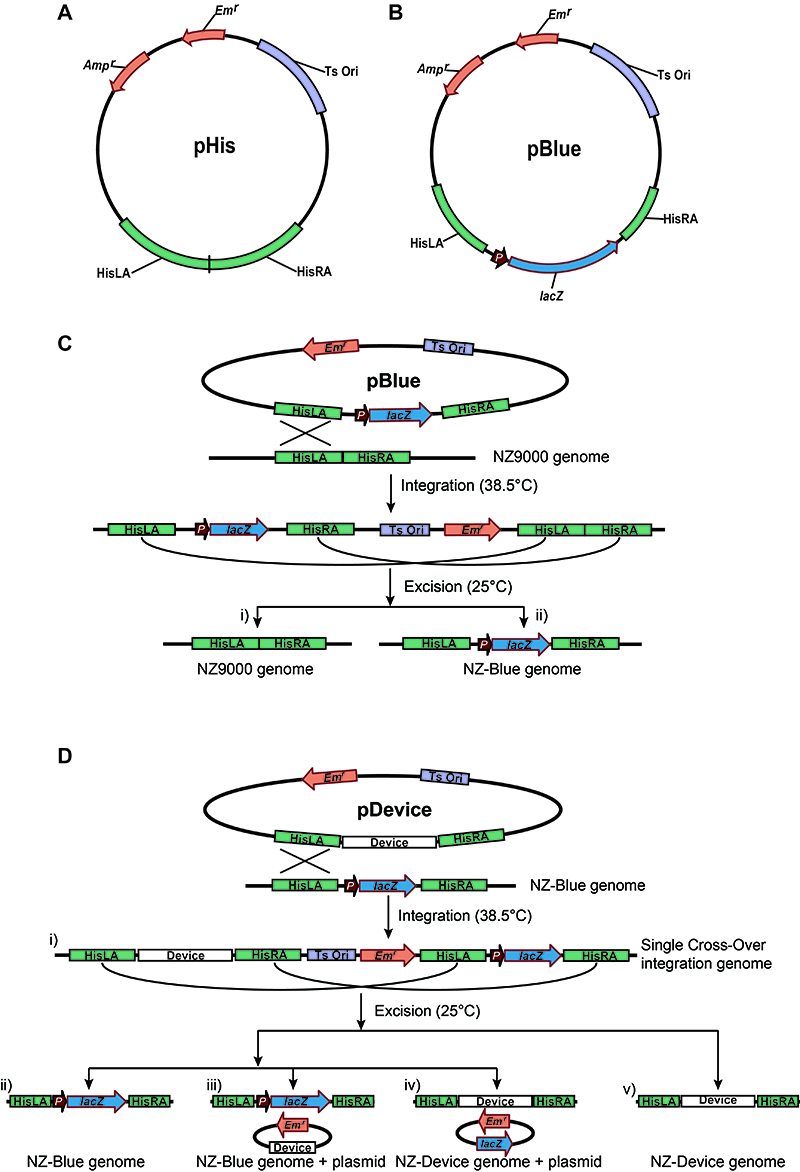 The temperature-sensitive conditional replicative plasmid pHis was used to introduce the ‘PnisZ:: lacZ::Terminator’ fragments into the NZ9000 chromosome of L. lactis. The constructed plasmid pBlue was transformed into NZ9000 by electroporation. To obtain NZ-Blue via homologous sequences (HisLA or HisRA), the NZ9000-pBlue strains were grown in M17GS (M17 broth with 0.55 % (w/v) sucrose and 0.5 % (w/v) glucose) containing erythromycin and incubated at 38.5 °C overnight to integrate the pBlue DNA sequence into the genome of NZ9000 through single cross over. Then, the cultures were diluted in M17GS medium without erythromycin and incubated at 28 °C to promote the double cross over and excision of the antibiotic resistance genes. The subcultures were diluted and plated on M17GS with X-Gal and nisin. Blue colonies obtained by serial plating were screened for erythromycin susceptibility. Colonies in which lacZ gene integration had occurred will appear as blue on X-gal plate supplemented with nisin and erythromycin susceptible. The erythromycin susceptible and blue colonies selected from thousands of colonies were further subject to PCR verification using the extracted genomic DNA as PCR template. DNA sequencing was also used to confirm that no genetic mutations were introduced during the experiment process. After this difficult and tedious task, we successfully got the lacZ integration strain and we name it NZ-Blue. (Figure 1.3) 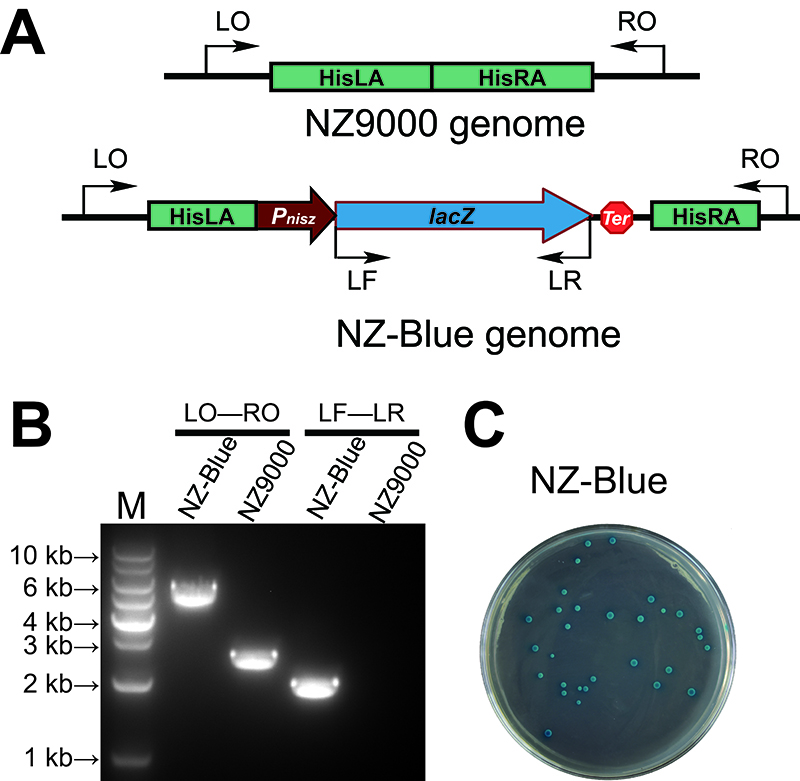 Figure 1.3 Confirmation analysis of the constructed NZ-Blue strain. A). Schematic of genomes of NZ9000 and NZ-Blue. Abbreviations: LO, RO, LF, LR, primers used in Multiple-PCR analysis; HisLA, left arm of His; HisRA, right arm of His; PnisZ, promoter induced by nisin; lacZ, β-galactosidase from Lactobacillus acidophilus; Ter, terminator. B). Multiple-PCR analysis of the NZ-Blue and NZ9000. The primer combinations used in PCR are presented upon the lanes. Genomic DNA used in PCR are presented upon the lines. C). Colony of NZ-Blue. The 1 kb DNA ladder marker is shown to the left (M).

To test the efficiency and capacity of our markerless visual selection system for knocking devices into the genome of L. lactis, 5 devices with different lengths (ranging from 1 kb to 14 kb) were PCR amplified and inserted into the pHis vector. The 5 constructed pDevice plasmids were transformed into NZ-blue strain through electroporation, respectively. To obtain integrant resulting from a single-crossover event via homologous sequences (HisLA or HisRA), the strains containing the plasmids were grown in M17GS containing erythromycin and incubated at 38.5 °C overnight. Then, the cultures were diluted in M17GS medium without antibiotic and incubated at 28 °C to obtain double crossover and excision of the antibiotic resistant genes. The subcultures were diluted and plated on M17GS with X-Gal and nisin. According to our design, the white colonies will be the ones that the devices have been knocked into the genome of NZ-Blue. At this time, we found that among the pool of blue colonies, usually none or one to several white colonies can be easily identified in the plates, indicating the double crossover is really occurred at a very low rate. Multiple-PCR analysis and DNA sequencing confirm the white colonies were the right ones. As expected, 100% of the white colonies are the devices successfully knocked-in strains.

We further summarized the double cross over occurrence rate and the accuracy rate of obtaining these 5 different devices knocked-in strains. As shown in Table 1, though the positive rate is really low in the 10-5 to 10-4 range, the accurate rate is 100%. In conclusion, our makerless visual selection system can effectively integrate devices ranging from 1 kb to 14 kb. Furthermore, the white one is the right one and the accuracy rate is 100%. How easy and wonderful!

Now, the visual selection system including NZ-Blue strain and pHis plasmid were constructed. 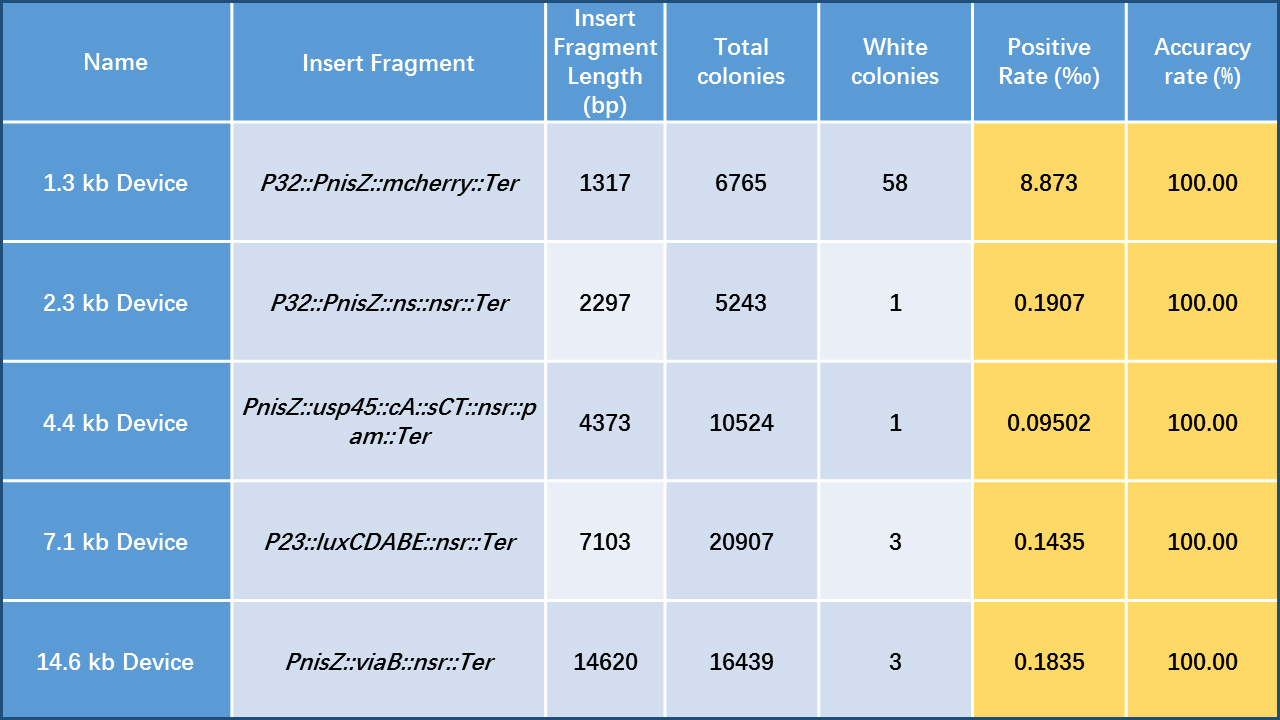 To confirm whether these devices integrated in genome of NZ-Blue are functional, we verified the shortest device, the mCherry device. The mCherry device can give red fluorescence after stimulation, we found that all the 58 white colonies appeared on the X-gal plate gave red fluorescence, demonstrated that all the white colonies are the right ones. (Figure 1.5)

We also verified the longest device, the polysaccharide viaB device, which can alter the surface property of the cell. We found that the NZ-Vi strain exhibited as clumps. Under microscope, a transparent zone around the bacteria can be easily observed, indicating the polysaccharide capsule is successfully expressed. We conclude that the devices knocked in are functional. (Figure 1.6) 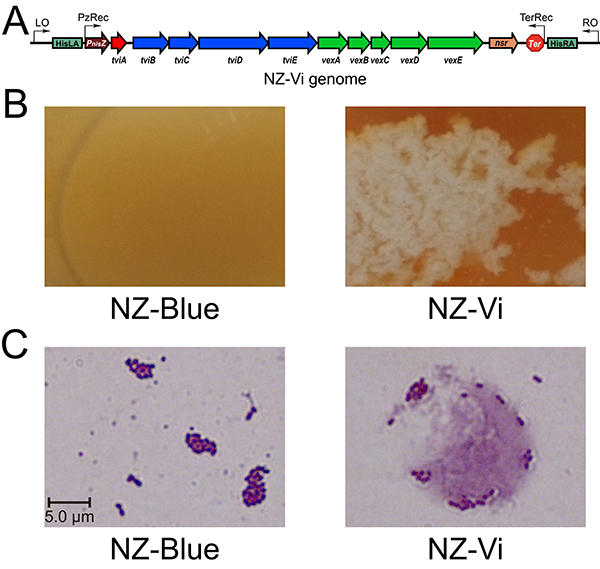