In our iGEM project we managed to create a basic killswitch circuit as shown in Figure 1. In combination with an orthogonal pair for non-natural amino acid (nnAA) incorporation, the transformed strain should only survive in presence of the respective nnAA. The killswitch is based on the interaction of the Colicin E2 DNase domain (miniColicin) with its corresponding immunity protein, whose functional translation is activated upon presence of the nnAA. 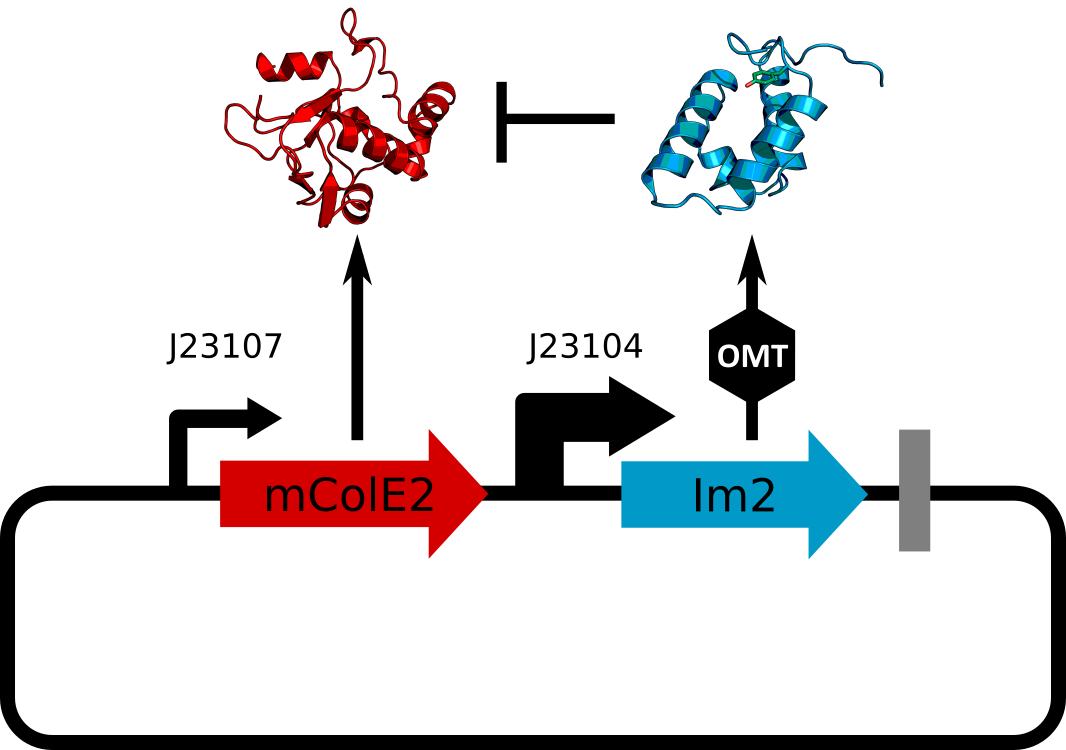 Figure 1: Design of our killswitch.

For our project we chose the nnAA O‑methyl‑l‑tyrosine (OMT). Since this amino acid is relatively expensive in comparison to canonical amino acids, we tried to synthesize OMT ourselves. The synthesis protocol can be found on the dedicated page. The thin layer chromatography of the synthesis delivered promising results since the Rf value of the reaction product is similar to the one corresponding to tyrosine. Further the melting temperature of the product was determined to be 266 °C - 268 °C which is near the literature melting point of OMT (342 °C). For confirmation of the results further analyses are required like nuclear magnetic resonance or mass spectrometry.
The activation of the killswitch operates through translational incorporation of OMT into the immunity protein. For this task the concept of amber supression is used, which requires an orthogonal pair. Therefore we designed an E. coli codon optimized version of the OMT tRNA synthetase (aaRS) from Wang et al. We were able to successfully produce the aaRS under the control of the constitutive Anderson promoter as shown in Figure 3. There is an additional band at ~35 kDa, which is not visible in the control sample. Since the orthogonal pair is not completely assembled yet, optimisation of this part is required. 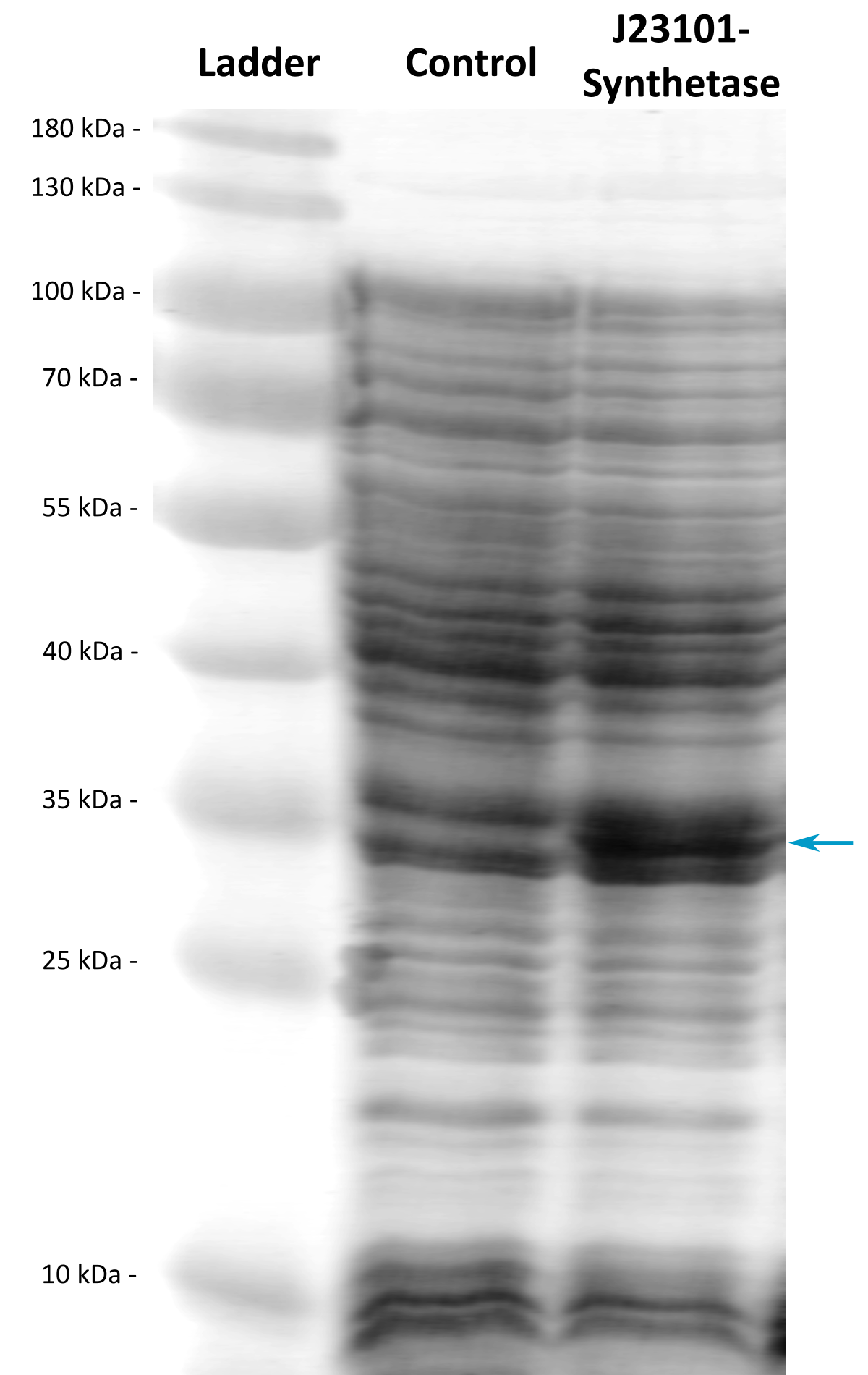 Functionality of the Killswitch 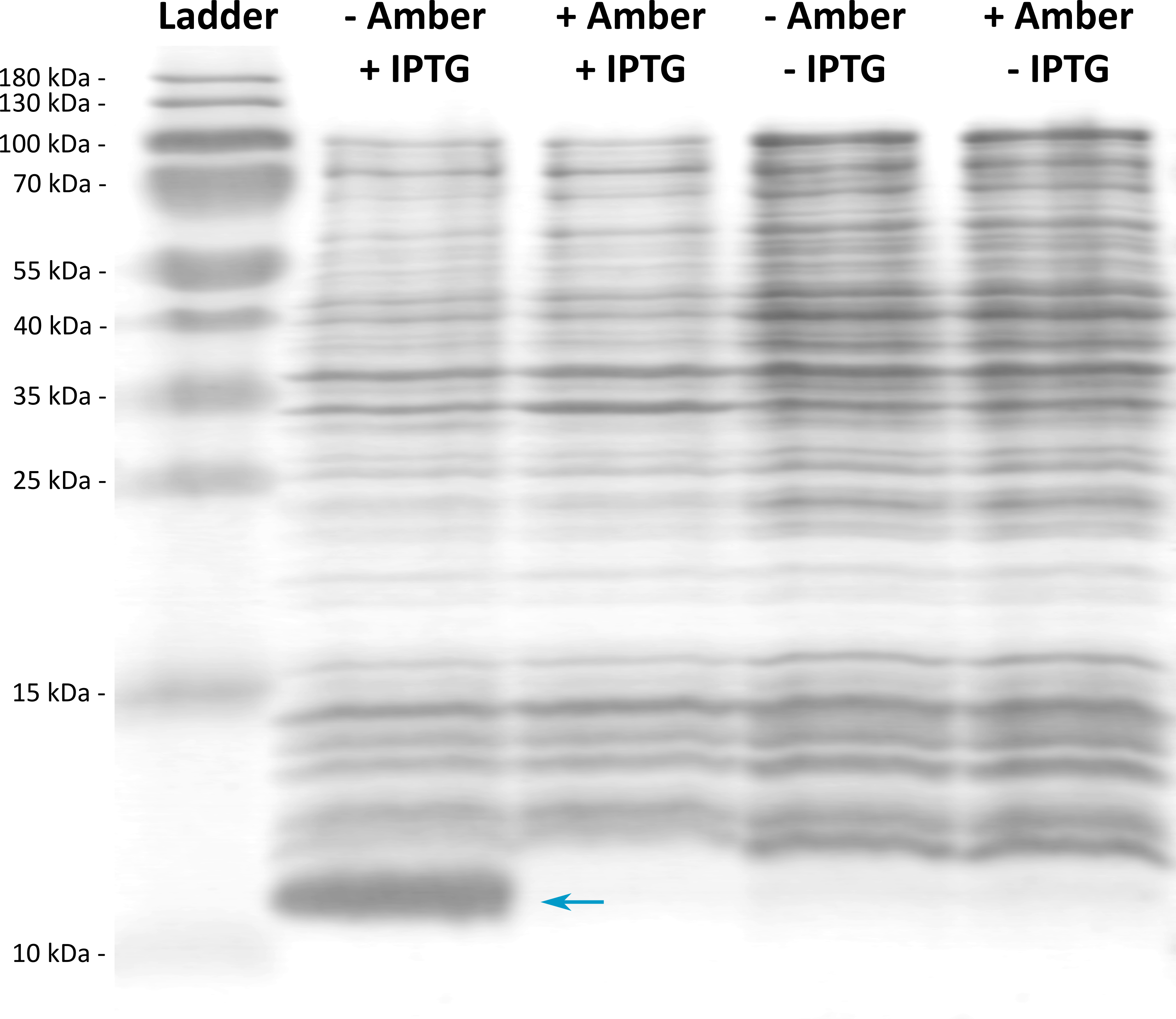 The functionality of miniColicin was confirmed in an in vivo an an in vitro assay: In our in vivo assay we tested the influence of miniColicin on cell growth of E. coli. Upon transformation of E. coli BL21 with miniColicin ((BBa_K1976048)) controlled by the T7 promoter, the amount of obtained colonies after cell plating was significantly lower than the amount after conducting the same experiment with usage of miniColicin ((BBa_K1976049)) with a (C266A) mutation (Figure 3). This indicates that the mentioned mutation inactivates miniColicin and therefore the cytotoxic activity causing a low cell count is negated. The transformation was conducted with the same amount of the respective part on pSB1C3. The miniColicin expression was not induced in this experiment, this indicates that the low basal expression the T7 promoter is known for is sufficient to achieve a significant cytotoxic activity. 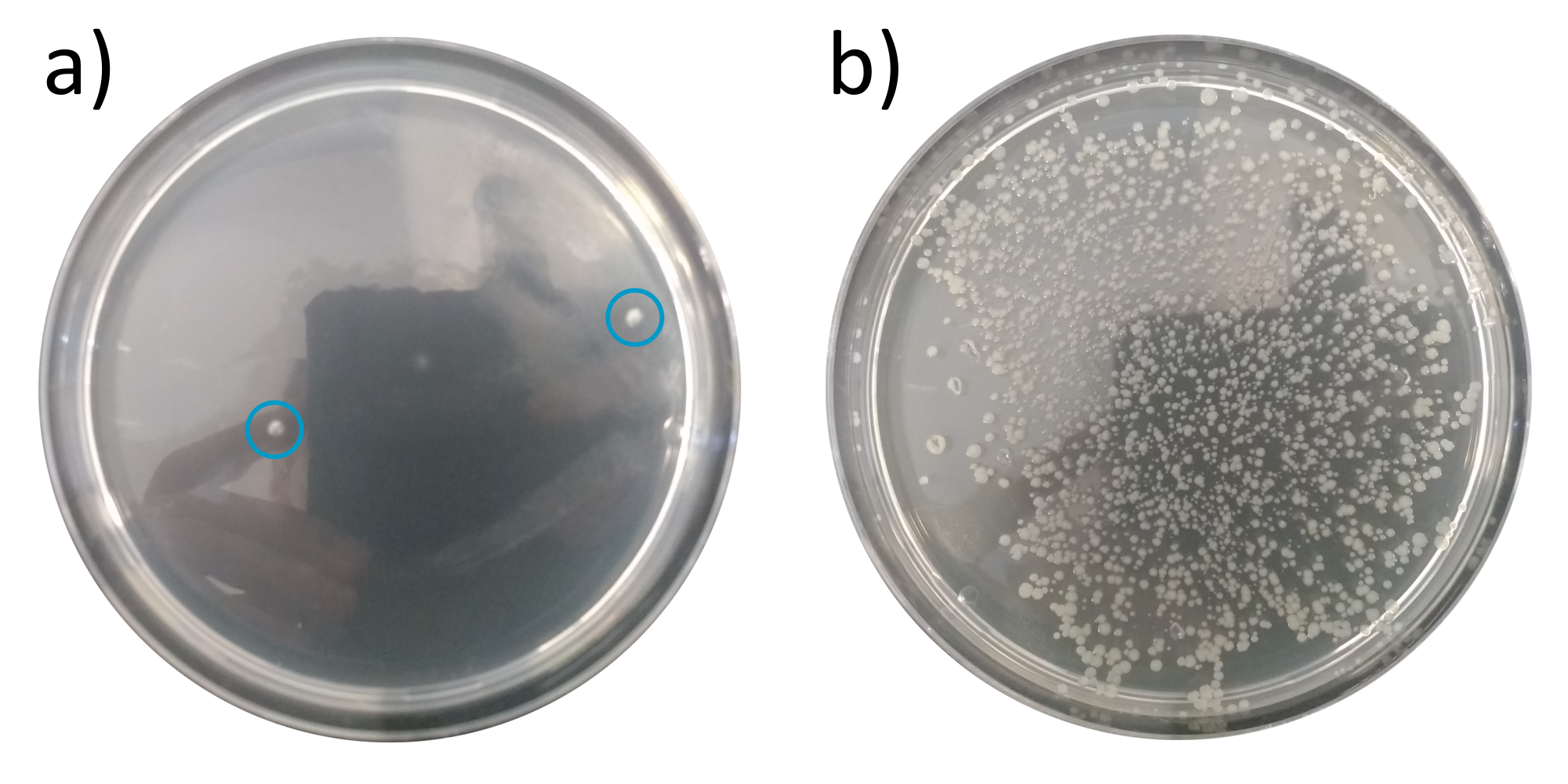 Additionally, the activity was detected via an in vitro assay. At first the expression of miniColicin was confirmed via expression under control of the weak constitutive Anderson promoter BBa_J23104. Both miniColicin variants, BBa_K1976048 and BBa_K1976049, were detected via SDS_PAGE (Figure 5). Secondly, the endonucleic activity was tested via incubation of purified pSB1C3 with E. coli cell lysate containing miniColicin ( BBa_K1976048 or BBa_K1976049 respectively) (Figure 6). The 'smear' at ~0.2 kbp and ~3.0 kbp that is visible after incubation with both miniColicin variants indicate a successful DNA degradation. However, the 'smear' could also be caused by DNA in the cell lysate itself. Further investigations are needed to confirm the activity. 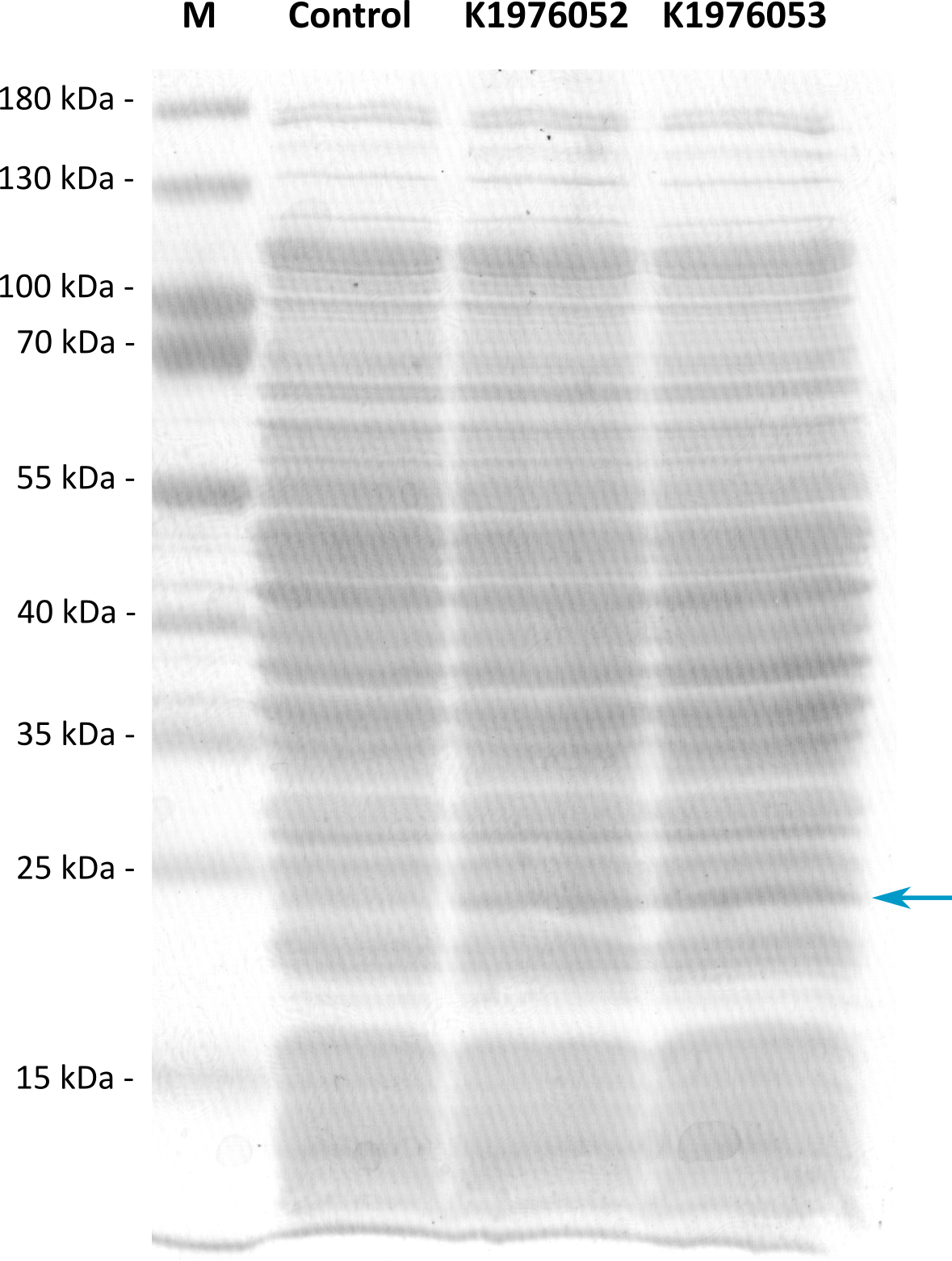 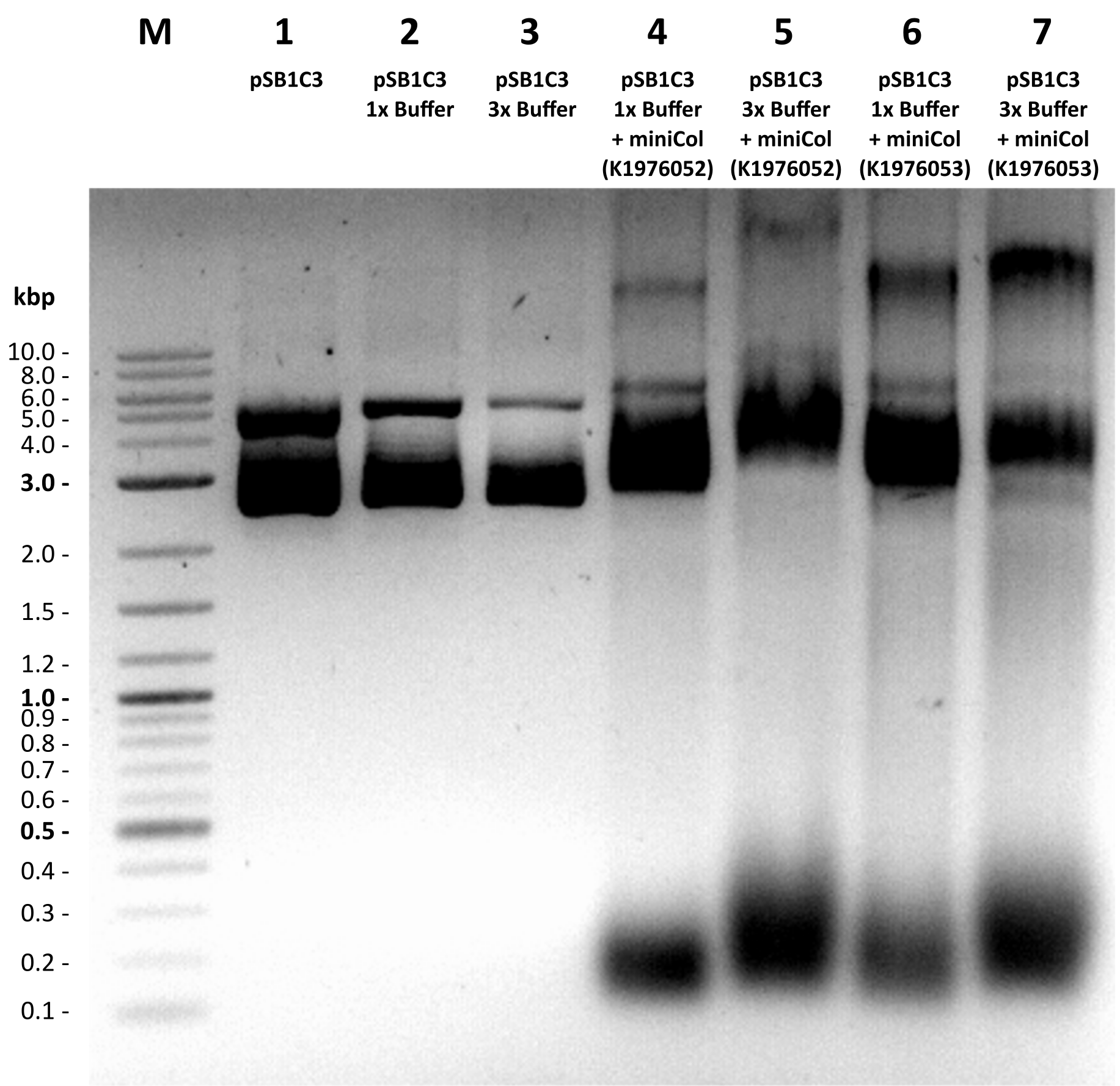 In order to detect a low unnatural amino acid concentration, we implemented a reporter system based on the fluorescent protein mVenus. We could create the basic bricks (verified by sequencing) that are necessary for this genetic circuit, but further experiments are to be performed.

Our biosaftey system is designed to be used in standard bacterial organisms like they are used in academic and industrial context. Therefore it is favorable, if our system causes a minimal metabolic burden to its host cell. In order to quantify the metabolic burden we genomically integrated GFP like it was previously done by Ceroni et al. 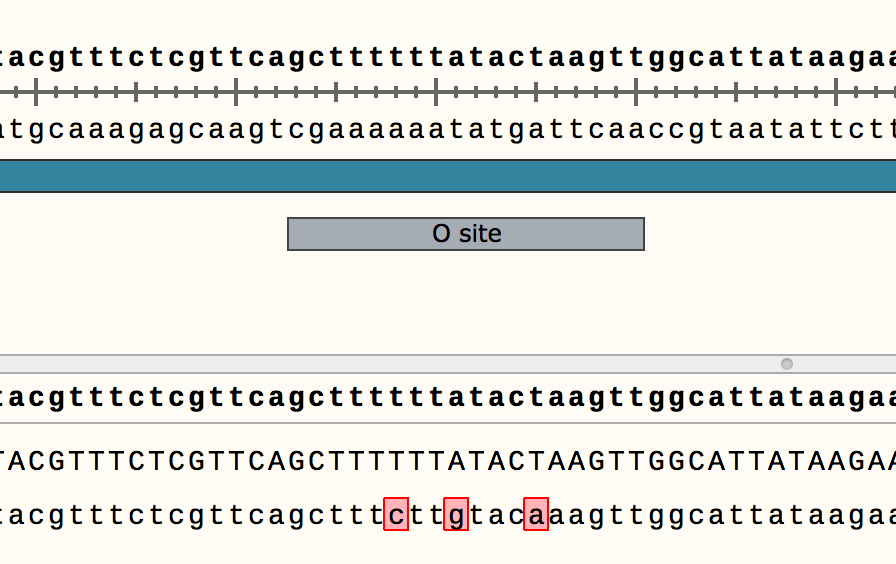 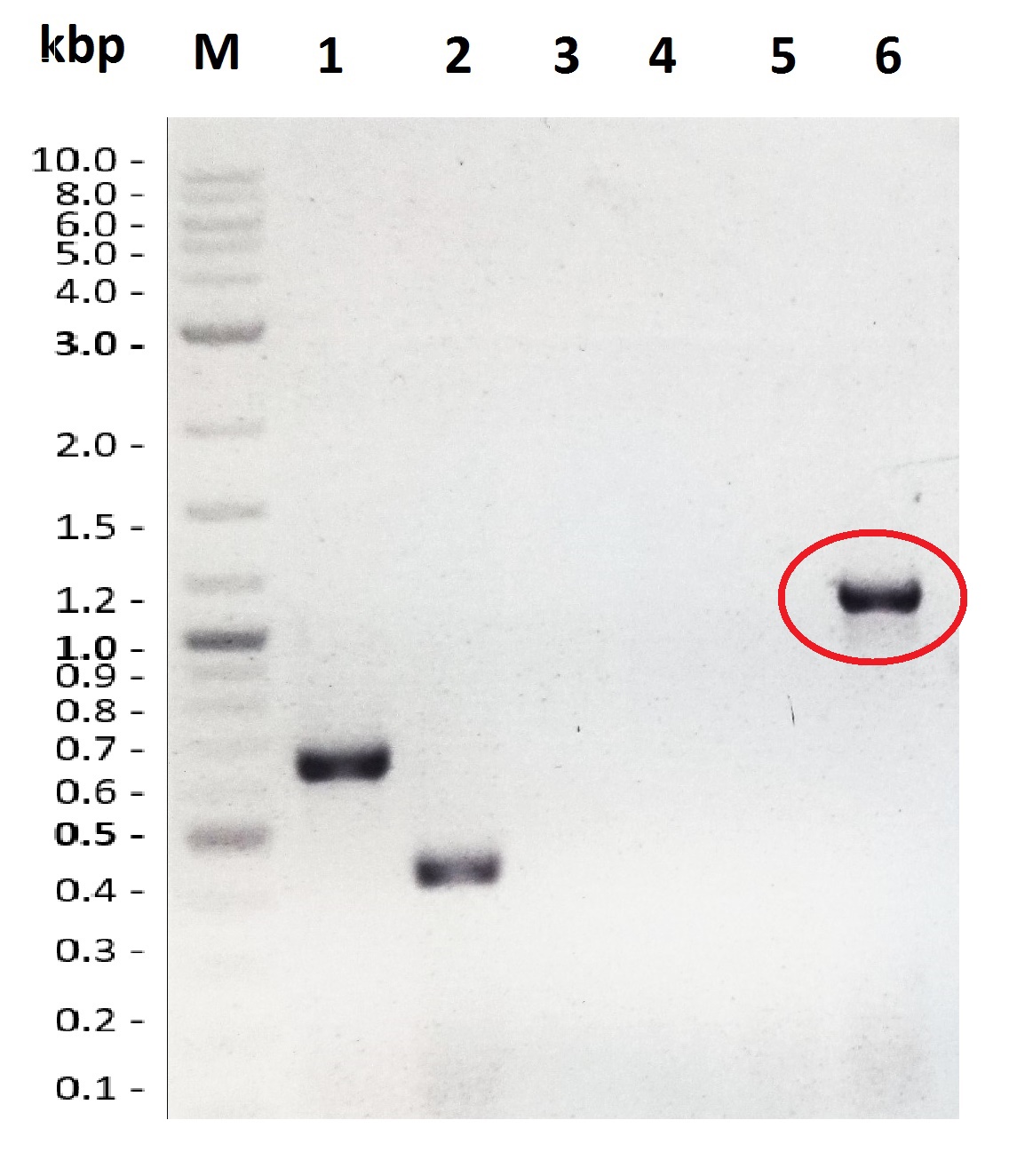 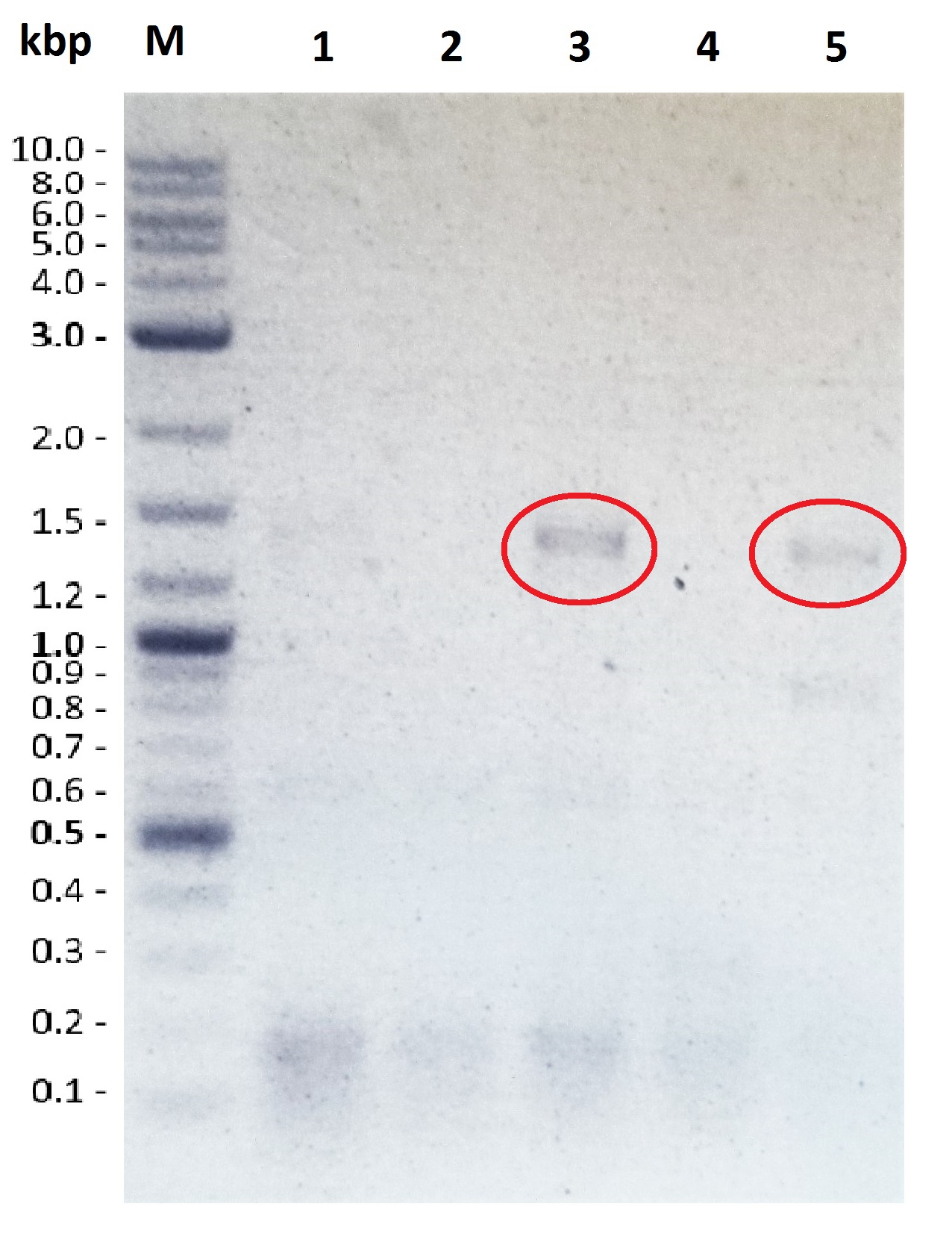 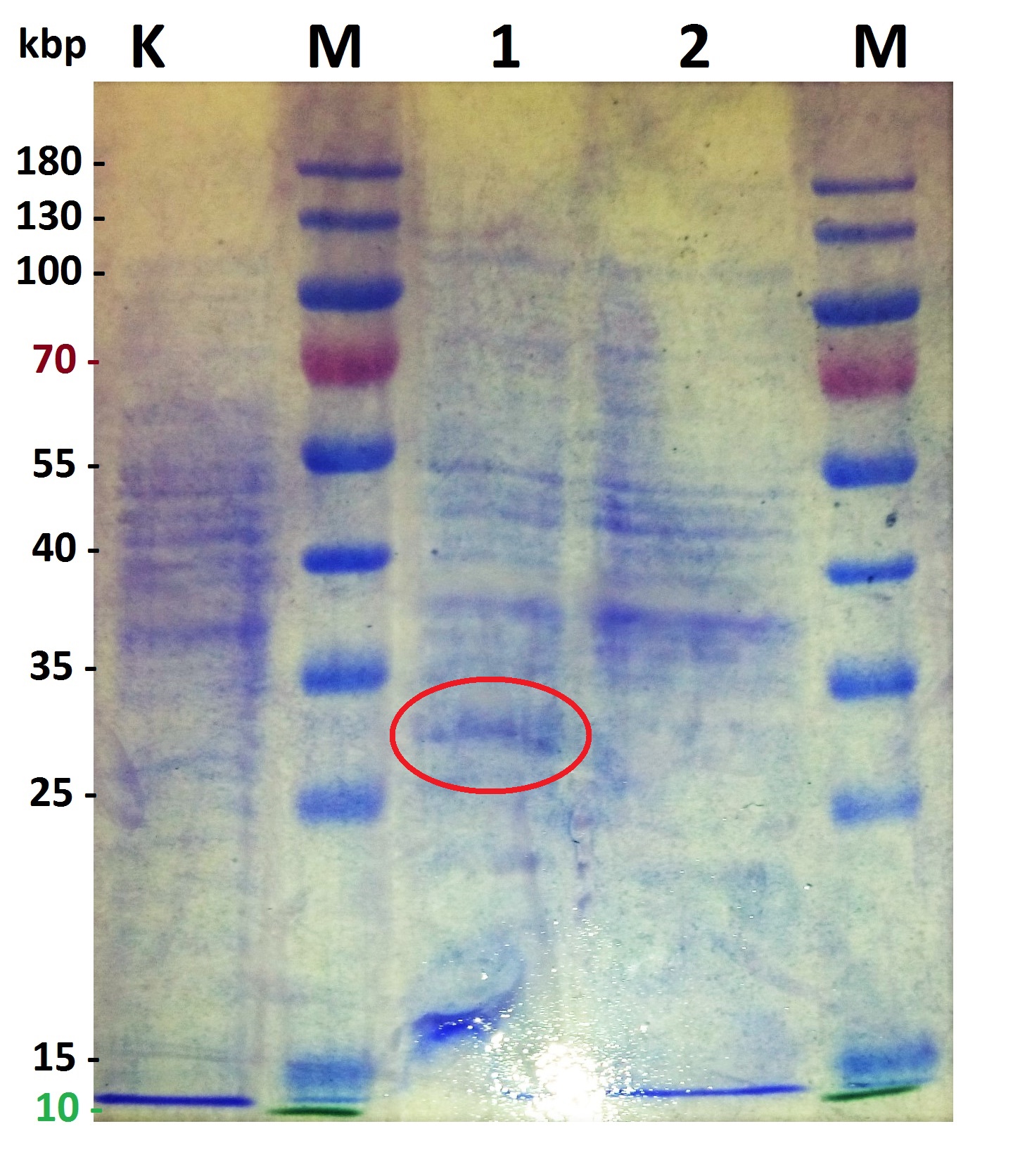 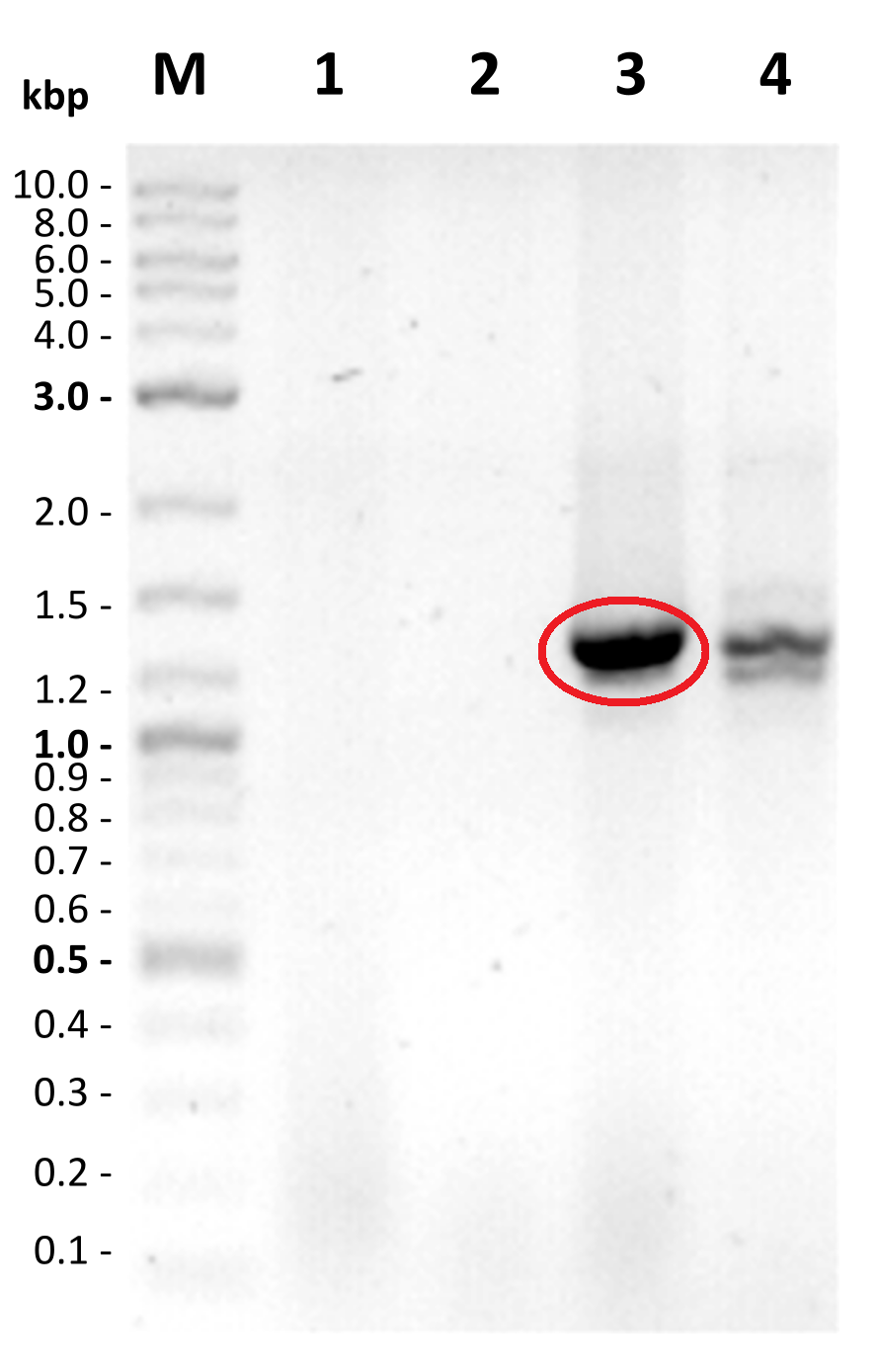 Modeling of the Interaction of MiniColicin with the Immunity Protein

Three amino acid positions were chosen for O-methyl-l-tyrosine (OMT) exchange evaluation (tyrosine 8 (Y8), phenylalanine 13 (F13) and phenylalanine 16 (F16)). These positions were selected because of their small deviation in regard to OMT and were therefore expected to cause the smallest structural differences. All molecular dynamics steps were performed on these mutation variants, as well as on the wildtype protein for comparison. All simulations were performed over 100 ns, leading to 10001 conformations each. These conformations were evaluated using RMSD, RMSF, SASA and the amount of secondary structures over time.
Figure 7 displays the RMSD in regard to the initial conformation. It can be observed that the mutational variant Y8O exhibits similar curve characteristics as the wildtype variant. The mutational variant F16O on the contrary shows a more severe deviation from the wildtype.

The solvent accessible surface area (SASA) was calculated for every simulation step using DSSP and is displayed in Figure 8. The little to no fluctuation in the SASA of all simulated variants is an argument for the high structural stability of the wildtype and the mutational variants. The disparity between the mutational variants and the wildtype can be traced back to the DSSP algorithm since it is based solely on natural amino acids. Therefore it cannot evaluate a non-natural amino acid and would cause a discrepancy between surface areas if non-natural amino acids like OMT are involved.

Additionally we evaluated the RMSF and the amount of secondary structures over time (data not shown) which exhibited no differences between the mutational variants and the wildtype. Therefore the results of these evaluation methods are not shown on this wiki.
Closing up we can conclude that the mutational variant Y8O does fit our demands best, since its behavior exhibits the least disparity in our applied evaluation methods towards the wildtype. Therefore Y8O was chosen for further analyses.
Furthermore we evaluated the stability of our designed miniColicin by performing 100 ns of MD simulations with different force fields (CHARMm27, AMBER03, GROMOS56a7). The RMSD of these simulations is displayed in Figure 15. It can be observed that some deviations between the different force fields occur. The simulation run with the GROMOS56a7 shows the biggest discrepancy towards the AMBER and CHARMm simulations which display little to no fluctuations over time. This behavior can be traced to the different parametrization approach in the force fields as well as to the fact that the GROMOS56a7 force field is a united atom force field, in which all CH3 and CH2 groups are described as one group.

Construction of a Pipetting Robot

In order to facilitate the work with our biosafety system, we constructed a pipetting robot based on an 'Ultimaker 2' 3D printer. This robot should be able to detect cell samples expressing mVenus, due to a low nnAA level, and automatically refill the respective samples with the nnAA.
The robot can move a probe in x, y, and z direction and the accuracy is as good as a normal 3D printer. It has an infrared table illuminating the samples homogeneously from underneath which makes a sample detection within a rack possible. Our syringe pump is working and can dispense single drops of liquids into the samples. Our tracking system is capable of detecting samples and also is capable of track them, if they are moved. The high power LEDs can excite mVenus and a long pass filter ensures to filter the high power LED light out for measuring only the light, emitted from mVenus. This makes it possible to take long time exposure photos to record more data. The camera has an auto focus routine to improve the data acquisition.
We started to program a GUI uniting the developed functionality.
Our robot can be controlled via a network and further improvements are already in pipeline.
We deliver a complete bill of materials, a construction video and all needed CADs. Furthermore, we deliver a full image for a 'Raspberry Pi' computer.