Our experiments were designed around synthetic DNA sequences with modified numbers of predicted hotspots. We custom-designed sequences to test specific hypotheses about sites that modulate a gene's risk of mutation in response to ultraviolet irradiation and oxidative exposure. There were synthetic and applied sequences in this methodology. The synthetic sequences were developed to have a certain susceptibility to mutations as increased number of pyrimidine dimer hot-spots or consecutive guanine residues. This set up of artificial genetic constructs allowed for testing of the hypothesis in a rigorous manner. Applied sequences were sequences that were actually genes, and were used in our experimental methodology in order to observe a realistic example of mutation rates. 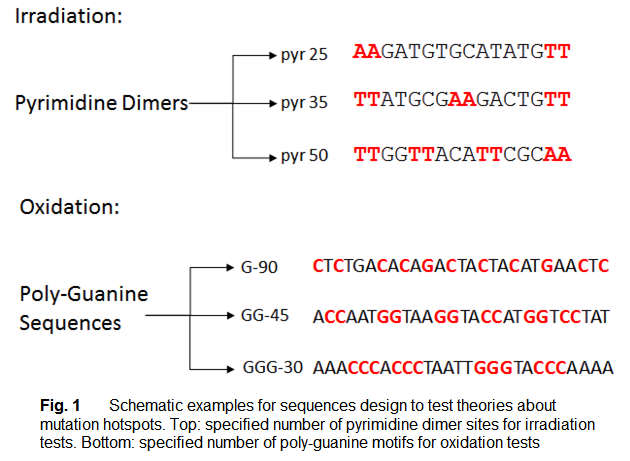 Synthetic sequences consisted of constructs designed for irradiation with ultra-violet and oxidation. To generate this artificial DNA sequence, we wrote an algorithm that modified a seed sequence until it met parameters for the number of di-pyrimidine sites and other constraints to make it compatible with current DNA synthesis restrictions. These constructs were in the range of 25, 35 and 50 di-pyrimidine sites and were used to test the effects of UV-irradiation on increasing pyrimidine hotspots. A similar approach was used to construct synthetic sequences that had a consistent number of guanine residues while alignment of residues varied in order to test rate of oxidation with respect to guanine superadditivity. These sequences took the form of G-90 (sequence with 90 guanine residues interspersed), GG-45 (sequence with 45 guanine pairs), and GGG-30 (sequence with 30 guanine triplets). 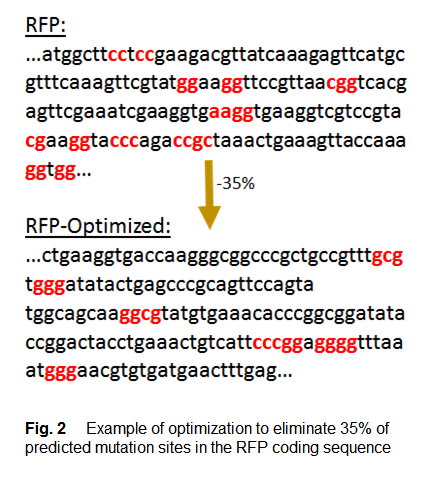 The experimental approach also tested applied sequences for both oxidation and UV-irradiation. These are actual genes that were either optimized to have lower or higher number of mutations via the algorithm developed. As there were separate synthetic sequences testing for oxidation and irradiation, similarly we had a mCherry construct for oxidation and GFP for UV irradiation. To optimize mCherry construct resistant to oxidation, an artificial DNA sequence, we employed the algorithm for modifying gene sequences to eliminate mutagenic sites. At these motifs, synonymous codon substitutions were made to eliminate oxidation-prone nucleotide sequences and replace them with ones with a lower mutation risk. For this sequence, our algorithm could eliminate 65% of poly-guanine motifs and an overall reduction in oxidizable guanines.

For UV-irradiation, an optimized GFP was constructed for resistance against UV. To generate this GFP variant with enhanced mutation resistance, we made synonymous codon substitutions to the commonly used E1010 RFP sequence in the registry. The algorithm removed sites that, upon UV irradiation, could possible form pyrimidine dimers, including CT, TT, CC, and TC base pairs. With these two applicable constructs optimized to be resistant to both irradiation and oxidation, the lacZ gene was optimized for both irradiation and oxidation using same procedures with the algorithm developed. There were constructs for minimum number of mutations and maximum number of mutations compared to the standard lacZ in the registry.