The main goal of our project was to improve the design of biological circuits in eukaryotic cells by developing modular and intuitive tools. These tools comprised a modular promoter, efficient repression of genes and inducibility for real world applications. As a proof of concept, we aimed to create actual gates based on our designs. Here is a deeper immersion into how and why we chose the parts we used to fulfill the objectives we set ourselves

The modularity of the promoter is a central point to biological circuits in general and therefore to our project too. We were inspired by last year’s iGEM EPFL project which also focused on finding efficient ways to build logic gates in cells. This team worked with a minimal promoter called CYC1 and we followed in their footsteps. The advantage of this promoter is that the sequence can be modified, without changing the expression of downstream genes (see figure 1).

Figure 1: the sequence of the minimal promoter CYC1 can be modified with no impact on the expression of the promoter.

Moreover, the locations of these interchangeable parts are very convenient. One of them is located at the beginning of the promoter. When targeting a gRNA recruiting a transcriptional activator to it, either through a scaffold or fusion to dCas9, expression of the promoter is increased. Another is positioned very close to the TATA box and repression of the downstream gene is observed when a gRNA in complex with dCas9 is present on this site (see figure 2).

Figure 2: CYC1 promoter has two interesting sequences that can be modified and exploited in biological circuits: an “activating” sequence (A) and a “repressing” sequence (B), where activating, respectively repressing, gRNAs can be targete and modifiy the expression of the downstream genes.

These two special features allow us to design different versions of the promoter almost ad infinitum and avoid cross-talk between the different elements of the circuit. It means that when a gRNA is produced, it can only target a single region of a particular CYC promoter and does not interfere with the other ones (see figure 3). Therefore, all the CYC variants can be induced or repressed when required and assembled together to easily design complex gates.

Figure 3: the advantage of the CRISPR/Cas9 system is that cross-talk inside the circuit can be completely avoided by choosing a 20 base pairs sequence completely different for each gRNA.

The first real challenge came with finding a repressor that was efficient. This was a determinant step because biological circuits require a way to repress expression of the genes in order to process information and act on the cell. As Zalatan et al. 2015 did not focus on repressing genes in yeasts but only in mammalian cells, we had to find our own way to do it. After some research, we found a repressor that had already been used for biological circuits and that showed efficient repression when fused with dCas9: Mxi1 (Gilberts et al., 2013). Originally, Mxi1 is a mammalian transcriptional repressor which drives deacetylation of the DNA and is also active in yeasts. We were not sure what to expect about the level of repression of Mxi1 when recruited and not fused to dCas9. What we were sure of however, was that we had to try and test it! To give ourselves the best chance to succeed, we also created a scRNA with two recruiting scaffolds attached to it to recruit two Mxi1 at the same time and see if repression was more efficient (see figure 4).

Figure 4: the two constructs we tested to repress genes, recruiting one or two times the repressor Mxi1 fused with PCP RNA binding protein.

We knew it was possible to have two scaffolds on the same scRNA as Zalatan et al. had already done it for activation. They monitored a stronger effect when two activators were present, thus we hypothesized it could also be the case for repression.

With our construct, we aim to create efficient biosensors, and therefore we had to find a way to make our system responsive to specific inputs like proteins or chemical compounds in the environment it is exposed to. To prove that our transistors could provoke a different response according to the molecules they encounter, we chose to work with the inducible promoter GAL1, induced by galactose, and the constitutive one TDH3. When galactose is absent from the medium, GAL1 is repressed and TDH3 is expressed. TDH3 then drives the expression of RFP, therefore making the cells fluorescent green. When galactose is added to the environment, the expression pattern of the cell changes: GAL1 is not repressed anymore and can express GFP along with a gRNA that is designed to bind to TDH3 and inhibit it sterically by CRISPRi.

Figure 5: To be helpful in resolving real-life issues, the circuit has to respond differently according to the situation. Here we show how our system respond to absence (A) or presence (B) of galactose.

The final step of our project was to design actual logic gates that would allow the cells implemented with them to process useful information and respond dynamically to it. We imagined various classical gates with the scaffold system such as NOR, AND and XOR.

These gates always comprised inducible promoters to convert the presence or absence of the molecules we want to detect to a signal in the form of scRNAs that our circuit can interpret. The only issue was that the gates were conceived in such a way that activator and repressor scRNAs were binding to the same promoter at the same time. It raised an interesting question: who wins between the two scRNAs? We hypothesized that repression was the strongest, as Mxi1 deacetylates DNA and leads to its condensation (see figure 6). When DNA is compacted, the activator gRNA should not be able to bind anymore, making it powerless.

Figure 6: Designing in cells logical gates analogous to those in electrical circuits is challenging. The only way we found to do so was involving two gRNAs with opposite effects being targeted at the same promoter at the same time. That's why we had to address this issue and determine what happened in this case.

To prove that our design was functional, we produced two scRNAs at the same time, an activating one and a repressing one, targeting the same promoter and monitored its response.

Finally, we wanted to create a real gate and we chose the NOT gate. We decided to do so to prove that our separated experiments could be brought together to make a functional and inducible gate. 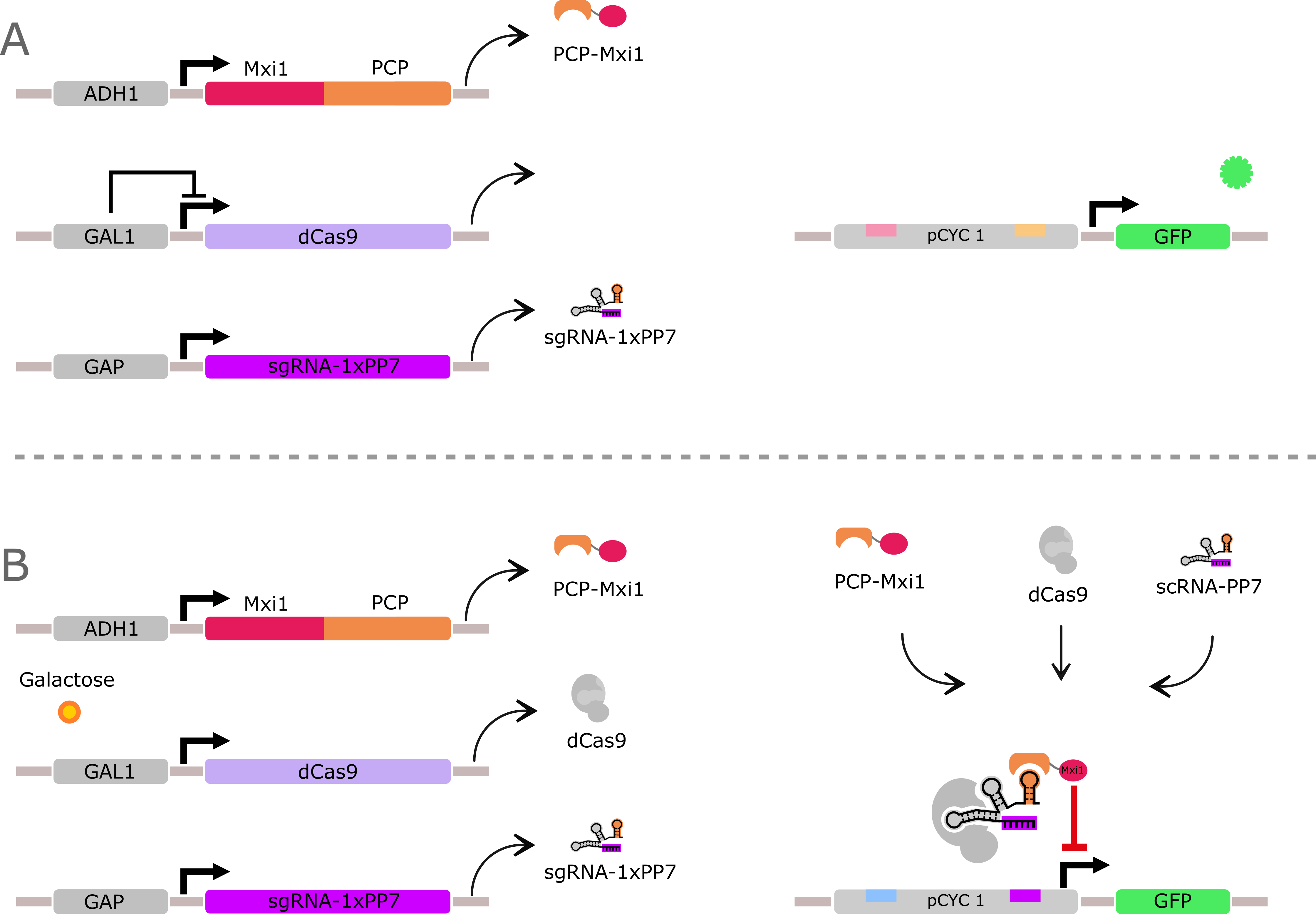 Figure 7: One way to achieve an inducible NOT gate. This gate is one of the simplest possible and is the foundation of any biological circuit. In this example, the NOT gate is inducible with galactose. We show the distinct responses with (B) and without (A) galactose.