Figure 1: AND gate design: Our AND gate operates through a nitric oxide sensing transcriptional activator (NorR) and an AHL sensitive repressor (EsaR).

Our associative learning system requires simultaneous detection of two signals. The first signal is nitric oxide, which serves as a marker for inflammation. The second signal can be a number of different microbiome markers inside the gut. We chose AHL as one example and constructed an AND gate that can detect NO and AHL.

NorV promoter(PnorV, BBa_K2116002) controls NO dependent transcription in E.coli [1]. Gene expression can only be activated when NO binds the PnorV transcriptional activator NorR.

Initially we wanted to see how much NorR we would require in order to sense a range of NO from 20-200μM, which is the range that is typically seen in IBD [2]. We modeled the system based on parameters found in the literature. Our model suggested that endogenous production of NorR in E.coli [3] is enough for our desired range of sensitivity. Thus after successfully cloning the NorV promoter, we tested its activity with the endogenous NorR. DETA/NO was used as a source of NO. Using our NO release model for DETA/NO, we could show that the PnorV promoter is active within the range of 20-200μM of NO we would like to detect in the gut (Figure 2). 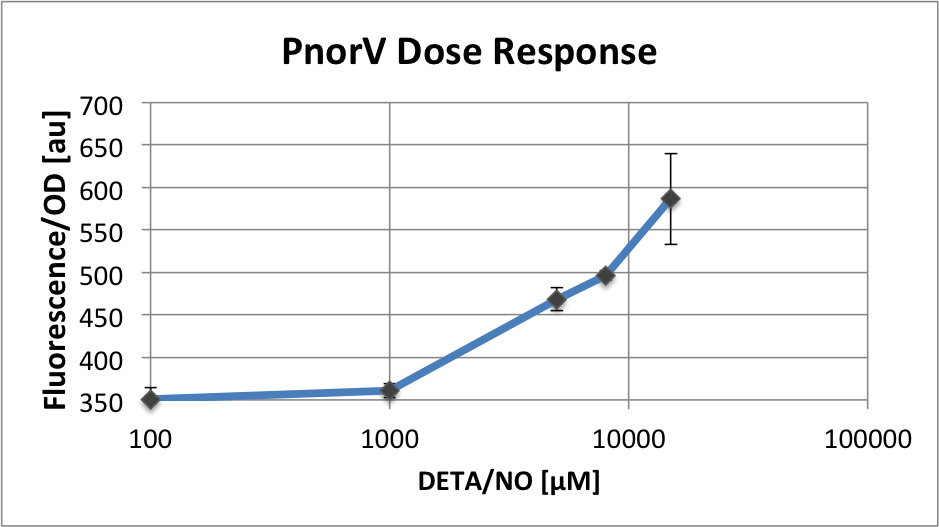 Figure 2: PnorV dose response curve for a range of DETA/NO concentrations that corresponds to 7-70μM of NO. Based on the insights we got from our model, we tested the promoter only in presence of endogenous NorR in E.coli. We can show that the activity range of the promoter is within the 20-200μM range that corresponds to inflammation in the gut [2]. The dose response does not reach full saturation since too much nitric oxide effects growth of bacteria. Fluorescence measured with a plate reader, 6 hours after induction. Error bars represent S.D. from three technical replicates. 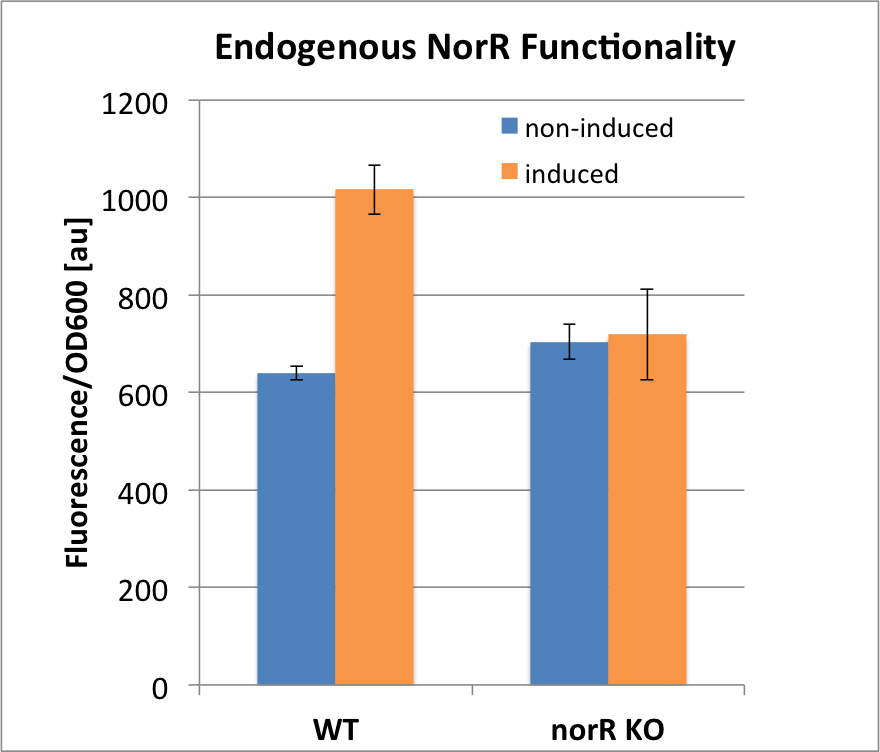 Figure 4: Mechanism of transcriptional repression by EsaR. In the abscence of 3OC6HSL EsaR dimerizes and binds the esabox sequence to repress transcription.

Figure 5: Construct to test EsaR/esabox system. An esabox was placed after the constitutive promoter (BBa_J23118)..

In order to characterise repression efficiency of EsaR, we placed esaboxes after a constitutive promoter (BBa_J23118).(Figure 5) During dose response tests we discovered that EsaR system displays non-sigmoidal dose response. With the intermediate AHL concentrations we tested, there's a dip in the dose response curve (Figure 6). This corresponds to concentrations close to the saturation point of the dose response. Our AHL sensor model could later explain the reason behind this behaviour.

Based on this insight from the model, we changed the amount of EsaR we express inside the cell to reduce the dip in the dose response curve. Our strategy was to put two copies of EsaR under individual constitutive promoters( BBa_J23118; expressing EsaR on a low copy plasmid instead of the initial medium copy plasmid; and expressing EsaR under a stronger constitutive promoter (BBa_J23102). In the end we obtained the best results with increasing EsaR expression through the stronger constitutive promoter (BBa_J23102). Even though we cannot obtain fully sigmoidal behaviour, we managed to reduce the effect of this phenomenon on the EsaR dose response. (Compare Figure 6 and 7). Consequently we decided to use this construct for assembling our complete system. 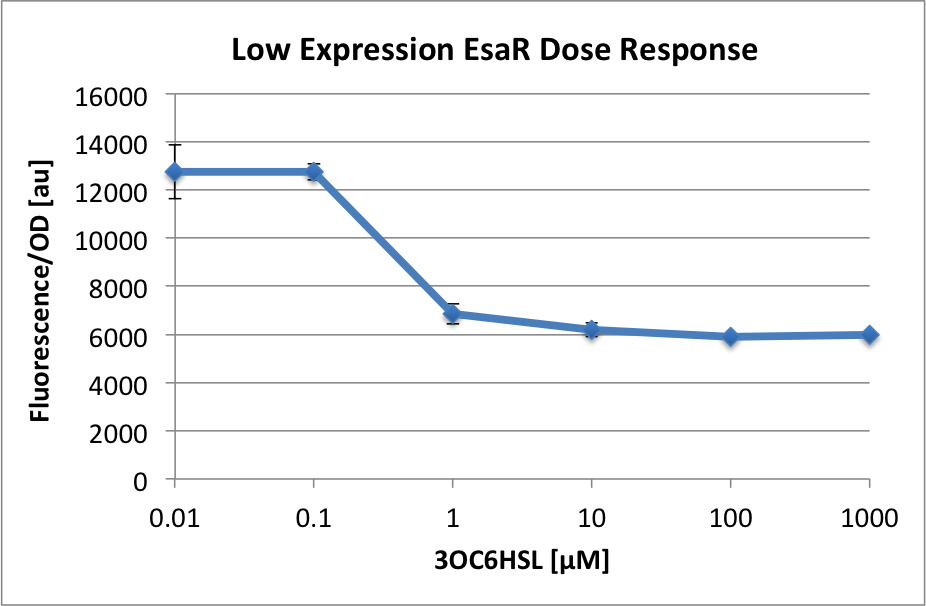 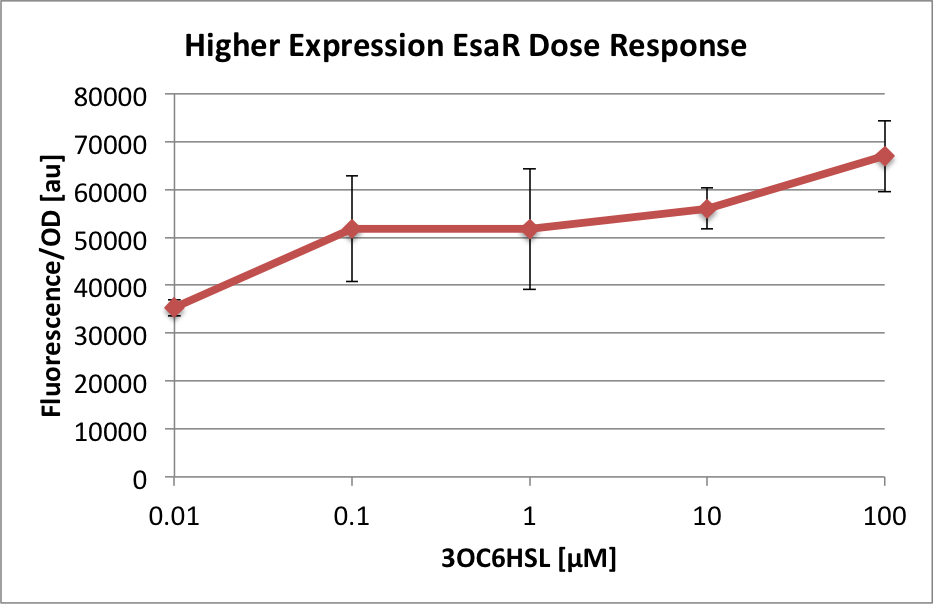 We generated AND gates by placing esaboxes either;

i) as roadblocks after transcription start site of PnorV, preventing the polymerase from advancing or;

ii) within the PnorV to establish competitive binding between NorR and EsaR or RNA polymerase and EsaR.

(Check out our Part Collection for examples)

Figure 8: One example of our AND gates responsive to NO and AHL. This is the AND gate we eventually used for our complete system. Nomenclature: NRB-NorR binding site, sigma54B-RNA polymerase binding site.

Our complete system would express a recombinase under the control of this AND gate. From the model of the switch we know that low leakiness of the AND gate is crucial in order to ensure reliability of the stored information, thus the best AND gates are the ones that exhibit the highes fold-change activation. Following these indications, after characterizing our collection we decided to use the AND gate seen in Figure 8, since it showed the highest fold activation (Figure 9). 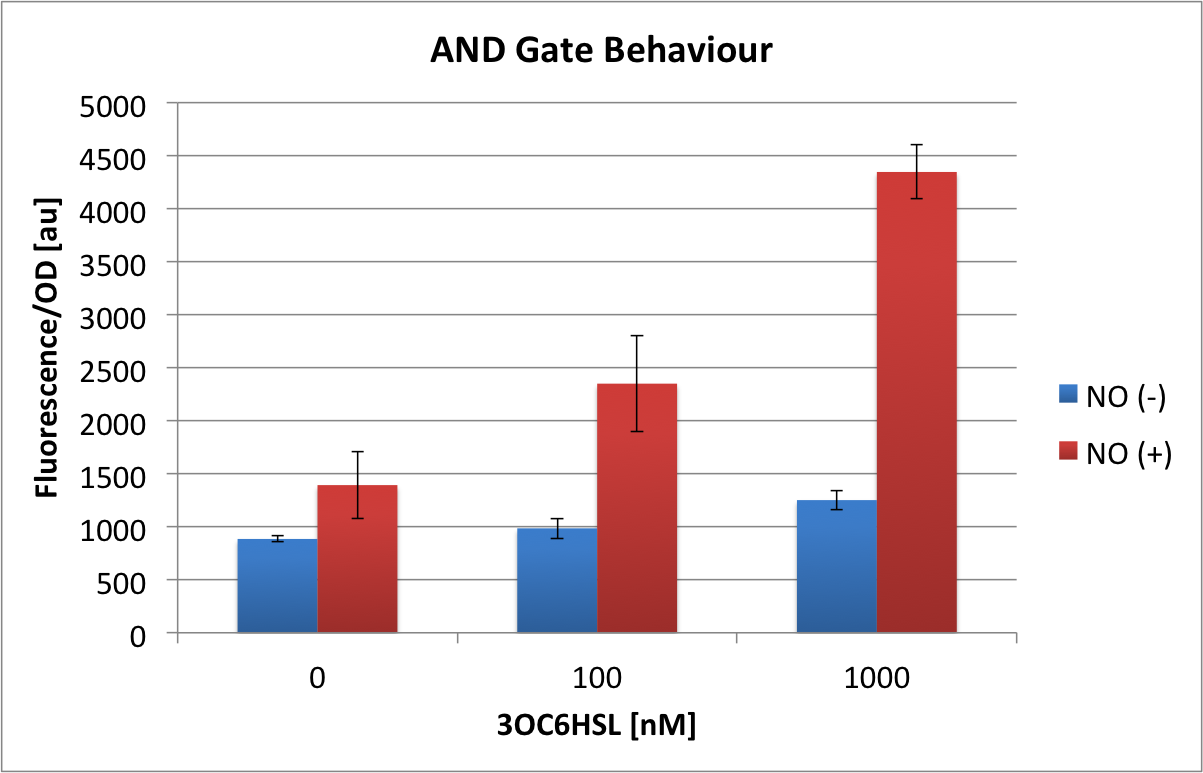 Figure 9: The AND gate we selected to use for our complete system displays 4-fold activation and low leakiness, fulfilling the criteria suggested by our model for the switch Induction was with 5mM of DETA/NO Fluorescence measured with plate reader 3 hours after induction. Error bars indicate S.D. of three technical replicates.

An important requirement for our AND gate is that the second input should be easily exchangeable. This is where our learning circuit gets its flexibility from. This was an important motivation behind choosing an activator system for the NO part, and a repressor system for the AHL part of our AND gate. In order to demonstrate this flexibility, we exchanged the esaboxes with the lldO operators, allowing us to create an AND gate responsive to lactate and NO (Figure 10). 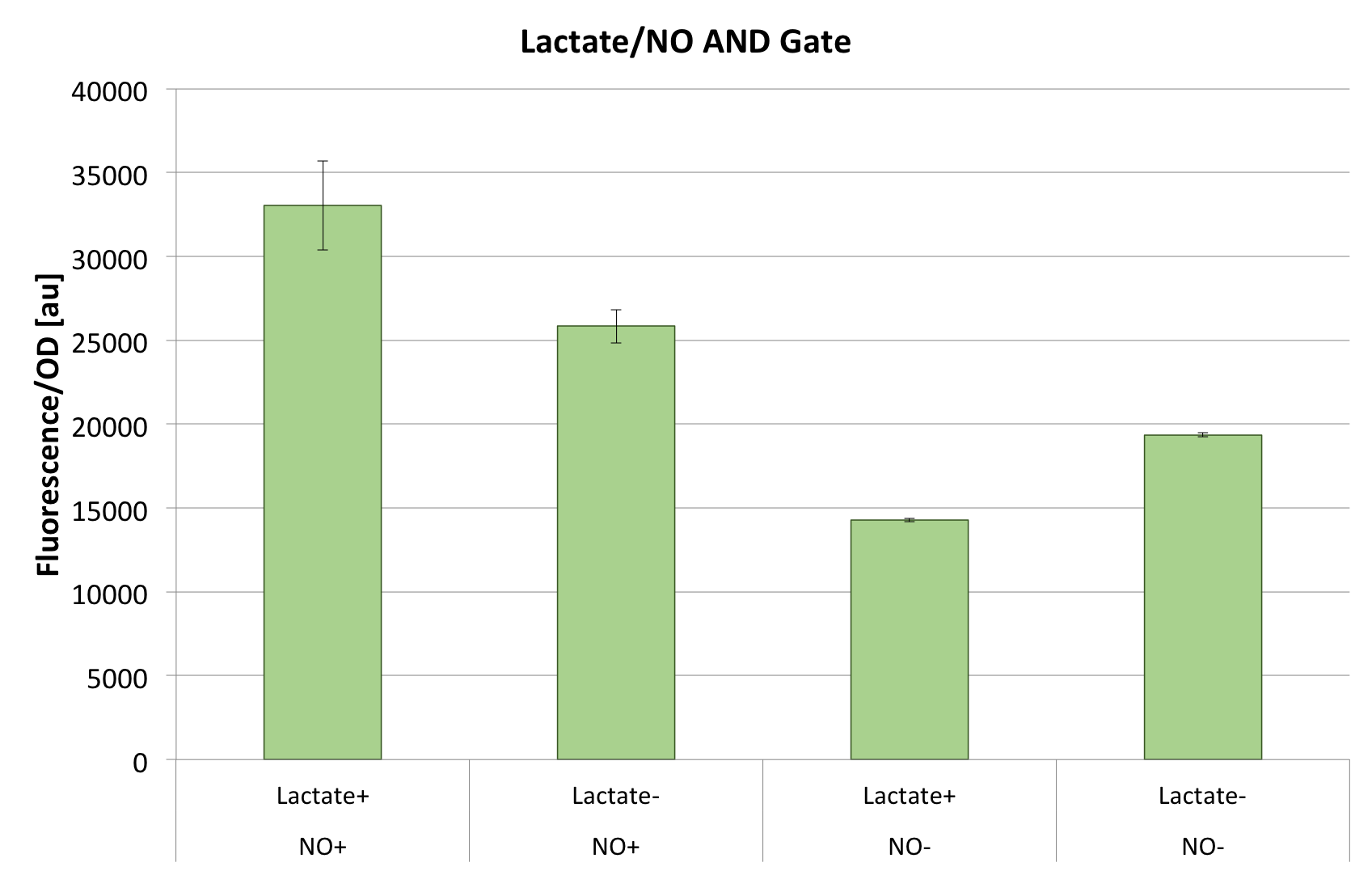 Figure 10: An alternative AND gate responsive to NO and lactate. Demonstrates the flexibility of our system. Induction was with 5mM DETA/NO and 10mM lactate. Fluorescence measured with plate reader 3 hours after induction. Error bars indicate S.D. of three technical replicates.

The switch and the reporter together form the memory and read-out part of our associative learning system. Our reporter is a dual fluorescent construct, expressing the red fluorescent protein mNectarine when the system is OFF, and gfp when the memory has been triggered. This switching is induced by a recombinase that can flip a directional promoter flanked by attP and attB parts it recognises (BBa_K2116024). After flipping the promoter no longer faces mNectarine, but now faces the gfp.

We cloned two recombinases, bxb1(BBa_K2116026) and tp901(Bba_K2116035) under the Ptet promoter. Since recombinase flipping is irreversible, our initial aim was to avoid leakiness as much as possible. Hence the recombinases were designed with weak RBS and fast degradation tags.

However our initial results, and our model eventually suggested that this was not the optimal design. Even when we removed the degradation tag the flipping was too weak.

Under advice from the model we also decreased the repression of Ptet promoter by expressing TetR on a low copy plasmid rather than a medium one. These improvements resulted in significant improvement of the switch. We can now show that flipping at 8hours is about 3-fold more efficient compared to before (Figure 11.) In addition, the flipping kinetics satisfy the requirements defined by the model almost perfectly. 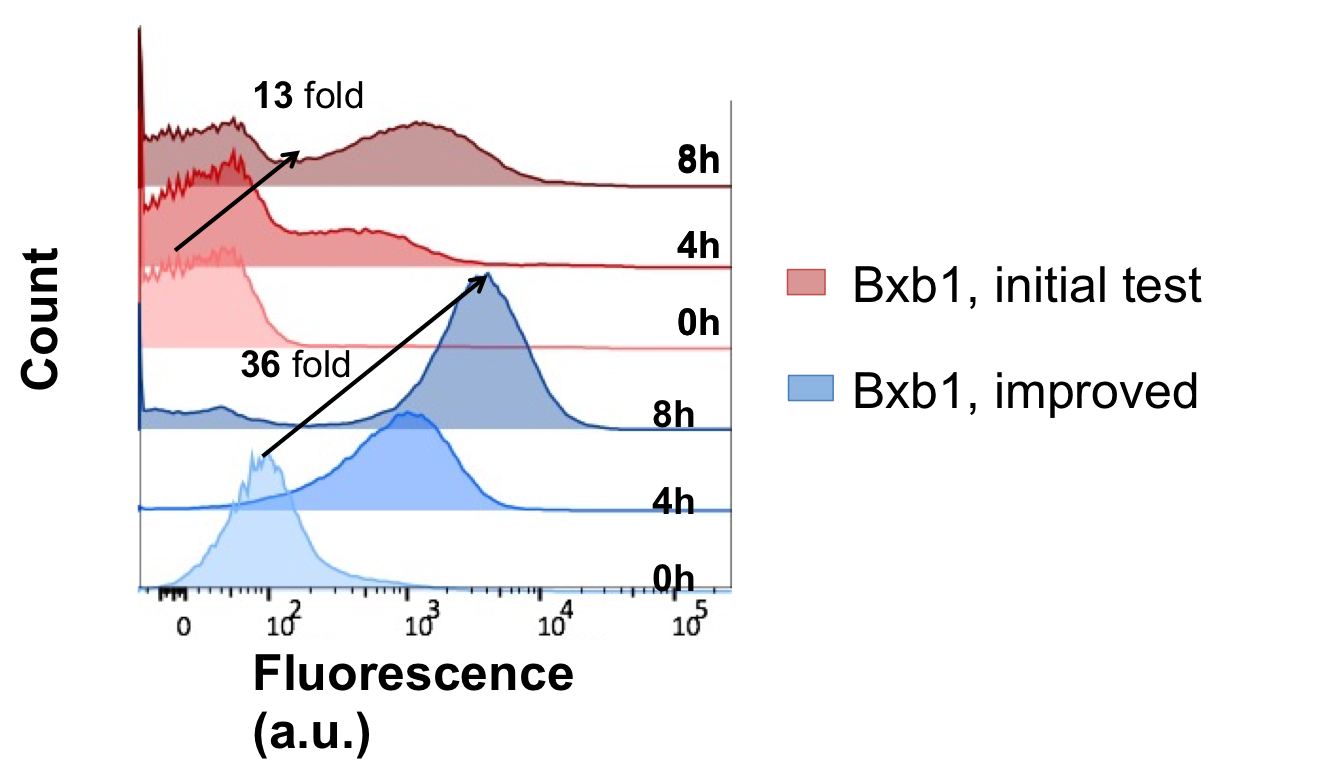 Figure 11: Bxb1 flipping activity. When a directional promoter is flipped by bxb1, gfp is expressed. Here we show the distribution of cells expressing gfp under the control of bxb1 flipping. The weak RBS results in ~3-fold less efficient flipping over 8 hours, compared to the improved RBS which is stronger. Data was generated through flow cytometry analysis. The error bars indicate SEM.

We started modeling the system already during the design phase, allowing us to provide a quick proof of concept of the proposed curcuits. Figure 12 shows the functioning of the full system: Pavlov's Coli is encpsulated in a pill and is ingested by the patient. During transit in the gut the system is exposed to the inflammation marker (NO) and the candidate marker (species-specific AHL). In presence of both markers the promoters of the switch start flipping, storing the association event on the DNA. After recovery of the pill, the system is exposed to the candidate marker (AHL) again and since AHL was associated with an inflammation marker, GFP is expressed again. 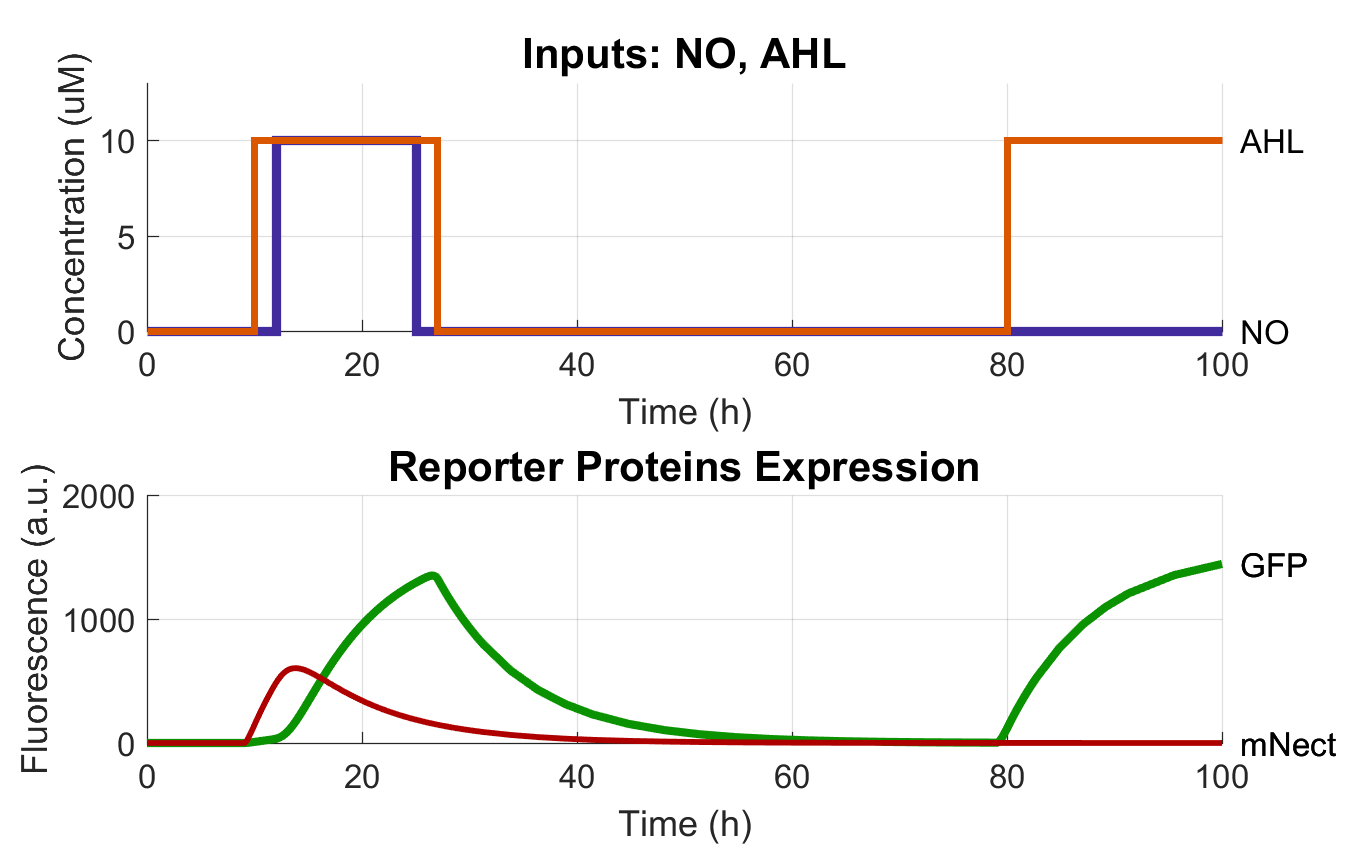 Figure 12: Simulation of the full system. Once NO and AHL are detected at the same time, our memory element start switching. After recovery of the pill, the system is exposed to AHL again and expresses GFP if NO and AHL were detected.

Once we showed functionality of all individual system components we assembled our three component system. There were a few issues with assembly:

The results demonstrate a potential for proper AND gate behaviour and simulatenous detection of NO and AHL. We believe that system activation in presence of only AHL is due to the problems caused by the incompatible oris. 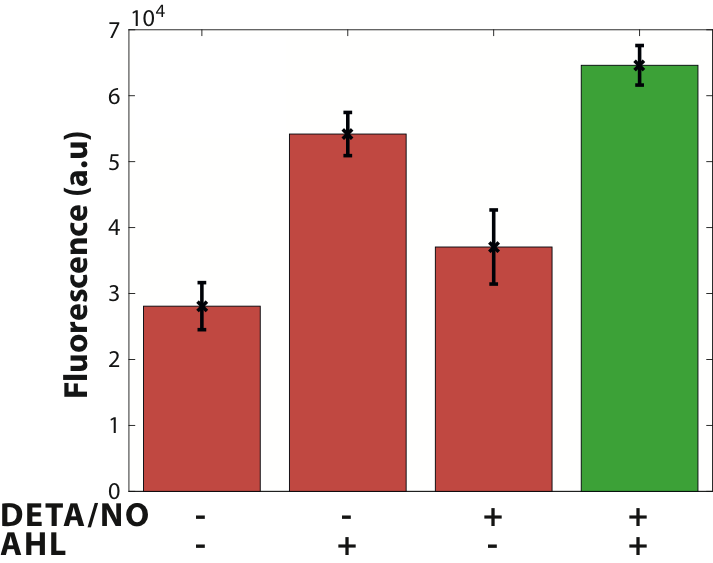 Thanks to the sponsors that supported our project: