In order to understand what types of products are available or that are in the testing phase, our team did some research to look at how we could design our product to improve upon the issues in the products we found.

The above table shows a comparison between Coagu.coli and blood coagulants that are currently in the market. As you can see, most of these products are not available to be used yet, and are not affordable. Looking at each coagulant more specifically though, we can recognize the faults present in each:

QuikClot:According to the official QuikClot website, this coagulant intercepts in the natural blood clotting cascade at the very beginning. It uses a substance known as kaolin, which starts the clotting process with the activation of factor XII. Since this factor is located at the start of the clotting cascade, this product will not be as “quick” as the name suggests (Z-Medica, 2014). QuikClot has also been known to be troublesome to remove from a wound after application as the material can become too hard if it is left too long in the wound. Bleeding can also resume after removal (NurseAmyandDrBones, 2015).

VetiGel:This coagulant seems to be the best out of all the others. It is fast and affordable. The only problem is that it is not yet ready to be revealed in the market for human use, and has only been focused on being used in veterinarian clinics on animals (Weller, 2014).

Tisseel Although this factor has not been included in the table, Tisseel is known to be made from substances made of human plasma, which “can contain infectious agents”(Center & Evaluation, 2014) and transmit diseases. Looking into the other faults that this coagulant contains, Tisseel is not available to be used in a home setting by an individual. Instead, it is supposed to be applied by a healthcare professional in a medical setting (Drugs, n.d.). And since Tisseel is a fibrin sealant, it is found to be more expensive than other types of coagulants (2009).

Duraseal and Floseal: These are both surgical compounds and would not be beneficial to an individual for use on a normal wound. (Corporation, 2016; pdriscoll, 2015).

Xyntha: This coagulant is only useful to people with a deficiency of factor VIII (classic hemophilia), and isn’t useful to other types of hemophilia or Von Willebrand's disease (Pfizer Inc, 2016).

Overall, the table shows just why our product Coagu.coli is the perfect coagulant. 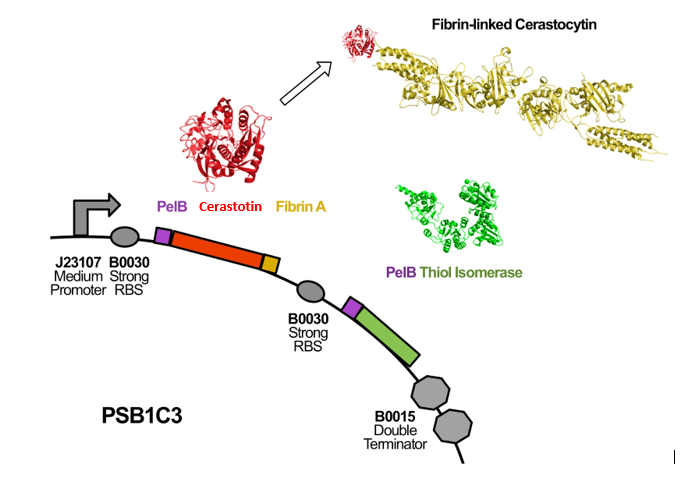 To obtain our goal of an accelerated clotting process, we have deployed the venom serine protease “Cerastotin” which will act on the thrombin, bypassing multiple factors in the clotting cascade and cut long fibrinogen strands into fibrin monomers which will stop the bleeding at a greatly accelerated rate. In order for the venom to stay localized at the wound site, we have augmented a short fibrin peptide with the venom that will polymerize with the other fibrin monomers at the wound site. With the polymerization of the venom within a permanent clot and with blood pressure directing flow to the wound, the venom will not be traveling throughout the body and initiating a clot other than that of the wound site.

We chose a constitutive medium strength promoter (J23107) and a medium/strong RBS for our construct in order to produce an ample amount of venom, but also allowing our Thiol isomerase time to stabilize the multiple disulphide bonds in the venom, so the protein will fold properly and its enzymatic activity increases.

To ensure our venom protein folds properly, we have a periplasmic signal attached to both the venom/fibrin protein as well as the thiol isomerase. Foreign proteins don't fold well within the rough cytoplasm, so we sent our proteins to the periplasmic space which is a more ideal situation for our venom. With addition to the DsbC, the enzymatic activity of the venom should be significantly higher which in turn should accelerate our clotting. By having our proteins in the periplasmic space, we only need to puncture the outer membrane in order to lyse the cell. This function also allows us to release our construct without introducing E.coli inside the body.

The design of our first construct induced a rapid production of clotting proteins and in order to supplement it, we have designed a construct that would stabilize the clot and sterilize the wound. In order to stabilize the clot, we added Human Factor XIIIa (propeptide removed) which is the enzyme responsible for the polymerization of fibrin monomers, by keeping the promoters and binding sites the same strength we ensure that all of the fibrin-venom strands bind at the wound site and form a permanent plug that will not be easily re-opened. Having Factor XIIIa will accelerate the rate of polymerization which further ensures that the venom-fibrin strands will stay localized.

In addition, we have added an AntiMicrobial peptide to insure that all bacteria and infection that is potentially in the wound is sterilized. We have deployed the AMP LL-37 which punctures the outer membrane of bacterial cells causing their organelles to become exposed, ending in the cells dying. We have paired the AMP with a thrombin cleavage site that when introduced to the venom serine protease (Cerastotin) from our original construct, will cut the AMP that is bound to Factor XIIIa at the thrombin site, and at that moment become a functional protein that sterilizes the wound.

In order to apply our product to the wound, we will contain our construct in a pre-filled syringe that can be applied to the wound which would be followed by a bandage for sealing it in place. Although our team discussed various other application methods such as spray, gel, or gauze, we eventually decided on the syringe and bandage because of advice and feedback we had received from interviews that were conducted. For instance, a bandage is more resistant to cold temperatures, easy to apply and was the most popular answer on the survey.

We decided to use a syringe because it is already in use by other blood coagulants, for example Pfizer and Xyntha.