The blood that we are using for our experiments in our wet lab was donated by a local butcher shop called The Mad Butcher and it was stored in 1 litre containers. Different amounts of the anticoagulant heparin were added to the containers. We added heparin because we didn’t want the blood to coagulate in the containers before we started to use it in experiments. We chose specifically to use heparin over other anti-coagulants because heparin combines with antithrombin-III which binds to thrombin to prevent thrombins action in the blood clotting cascade.

For our first experiment with the blood, we added 10 mL of blood into 5 standard petri dishes. Two of the petri dishes acted as our negative controls, where there was nothing added to the blood. The results that we expected to see, was little to no clotting after 24 hours. We added 1.0 mL of our viper construct cells into our third dish, 1.5 mL to our fourth dish and then 2.0 mL to our fifth dish. We timed these dishes over the time span of 24 hours to see how much of the blood coagulated. The reason for this lab was to see how quickly the blood would clot naturally (without the addition of our construct) and the effect that our construct had on the blood (meaning, if it speed up the clotting time). The results of this experiment were that the petri dish that contained the 2.0 mL of our viper construct cells produced the largest clot followed by the dish that had 1.5 mL of our construct and then by the one that contained 1.0 mL of our construct. The controls of this experiment had very little of the blood clotted when 24 hours had passed. Because of these results we can infer that our viper construct cells do have a positive effect on the clotting process by forming a clot.

We did a second experiment that included the pig’s blood. The point of this experiment was to see the effect that our viper construct cells had on the blood as compared to our control cells (which contained PRNA cells) and also compared to just the blood that had the heparin mixed into it previously (filtered and nonfiltered). For this experiment, we used another container of blood that had 70 mg of heparin already mixed into it. We added 10 mL of blood into 9 standard petri dishes. For one of our petri dishes we just had the blood inside the dish as unfiltered, meaning that we just pipetted the blood with a volumetric pipette from the blood container into the petri dish.For the second dish we filtered the blood with kimwipes to see if there was any small clots that were in the blood still. For these two dishes we did not add anything else to them--these were strictly to see how the blood clotted by itself. For our control protein we used PRNA to determine if it would have any effect on clotting the blood or not. The PRNA was chosen for our control because it was just cells that did not have our construct in them. We added this PRNA to 3 of our dishes for our negative control dishes. Again we expected to see that the addition of the PRNA cells would have no effect on the blood in terms of clotting.For the first control dish, 1.0 mL of the PRNA cells to the blood. For the second dish, 2.0 mL of the cells was added and for the third control dish 2.0 mL of the cells was added along with 1.0 mg of heparin. We added 1.0 mL of our viper construct to another petri dish with just the 10 mL of blood mixed in. The second dish contained 1.0 mL of our construct, the blood and an additional 1 mg of heparin. We also had another dish that had 2.0 mL of our construct in it as well. All of these dishes were timed over the span of 80 minutes to see at what point in time when half of the blood that was inside of the petri dish had coagulated. 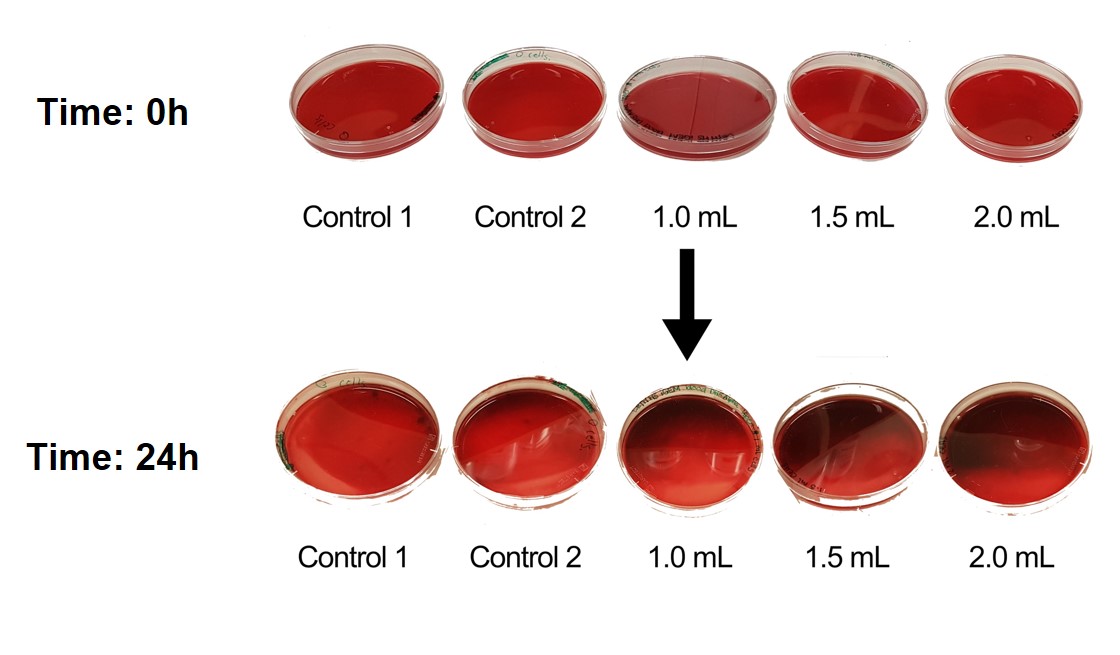 In the future we are going to do additional testing to see the full amount of time it takes for a clot to fully form as well as running multiple runs of these experiments to better our results that we have so far. We also want to run an osmotic shock periplasm test to see what is stored in the periplasm and hopefully there will be our viper protein and the Thiol isomerase.