To infinity! And beyond!!

Knowing that several of our truncated mutants is able to activate our reporter gene, we now turned our attention to using dCas9 for the activation of an endogenous gene. The difference between reporter gene and endogenous gene activation is the copy number of our template within the cell, with the former in larger amounts than the latter.

We tried to activate an endogenous gene, ADAR2 in HEK293 cells. ADAR2 is a dsRNA-specific adenosine deaminase involved in A-I conversion. Such conversions would result in amino-acid substitutions, splice junction alterations, RNA stability chnages, etc. It has been shown in human patient, downregulation of ADAR2 expression and hence underediting Glu2 has lead to amyotrophic lateral sclerosis diseases. GluR2 are generated postransciptionally by RNA editing. Unedited GluR2 have high Ca2+ permeability. This high Ca2+ flux into cell has caused neuronal death in mice model. Thus, activating ADAR2 with dCas9 might be one of the potential future treatment for amyotrophic lateral sclerosis diseases.

Our advisor, Dr. Yuan Ming, is also using dCas9-VPR for the induction of ADAR3 and ADAR2 expression in H1 human embryonic stem cells. We used the gRNA designed by Dr. Yuan Ming to test out if our truncated dCas9 could activate endogenous ADAR2 and ADAR3 in HEK293 and H1 cells. After 48 hours of transfection, RNA is extracted from the cells and used for RT-qPCR analysis. GAPDH RNA is used as control for normalisation. 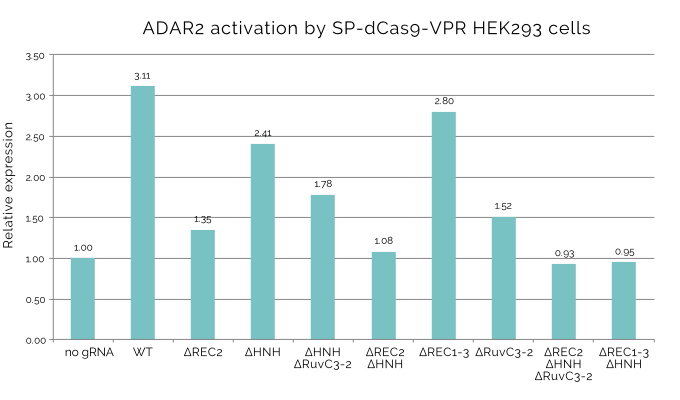 ADAR2 activation in HEK293 cells with only one gRNA used.

ADAR2 activation with only one gRNA seems to correlate with our proof of concept experiment. ∆REC1-3 and ∆HNH mutants are able to retain ~80% WT activity while ∆RuvCIII-2 ∆HNH double truncation mutant still has >50% activity. We then tried out these truncated mutants for ADAR3 activation on H1 embryonic stem cells cultured by Dr. Yuan Ming. ADAR3 is also a dsRNA-specific adenosine deaminase involved in A-I conversion. However, ADAR3 specifically expressed in neuronal cells. ADAR3 activation predisposed human ES cells to a neuronal fate. 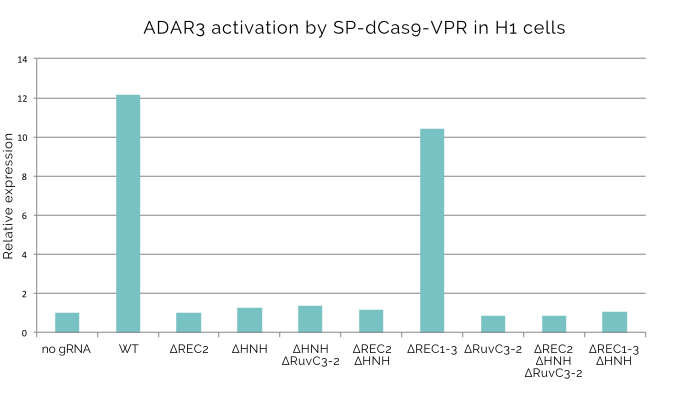 ADAR3 activation in H1 embryonic stem cells with only one gRNA used.

Only ∆REC1-3 truncated mutant is able to activate ADAR3 in H1 cells. However, further testing have to be done on other truncations to determine parameters for optimal performance of these truncations.