The CRISPR/Cas9 system can be a beacon of hope for genetic diseases but can also be the harbinger of doom if used unethically. We investigated on the prospects of this technology by surveying the opinion of Singapore's community. On the other hand, we have combine techniques of Computer Aided Design(CAD) sofwares and PyMOL to customise proteins for 3D printing. 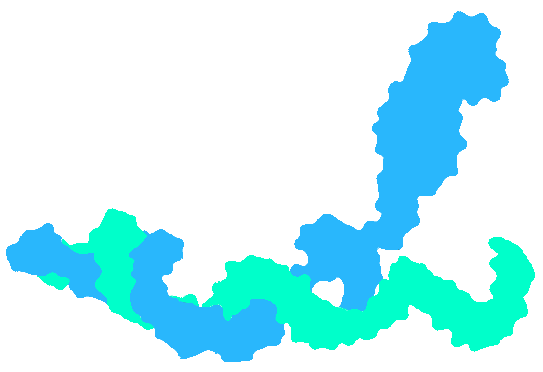 We're lucky to be in the era of 3D printing. In our opinion, science education are not only fun but cognitively stimulating when there's a model for us to play with. Hence, we decided to design 3D models of Cas9 during our exhibition. This is the process of how we improvised to allow more customisation to our proteins.

For 3D printing, all files have to be converted to .stl fromat. From the web, we have found that we can convert a .pdb file to .stl file with USCB's Chimera software.

Hence, we were very excited and we tried to print a small protein, insulin, in it's alphe helical structure as a start! However, we met few challenges. 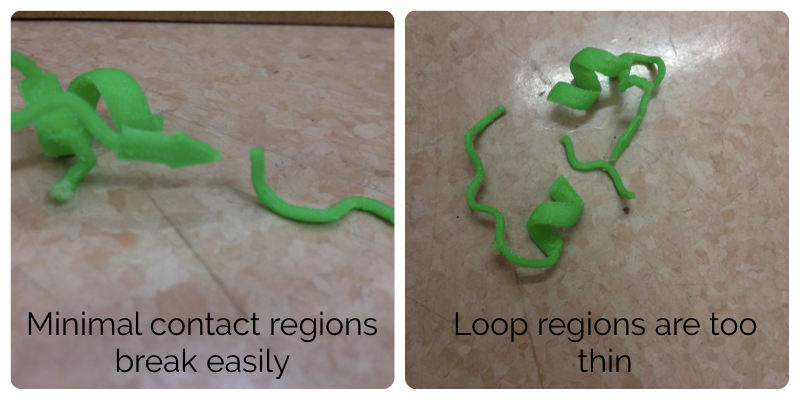 To solve our problem, we found out that PyMOL is able to make our structures thicker and, hence, more rigid. After thickening our loop regions in PyMOL. We have to export our desired structure in .vrl format and then convert to .stl with Chimera. On the other hand, we can also repair vulnerable points in the structure in AutoDesk MeshMixer. 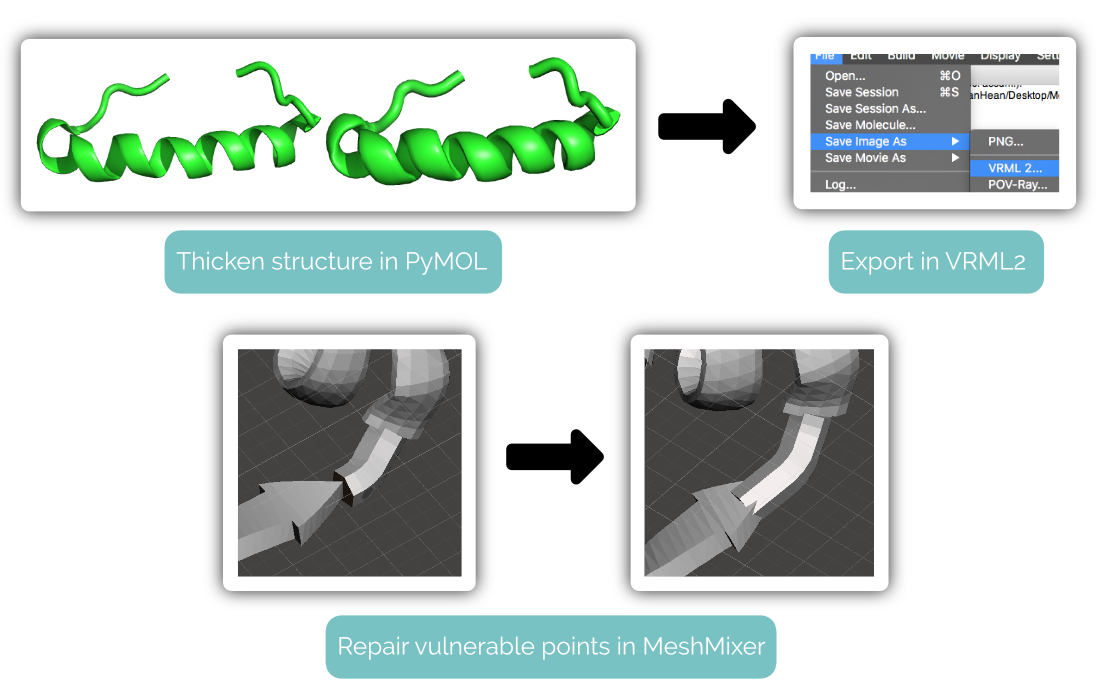 Now, we can have thicker and more stable helices. 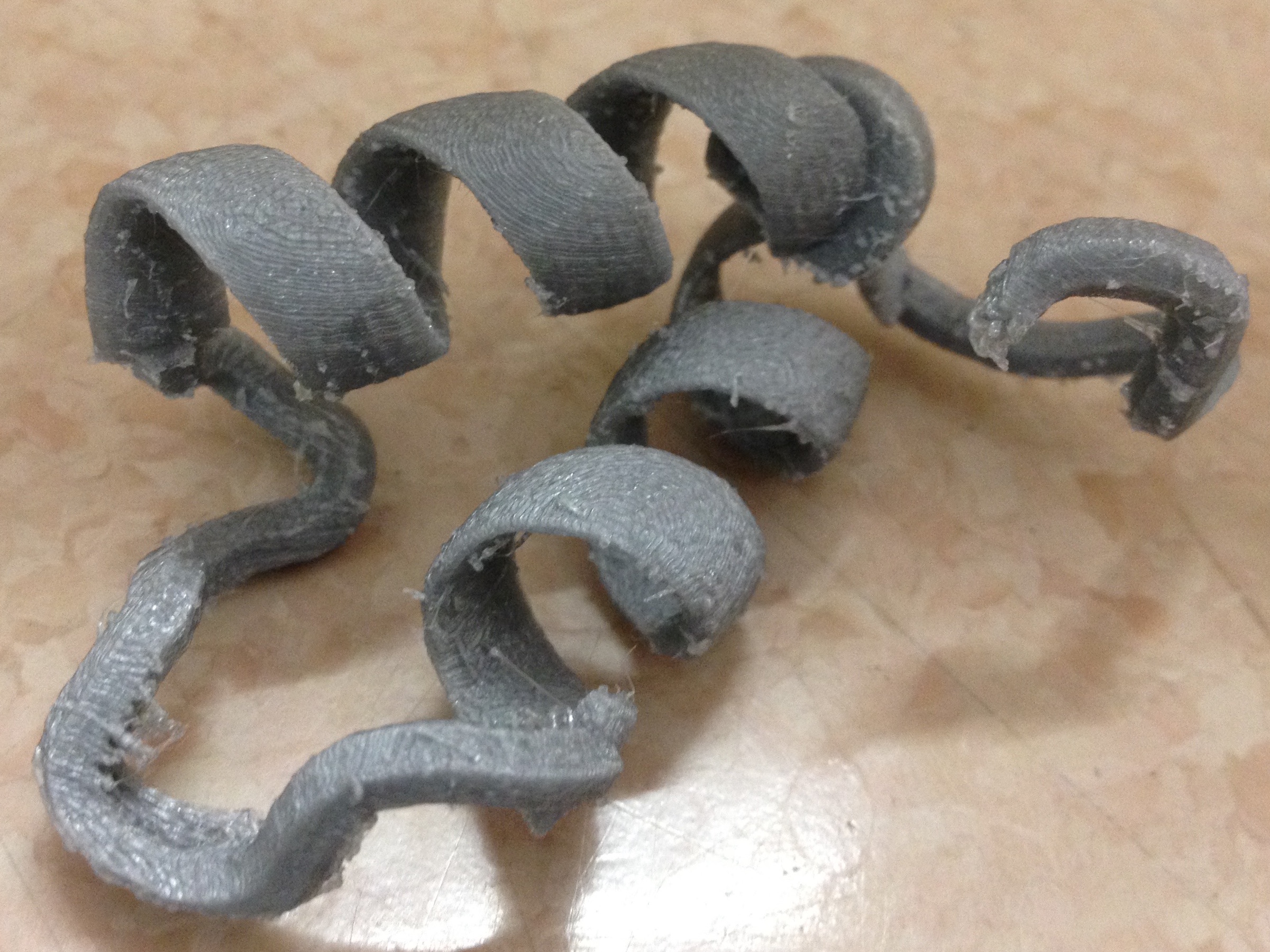 We also came out with an idea to put joints into the protein to make our models more interactive and less static. We used, Autodesk Fusion to design joints for our protein. By using, Autodesk MeshMixer, we are able make modifications to our protein structure, like adding joints to our protein. More detialed instructions can be found here. 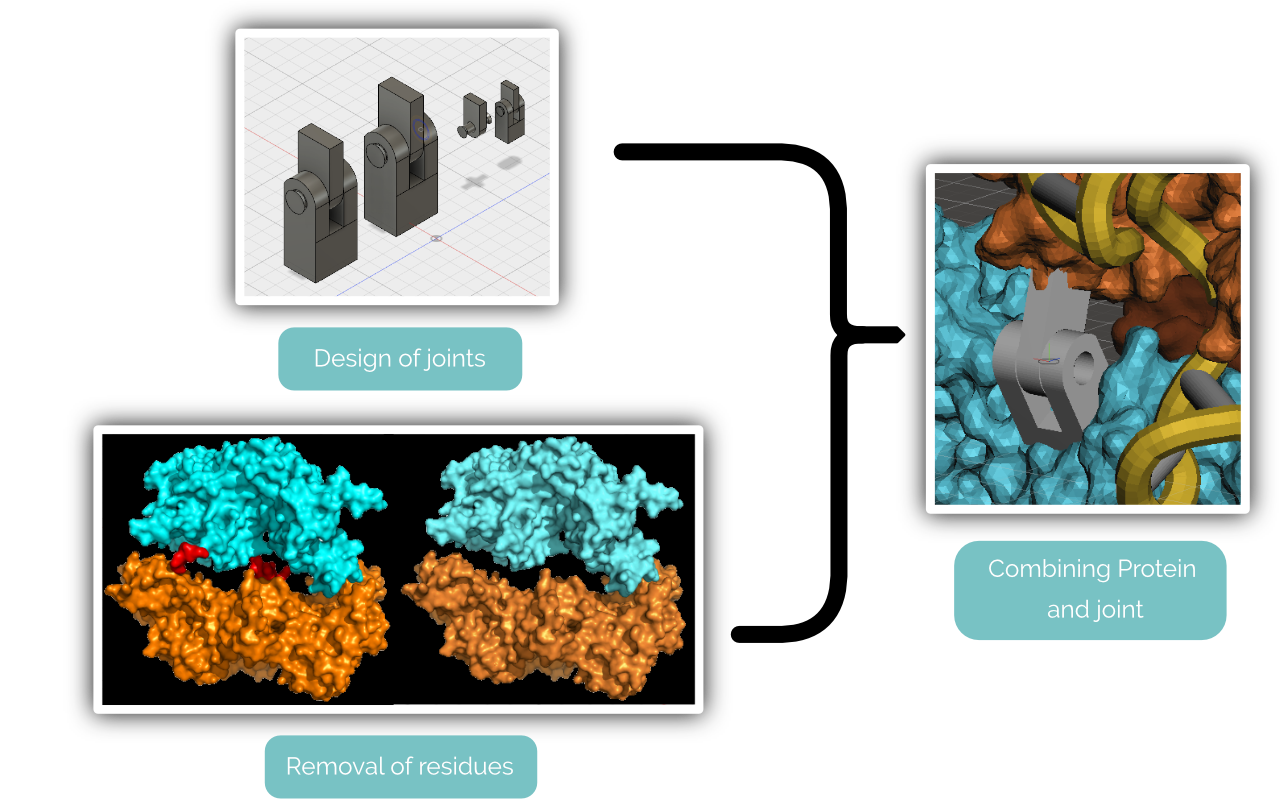 During the summer holiday, we have participated in a nation-wide scientific exhibition representing our school and showcased our project on evaluating different Cas9 variants. Aiming to promote the awareness of the public on our project thesis-CRISPR/Cas9 system and also hear from the public opinions, we have conducted a survey during our exhibition booth at One-North science festival on Aug 5 and 6. We have collected the responses from 110 participants who have visited our booth and are interested in the topic of genome editing. A series of questions were asked in the survey, regarding their educational background, knowledge on synthetic biology and their attitudes towards the ethical issues and controversies of utilizing the CRISPR technology in human beings. And based on their responses, we have determined their acceptance level of the usage of CRISPR and their utmost concerns of its application. Subsequently, we have integrated their opinions into our research project, to tackle the concerns being raised by the public. 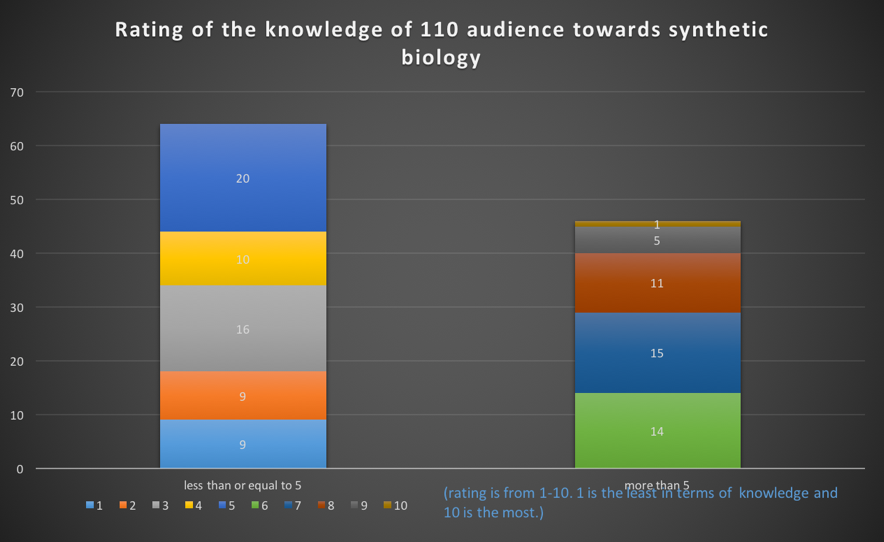 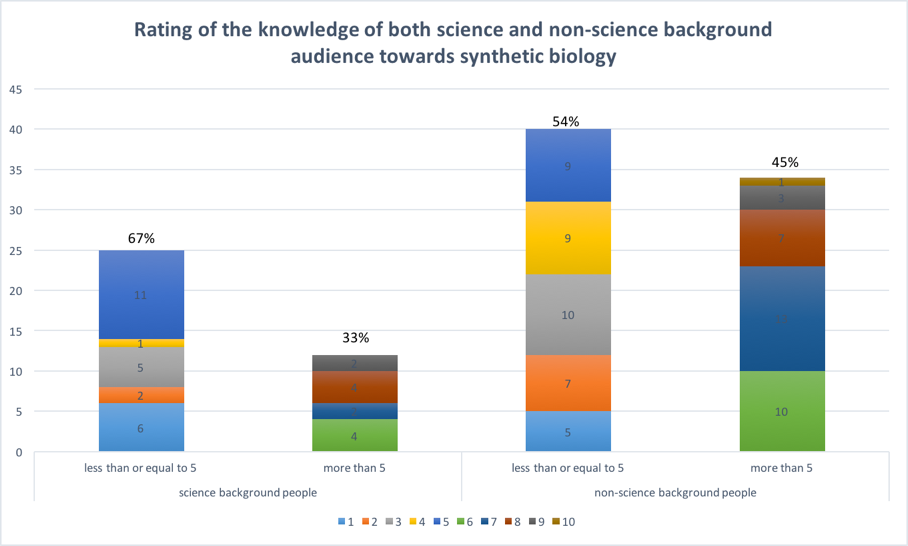 In order to attest our assumption, an analysis was done on the feedback of our booth with regards to the usefulness and helpfulness of our education to the participants. The question was asked in a grading form that is similar to the last question, from 1-10. 71%(78/ 110) of the participants agreed that their understanding on synthetic biology have been improved by a lot (greater or equal to 6). Hence, this finding has verified our hypothesis that our educational booth would increase public knowledge on synthetic biology, and it also inspires us to reach out to a wider audience especially young kids and older generations who has less knowledge on synthetic biology. Moreover, about half of the visitors (56 of 110) have either heard or known about the CRISPR technology only after visiting our booth, meaning there are still a lot of people who are unaware of this breakthrough technology and need to be reached out even though CRIPSR has made a great sensation in the media and the newspaper.

It is known that CRIPSR and other genome editing systems are powerful tools which have huge potentials to be used in different areas such as biological research, medicine and healthcare, transgenetic food, and even manipulating human genes. Hence, we would like to hear what the folks are mostly interested in and to what extend it shall be allowed to apply. Four questions have been asked to collect their opinions as listed below:

a. Considering DNA can be easily manipulated now, which area should be prioritized for future improvement?

Five choices have been given to the participants, Research and development of diseases, Healthcare, Energy production, Food production, and others. Most of the people (48%) have selected healthcare as their prior usage for genome editing. 30% of the folks also voted for the application on research and development of diseases as priority instead of directly employing it into healthcare and medical treatments. And there are few others (18%) gave their choices into energy and food production because they believe the world desperately needs environmental protection; and sustainable food and energy production would relieve the issue to a great extent. 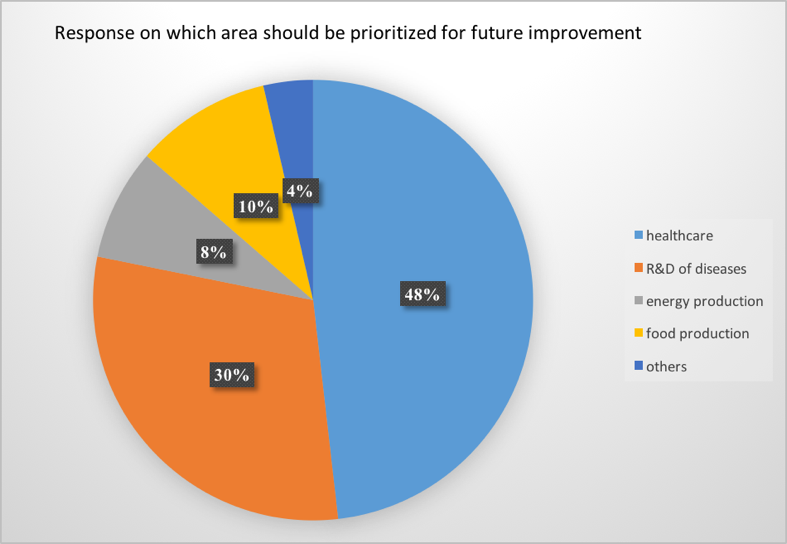 b. CRISPR may potentially be used to correct defective genes. However, there is a very small chance that it may accidentally alter another unknown part of your DNA. If you are a patient considering CRISPR therapeutics, will you take the risk and still proceed with the treatment?

We have briefed the risks of CRIPSR to the participants, namely off-target effects and low efficiency that causes treatment failure. The responses were then taken after they were fully aware of the risks they need to take if they were patients. We have found out that more people would be willing to consider CRISPR therapies than refusing it (70 vs 40). However, even though most people would take this treatment, the reason is due to all the other available treatments’ also have their side effects and hence they have to choose the one with lower risks and better treatment results. For instance, the available therapies for cancer such as radiation and chemotherapy all have their side effects, and they would rather take therapies like CRIPSR which is new and more sophisticated that cures the cancer diseases at its root problem - gene mutations. Thus, we realized that there is a demand from the public that we need to improve the efficiency of the CRISPR technology and also ensure it is safer and more convenient for medical usage. 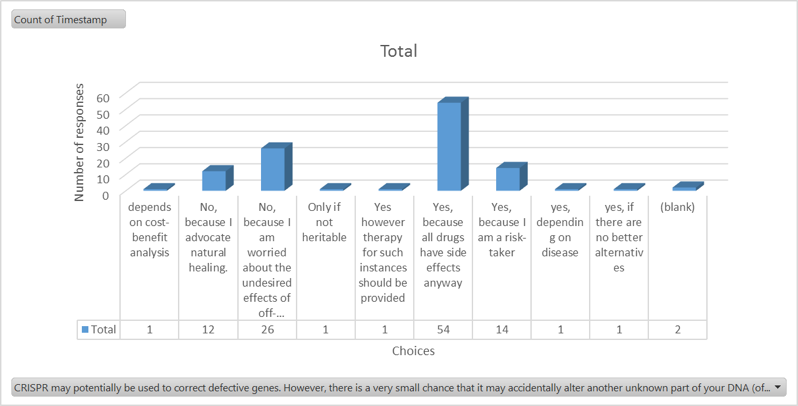 Because the public has raised concerns on the issues of off-targets and low efficiency, we then conducted a question on how they would use the technology if it is fully developed, meaning the off-target and low efficiency issues have been solved. It was indicated that 88 participants would like to take the treatment if it is fully developed, which is 26% more than the responses from our last survey, suggesting that future improvement on efficiency does convince the public to accept the new technology. 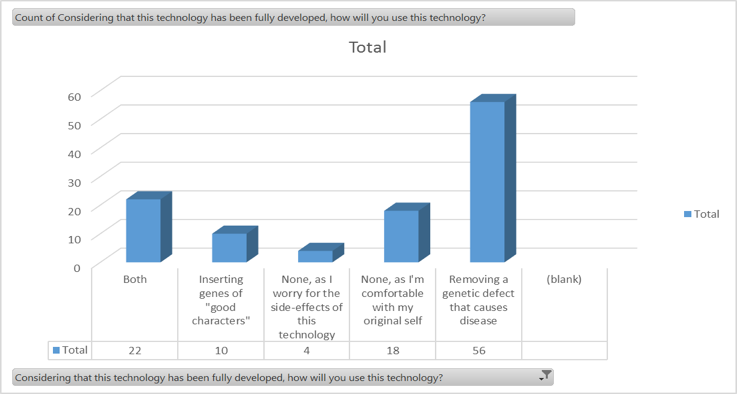 d. Which obstacle do you think should be addressed with the highest priority before being applied in humans for gene therapy?

From question b to question c, we have observed that there is an attitude shift from having concerns on CRIPSR therapy towards a larger acceptance of the new therapy. And we would like to validate if it is the risk problem that concerns the participants. According to the responses collected from this question, it was coherent with our hypothesis that the risks that come with DNA editing are indeed the utmost concern of the people. (62% of the responses) 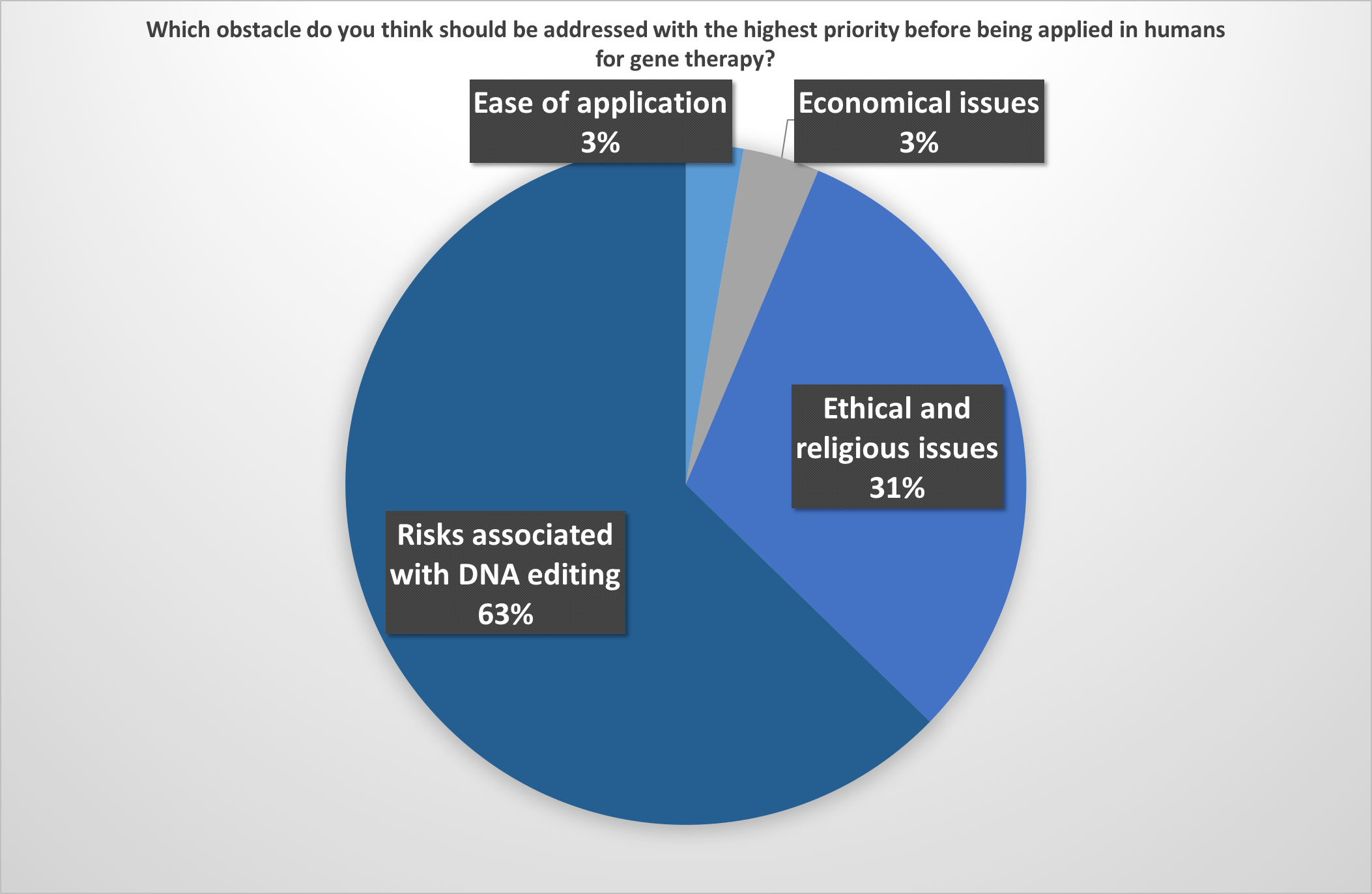 3. Public attitude towards ethical issues and controversies of CRISPR-Cas9

Since we have also noticed people having doubts on the ethical issues that come along with the genome editing technology, we also asked their thoughts on the potential regulations and government policies on the application of CRISPR. It turned out that most people (86 out of 110) have agreed that there should be certain regulations to limit the abuse of this technology. Moreover, when they were asked about how they government should approach to the technology, most of them (66 out of 110) advocated the research and development of CRISPR but with stringent regulations. 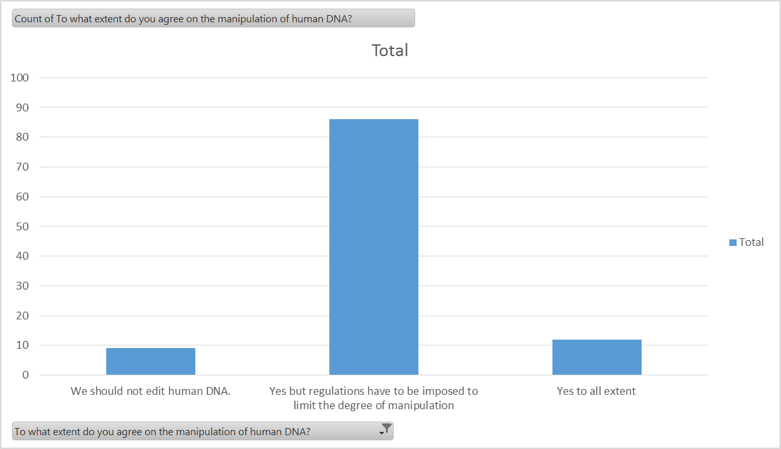 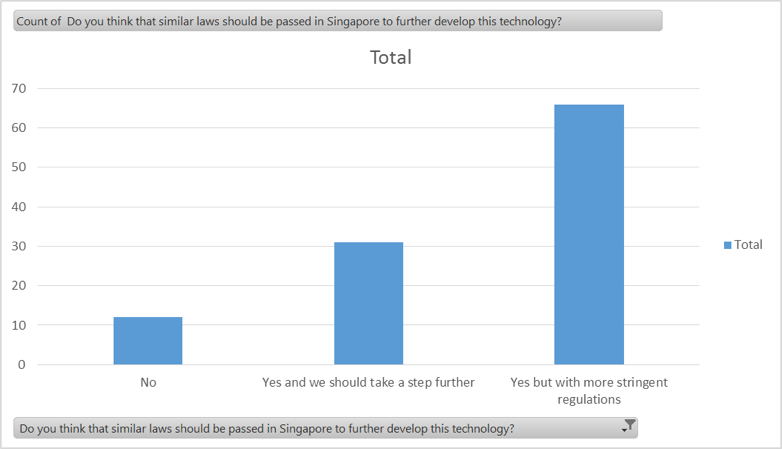 With a series of questions being asked and the responses of the public being analysed, we have wrapped up into three conclusions from the survey results.

1. Our exhibition booth does help the public understand the awareness of genome editing and their knowledge on synthetic biology. However, there is still a lot of people outside the science field who are unfamiliar with the modern technological development in biology discipline, and we believe by hosting scientific events like this exhibition booth, we can reach out to more people and share the knowledge that might be potentially beneficial to them.

2. Gene alteration is a controversial issue and it must reach a consensus from the public that it is accepted by the majority of people before applying it for any therapeutic usage. Therefore, most of people from the survey are willing to see scientific progress in the development of CRIPSR technology but hold conservative opinions in terms of legalization and demand for more stringent regulations of the application.

3. Lastly, we observed that there is a mind shift of whether to accept the treatment using CRIPSR and the reason that causes the change is that people are concerned about the inefficiency and side effects of the method when they know that the technology has not been completely developed yet. Therefore, we decided to integrate the public opinions into our research which initially focuses on evaluation and measurement of Cas9 variants only. But now we plan to develop on current Cas9 systems and figure we could optimise the system with better efficiency. Check out here for our newly developed project that integrates our survey results and aim to solve the low efficiency problem.