As a team under measurement track, we are delighted to participate in the Interlab Measurement Study. The objective of this study is to measure fluorescence data for three GFP-expressing plasmid devices and by collecting all the data gathered from the participated iGEM teams all over the world, we are able to assess the precision and reproducibility of the results from different labs.

The three constructs are differentiated by their promoters and all the rest of the parts are the same. Hence, we would be able to determine the differences in terms of the strength of these promoters. The three promoters, namely J23101, J23106, J23117, were cloned into pSB1C3 vector and submitted by iGEM Team Berkley in 2006. Compared to the Interlab Study performed in the previous years, two controls both positive (I20270) and negative (R0040) have also been added into the measurement test, used as reference devices.

Standardization of fluorescence curve: The standardization curve was plotted by recording fluorescence data of FITC at different concentrations. The FITC solvent was prepared from the FITC stock by mixing with 1xPBS and incubated at 42ºC for 4 hours. The prepared solution was then diluted by 10 fold for 11 rounds and the procedure was repeated for 4 replicates as well. 48 samples in total were added into the plate reader for fluorescence measurement.

Cell culture measurement: Five plasmids (with J23101, J23106, J23117, I20270, R0040 as promoters) were transformed into DH5α E.coli and two colonies were picked and inoculated at 37ºC for 18 hours at 220rpm. Before the inoculation, we have purified the plasmids from each sample and sent the extracted plasmids for sequencing to confirm the correct colonies were picked. However, we did not find out any colonies with correct sequence for Device 3, after multiple gene sequencing for 10 colonies. We postulated that the device 3 being sent might be faulty and so we requested a new device sample from iGEM headquarter. The new device worked very well and we have successfully picked the correct colonies.

The colonies grown in the plates are illuminated by Blue Light Transilluminator as shown in Figure 1.

Figure 1. From left to right at the top: Device 3, Device 2, Device 3. The device shown at the bottom is the positive control.

We followed the transformation protocol recommended by iGEM website.

The overnight cultures were subcultured in 10mL LB medium with Chloramphenicol for 6 hours. The fluorescence data of each sample was obtained using plate reader and recorded hourly.

Check the full protocol at iGEM webiste. (Note: This is the updated version of the protocol. Because we have finished the Interlab study experiments in the early July, we followed the protocol of the previous version instead of the latest one.) 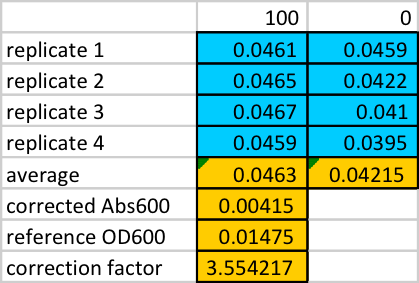 
FI represents the fluorescence intensity and absorbance 600 represents the density of bacterial culture. Therefore, FI/Abs600 is used to assess the strength of the GFP expression. 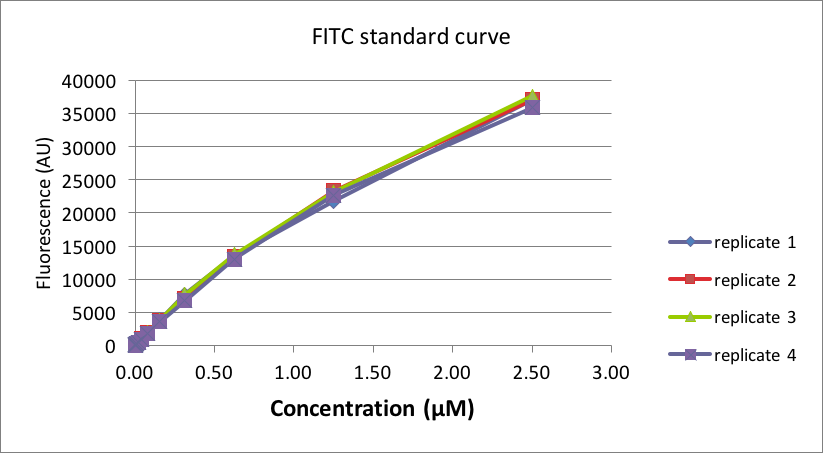 Figure 4. FITC standard curve plotted from the data of 12 dilutions of concentration of 4 replicates 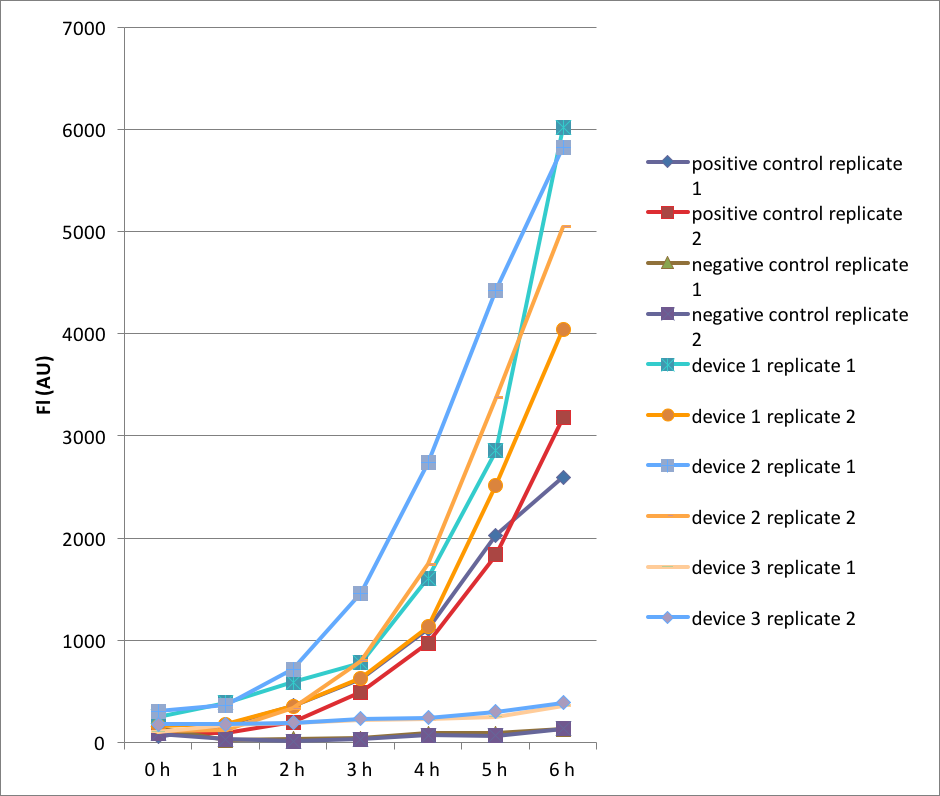 Figure 5. Flouresence intensity plot (FI) of 5 devices and each with 2 replicates from 0-6h. From the plot, we could see that the GFP expression of the first two devices are much higher than the rest. 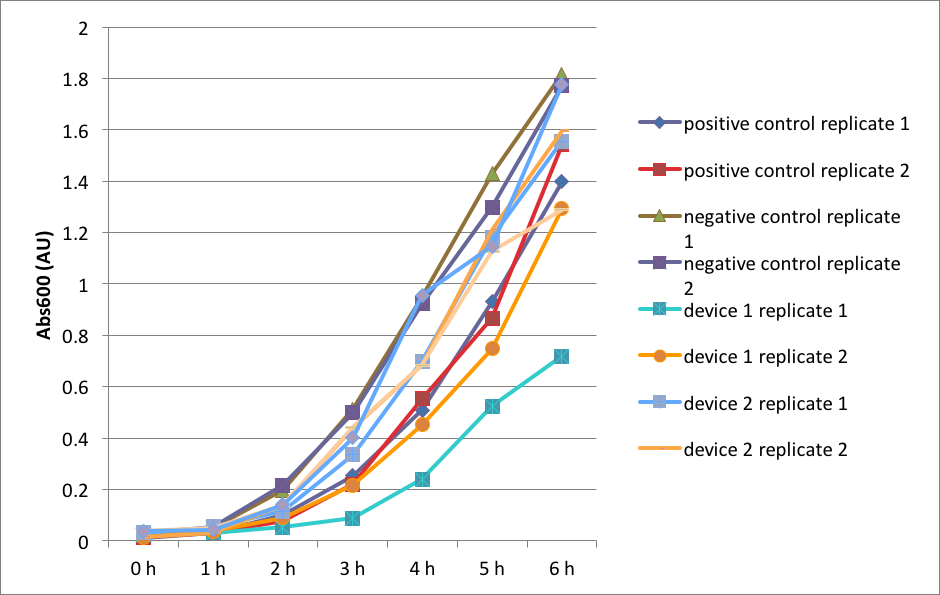 Figure 6. Absorbance at 600nm of the 5 devices from two replicates. All the cell culture have similar growth trend except for device 1 replicate. We speculate that it might be due to the high level of GFP expression slows down the growth. 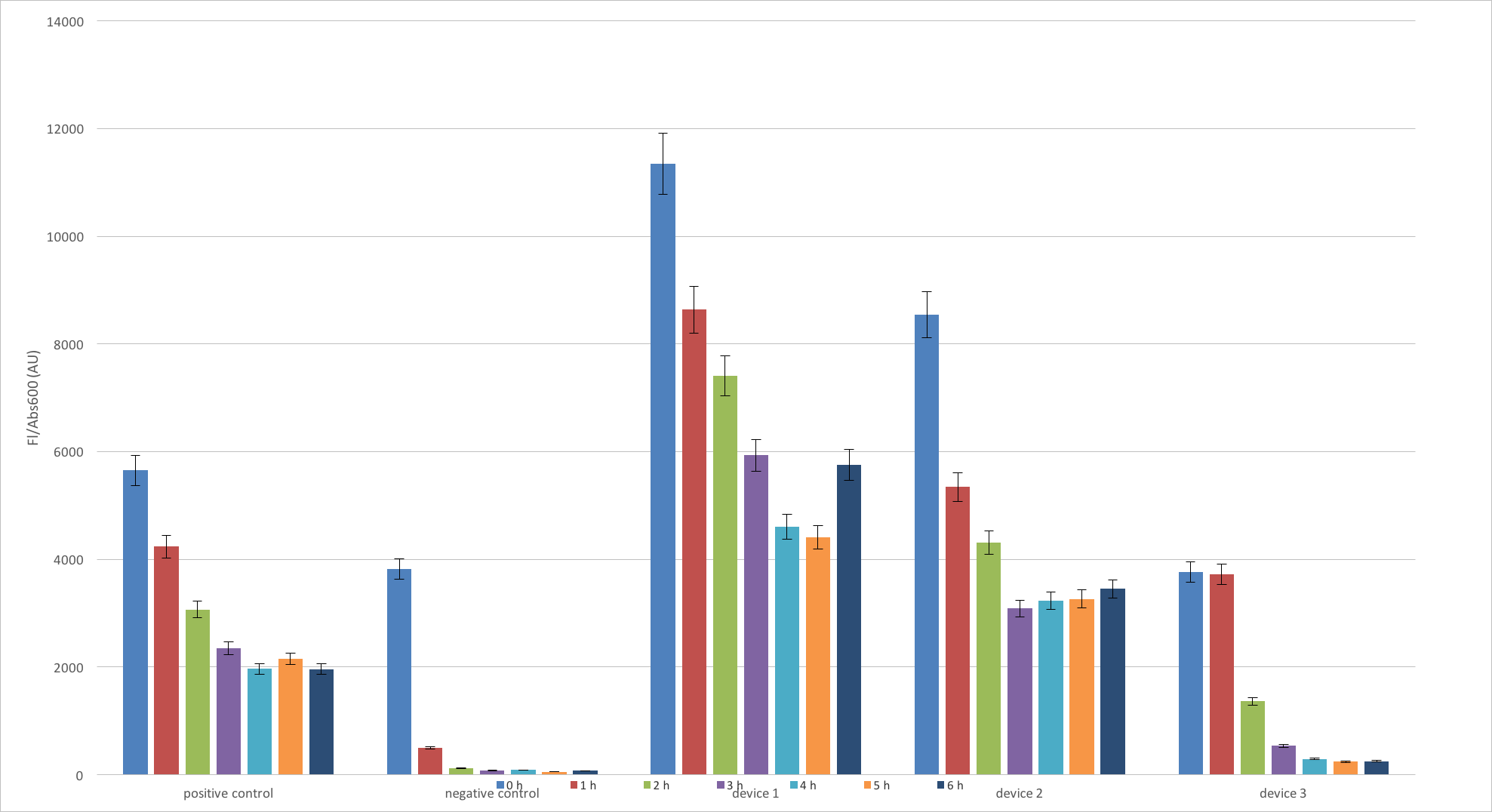 Figure 7. FI/Abs ratio of the replicates and devices from 0-6h. Device 1 has the highest level in terms of Floresence expression and Device 3 has the lowest among the 3 devices being tested. (Note: The error bar is different from the Excel file we have submitted because there is an error in the Excel template that has been provided in the website. And this plot is the corrected one.)


From the plots above, we could see that Device 1 has the strongest FI and highest GFP expression, followed by device 2 which has similar data close to the positive control. Furthermore, Device 3 has the lowest GFP expression and therefore it has the weakest promoter. In summary, we conclude that the promoter strength of the three constructs: Device 1> Device 2> Device 3.