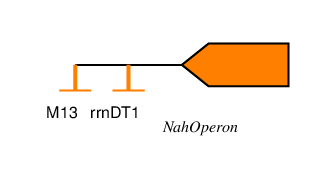 This part contains the Nah Upper Operon from Pseudomonas putida which produces a series of enzymes that degrade Naphthalene into Salicylate. NahA1-NahA4 form the enzyme complex 1,2-Napthalene dioxygenase. The other 5 genes each code for a single enzyme.

Our project is all about detecting small amounts of an aromatic compound called 1-Mehtylnapthalene (1-MN). While our “Detector” can’t detect that compound, it can detect 3-methylsalicylate (3-MS) which is produced when our “Degrader” part’s enzymes act on 1-MN.

The operon comes from the NAH7 Pseudomonas putida plasmid. When trying to find a way to detect 1-MN we came across the Naphthalene degradation pathway. We thought, if we can’t detect 1-MN, can we detect anything along the pathway?

Based on the Peking 2013 iGEM team’s Part:BBa_K1031610. NahR is a transcription factor that binds to a specific sequence upstream of the Psal promoter. Psal is then induced by the addition of salicylate like compounds. Our version of NahR has a single amino acid change at position 248 from Arginine to Histidine, this change causes the induction of Psal by NahR to become more sensitive to Salicylate.

Our project is all about detecting small amounts of an aromatic compound called 1-Mehtylnapthalene (1-MN). While our “Detector” isn’t detecting that compound, it is detecting 3-methylsalicylate (3-MS) which is produced when our “Degrader” part’s enzymes work on 1-MN. Once our “Detector” turns on Psal, another part the “Color Reporter” lets us know.

The mutant NahR came from a paper (10.1016/j.jbiotec.2010.09.936) comparing the inducibility of Psal using various NahR mutants. NahR_R248H seemed to show the highest output while still being only inducible by salicylate compounds. 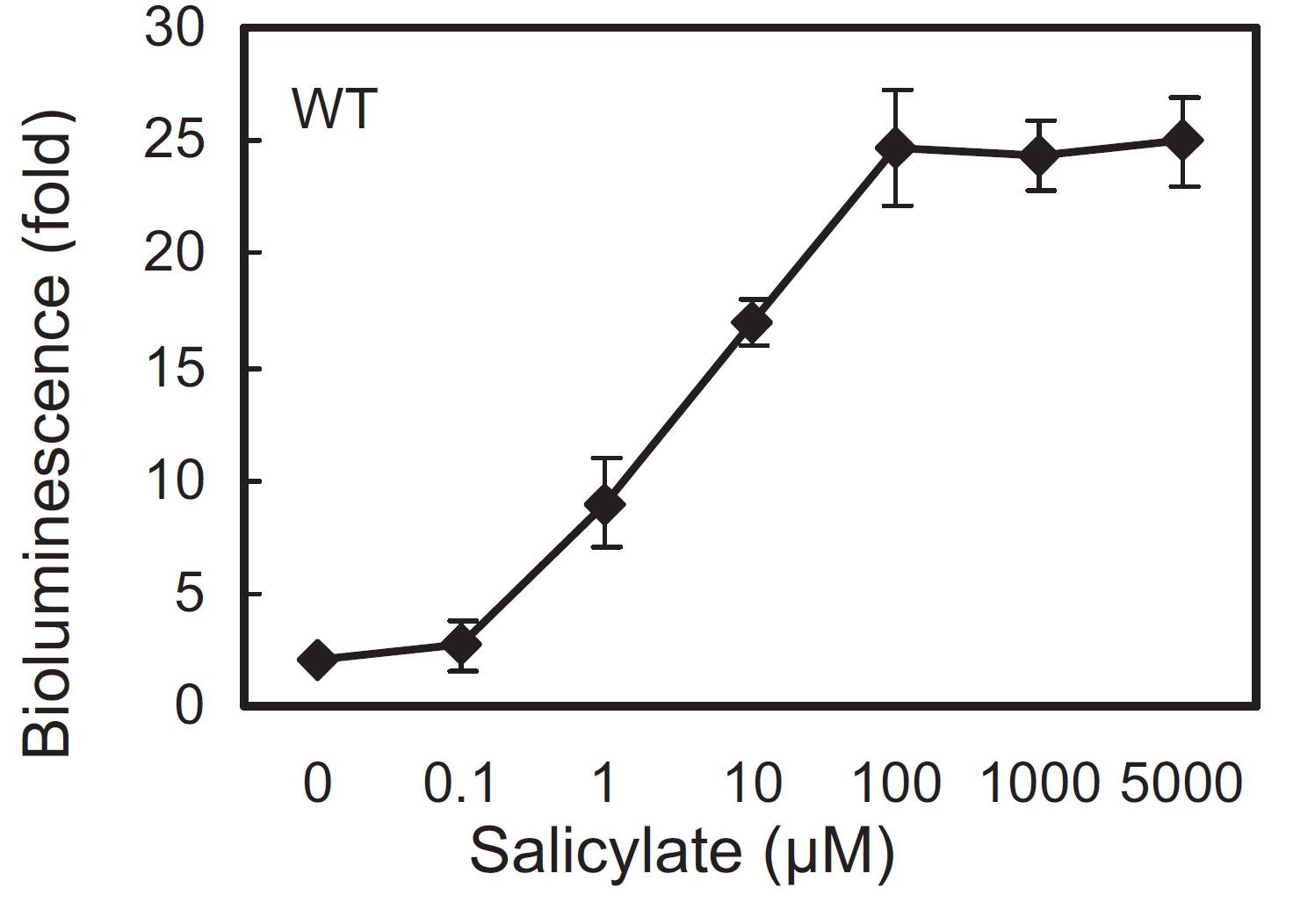 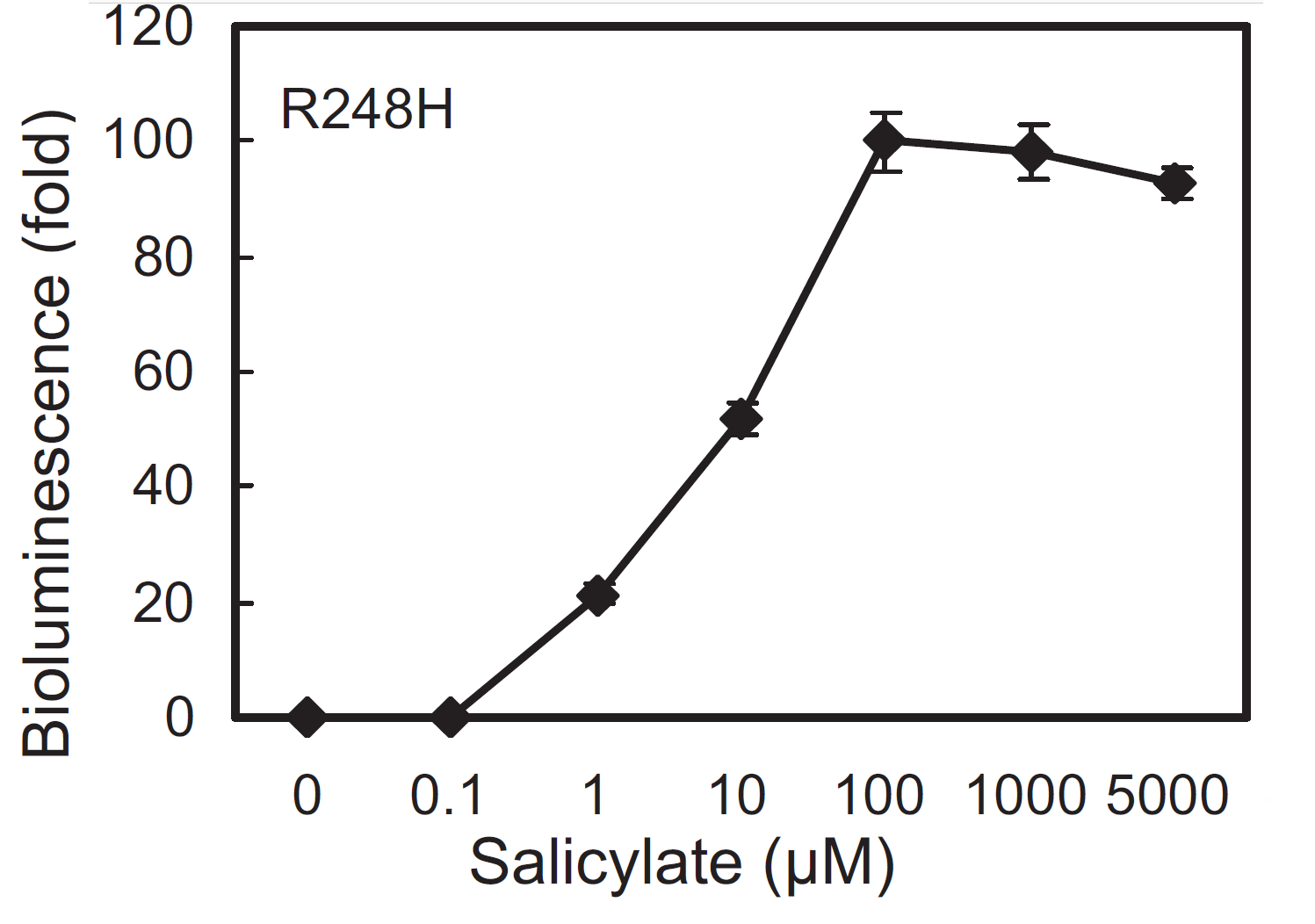 More NahR mutants! The WT NahR and the mutant version we are using in our “Detector” part requires Salicylate to fully induce Psal. This version can induce Psal without salicylate.

It is used as a positive feedback loop. In our system, we’ve placed this part just downstream of Psal. So, once Psal gets turned on, even if only for a second by a tiny amount of 3-MS, the feedback kicks on, binds upstream of Psal and now Psal is on even if no more 3-MS is present.

One of our goals with this project was to be able to report very small amounts of 1-MN present on the breath of an individual. We also wanted the indicator to be read without sensitive equipment. Therefore, we needed a strong output using a very low input. With the feedback loop, the input only needs to activate Psal once and NahR_L154F makes more of itself and the reporter downstream. We’ve put two sets of NahR_L154F in this part because our salicylate dependent NahR is still being produced. We thought doubling the concentration of this version would ensure it is the one binding upstream of Psal. 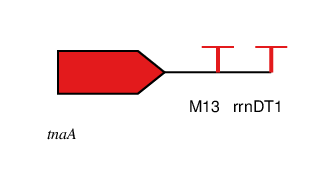 This is the tryptophanase gene from E. coli!

One of the “Degrader” enzymes 1,2 -Naphthalene dioxygenase catalyzes the conversion of indole to indigo dye. Indole is produced when tryptophanase acts upon L-Tryptophan. We use a strain of E. coli with a nonfunctional tnaA gene, so when our color reporter is activated

When looking at “Degrader” enzymes we came across the reaction involving indole to indigo dye. We liked using Indigo dye because it is insoluble, if the cells dye or time passes, the results remain.

This is the whole device as it would be placed into PSB1A3. The device must be put into an ampicillin selection plasmid because the tryptophanase deficient chassis of E. coli we will be using already has chloramphenicol resistance markers.

Huang, J. Z., and M. A. Schell. "In vivo interactions of the NahR transcriptional activator with its target sequences. Inducer-mediated changes resulting in transcription activation." Journal of Biological Chemistry 266.17 (1991): 10830-10838.