We engineer our bacteria to generate Penicillin Binding Protein 5-Green fluorescence Protein (PBP5-GFP), and bind penicillin to the coated wells on the ELISA plate. The protein is added to the sample, where the penicillin in the sample compete for PBP5-GFP with those on the plate, and the fluorescence intensity in the sample is measured and reflects its penicillin concentration.

We design a part that generates Penicillin Binding Protein 5-Green Fluorescence Protein (PBP5-GFP), and bind penicillin to the coated wells on the ELISA PLATE. The protein is added to the sample, where the penicillin in the sample compete to bind with PBP5-GFP with those on the plate. So we measure the fluorescence generated by the PBP5-GFP in the liquid, which indicates the concentration of penicillin. With more penicillin present, more PBP5 binds to them, and greater fluorescence intensity will be measured. (See protein purification protocol) 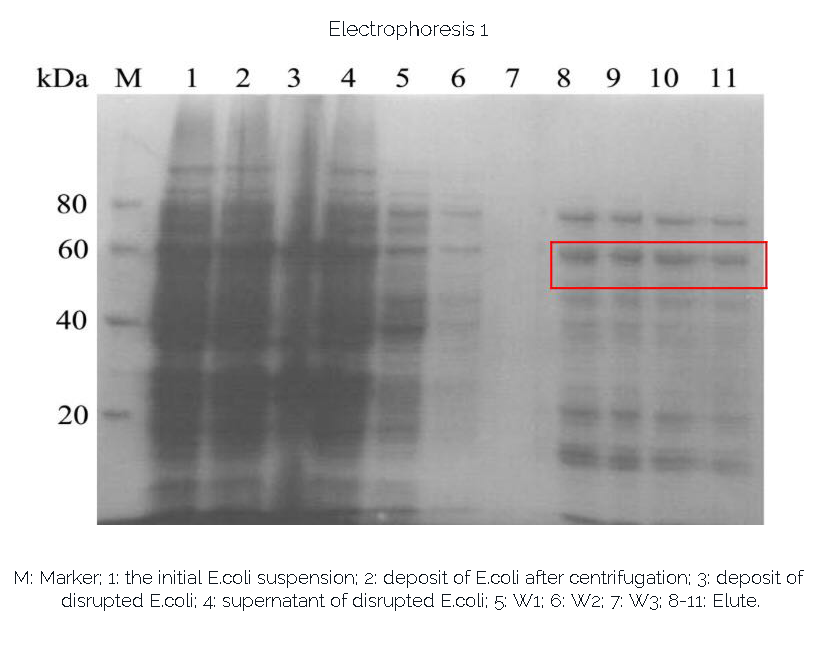 The PBP-GFP was purified through Ni-chelating affinity chromatography. The target protein, PBP-GFP, is marked in the red box, has a molecular weight of 60kDa. As demonstrated in channel 1-4, protein is identified at the position of 60kDa, PBP-GFP is expressed in the E.coli; as demonstrated in channel 8-11 that the target protein is found in all 4 elutes, we have successfully purified PBP-GFP from the E.coli. 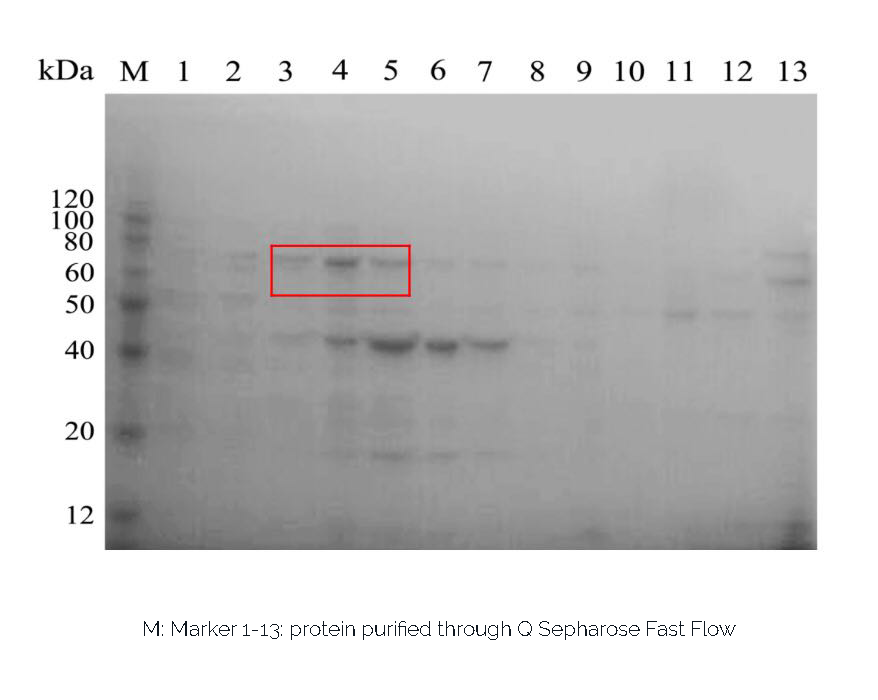 The target protein from channel 8-11 of electrophoresis figure 1 was purified through Q Sepharose Fast Flow. Proteins in well 3-5 have clear marks at 60kDa, indicating our construction can express the GFP-PBP we desire.

We conduct three different competitive binding experiments: the first two experiments enable us to determine one proper condition under which PBP works the best. And we use preprocessed milk sample in the third experiment, proving that our method can work under real life condition. The details and data are provided below.

In the first competitive binding experiment, we compare the result of applying different concentrations of penicillin. By calculating the correlation of each experiment, we discovered that 25 times diluted PBP-GFP5) leads to data with highest relativity. (See more in protocol) 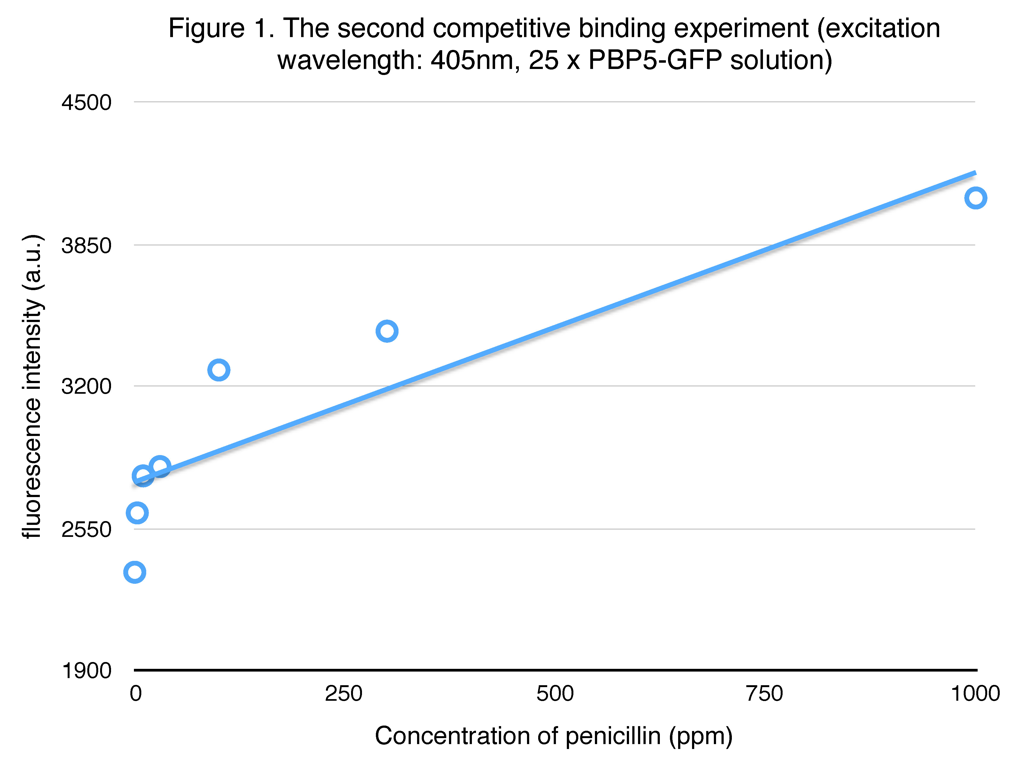 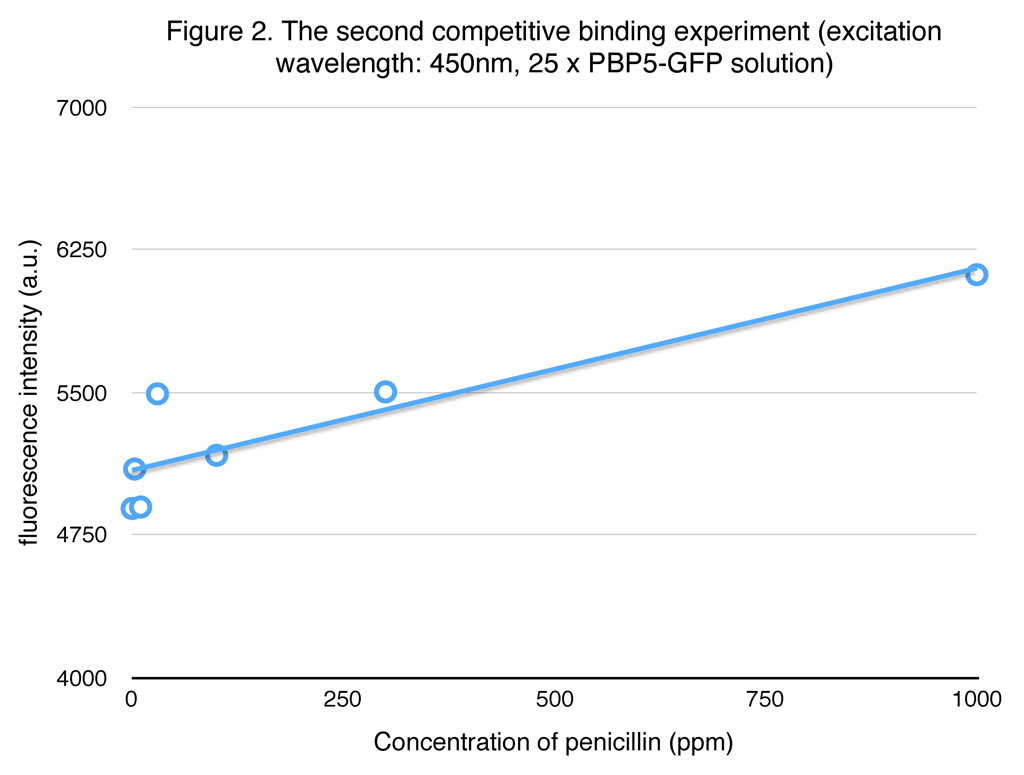 The second experiment is conducted under the condition of 25 times diluted PBP5-GFP solution. By analyzing the data and applying the Pearson correlation coefficient, we are able to determine the excitation wavelength that ensure the highest relativity is be 405nm. (See more in protocol)

The preprocessing of milk: 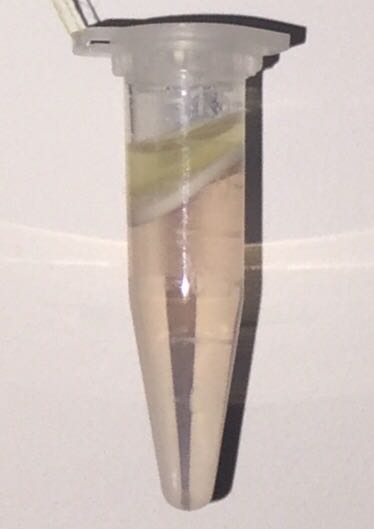 We add milk sample into the centrifuge tube and add the equal amount of tris-saturated phenol into the milk. Then we add four times volume of chloroform into the mixture, and centrifuge the tube at 10000rpm for 5 min. (See Protocol) The result of the preprocessing was showed in the picture above. 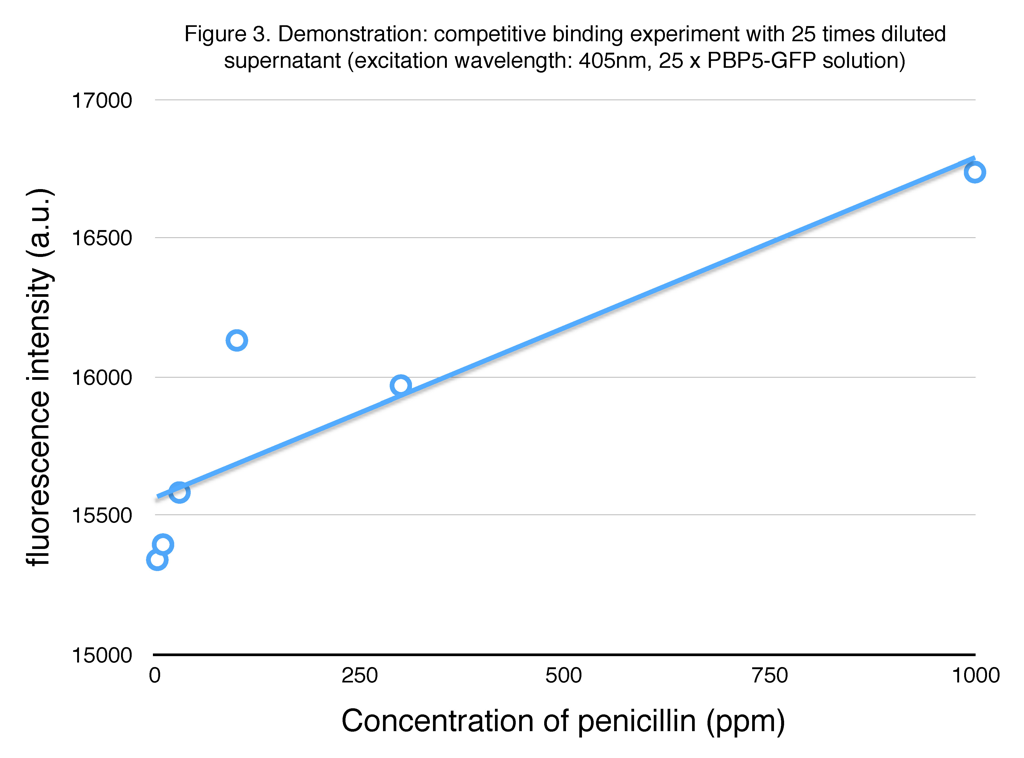 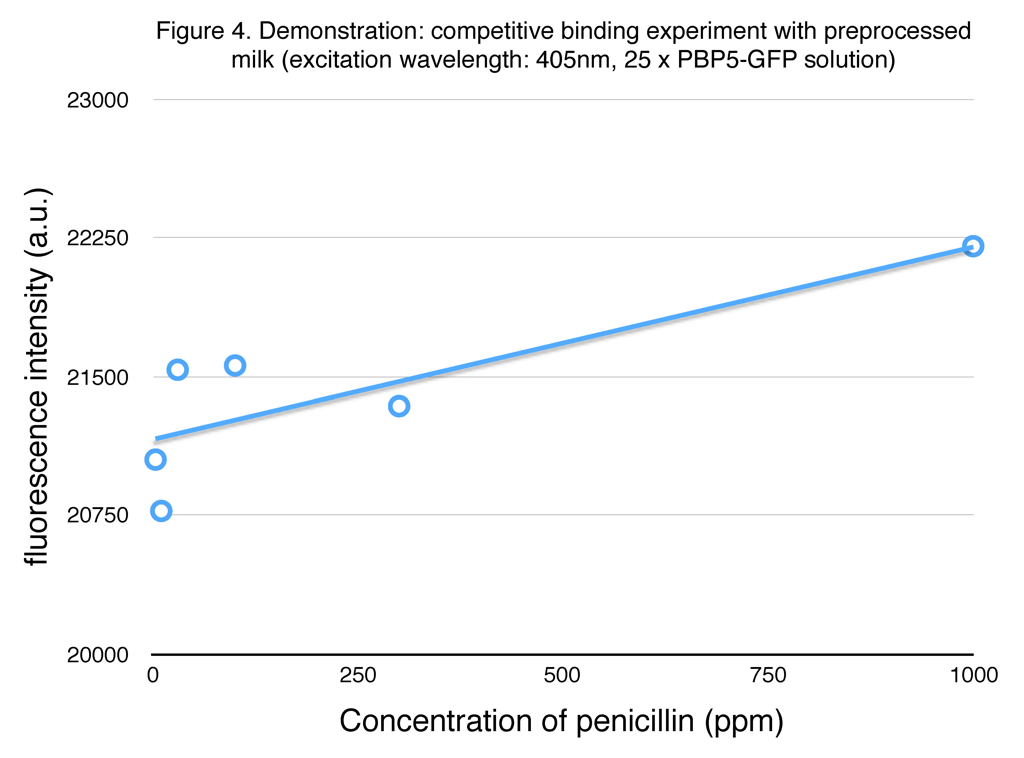 The last competitive binding experiment is conducted under the condition of 25 times diluted PBP5-GFP solution and preprocessed milk (containing PBP-GFP) and 405nm excitation wavelength (See more in protocol). The results indicate that the fluorescence intensity measured and penicillin concentration has a correlation factor of 0.8212211, which means the two factors is strong correlation, proving that our method doesn’t just work under the most simplified conditions and has the ability to detect penicillin in milk samples.

The above experiments require the use of fluorescence spectrophotometer, a common lab equipment that can emit excitation light at different wavelengths. Based on the information we gathered from Human Practice, we understand that our approach would bring out the best outcome if we make it as cheap and accessible as possible. But measuring green fluorescence only needs a certain excitation wavelength, and our previous experiments show that the data with the strongest correlation factor is obtained when the excitation wavelength is 405nm. So we want to simplify the fluorescence spectrophotometer required to run the test and make it more cost-effective and more portable. 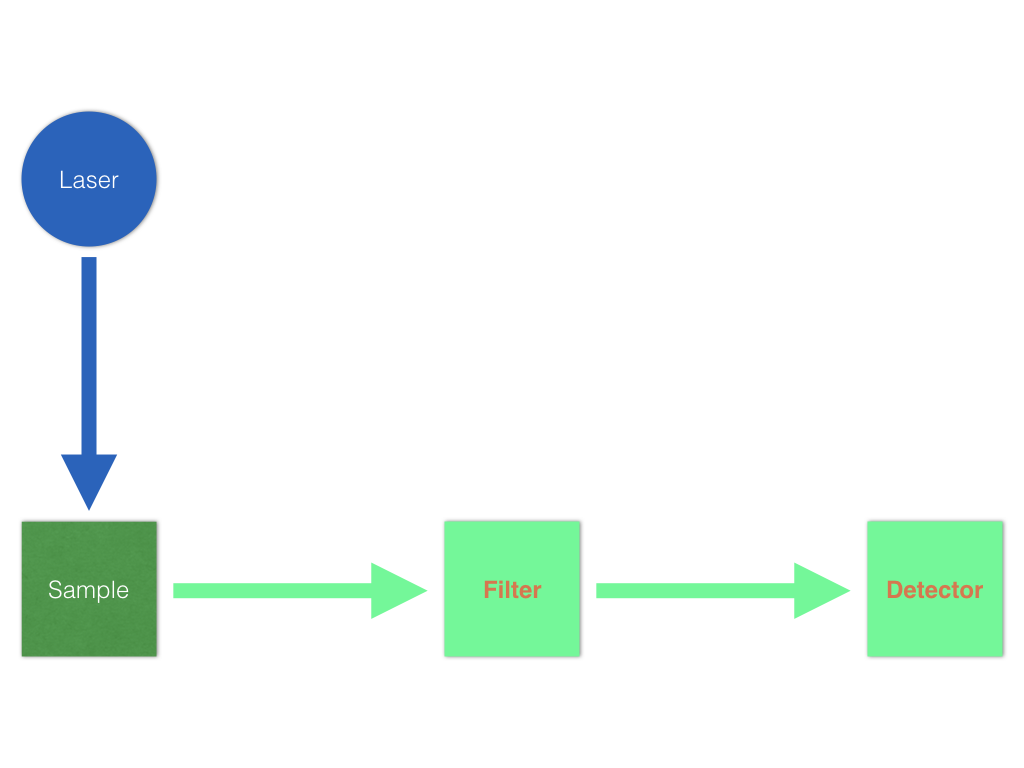 PBP5 causes the hydrolysis of tripeptide Lys-Ala-Ala(KAA) when active and not bound with penicillin, releasing one alanine and exposing one amino group.[3] We measure its hydrolysis by the amino group, which changes the color of KAISER, a substance that reacts with free amino acids to yield CO2, NH3, and an aldehyde, the NH3 further yielding a colored product (diketohydrindylidene-diketohydrindamine, a bi-indanedione derivative also called Ruhemann purple), yielding the color purple. With more penicillin present, more PBP5 becomes inactive, and the purple gets lighter.

Many poplypetides with a d-ala-d-ala end can be the substrate for PBP5, diacetyl-L-LysD-Ala-D-Ala (Ac2-L-Lys-D-Ala-D-Ala, Ac2-KAA) is the common substrate used to detect PBP5’s activity[2]. The PBP5 causes Ac2-KAA to hydrolyze, releasing one alanine and exposing one amino group. If bound with penicillin, PBP5 loses activity. And the protein is very sensitive to the penicillin in the liquid, so this mechanism is applicable as we try to determine the amount of penicillin in a low concentration system. the amino group, which turns Kaiser blue.

We mix 5 times diluted supernatant of the bacteria (treated with French pressure cell press and centrifugation at 12000rpm for 5min), with 100 times diluted Ac2-KAA. The mixture is equally devided into 8 centrifuge tubes, and different concentrations of penicillin (indicated below) are added. By applying the KAISER test, we were able to detect the amount of penicillin in each sample. (See protocol) 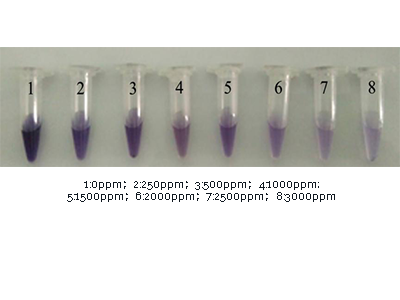 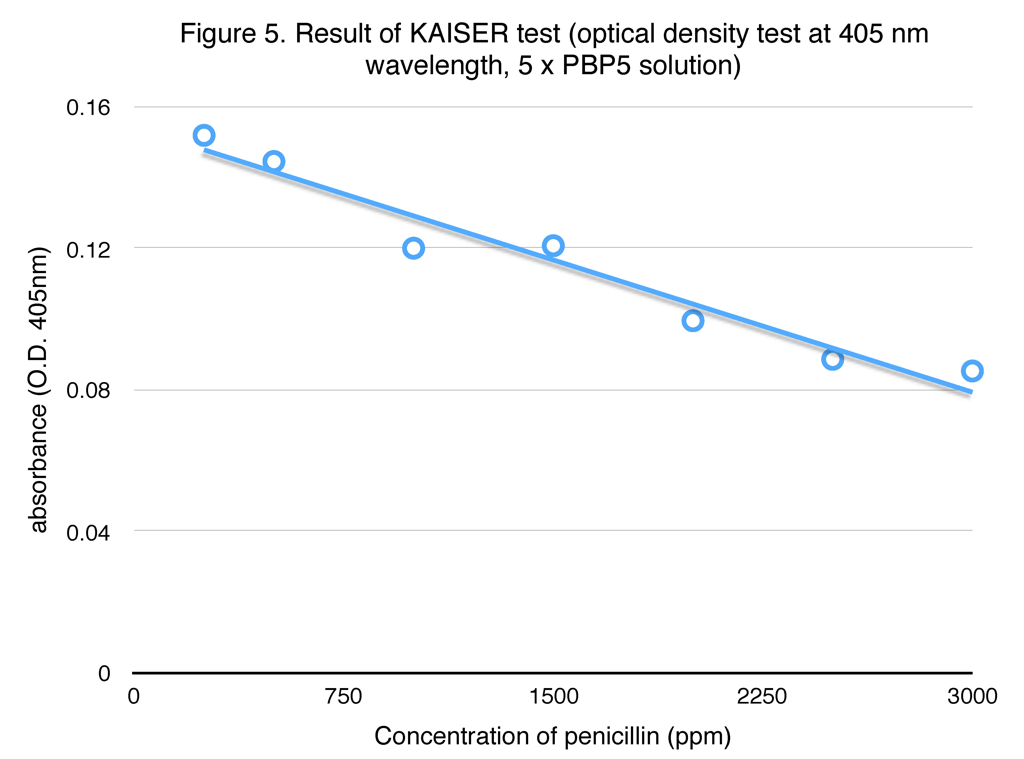 
According to the graph above, the horizontal axis represents the number of the sample and the vertical axis shows the optical density of each sample. By applying Pearson correlation coefficient, the result is 0.931032451, which means the two factors have strong correlation. As the concentration of penicillin increased, the value of optical density decreased, which proves the validity of our approach.


In order to apply the Ac2-KAA and KAISER test to milk samples, we need to reduce the interference of the amino groups on milk proteins. We designed a part that generates PBP5-CBD (Cellulose Binding Protein) to bind PBP5 onto the nano-cellulose fiber aerogel.[5] We plan to use the aerogel to collect the proteins added in the sample, and conduct the KAISER test with the rinsed aerogel and Ac2-KAA solution. 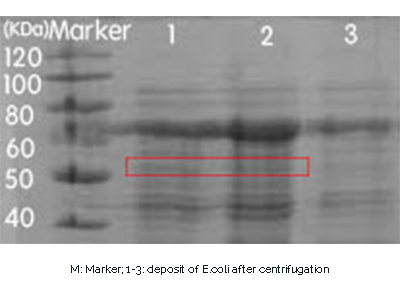 The CBD-PBP5 protein(red box) is expressed, with a molecular weight of 53kDa. E.coli in channel 3 is a blank comparison. 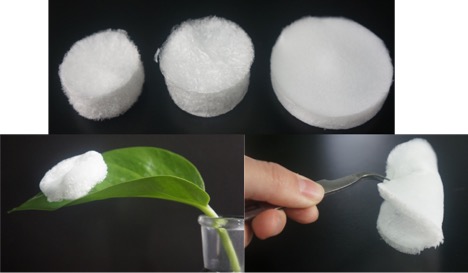 With the nano-cellulose fiber aerogel prepared and the CBD-PBP5 protein harvested, we plan to take advantage of the aerogel’s excellent absorption and use it to collect CBD-PBP5 proteins after they are added to the sample. Then we plan to add the aerogel into the Ac2-KAA solution, so that the remaining active PBP5 on the aerogel can cause Ac2-KAA’s hydrolysis, and KAISER test can be done with the solution after the reaction. We anticipate that without the interference of amino groups on milk proteins, it is possible that the KAISER test can be performed on milk samples and be utilized in real life.