Given that our integrative system has been proved to produce hydrogen with great stability and repeatability and its intrinsic characteristics for scalable production, we think our project is a successful applied design. Here, we summarize the qualification and merits of our design in the following figure. In addition, biofilm-interfaced Nanorods has the potential for easy recycling and is cheap for production, thus presenting an innovative and interesting example towards industrial-oriented artificial photosynthesis system. 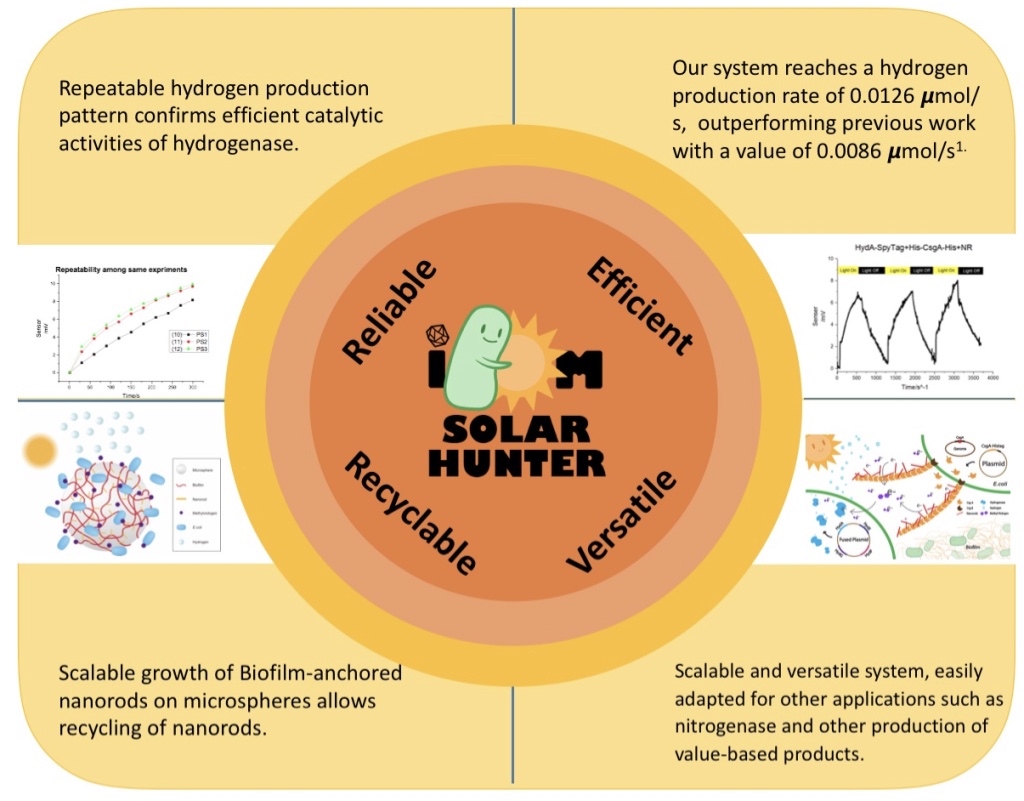 We aimed to design a biofilm-interfaced artificial hydrogen-producing system, Solar Hunter, that harnesses the energy of sun light. Biofilm-anchored nanorods can efficiently convert photons to electrons, which seamlessly tap into the electron chain of engineered strain carrying FeFe hydrogenase gene cluster, thereby achieving high-efficiency hydrogen production. It is noteworthy that our system facilitates the recycling of the expensive nanorods as the biofilms were grown on easy-separation micro-beads to anchored NRs. This section demonstrates the hydrogen production by integrating biofilm-anchored NRs with strain harboring hydrogenase gene clusters. Specifically, it shows that 1) the system shows high efficiency. 2) the system has some potentials that can be exploited in the future.

The biofilm, whose subunit was CsgA engineered with HisTag on N-termial and SpyCachter-HisTag on C-terminal, was grown on microspheres, 25 micrometers in diameter for 48 hours. NR’s (7.72*10^-9 M) were then added and given 30 min to bind to the HisTag on CsgA subunit. (The engineered SpyCatcher was used for possible pure hydrogenase binding, our alternative proposal.) The solution was centrifuged and the sediments contained biofilm beads covered with NR. This sediment was resuspended in PBS and was added to the reaction solution consisting of E. coli with engineered hydrogenase (wet weight 100ug) resuspended in PBS, 150Mm NaCl, 100mM VitaminC, and mediator solution (5mM Paraquat dichloride, for mediating the electrons across the cell membrane). The whole solution including bacteria is adjusted to pH=4 by 100mM Tris-HCl(pH=7.0), given that the pH of 4 was reported to be an optimal environment. [1] Prior to the assay, the E. coli was induced with IPTG overnight at room temperature. In the activity assay of the hydrogenase in producing hydrogen, the system goes through three periods of “light-on and light-off”. The result (see below) shows the stability of the system and the reversible catalytic activity of the hydrogenase of the reaction, 2H+ + 2e- ⇿ H2 . 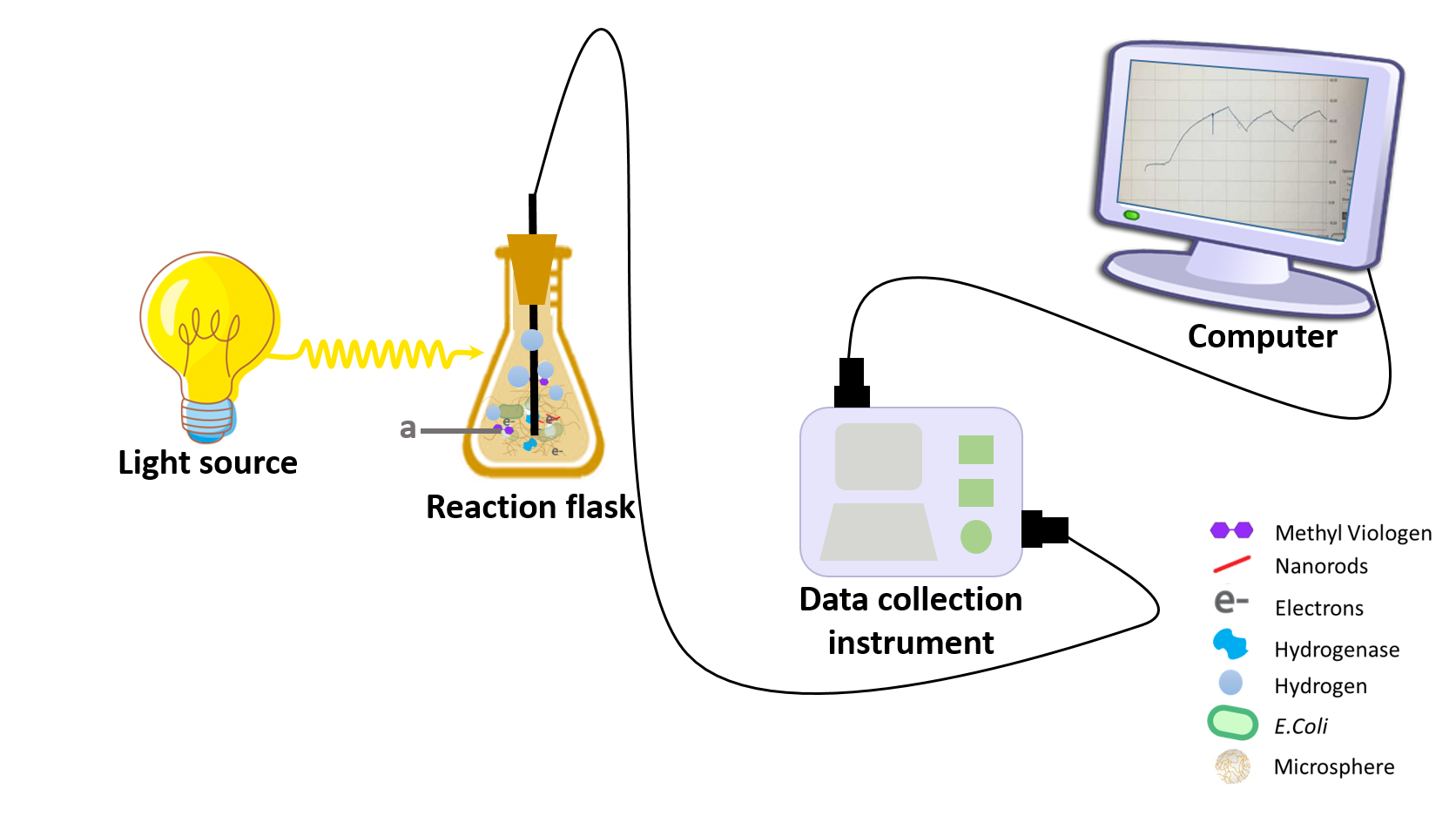 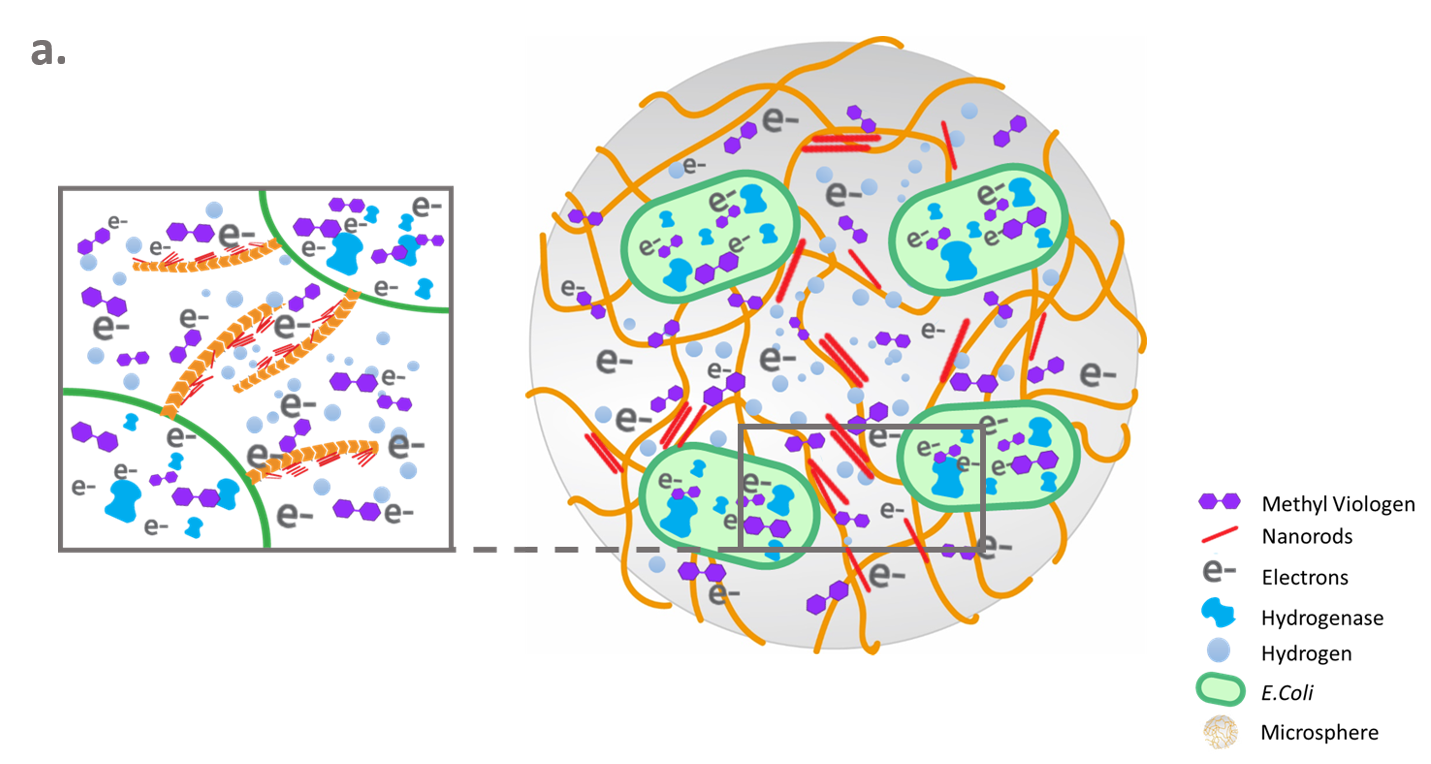 It contains (1) an anaerobic reaction container which is a transparent circular cuvette that allows light to go through; (2) a light source in our hydrogen production assay acting as a substitute for the real sun. (We chose a high-power white LED light, set 28cm away from the reaction container for a even distribution of photons); (3) a hydrogen electrode linked to its inner sensor inserted into the reaction container to measure the realtime concentration of hydrogen; (4) a data hub; (5) a computer connected to the hub to record the data and generate the curve of concentration variation within a period of time. 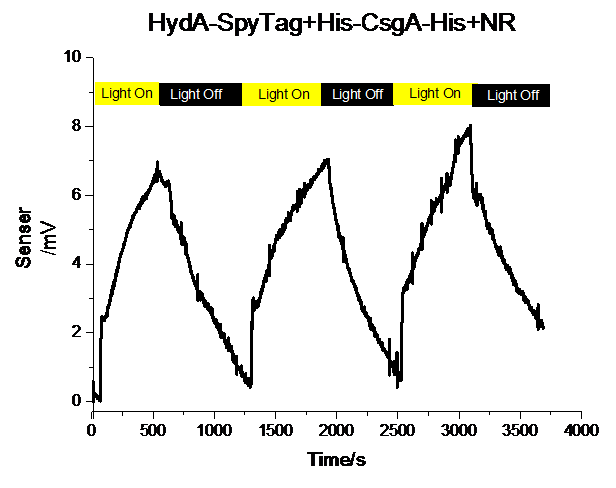 During the period with lighting, the hydrogen production increases, until we shut off the light at points that correspond to the tips. The curve then goes downward, showing that the hydrogen concentration is lowered, an evidence of the bidirectional catalytic activity of hydrogenase. It is noteworthy that the hydrogenase shows the greatest production rate at the beginning of lighting: a transient sharp rise can be observed at the valleys. It is also obvious that each period of “light-on light-off” gives similar curves, which implies that our hydrogenase is stable. In our experiment, we find that despite the reported affected catalytic ability of FeFe hydrogenase due to oxygen, non-strict anaerobic and short-term exposure to oxygen does not cause detrimental effects on the enzyme activity of producing hydrogen. This can be explained by the high catalytic ability and the segregation layer from the atmosphere provided by the hydrogen it produces. Meanwhile, the electron sacrificial agent VitaminC also adds to the “protection layer” of the hydrogenase in our system. 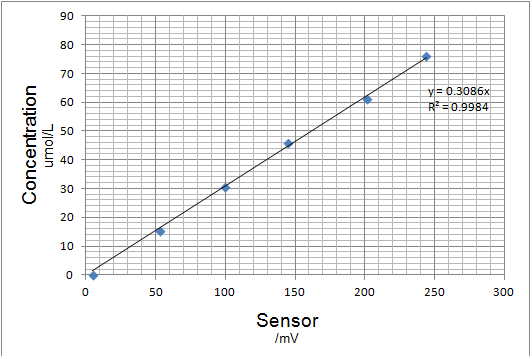 Potential use for wider applications

Our biofilm system included a SpyCatcher system which has the potential for working directly with enzymes on biofilm. This design was not utilized in our hydrogen production so far, but it offers a gate for enzymes to directly react with nanomaterials since the CsgA subunit is engineered with both the Histag and SpyCatcher. This potential use might lead to a boost in efficiency in some nanomaterial-enzymes combinations. The reasoning of the design, and the proof of the functional design is shown below.

We want to attach enzymes to biofilm, so we turn to a widely applied linkage system, SpyTag and SpyCatcher.

Appending SpyTag to CsgA subunit is a traditional and hackneyed approach to modify biofilm posttranscriptionally. Here, we challenge to attach larger part, SpyCatcher, to CsgA to enrich the versatility of biofilm platform. For one thing, we intend to pioneer new approach. For another aspect is that we concern SpyCatcher is too large that might jeopardize the biological activity and function of the enzyme. After comprehensive consideration, we decide to append SpyTag and SpyCatcher respectively to CsgA subunits and enzyme, and successfully prove their feasibility and stability.

As Figure3 illustrated, His-CsgA-SpyCatcher-Histag mutant incubated with mCherry-SpyTag show a clear biofilm-associated mcherry fluorescence signal, which indicating the accurate conformation and function of the SpyTag and SpyCatcher linkage system. The third figure is merged by the first and second figures of each sample are snapped respectively under green laser field with 558 nm wavelength and bright field of fluorescence microscopy, Zeiss Axio Imager Z2. As for controls, strains secreted CsgA–Histag and ΔCsgA both are unable to specifically attach to SpyTag thus no distinct localization highlight of red fluorescence on E. coli. That to a large extent prove the specificity of our desired linkage between SpyTag and SpyCatcher system.

In conclusion, E. coli strains expressing biofilm on microspheres to anchor nanorods and strains expressing hydrogenase work great together for producing hydrogen. The system achieved a fairly good hydrogen production rate compared to a work reported this year, a nearly 50% increase. The intrinsic adherence of biofilms towards various interfaces allows us to grow biofilms on easy-separation micro-beads, therefore facilitating recyclable usage of the biofilm-anchored NRs and endowing this whole system with recyclability. Notably, our hydrogen production has shown great stability compared to previous reports using hydrogenase. Practically speaking, the system comprising E. coli and biofilms are both amenable for scalable operation, rendering itself a great potential for large-scale industrial applications. Such system can also be adapted to other energy-oriented applications by utilizing engineered new strains with a diverse spectrum of enzymes or metabolic pathways. In addition, our SpyCatcher on the CsgA allows the binding of other proteins that may significantly improve our system. The demonstrated efficiency and stability, along with great potential in scalability, recyclability and versatility makes our system an innovative engineering design with potential for industrial application.