Connection to the Integrative Project

Quantum dots (QDs) and nanorods (NRs), as semiconductor nanocrystals, are of fundamental and technical importance. Owing to their extraordinary optical properties and high quantum-yield efficiency, these nanoobjects are often geared towards many energy-relevant applications. In our IGEM project, we conceive to harness those nanoscale objects as solar energy harvester. When firmly anchored onto E. coli biofilms through coordination chemistry, they can be easily recycled together with scalable biofilm coatings when necessary, and meanwhile, still possess the capability to efficiently convert photons into electrons upon light exposure. The aquired electrons would then tap into the electron chains of engineered strain harboring hydrogenase gene cluster, thereby assisting the enzymes to fulfill hydrogen production. 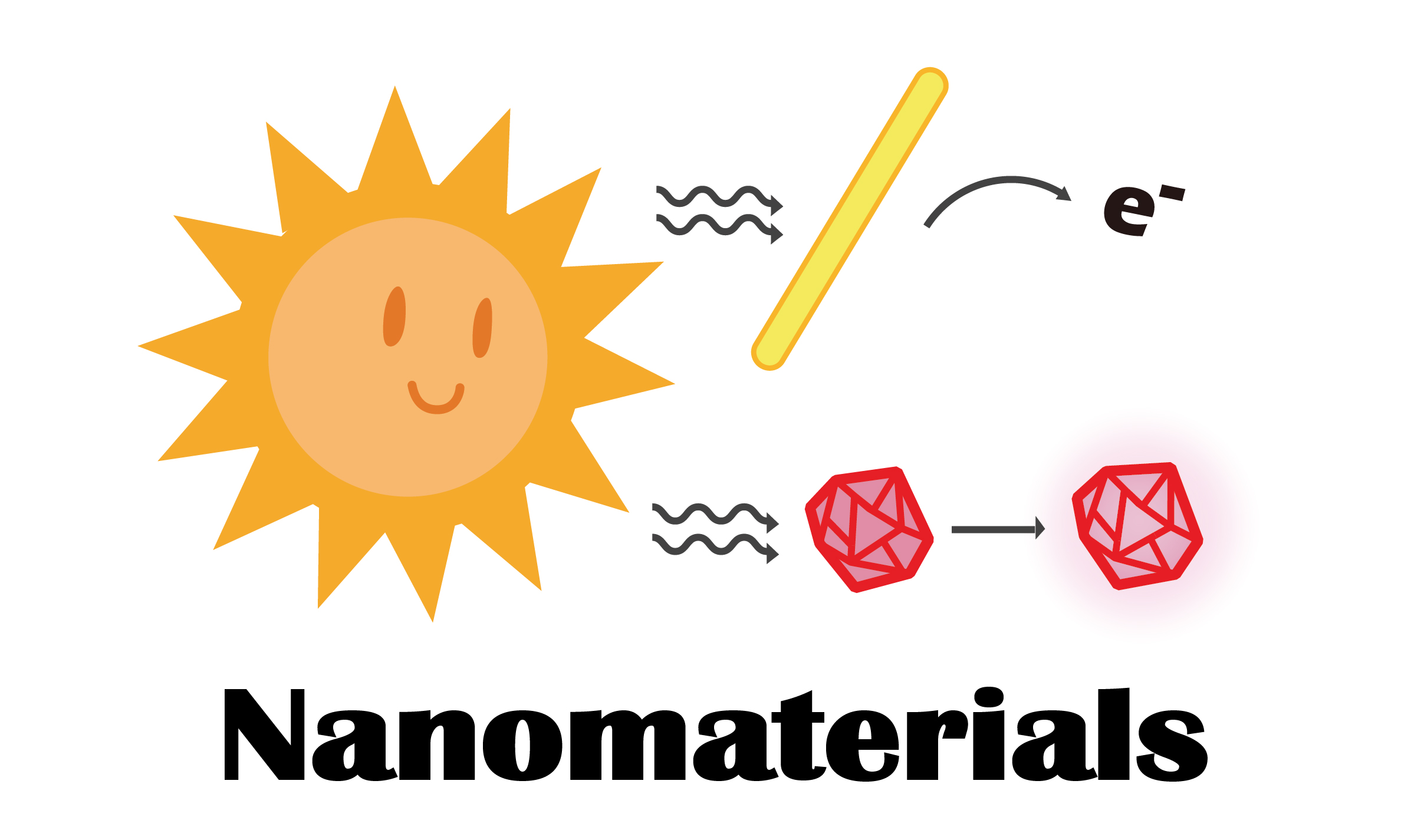 Quantum dots (QDs) and nanorods (NRs) are semiconductor nanocrystals that have been widely studied and believed to be promising for many applications. Their unique electronic and optical properties arising from their unique quantum confinement effect and tunable attributes enable them to become versatile imaging tools and highly effective light harvesters. In our project, we conceive to harness those nanoscale objects as light hunter so that they can convert photons into transferrable electrons in our bio-abiotic hybrid system. In addition, we have utilized QDs as an imaging tool to visualize biofilms formation in our IGEM project.

When shed by light, QDs and NRs would capture photons with high energy, resulting in the excitation of electrons from low energy levels to higher ones. Without mediators, the unstable electrons would perform spontaneous transition to low energy levels. This electron transition would result in photoluminescence phenomenon and emit photons at specific wavelengths. On the other hand, if in the presence of electron mediators such as enzyme, the electron with high energy would transfer to the enzyme and participate in the catalysis reactions [1], this fact has originally inspired us to utilize QDs and NRs to assist hydrogenases to drive hydrogen production. 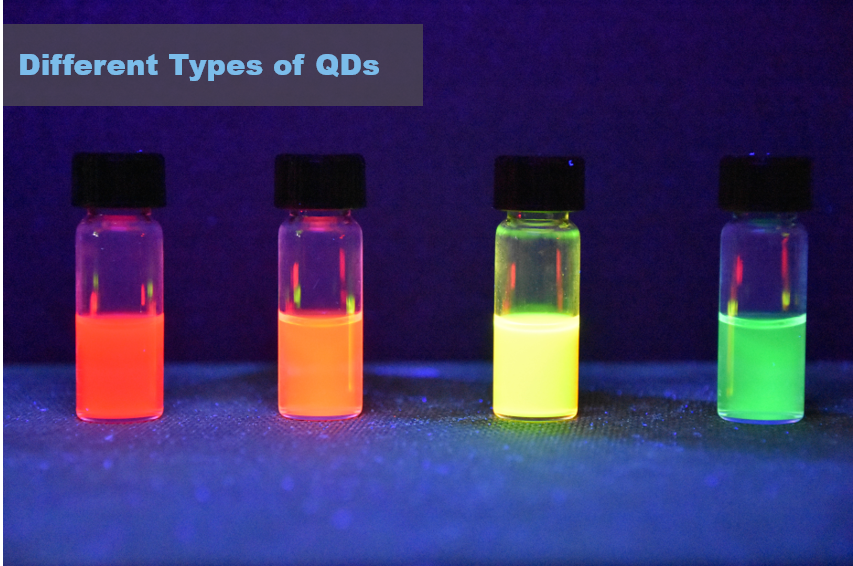 Besides the difference in energy band structure and other chemical attributes, we take great interest in the difference in the shapes of the nanocrystals. After thorough literature research, we found that the merits of NRs, a one-dimension nanomaterial, may overweigh QDs’, a zero-dimension nanomaterial, in biohybrid catalysis in terms of their potential to induce conformational changes of enzymes and facilitate their biological functions if the shape fits. As suggested by a recent publication[1], the CdS NRs may contribute to N2 production by inducing the conformational changes of nitrogenase. Therefore, we utilize a simple nanorods, CdS NRs and a typical quantum dots, CdSe QDs, for the comparison of catalysis efficiency in our projects.

Ligand is also an important feature of nanocrystals. The presence of some types of ligands would increase the difficulty of growth on some lattice plane while decrease it on the others, leading to NRs using QDs as nuclei. A ligand not only can serve as a stabilizer in solution but also a functional decoration for nanocrystals. In our experiements, the product QDs and NRs are originally synthesized with lipophilic ligands and dissolve in nonpolar organic solvents such as octadecene and trioctylphophine. Ligand exchanging would allow the products to enter into water phase and thereby enable ligand-decorated QDs that would be able to bind to biofilms. The ligand we used has a NTA functional group, which was developed by the Zhong group at ShanghaiTech (Patent application submitted). NTA-capped QDs or NRs can firmly bind with His-tagged CsgA, major protein components of E. coli biofilms. In addition, we further utilize this specific binding system and unique optical properties of QDs to scrutinize the expression and formation of biofilms (as revealed in our biofilms session). 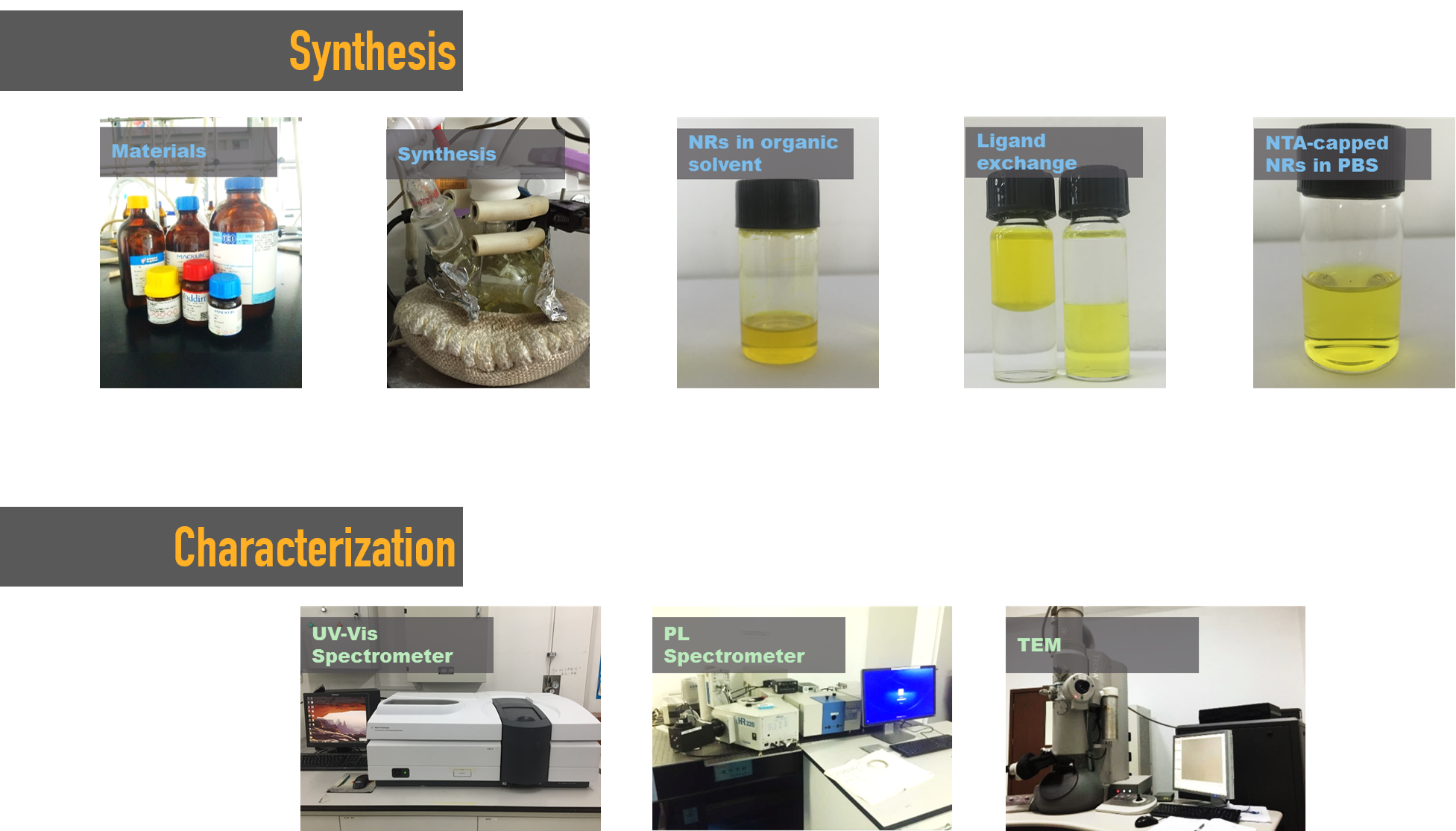 Figure 2. The flow chart for synthesis and characterization of nanomaterials.

The Ultraviolet-visible (UV-Vis) spectroscopy is an absorption spectroscopy in the near-UV and visible spectral region. The UV-Vis spectroscopy is normally used as a quantitative and qualitative characterization for different analytes. As QDs and NRs solutions contain large amount of transition metal irons, they exhibit absorption in UV-Vis range due to stimulated transision. And after determined the molar absorptivity(ε) from the concentration of Cd2+, the molarity can be calculated by the following equation:

In the equation, A(Abs) refers to absorption; ε(Abs*cm-1*M-1) refers to molar absorptivity; B(cm) refers to the length of cuvette; C(M) refers to the molarity of the QD or NR solution.The UV-Vis spectrometer we use is Agilent Cary 5000.

The Photoluminescence(PL) spectroscopy is a widely used tool for characterization of electronic and optical properties of analytes, especially quantum dots and nanorods. Briefly, the PL spectroscopy detects photon emitted in a certain spectral region when the samples are excited by light at a certain wavelength. The PL spectroscopy can be used to determine the excitation peak and emission peak. The position of the emission peak can indicate whether the synthesis of QDs and NRs is successfully performed. The best excitation wavelength and the best emission wavelength, which are of great importance for utilizing the use of QDs and NRs as characterization tools, can also be known from the position of the peaks. The PL spectrometer we use is HORIBA FL-3.

Transmission Electron Microscope (TEM) was used to image the shapes and sizes of QDs and NRs. The 120KV TEM (National protein facility center, Shanghai, China) we used provides the resolution of around 0.2nm. The TEM sample of our lipophilic QDs and NRs solution is prepared by simply dropping 10 μL of the solution on to the copper grid.

Synthesis and Characterization of CdS Nanorods 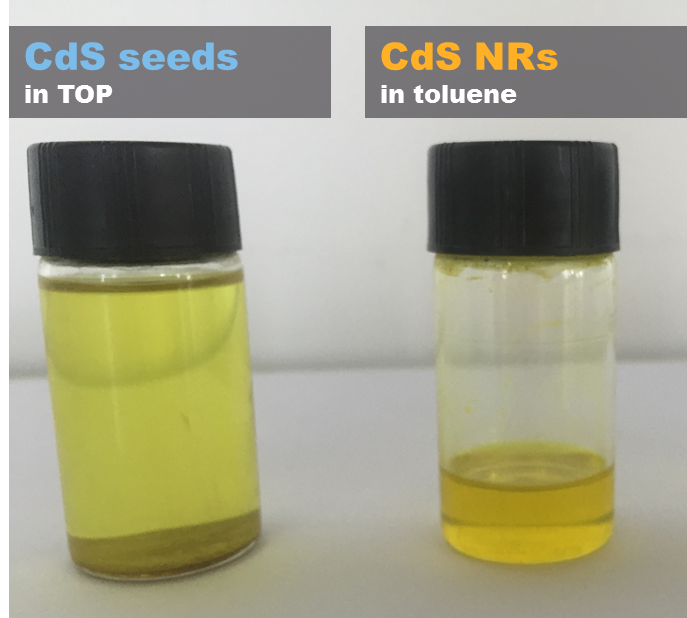 Characterization of UV-Vis was performed to calculate the concentration of CdS seed in TOP solution and CdS nanorod in toluene solution. Also, PL spectrum of CdS NRs in toluene was collected to investigate the emission attribute of the nanorod. TEM image of the nanorods was acquired to study the shape and size distribution. 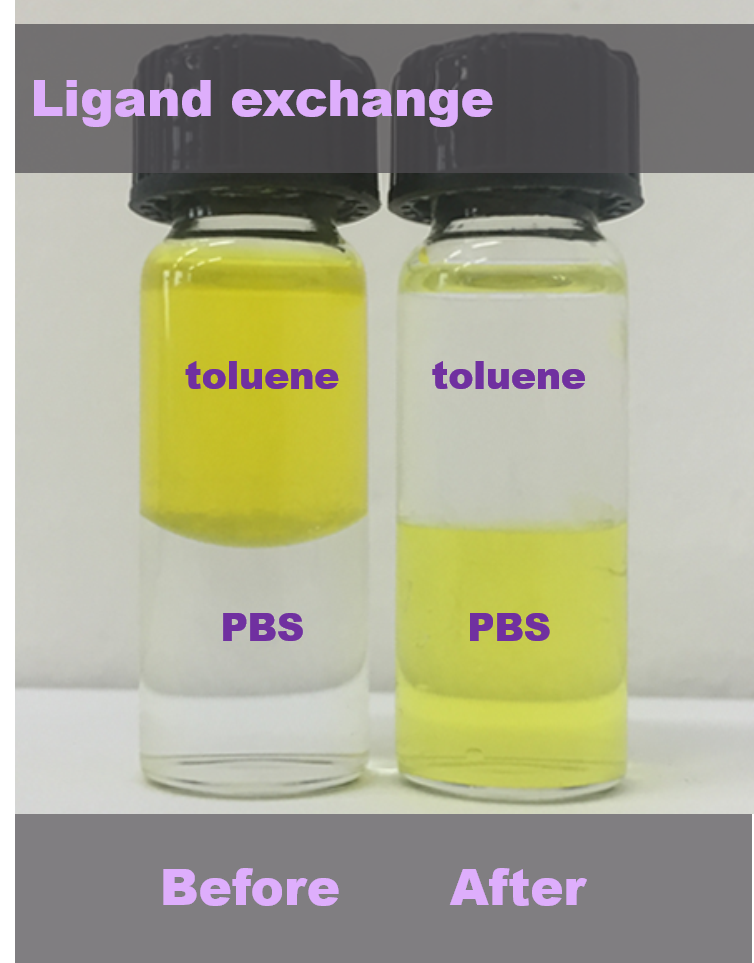 The concentration of CdS seeds and CdS NR products were determined by using the UV-Vis spectrometer (Fig. 5 A, B). The peak shown in PL spectrum (Fig. 5 C) matches the absorption peak of the UV-Vis spectra, which thus proves the synthesis of CdS NRs. 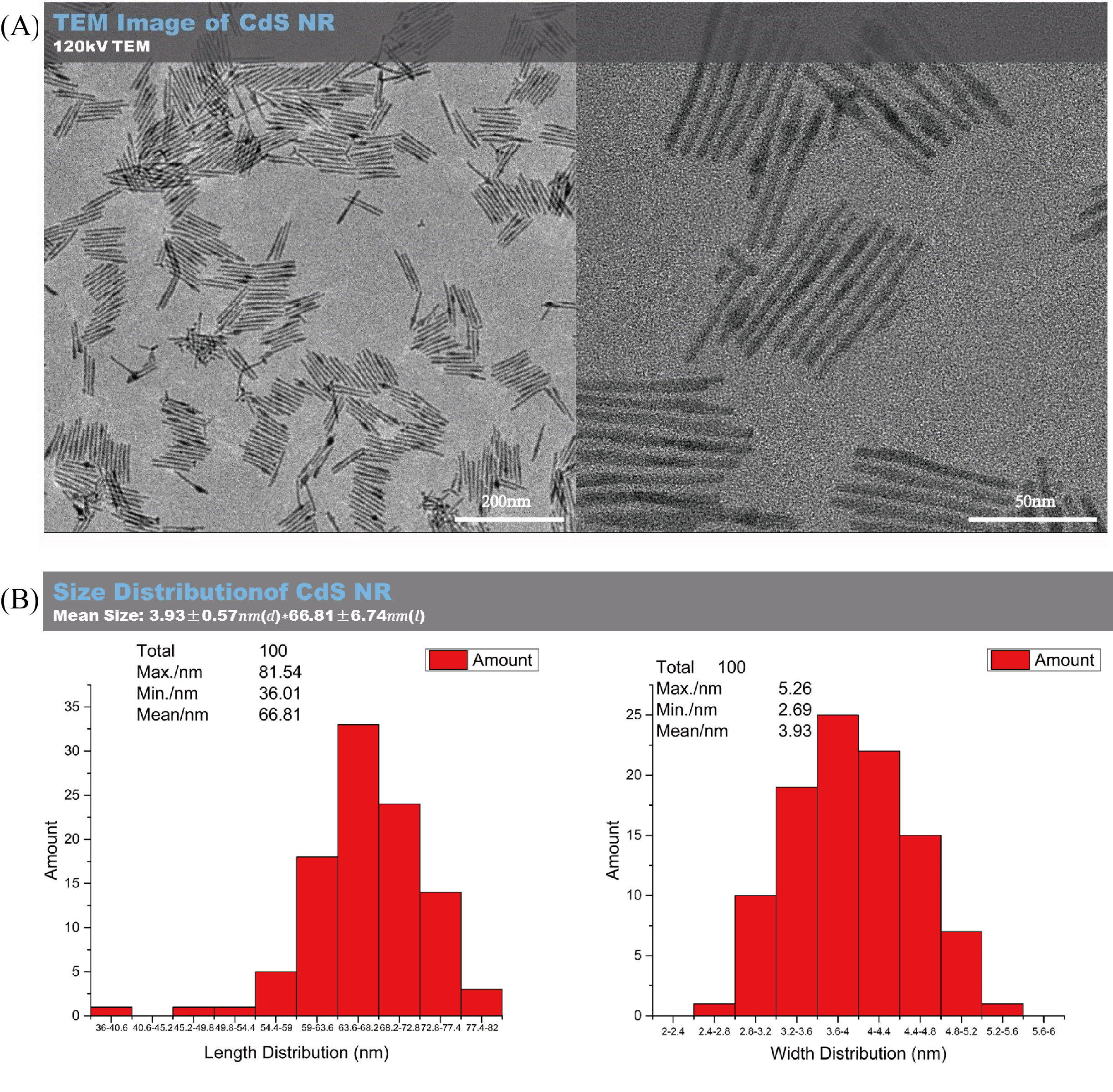 TEM confirms that synthesized products show nanorod feature, with an average diameter of 3.93±0.57nm and average length of 66.81±6.74nm.

Synthesis and Characterization of CdSe QDs

We followed a protocolfrom a previously published paper[2]. After synthesis, UV-Vis spectroscopy, PL spectroscopy and TEM were carried out to confirm the structures and features of CdSe QDs. The photoluminescence of CdSe QDs can be observed by naked eyes. Click to see the procedure

Figure 7. Experimental set-up for synthesis of CdSe QDs (a) , synthesized NTA-capped CdSe in PBS solution (b) and PL of CdSe QDs in PBS under UV light (c, excitation wavelength 354 nm)

A ligand exchange experiment was performed and the result is shown in Figure 7(B). 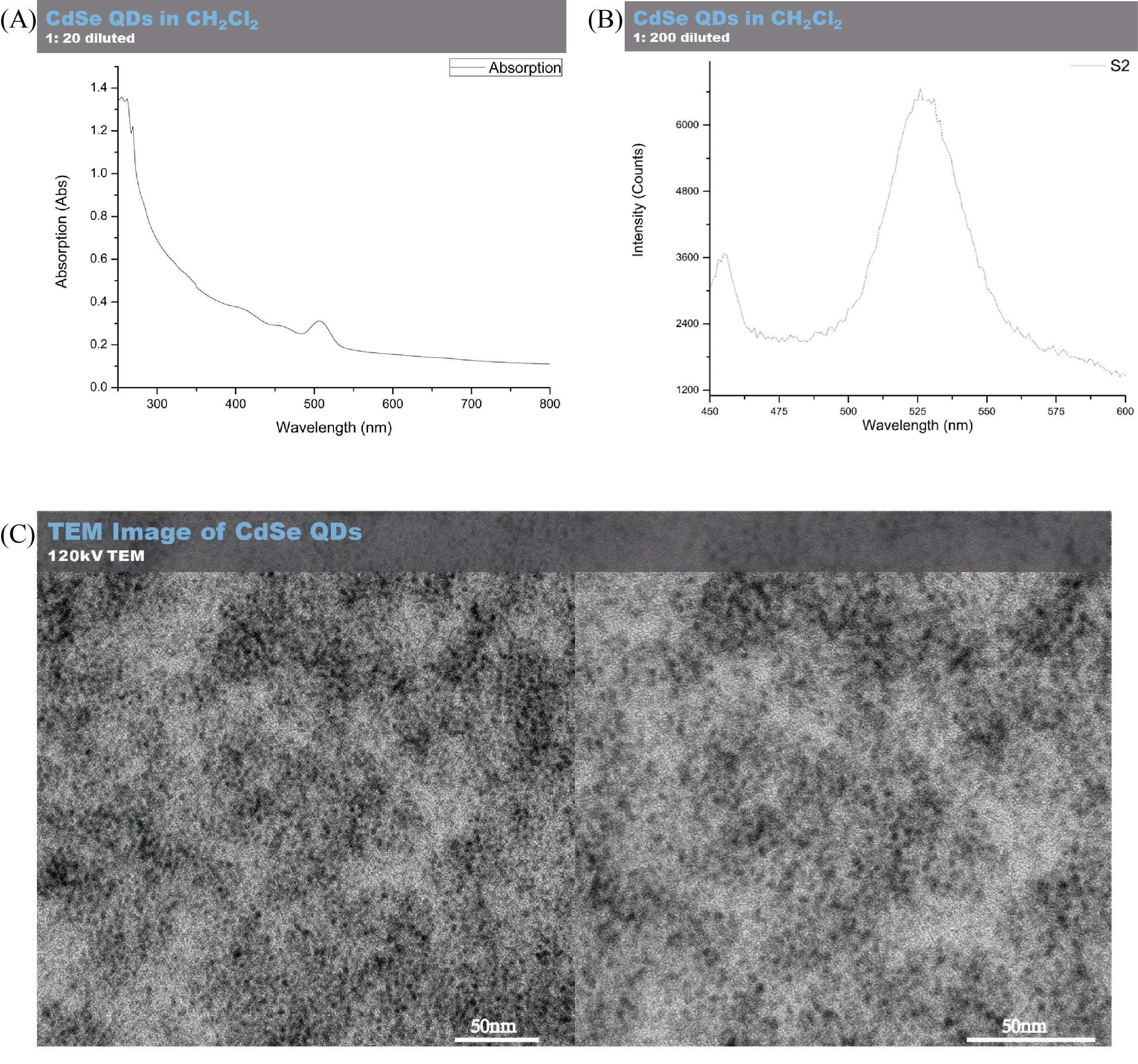 We used UV-Vis spectrum to confirm the successful synthesis of CdSe QDs. The absorption attribute of the QDs has indeed been approved (Fig 8. A). The QDs/CH2Cl2 exhibits an emission peak at 528nm, which matches the absorption peak of the UV-Vis spectra (Fig 8. B). Finally, we used TEM to show that CdSe QDs have nanoparticle features, with an average diameter of 6-8 nm (Fig 8. C).