This year, Tufts Synthetic Biology collaborated with the MIT iGEM team on their Human Practices project. Invitrogen has created a tool for screening ligation reactions during the Golden Gate cloning process. The Invitrogen tool contains the CcdB gene in the pDEST vector as a negative screening tool. Since the CcdB gene codes for a toxin which inhibits systems in Escherichia coli, any uncut vector transformed into E. coli would prevent growth of a colony, drastically reducing the amount of colonies on the plates due to transformed, uncut vector.

As the pDEST-CcdB gene sequence is the intellectual property of Invitrogen, the MIT iGEM team created an alternate screening tool, pDEST-mCherry. mCherry is a fluorescent protein which can be seen with the naked eye. As a result, any colonies resulting from the uncut vector will be red, and so easily distinguished from successful ligation reactions. MIT also developed a protocol for other iGEM teams in the future.

Tufts Synthetic BIology tested the protocol with the strain of E. coli in which we have been doing all of our cloning, JM109 from Promega, and successfully produced colonies with clones of our Golden Gate reaction. The pictures below demonstrate the mixture of red and white colonies, which allowed us to easily and accurately pick out successful ligation reactions from background. 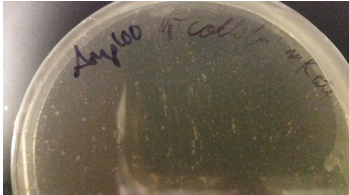