In summary, our team successfully extracted sugar from almond waste, designed and built a cheap DIY-friendly bioreactor, programmed a functional control system and interface, designed a system to filter out bacteria which removed all cell mass in experiments, and gained a deeper understanding of the social and economic context of agricultural waste conversion. With hours before the wiki freeze, the Metabolics Design team received preliminary confirmation of Erythritol production using an HPLC column from engineered Bacillus subtilis. Our process works end to end, moving agricultural waste to Erythritol and opening avenues for future projects and chemicals.


Our project this year was to create a complete system, inputting agricultural waste and outputting erythritol. In order to complete this objective, the following design teams were assembled.


These teams represent all the components necessary for the movement of agricultural waste, in this case almond shells, to erythritol, a high value alternative sweetener. Each design team worked to complete their objectives over the course of the summer, some design teams completed their main objective and then split or reformed into new teams to accomplish additional tasks.


The goal for extraction was to separate the large protein and fiber particles of the almond hulls from its sugars which would be used to feed the bacteria in the bioreactor. Our early attempts at this involved boiling the hulls and running that boiled solution through a filtering system. The almond hull filtering system was made using a coffee filter attached to a vacuum apparatus to pull the boiled almond hull solution through the filter. The coffee filter proved to be structurally unstable, so another method was attempted using a polyester silk filter. This method successfully filtered out much of the large almond hull debris, but left a buildup of sediment in the solution. To account for, and test the significance of this sediment build up, we also tried filtering the almond hull extract through the prototype 2 filtration system, the filtering system which was originally made for the purification of erythritol from B. subtilis. This method resulted in no sediment in the final almond hull extract, meaning it was purified further than with the silk filter.

In order to analyze the growth efficiency of B. subtilis in the almond hull extract, different dilutions of almond hull extract were made to represent differing growth conditions. The results show that B. subtilis actually grew the best in 100% Milli – Q water and next best in 75% Milli – Q water (25% hull extract), aside from the LB positive control which grew much more than anything else, as expected. Tests were done growing B. subtilis in liquid solutions of LB with erythritol in order to gain an understanding of how erythritol would affect the growth rate, and ability to survive. The tests showed that B. subtilis grows suitably in 1 – 10% erythritol but begins to struggle when levels get up to 15%. This information will be important for extracting our solution from the bioreactor; we must keep the erythritol concentration inside the bioreactor suitable for B. subtilis growth in order for it to most efficiently grow and produce erythritol. 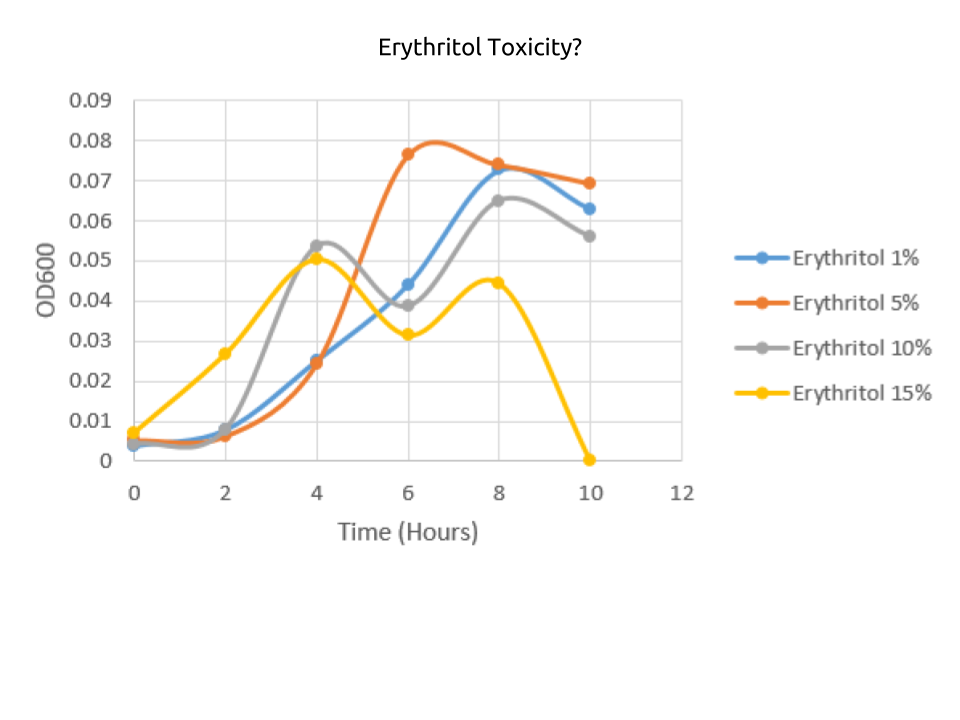 
In order to create a project and process that more closely resembles real world applications, we built a bioreactor to house the our bacteria. While there is high merit in performing successful engineering in a lab setting, everything must be placed in the context of the larger scientific community, which includes scaling and viability. The bioreactor we created is certainly small and more in line with DIY synthetic biology, but it serves as a reminder to everyone that we need to posit our project into the world at large.

The main idea behind the bioreactor was to build a chemostatic system that continuously pumps out erythritol being produced by the bacteria. The bioreactor consists of three main chambers; a nutrient tank, a bacterial growth tank, and a collection chamber. The almond hulls are roughly processed by heating them in water to extract the sugars, which are then dissolved into a basic growth media is put into the nutrient tank. The nutrients are pumped into the growth chamber at a rate proportional to the growth factor of the culture, which is determined experimentally through the doubling time of the particular bacterial strain. Inside the growth chamber, there are pH and temperature sensors, as well as an impeller pump to prevent settlement of bacteria and optimal aerobic conditions. Another pump pulls the liquid from this chamber through a filter composed of several interlocking sections that purify the reactor's byproducts. 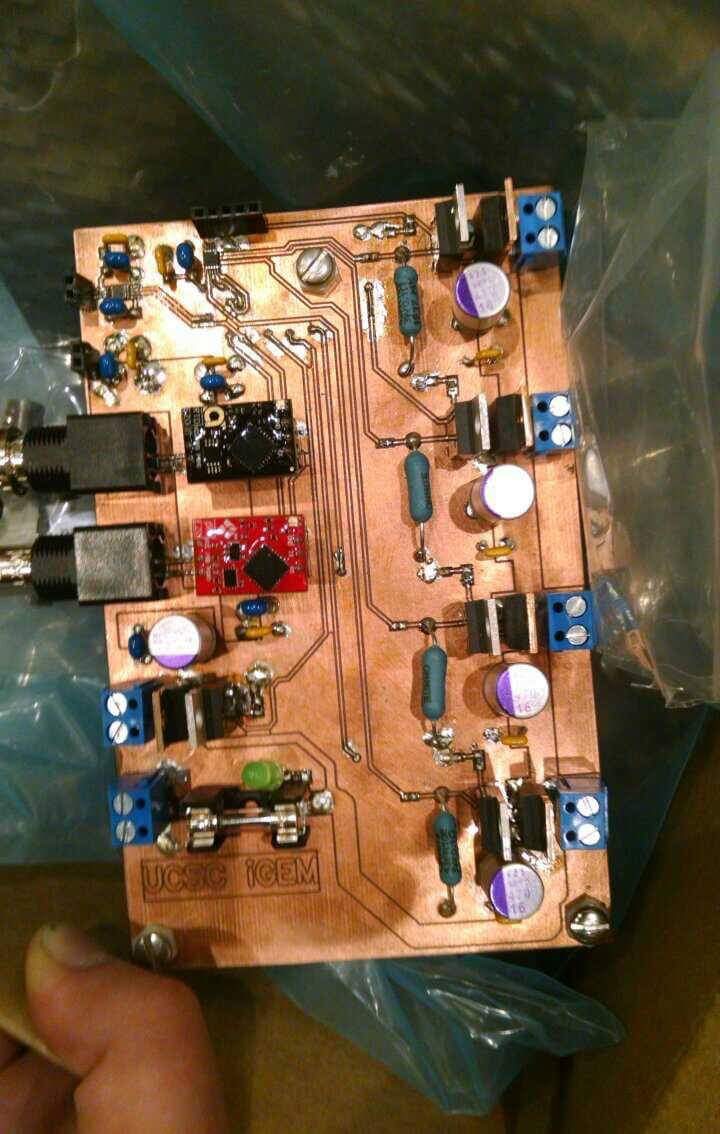 
In order for the bioreactor to be fully autonomous and user friendly, a website application was developed. The website was designed to control and handle the incoming data from the bioreactor hardware. The application was built upon a python package called Flask, one graphing package, Bokeh, and presented to the web via an HTML file containing JavaScript and CSS elements. The Flask server runs on a virtual machine which directly connects to the bioreactor computer to allow for the transfer of data.

The goal of the software team was to increase the bioreactor ease-of-use and integration with the other parts of our process. A friendly user interface allows for control of the system from anywhere you have internet access because of the established servers and connection of the bioreactor to a Raspberry Pi.


To optimize erythritol output in our organism, we chose the bacteria B. subtilis PY79 because its doubling time, transformation efficiency, and shuttle vectors compatible with E. coli were optimal for cloning. While B. subtilis PY79 is usually a sporulating bacteria, B. subtilis 3NA is a non-sporulating strain. Spores could cause problems with chemical regulation inside the bioreactor and could create problems in filtration; although B. subtilis 3NA proved to difficult to transform to be used in cloning. We also took note that B. subtilis is GRAS (Generally Recognized as Safe) designated by the FDA (Federal Drug Administration) because we are using it to produce an edible product. PY79 was shown to reach high cell densities during fed-batch fermentation and has the potential for high production rates. The promoter, called pylb, that was used has been shown to be highly active in the stationary phase, when the cell culture has reached maximum density. Using this promoter with our insert gives B. subtilis PY79 the opportunity to grow to a high cell density without expending energy for erythritol production during the exponential growth stage. Once the culture has reached maximum cell density the pylb promoter will activate transcription and erythritol will be excreted from the cells. The bioreactor can be remotely accessed to supplement different levels of nutrients at different growth stages, and controls the flow rate of the system. Nutrient feedstock is derived from almond hulls. At stationary growth phase, the B. subtilis culture inside the bioreactor produces erythritol and the flow out goes through a filtration system that purifies for erythritol. The nutrient input into the bioreactor can then supplement higher levels of almond hull sugar extract into the culture, allowing breakdown of this agricultural waste while driving erythritol production. 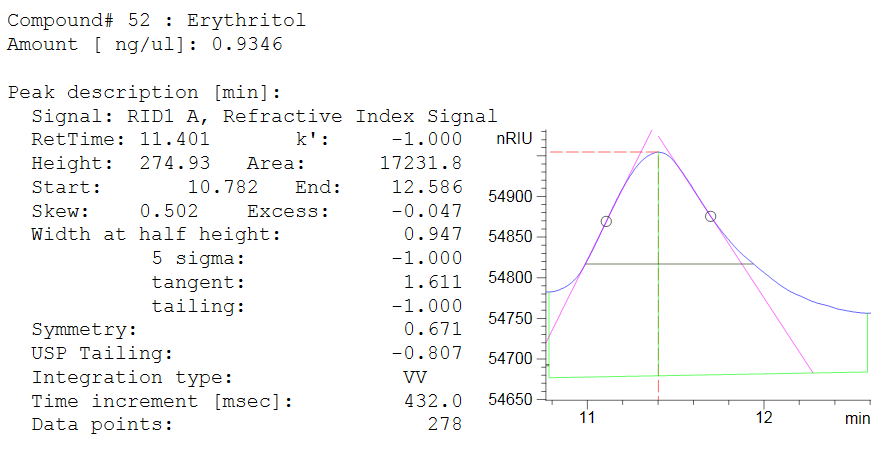 
To filter out cellular debris from smaller molecules, we have constructed a filtration system out of PVC pipes with 3 tightly sealed unions. The system begins with a series of reducers to filter the bigger debris. Then there sits a 1.5 cm thick layer of diatomaceous earth (DE) atop a silk disk to filter the smallest of molecules. This is repeated in a second attachment. B. subtilis cultures were run through the filter and plated on LB agar plates, with results showing they were 99% pure of cells. The filter was also tested with a solution containing erythritol, then tested with High Performance Liquid Chromatography (HPLC) to show that the solution still contained erythritol. Our final prototype had a reduction power of 99.997%. With this filtration/purification system connected to the bioreactor, we would be able to successfully filter out essentially all of the bacteria grown in the bioreactor in order for erythritol to be extracted.


Our mission was to unite the two distinct crises of agricultural waste and the rising obesity epidemic into a mutual solution. In order to accomplish this goal, we knew we needed to do more than just convert agricultural waste into erythritol, we needed to ensure expanded accessibility and adoption of zero-calorie sweeteners. In every step of our journey to understand public perceptions surrounding health consequences of alternative sweeteners, promote cost reduction, and explore the definition of ‘natural’, we collected vital information regarding how to communicate and connect with the public. Each interview we conducted from the diverse array of professors, nutritionists, elected officials, iGEM students, industry experts, and researchers allowed us to accumulate and analyze this information. Our debate, presentations, student engagement, survey, bioreactor, and Build-A-Bioreactor handbook represent our integration of that information into our overarching missions of reducing costs, educating the public, and ultimately expanding accessibility to zero-calorie sweeteners.