Analysis of metabolic pathways helped us decide what approach was best to engineer an organism to produce erythritol. While some organisms were shown to produce erythritol naturally, we mainly aimed to find one that naturally produced a precursor, erythrose-4-phosphate (E4P). E4P is produced in many bacteria in the pentose phosphate pathway.

Previous attempts to complete this engineering in other organisms showed at least two necessary genes were needed to convert erythrose 4 phosphate to erythritol. An enzyme was needed to remove a phosphate and convert the molecule to erythrose. For this we used TM1254, an erythrose-4-phosphate phosphatase, isolated from the thermophile Thermotoga maritima MSB8. GLD1, an erythrose reductase, isolated from the filamentous fungi Trichoderma reesei, was then used to complete the final reaction in our pathway to erythritol.

Visual representation of the gene construct designed to engineer the Erythrose reductase pathway into B. subtilis. Pylb is the promoter. TM1254 and GLD1 are the genes required to complete the Erythrose reductase pathway and produce erythritol.
It was important to consider energetic favorability in the genetic engineering of our metabolic pathway. This played a role in the balancing of chemical resources within the cell between pathways that promote cell proliferation or viability and those that made erythritol production. Majority of reactions to produce erythrose-4-phosphate in the cell use fructose-6-phosphate as a key reactant. Fructose-6-phosphate also serves as a primary reactant in glycolysis, one of the metabolic pathways necessary for cell survival. By driving the conversion of E4P → erythritol, we worried that during exponential growth stage, we would create a ‘carbon sink’, causing continuous over-consumption of available fructose-6-phosphate, and as a result reducing available reactants for the glycolytic pathway. This could potentially result in cell death or low erythritol yield. To account for this, we aimed to engineer a method that yielded minimal production of our enzymes during exponential growth yet strong upregulation during stationary phase. 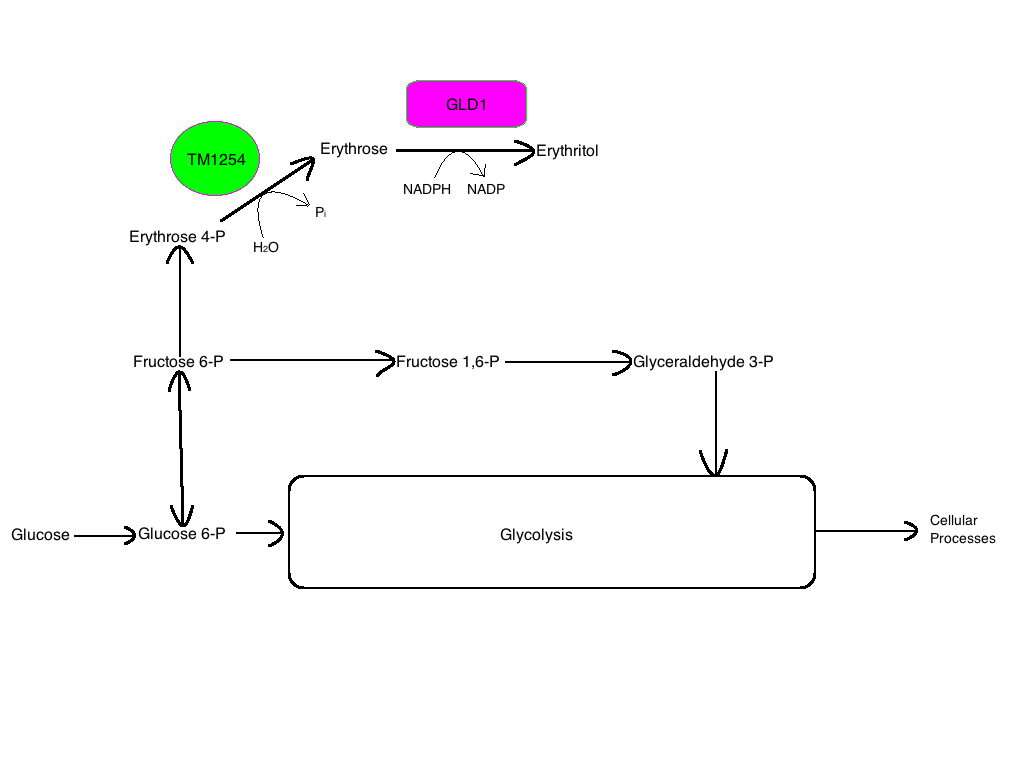 Schematic representation of engineered erythritol production in B. subtilis. Erythritol is produced with the introduction of 2 genes, encoding an erythrose 4-phosphatase (TM1254), and an erythrose reductase (GLD1), respectively.

Genes are generally regulated with the use of transcriptional promoters. For the engineering of our gene insert, an endogenous B. subtilis promoter Pylb, was chosen as it was shown to be highly efficient in the stationary growth phase. Many promoters are identified for B. subtilis, but most would not work with our design. One of the strongest known constitutive promoters to date, Pveg, controls transcription of the veg gene, a gene thought to play an important role during the outgrowth of spores. We attempted cloning in the non-sporulating strain, B. subtilis 3NA; but 3NA proved not transformation efficient enough for our engineering and we therefore used the wildtype PY79 strain. We did not want lack of sporulation to negatively impact production of erythritol, and so opted not to use the Pveg promoter. A strong inducible promoter, PxylA, induced expression in the simultaneous presence of xylose and absence of glucose. Because almond hulls were known to contribute a non-negligible percentage of glucose, this promoter was removed as an option. It was thought that constitutively strong promoter activity, such as that of P43, during the vegetative stage would prevent necessary cell growth. “Compared with P43 (a commonly used constitutive promoter), promoter Pylb could express two reporter genes (egfp and mApple), and the expression levels of EGFP and RFP were 7.8- and 11.3-fold higher than that of P43, respectively.” Because Pylb is the most active in the stationary phase, it was used in our gene insert to produce the erythritol metabolic pathway.

Certain characteristics that were considered important to the success of the project were analyzed such as doubling time, transformation efficiency, shuttle vectors compatible with E. coli, or if the organism already contained erythritol producing genes. We also took note that the microbe was GRAS (Generally Recognized as Safe) designated by the FDA (Federal Drug Administration) since we plan to use it for producing a food additive. We considered several different microbes, among them were: Lactobacillus florum, Oenococcus oeni, Aspergillus niger, and Bacillus subtilis. L. florum, O. oeni, and A. niger all naturally produce erythritol, while B. subtilis was very well studied and has been used in metabolic engineering many times by previous iGEM teams. While B. subtilis is usually a sporulating organism, we were able to obtain a mutant strain that is non sporulating from the UC Davis iGEM team called 3NA. Sporulation could potentially contaminate the bioreactor and cause problems with filtration. B. subtilis also naturally produces erythrose-4-phosphate, the appropriate precursor for our ideal engineered erythritol production pathway. B. subtilis is also used in large scale industry, a potential application of our erythritol production system. Keeping in mind that we have only a limited time to complete this project, we chose B. subtilis because we were the most confident that we could successfully engineer it to produce erythritol in that time frame. The B. subtilis strains that we received from the UC Davis iGEM team and used for our project were named PY79 and 3NA, these strains are wildtype, and non – sporulating respectively.

The plasmid used to assemble our gene insertion construct was pBS1C. This plasmid is a common choice for synthetic biology with B. subtilis (see: The Bacillus BioBrick Box: generation and evaluation of essential genetic building blocks for standardized work with Bacillus subtilis). The plasmid is replicative in E. coli, and integrative into the B. subtilis genome. Within this integrative portion lies a biobrick gene cassette containing an RFP insert encased in a biobrick prefix and suffix, followed by chloramphenicol resistance. The vector also encodes ampicillin resistance outside of the integration site, for selection in E. coli. The biobrick plasmid design created an optimal system for insertion of our plasmid into B. subtilis. The RFP can be removed and replaced with our gene insertions, allowing an additional layer of screening for successful assembly when transforming into E. coli; the colonies growing on ampicillin yet containing the original plasmid will appear red, while those containing a plasmid that contains our gene insert will appear white. 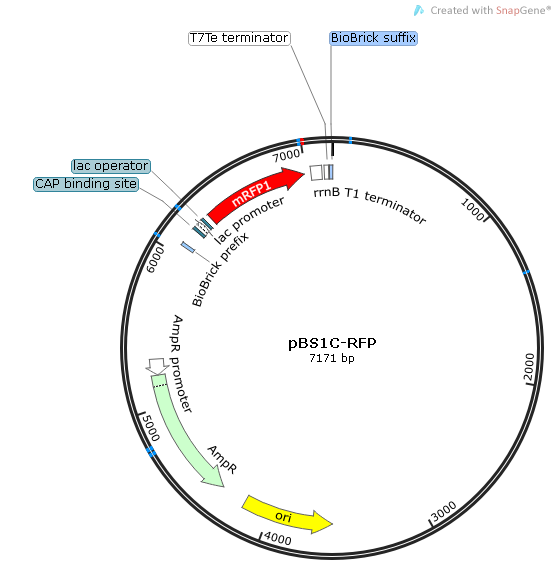 pBS1C-RFP: This map shows the plasmid used for gene construct assembly. The plasmid contains a BioBrick prefix and suffix for easy restriction digest, an RFP within this region for better screening by RFP-removal, and a chloramphenicol resistance. The plasmid also contains an E. coli ori as well as an ampicillin resistance.