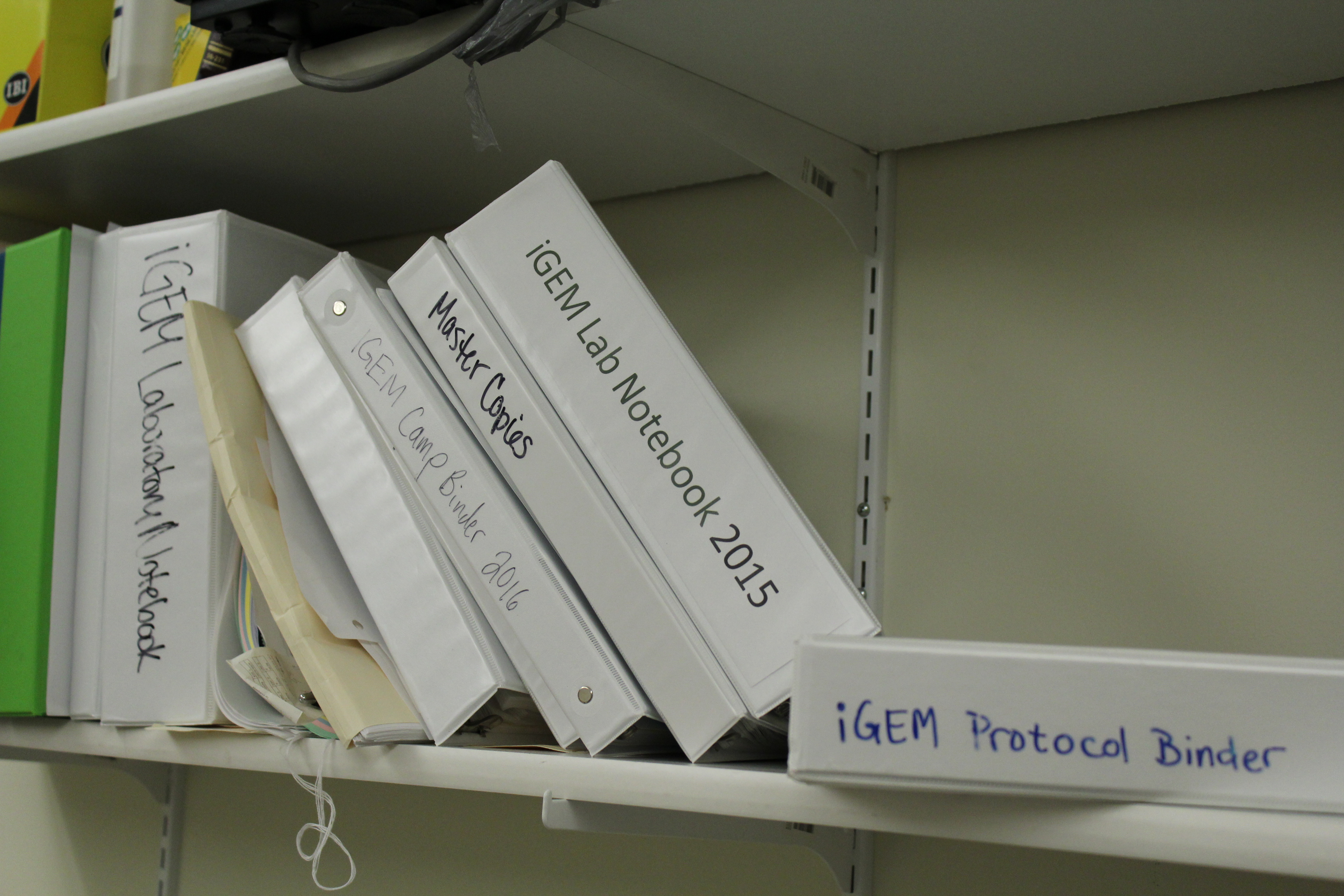 This month we had to begin organizing the summer camp that would occur on campus in July. Jordyn met with campus housing to reserve dorms for our campers. The campus cafeteria was also contacted to request lunch boxes for the campers during the day.

We held our first meeting this week to get to know one another and to get an idea on the interests of our fellow teammates. We ended the meeting with an icebreaker and organizing team leads for each portion of our project; with lab work planned to begin next week.

Lab activities this week consisted of the plasmid isolation of the tolC gene on pUC57 for Salmonella enteric, Klebsiella pneumoniae, Escherichia coli, and Vibrio cholera in order to move to iGEM shipping plasmid pSB1C3. Thus beginning our lab activities for the year as a continuation of last year's project. This lab was completed by Nathan, Melissa and Anna. Restriction enzyme digest followed to remove the part from the plasmid. A gel extraction was conducted by Harrison, Anna and Nathan. Restriction enzyme digest followed. Elise concurrently worked on moving the tolC genes, without the pBAD promoter to a medium-copy-number plasmid: pTrc99A.

We met again this week to brainstorm ideas and begin getting our Policy and Practices area of the project off the ground. Harrison began creating lab schedules that would work for everyone over the summer and Jordyn emailed interview questions to various coral reef experts.

Lab activities consisted of attempting again to move the tolC genes for V. cholerae, S. enterica. K. pneumonia, and E. coli which was largely worked on by Harrison and Melissa (the first trial had proven unsuccessful because of low DNA concentration).

Jack contacted the various speakers for the camp and finalized the times that they would lecture.

In the lab a gel electrophoresis protocol was performed by Harrison which determined that the second enzyme digest with the four tolC genes was unsuccessful. A new plasmid isolation was performed with the above tolC genes by Ching Tzu and Theresa Boyadjian with just the tolC genes for K. pneumonia and E. coli.

Lab consisted of an enzyme digest using the products of the plasmid isolation from the previous week which was conducted by Harrison and Ching Tzu. Gel electrophoresis by Harrison confirmed that the E. coli tolC gene was successfully removed from the plasmid. Meanwhile, Elise verified that many of the tolC genes were moved successfully into pTrc99A.

Another meeting was held with the all the team members. Specific goals were set and responsibilities were handed out. A survey was written up to be sent out to WELS home school teachers to formulate an educational plan. Article topics for background information were decided on and Elise, Melissa, Anna, and Nathan volunteered to get those completed.

The E. coli tolC gene from the previous week was extracted from the gel and a ligation to the pSB1C3 vector was attempted but was unsuccessful. pSB1C3 plasmids containing the tolC genes of Proteus Mirabilis were enzyme digested in order to obtain more iGEM shipping plasmid. After this, Harrison ran a gel of the restriction digests and a gel extraction. Ligation of the E. coli tolC to pSB1C3 followed.

Our project was solidified and plans began to form. Committees were organized to help make things run more smoothly. The new part that was ordered arrived this week: the tolC gene for Serratia marcescens on pUC57 with the pBAD promoter. After the part arrived it was transformed into DH5α E. coli competent cells via electroporation. Elise started working on moving this tolC gene into pTrc99A.

The school year was coming to a close so any loose ends were wrapped up to ensure a fun summer. Jack contacted MSOE to guarantee their involvement with the Bioengineering Summer Camp.

Another round of camp flyers were sent out to WELS churches. We also advertised the Bioengineering Summer Camp on our Facebook page.

After a brief break in lab activities, work resumed by looking for bacteriophages that would bind to the TolC protein for S. marcescens. This was accomplished using the new part containing the S. marcescens tolC gene. This will allow phages specific to this pathogen to bind to E. coli that have the protein inserted in their outer membrane. Additionally, Elise worked on Kirby Bauer assays with the strains that contained tolC genes on pTrc99A. These validated the function of TolC.

The student lecturers, Jordyn and Jack, at our summer camp finished the PowerPoint lectures that would be used to educate our campers. We created lectures on viruses/phages and antibiotics.

The t-shirt design for the summer camp was agreed upon with the entire team and were then ordered. Campus housing was contacted to give an exact number of campers and chaperones that would be staying on campus. The school cafeteria was also informed on the number of campers and any concern of food allergies.

This week was really focused on making sure that everything was prepared for the summer camp. Speakers were reminded of their specific time and topic, lab manuals, and binders were organized for our fellow campers. We were prepared to welcome our students for a week of bioengineering fun!

The week before summer camp was quite hectic. Staff members wanted to make sure that everything was perfect for our high schoolers. The meal schedule was finalized and grocery shopping occurred this week. The binders were filled with the PowerPoints of all of our lecturers and the lab was stocked with all the materials that would be needed.

Summer Camp week! Read about the blast that we had with our students here. Unfortunately, lab progressed fairly slowly due to our staff dedicating a majority of their time to the summer camp, but no regrets, as our students had a wonderful time.

This was the highly anticipated week of the Bioengineering Summer Camp! Overnight campers began to arrive on Sunday night and the rest of our campers joined us on Monday morning for a jam packed week. Campers were asked to take the same survey before and after the summer camp to gauge the impact that our camp had on them. Check out our wiki for more information on this week.

The surveys that were filled out by the summer campers were evaluated and organized onto bar graphs. We also received survey responses from the WELS teachers which were then arranged onto pie charts to be analyzed.

New freshman students were welcomed to campus this week. Jack and Harrison set up a table at the campus “Org Smorg” to recruit for the iGEM team for the following year. We set up a poster to give the new students a better idea of what iGEM really is.

This was the first week back to school and the first time that the entire team was able to be together at once. Thursday night was our first meeting and we decided that there would be weekly meetings from now until the Giant Jamboree. This week our wiki design was finalized and various parts of the project were sent to Troy to get uploaded onto our wiki. The team also decided that we would be holding another Biotechnology Information Night on campus to better educate the new freshman on the various concepts. The team discussed the easiest and most efficient ways that this could be advertised throughout campus.

Elise and Ching-Tzu started again working on moving our BioBricks into the shipping plasmid. The analysis of the various surveys we conducted began to take place. We needed to put all the survey answers into bar graphs or pie charts.

We started the design for our wiki. We began to plan more for the Biotech Info Night and continued working on the BioBrick parts. Additionally, we verified that all of the tolC genes had been successfully moved into the pTrc99A plasmid. We transformed these new plasmids into the tolC deletion strain of E. coli.

The Biotech Info Night took place this week and Elise, Harrison, and Jack spoke to the 44 students in attendance. In lab, Elise and Ching-Tzu verified that we successfully moved our three new BioBrick parts into the shipping plasmid! We met this week to get a good start on our wiki and write up our successes throughout the year.

Kirby Bauer Assays were done a final time with the strains containing all of the tolC genes on pTrc99A .

More phage screening was done to attempt to isolate phages. Our team met another time to put more information onto our wiki. We really wanted to get as much of our wiki completed before Wiki Night to avoid the stress that comes from doing everything at the last minute.

Elise and Ching-Tzu performed Western blots to verify our tolC gene expression on both plasmids.

We worked on summarizing our findings and we completed our wiki! We submitted our parts as well. Now we will focus on finishing our poster and putting together a presentation for the Giant Jamboree!