SYNBIO101: Exploring the intersection between synthetic biology and gender equity
Gender inequity is an issue that has plagued STEM fields and society as a whole for many centuries. The effects of gender bias and inequity have the potential to be extremely harmful, yet much too often go unrealized until it is too late. For example, between 1997 and 2000, 8 of the 10 drugs that were taken off the market in the United States were recalled because they had effects on women that were not investigated in previous studies (Bernheim, 2013). In the world of academia, a large underrepresentation of women has been observed when analyzing the gender ratio of students seeking advanced education in STEM fields, as well as when analyzing the gender ratio of PIs (Principal Investigators). The Gender Study conducted by the Paris_Bettencourt iGEM team in 2013, which revealed gender bias in synthetic biology and in fact found a direct correlation between success in the iGEM competition and gender mix, was the primary inspiration of the Waterloo iGEM team in investigating this matter and developing a means of engaging the community as well as promoting gender equity.

With the ambition of educating students to be less likely to convey or tolerate sexism, the Waterloo iGEM team created and conducted a 2-part workshop series entitled “Synthetic Biology and Gender Equality 101” for students at the University of Waterloo. These workshops were held in collaboration with WiSTEM, Women in Science Technology, Engineering and Maths. Workshop 1 was intended to introduce students to the intersection of synthetic biology and gender equity. It consisted of a 20-minute presentation, an activity, and an open discussion to close. As part of the activity, students generated ideas on why women drop out of science through the advancing stages of the educational and occupational hierarchies of STEM fields in the format of a pipeline. Students who attended Workshop 1 were entered into a lottery to attend Workshop 2. In Workshop 2, students were taught microbiology techniques by Waterloo iGEM team members.

The Waterloo iGEM received positive feedback from students who partook in the 2-part workshop series, thus deeming it to be a success. Success of the series can be represented by reflecting on 1 of the workshops in particular, where the planned time limit was actually exceeded as a result of an extremely active open discussion. Dialogue is extremely important in community engagement as it allows for the expression and hearing of multiple voices, as well as the exchange and generation of knowledge and ideas.

Testimonials from participants in the 2-part workshop series can be found below:

“One of the most educational experiences of my life! Thank you so much iGEM for taking time to educate students on laboratory techniques! Seriously a once in a lifetime experience! Synthetic biology is awesome!” – Sally Twin

“Everything about this workshop was awesome. I made new friends, gained a lot of lab experience and most importantly, I reaffirmed my love of lab work. Best workshop EVER!” – Anonymous

“I had never worked in a bio lab before, but this was so awesome. I learned so much and it was insanely fun. Synthetic Biology is so cool!” - Jess

“Coming to this workshop was a wonderful experience. Gaining exposure to various different laboratory techniques is extremely important and I’m happy to have participated.” – Alma Maqbool, 2A Biochemistry student 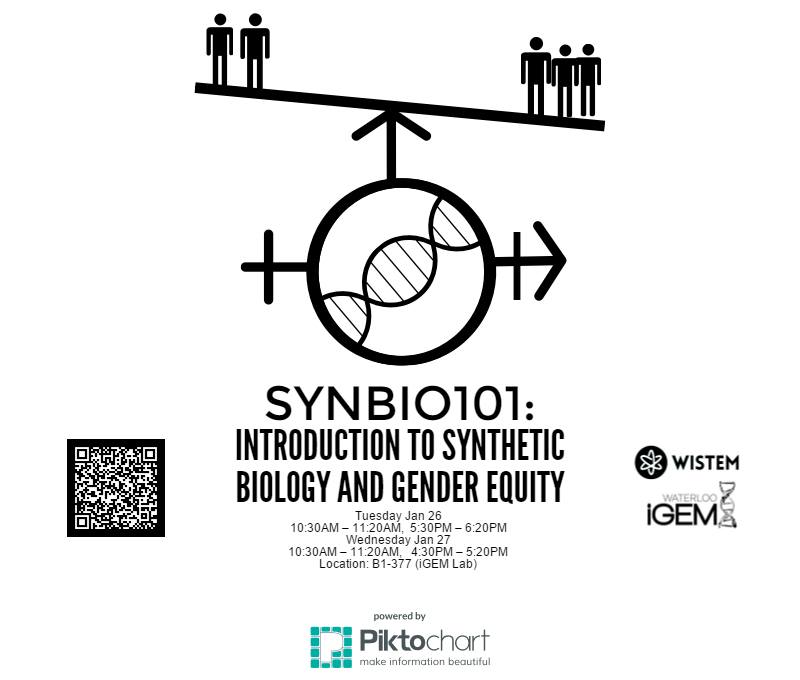 Materials
Would you like to run your own SYNBIO101 workshop? Download the presentation we used here!
References