TRIGGER: Overexpression of Sup35-NM causes yeast to go into a [PSI+] state

Figure 1: Observation of going from a a [psi-] to a [PSI+] prion state over time by overexpressing Sup35

To determine the timeframe of going from a [psi-] to a [PSI+] prion state, Sup35 was overexpressed in [psi-] yeast for 72 hours. As shown in figure 1, at the 28-hour mark GFP exponentially increases until the last time point taken. This suggests that Sup35 is also being overexpressed during this timeframe and as a result a [PSI+] is induced. Therefore, a [PSI+] starts to be visible at around 28 hours. 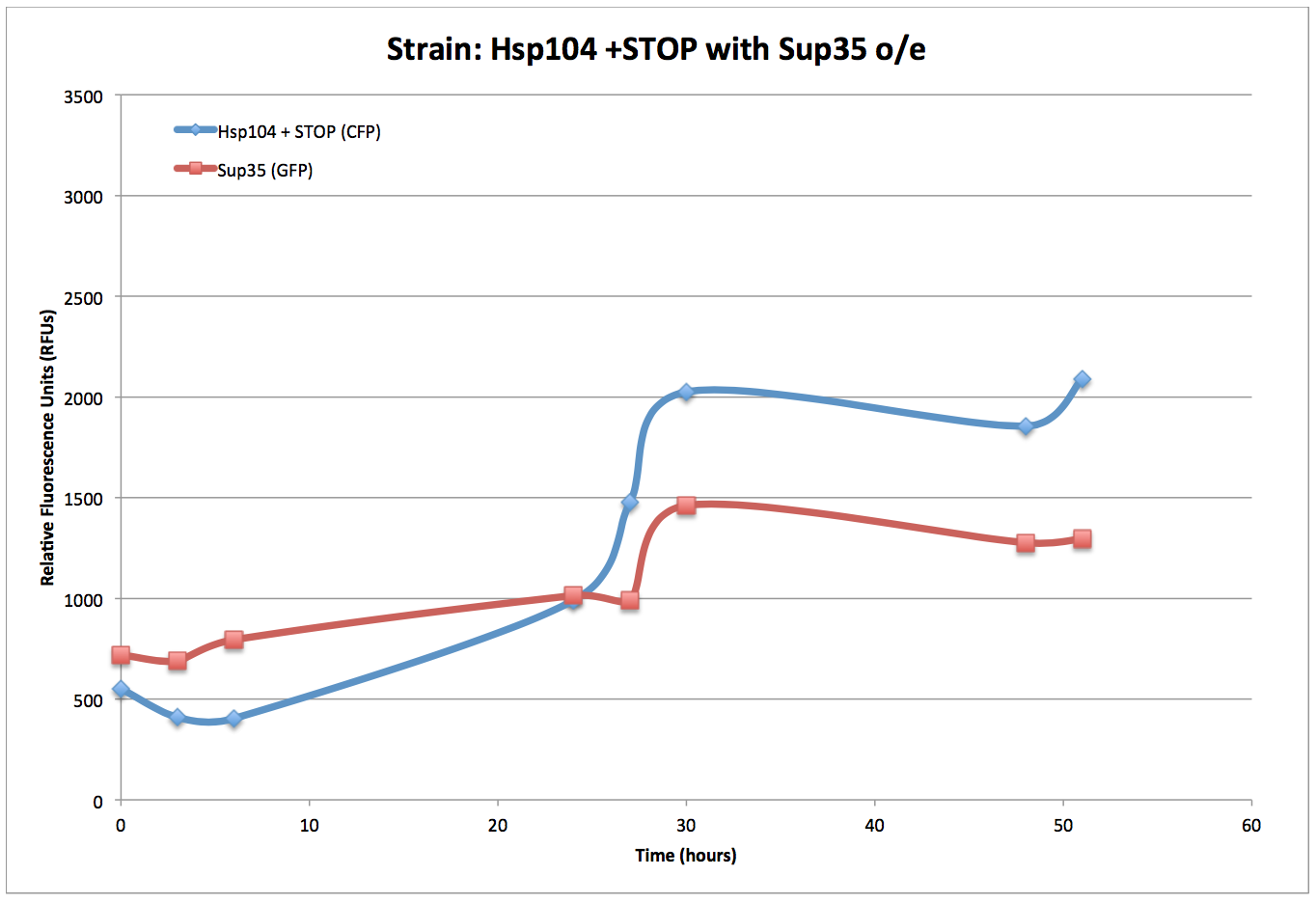 Figure 2: Observation of going from a a [psi-] to a [PSI+] prion state over time by overexpressing Sup35 in a system with a premature stop codon in Hsp104

When observing yeast cells that have both Sup35-GFP and Hsp104+ STOP contransformed plasmids, both relative Fluorescence Units (RFUs) over the period of 52 hours follow a similar trend. For the first 25 hours overexpression of Sup35 (as observed by GFP) triggered the yeast cells to go from a [psi-] to a [PSI+] prion state. This caused the RFUs of Hsp104+Stop levels to also gradually increase as more Sup35 proteins misfolded and aggregated. This is because the misfolded Sup35 is unable to retain its original function as a translational terminator, resulting in a significant difference to the readthrough rate of the stop codons. The readthrough of the premature stop codon allows the ribosome to translate a functional CFP that would increase fluorescence.

During the 25-30 hour timepoints, there is an exponential increase of both GFP and CFP indicative of a prion state. But also since Sup35 is unable to remove the ribosome at the premature CFP stop codon during translation during a [PSI+] state, CFP levels also exponentially increase. This is consistent with Figure 1 which shows a [PSI+] state starts to be induced at 28 hours.

As CFP levels exponentially increase, so do Hsp104 levels triggering a curing state in a negative feedback loop as visible between 30-48 hours. Hsp104 starts breaking apart the amyloid and diluting the amount of misfolded Sup35 which in turn, allows functional Sup35 to correctly terminate at the premature stop codon, reducing CFP and Hsp104 levels and helping cure the [PSI+] state in the process. However as Hsp104 levels decrease, Sup35 is able to misfold again as it is being overexpressed which again increase CFP and Hsp104 levels as are visible between 48-52 hours. 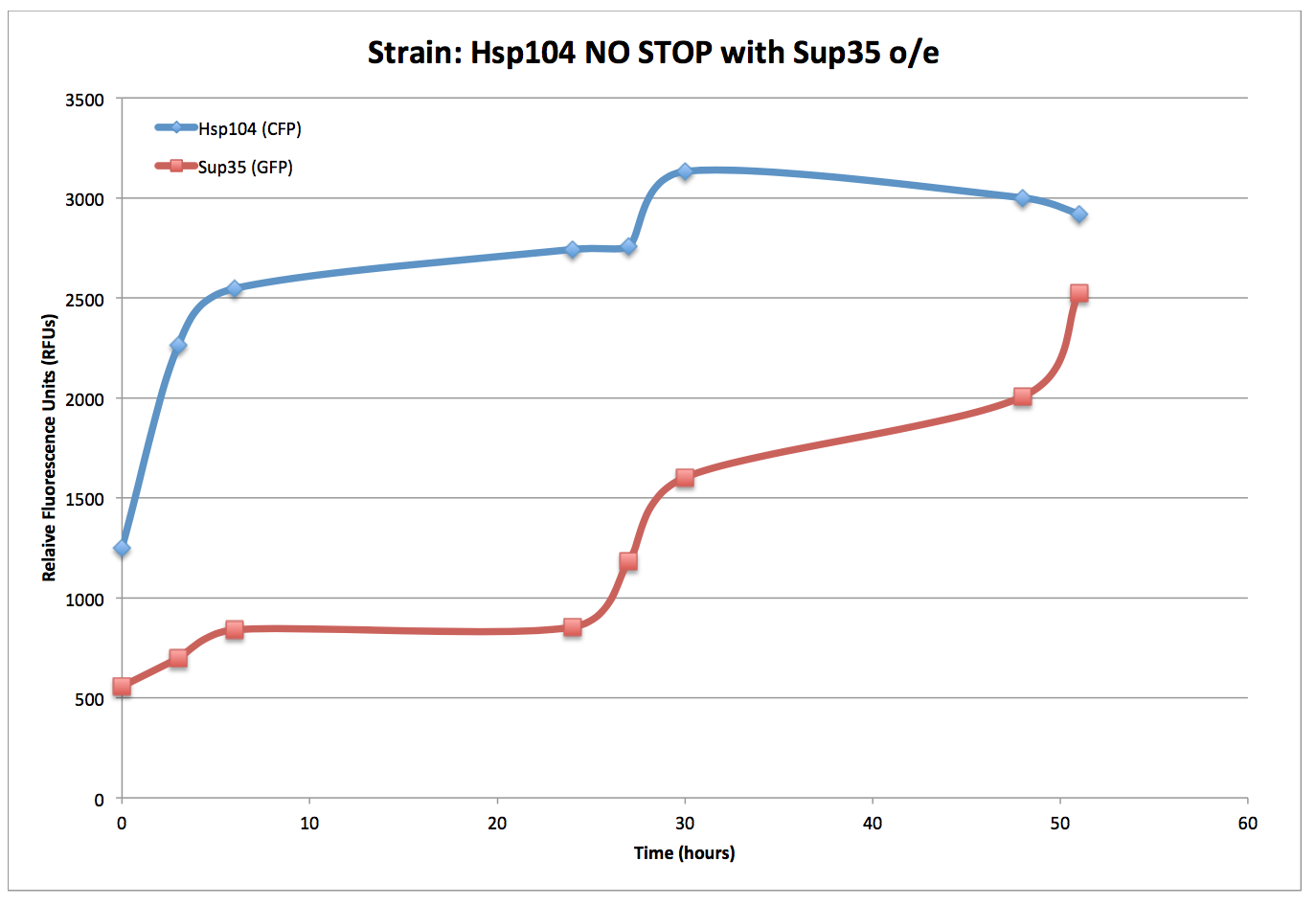 Figure 3: Observation of going from a a [psi-] to a [PSI+] prion state over time by overexpressing Sup35 and Hsp104

Overexpressing both Hsp104 and Sup35 that were cotransformed into [psi-] yeast aused fluorescence of CFP (for Hsp104) and GFP (for Sup35) increase overall, there is no discernable correlation between them. This shows that Hsp104 and Sup35 overexpression without a stop codon are independent. 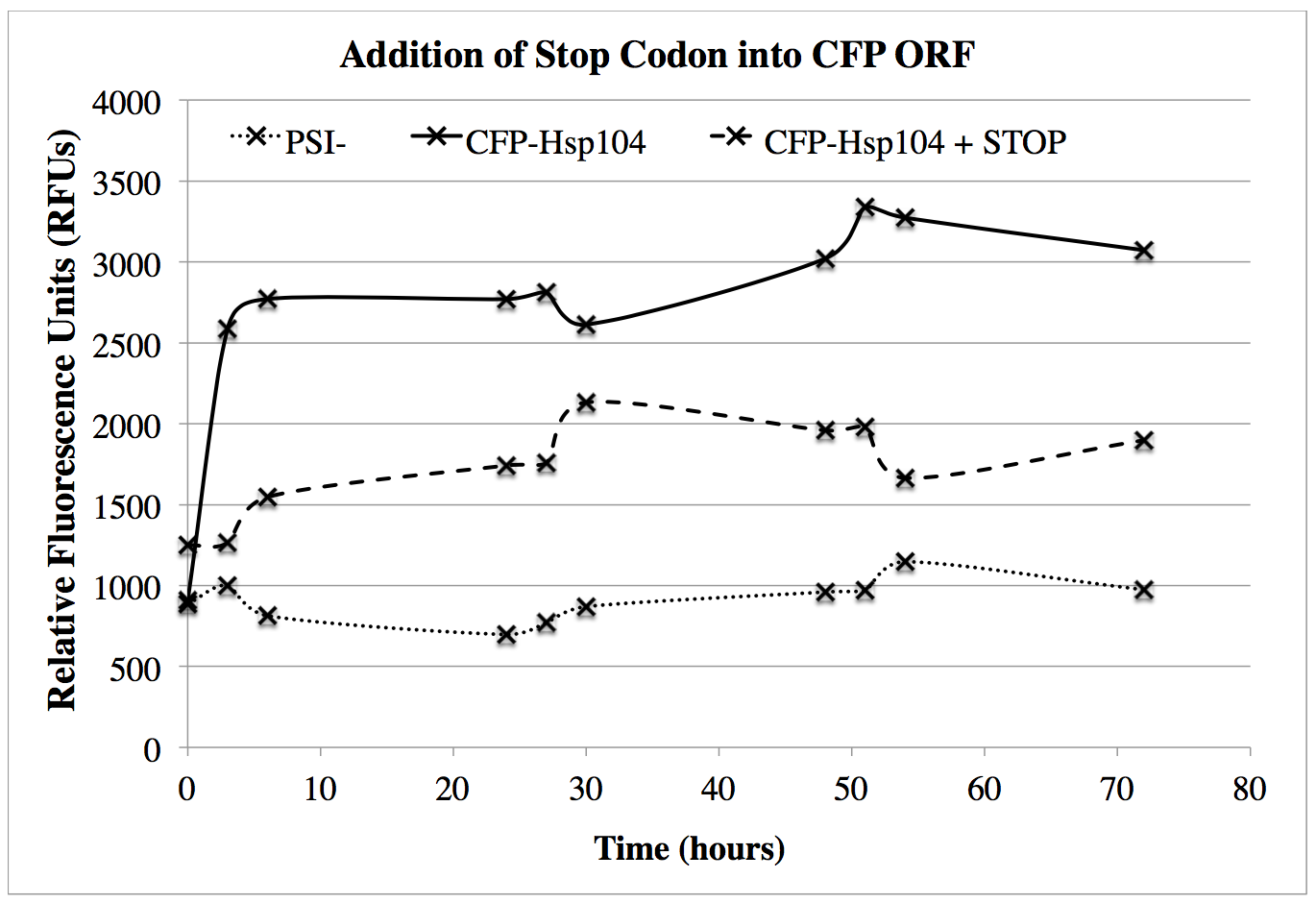 Figure 4: CFP fluorescence in yeast with Hsp104 and Hsp104 with a premature stop codon alongside the [PSI-] control

The fluorimetry data collected at several timepoints show that the [psi-] control yeast cell had relative fluorescence units (RFUs) of CFP remain constant at approximately 1000 over the 72 hours of testing. This can be attributed to [psi-] not having CFP natively and may be background noise.

The CFP-Hsp104 yeast cells over the 72-hour period show an exponential increase of CFP (for hours 0-6) followed by a plateau of approximately 2750 RFUs for the remaining time. When comparing this data to the [psi-] control, it is clear that the CFP signal levels are larger and therefore Hsp104 is also being overexpressed when the Gal1 promoter is being induced.

The CFP-Hsp104 with the stop codon in CFP also show a similar pattern to CFP-Hsp104. In the first 3 hours of growth, there is no difference in CFP expression levels. This is due to there being low levels of cells and the stop codon inserted in the CFP open reading frame which results in premature termination of translation. However, when comparing this time slot to the [psi-] control, the CFP levels are still higher (1250 RFUs vs 1000 RFUs) since there is still a basal level of stop-codon readthrough in the [psi-] state. However, when comparing the exponential growth time (0-6 hours) of CFP-Hsp104 and CFP-Hsp104 with a premature stop codon. The CFP-Hsp104 RFUs is higher since the CFP-Hsp104+ STOP has a premature stop codon which inhibits complete overexpression of CFP when Sup35 is completely functional and not in a prion state. After the 6-hour mark, overall there also is a plateau of RFUs for CFP-Hsp104+ STOP with levels at around 1750. This levels are lower than the 2750 RFUs of CFP+Hsp104 but higher than the 1000 RFUs of [psi-]. This again is due to the premature stop codon now allowing complete over expression as Sup35 removes the ribosome during translation at the stopcodon. Consequently, this also means that is a higher concentration of HSP104 in the CFP-Hsp104 when compared to CFP-Hsp104 with a stop codon.

CONTROL: The [PSI+] state is less severe when adding a premature stop codon to HSP104 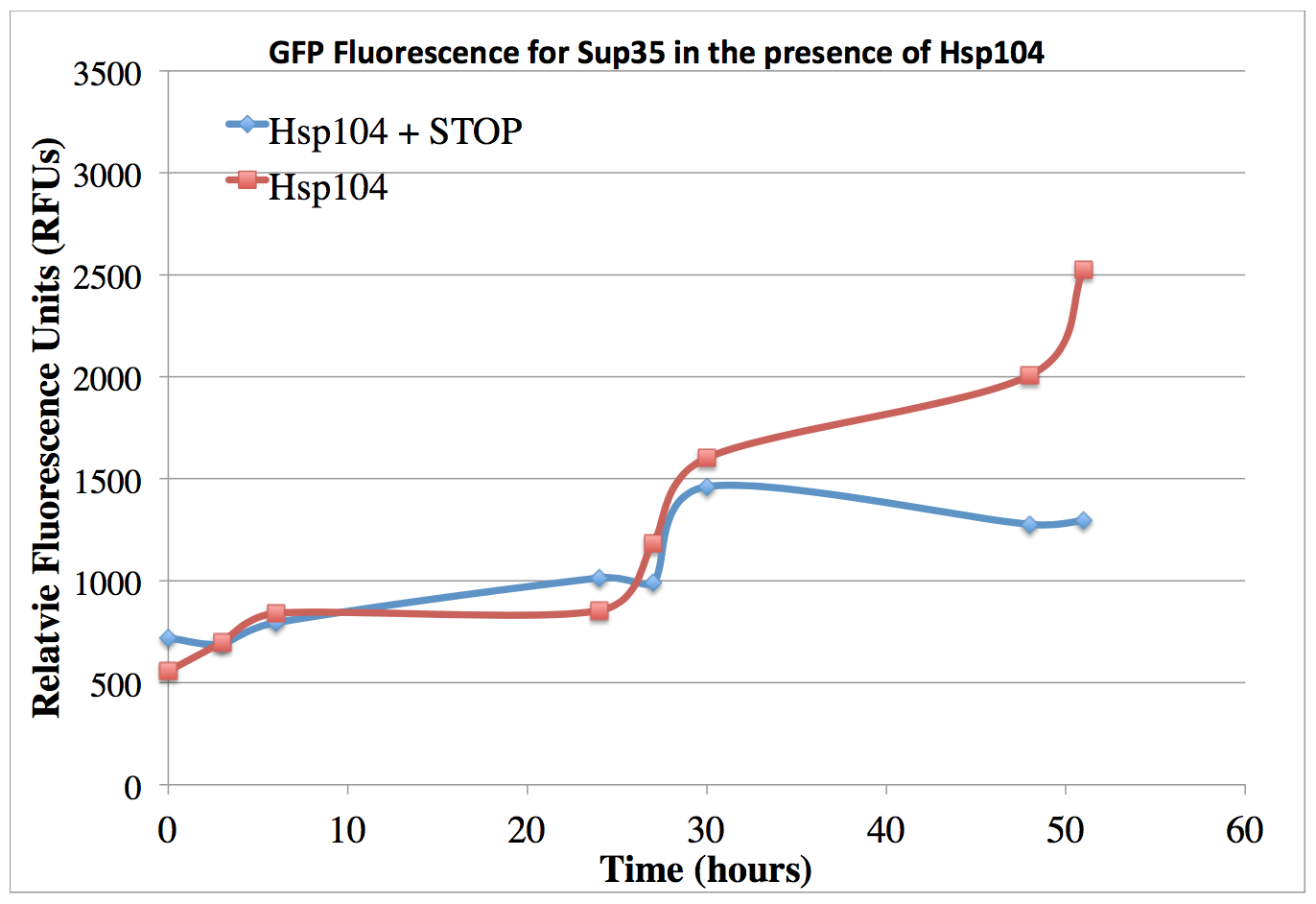 Prior to the induction of a [PSI+] state from [psi-] at the 28-hour mark, GFP levels of both Hsp104 and Hsp104 + STOP are relatively similar. This indicates that SUP35 levels are about equal in both states. However, after the introduction to the [PSI+] state, RFU levels increase for Hsp104 while decrease for Hsp104 + STOP. This data appears to agree with our hypothesis that Sup35 levels will increase in Hsp104 but decrease in the cells with Hsp104 that contain a stop codon in CFP. This shows that the [PSI+] state is less severe in yeast when adding a stop codon. This is because the probability of it reading through two stop codons as in the case of Hsp104 with a premature stop codon is even less likely than just one stop codon as in the cast with Hsp104.

CONTROL: There is an increase in fluorescence of CFP when yeast enter a [PSI+] state 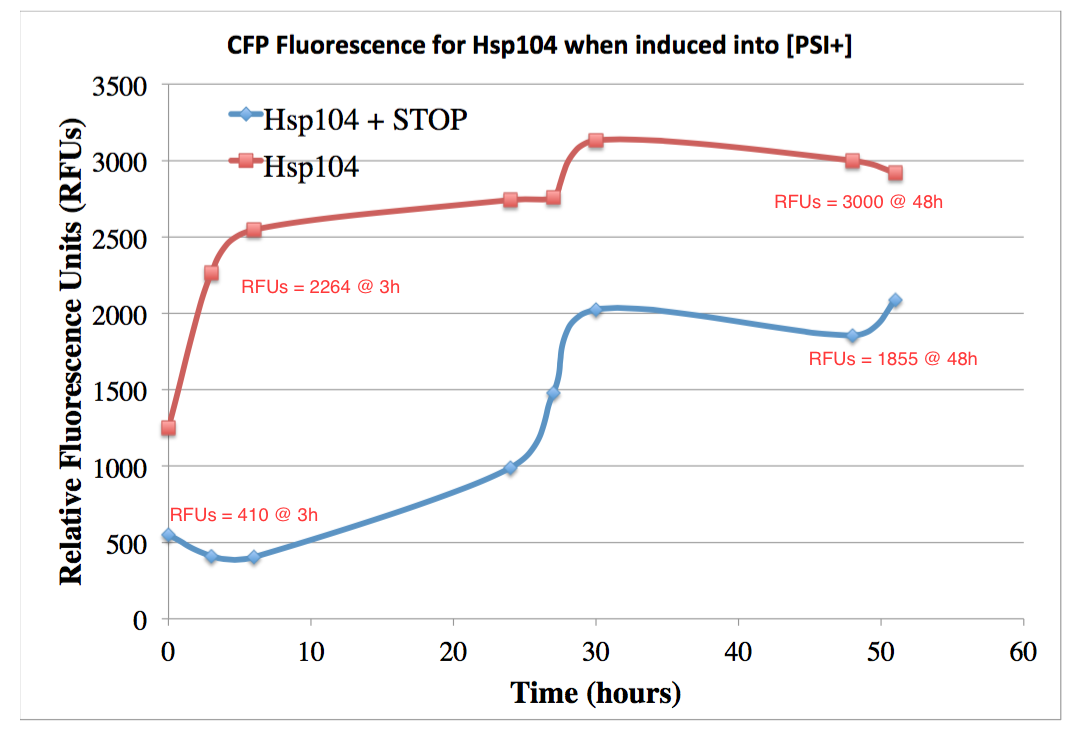 Figure 6: CFP fluorescence levels of Hsp104 and Hsp104 with a premature stop codon when induced in [PSI+]

To make sure that there is a Hsp104 response when going from a from a [psi-] to a [PSI+] state, the relative fluorescence of CFP must be compared. At the 3-hour time point ([psi-] state) for Hsp104 the CFP RFUs is 2264 while at the 48-hour time point ([PSI+] state),the RFU is 3000. This shows a 1.33 times increase in Hsp104 expression. On the other hand, Hsp104 + STOP at the 3-hour point has a RFUs of 410 and 1855 RFUs at 48 hours. This means that there was a 4.52 times increase of CFP when going from a [psi-] to a [PSI+] prion state in Hsp104 with a premature stop codon. This data shows that the response from Hsp104 is miniscule, while Hsp104 + STOP is in fact responding directly to the cell state. Another interesting point to note is that even during the response, Hsp104 + STOP does not reach the CFP levels of Hsp104. This indicates that there are still some correctly sup35 proteins preventing read-through even in a prion state.

CONTROL: The use of a crispr system

It is worth noting that the near 5 fold increase in read through of stop codons during a PSI+ state is an encouraging sign for the application of a CRISPR system. The two biggest concerns are the ability to produce sufficiently high levels of expression of a Cas protein and sufficiently different levels of expression between PSI- and PSI+ states. We have shown that we were able to express CFP at nearly 2/3 normal levels during a PSI+ state which is well within the range of standard promoters. Additionally, the strong difference in expression between states means there would be a great difference in the system's levels of knockout of a given protein.

A second concern with using CRISPR in yeast is that, due to the relatively short gene lengths, there may not be enough viable targets. Using Benchling, we ran a test of all NGG PAM sites on Hsp104 and found 212 viable sites, 37 of which had perfect off target scores (no off target matches) and 6 of which had efficiency scores greater than 70 (high binding efficiency). All together, this is a very encouraging sign for the feasibility of applying CRISPR to our system.