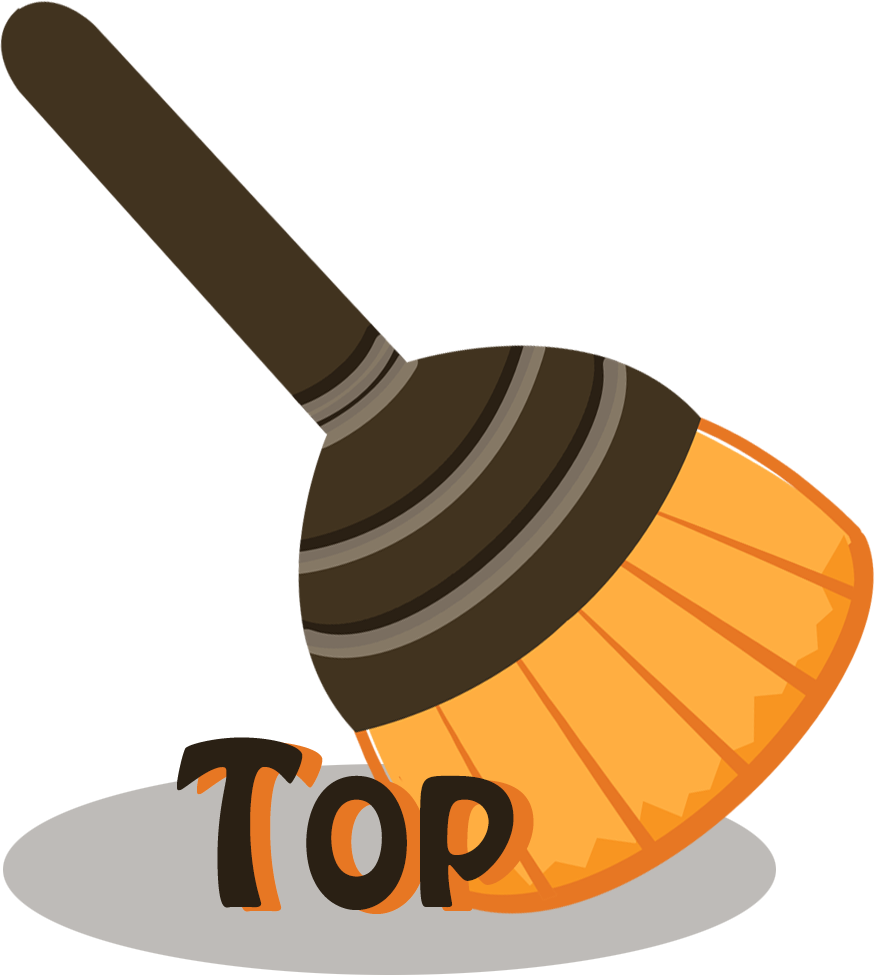 Inhibitor
Background
IDEA
In molecular genetics, inhibitor is a DNA or RNA binding protein based on its function that it can inhibits the expression of one or more genes by binding to the operator or associated silencers. A DNA binding repressor can recognize special operator gene, then it will block the attachment of RNA polymerase to the promoter or prevent RNA polymerase to move along the direction of DNA, thus it can stop genes from being transcripted into messenger RNA.
The RNA-binding repressor binds to the mRNA to prevent the translation. However, all is fair, this repression can also be relieved by some inducers. If an inducer, which can initiate the expression of gene , is present, it will interact with the inhibitor protein and detach it from the operator. RNA polymerase will have the chance to transcribe.
Corepressor is the molecule which can combined with inhibitor, helping it bind to the operator more tightly and repressing transcription. An inhibiter that binds with a corepressor is termed “aporepressor” or “inactive repressor”. One type of aporepressor is the trp repressor, an important metabolic protein.
The above mechanism of repression is a type of feedback mechanism because it only allows transcription to start if specific inducers are present.
Inhibitor protein is widely used in logical gene circuit construction, controlling the expression of special genes or important metabolic processes
Mechanism
We choose three types of inhibitor-promoter: LacIq-plac, CI-pR and TetR-ptet to regulate the threshold based on our need.
LacIq-pLac
LacI repressor is a DNA-binding protein which can inhibit lac promoter from expressing genes, which are relative to lactose metabolism( from expressing lactose metabolism relative genes). 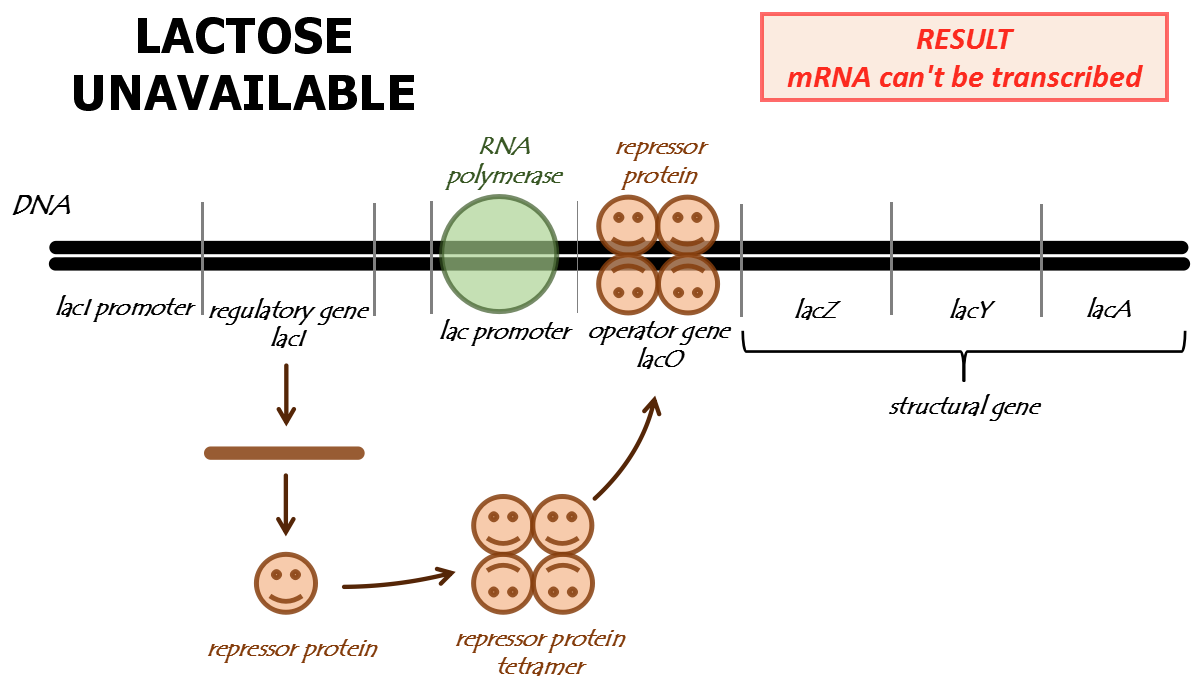 These genes are repressed when lactose is not available to the cell, ensuring that the bacterium only invests energy in the production of machinery necessary for uptake and utilization of lactose when lactose is present. 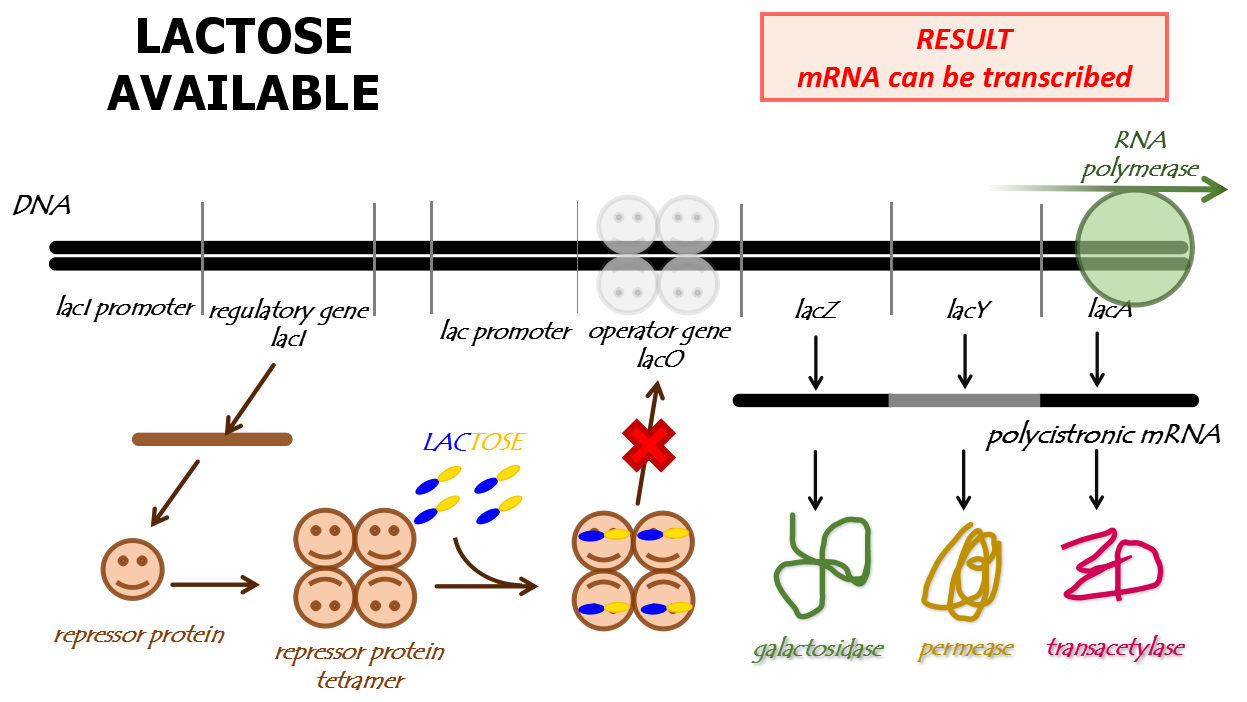 When lactose becomes available, it is converted into allolactose, which combines with the LacI and inhibits the LacI’s DNA binding ability. Loss of DNA binding by the lac repressor is required for transcriptional activation of the operon. LacIq is a mutation type of LacI which can express a lot of LacI inhibitor to repress the lac promoter completely and has a low or zero background expression levels. Thus using lacIq as inhibitor is a more efficient way to control the expression. Tac promoter is a functional hybrid promoter composed of different promoters from trp and lac operons and could only be regulated by lacI inhibitor.
CI-pR
CI inhibitor found in the phage lambda is a notable example of the level of control possible over gene expression by a very simple system. In the phage lambda, the lambda repressor is a self-assembling dimer also known as the CI protein. 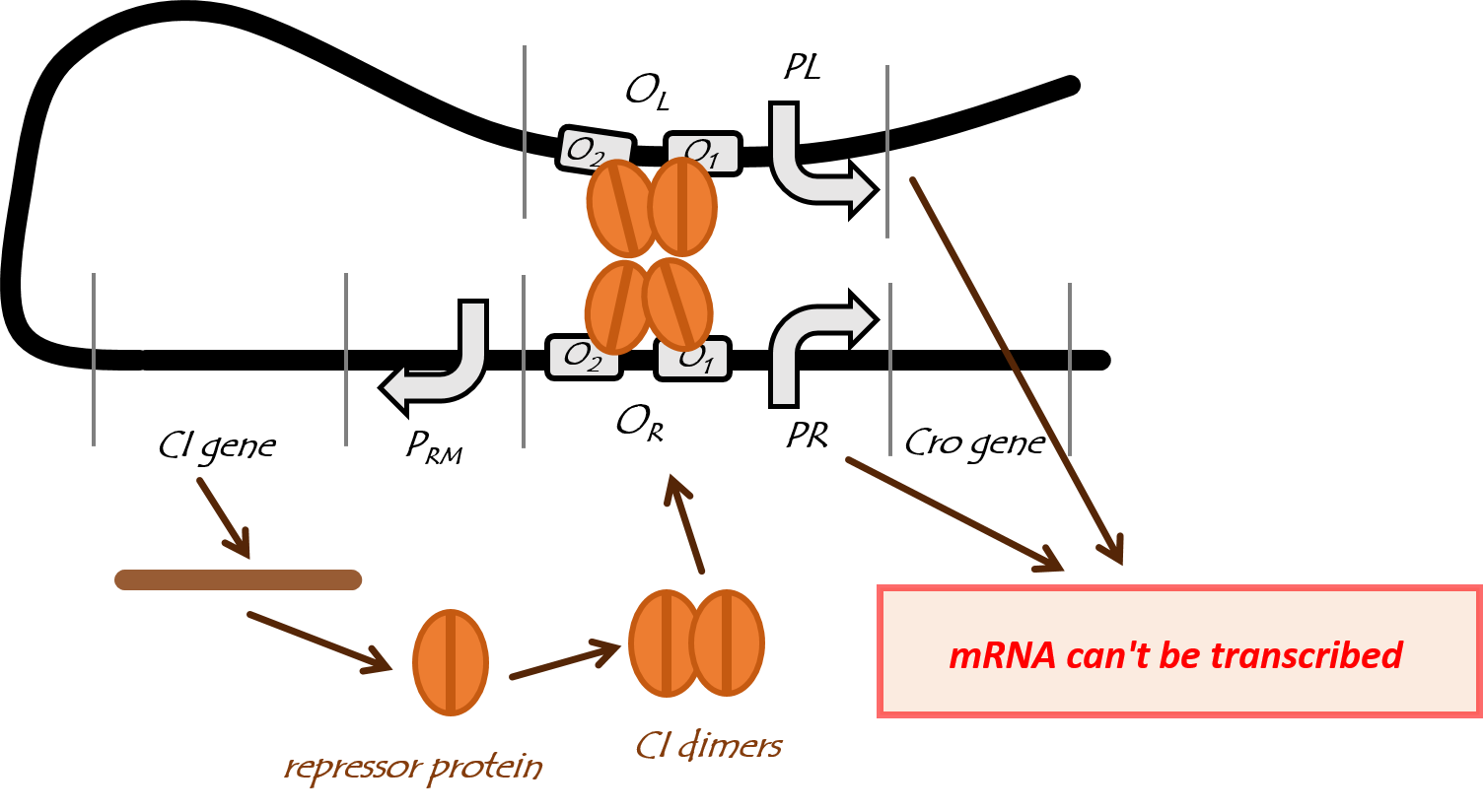 The key regulator in the λ genetic switch is the CI protein, which binds to the OR and OL regions of the λ genome to repress the lytic promoters during lysogeny. Cooperative binding of a pair of CI dimers at two of the three CI operators at OR (OR1 and OR2) represses PR, and similar binding at two of the three operators at OL (OL1 and OL2) represses the PL promoter. Binding of CI to OR2 also stimulates the intrinsically weak promoter for the cI gene, PRM, so that in the lysogenic state CI positively regulates its own synthesis and the presence of CI is maintained. Switching from lysogeny to lytic development, called lysogenic induction or prophage induction, occurs on activation of the host SOS system in response to DNA damage.
TetR-pTet
Tetracycline (tc) is a broad family of antibiotics to which bacteria have evolved resistance. 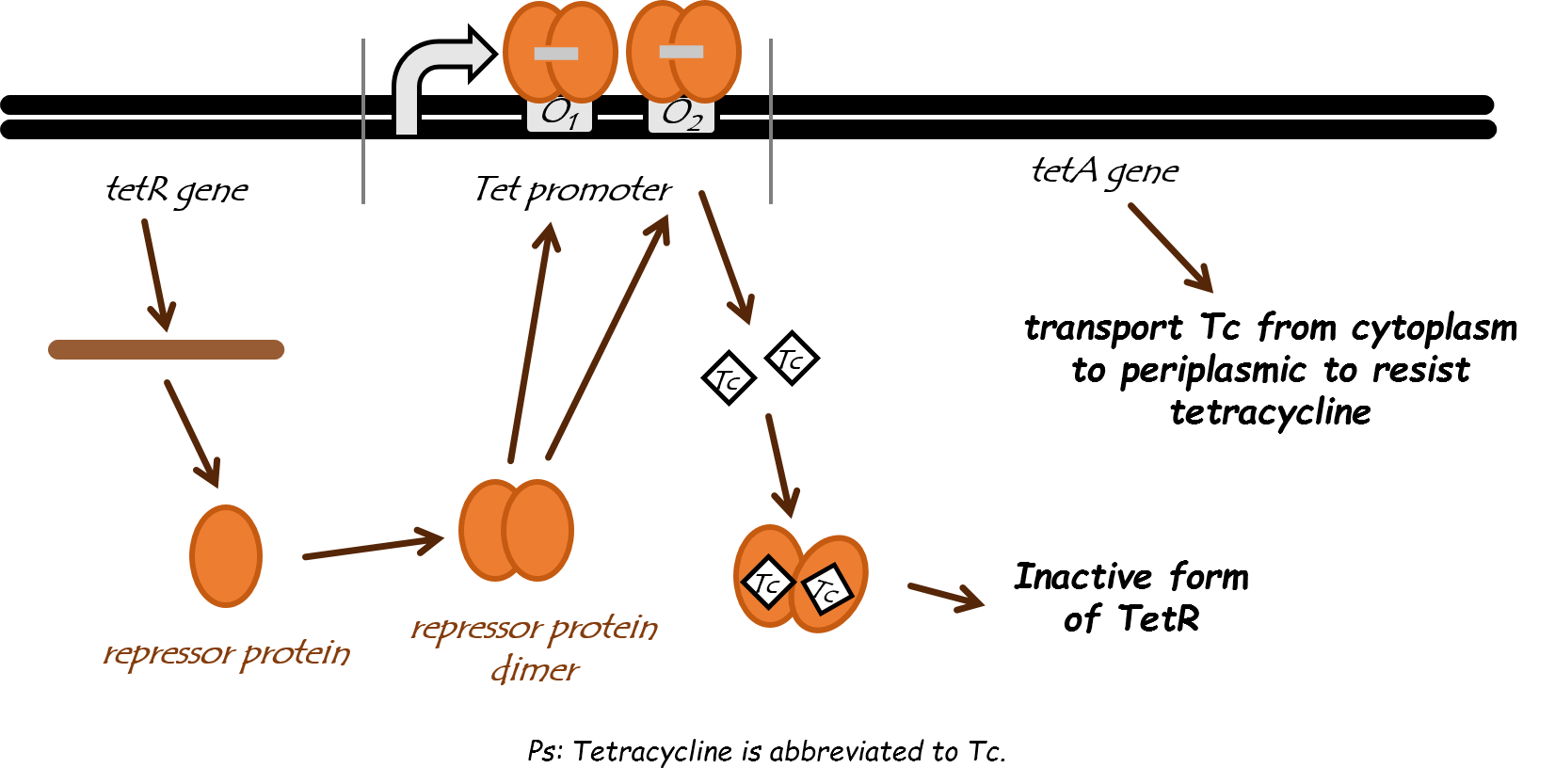 Tc normally kills bacteria by binding to the bacterial ribosome and halting protein synthesis. In Gram-negative bacteria, the expression of resistance to tetracycline (tc) gene is regulated by Tet Repressor Protein, call tetR. Regulation of expression of the ptet is mediated by Tet repressor, which binds to two operator (tetO) sites. TetR is used in artificially engineered gene regulatory networks because of its capacity for fine regulation. In the absence of tc, basal expression of TetR is very low, but expression rises sharply in the presence of even a minute quantity of tc through a positive feedback mechanism.
Application in our project
In order to sense the number of plasmids, we use different kinds of inhibitor as the signal. In host cells, the concentration of inhibitor increases while plasmids’ number rises. Once the number of plasmids changes, inhibitor will change accordingly. If the concentration of inhibitor reach the threshold, the in-promoter’s state will be turned in the same time. 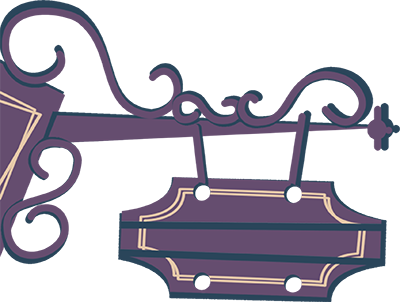