Boolean logic is largely used in computer science but can be applied to various other disciplines. It regulates the occurrence of desired outcomes by stipulating necessary inputs. One operation from this system is AND. In its simplest form, an AND gate requires two simultaneous inputs in order for an output to be produced. An example of this operation is a driver moving a car forward. For this situation, the engine must be on AND the gearbox must be in drive before pushing the gas pedal will allow the car to move forward.

Adhering to Boolean logic, our goal is to create a modular genetic circuit in the cyanobacterium Synechocystis sp. PCC 6803 to optimize expression of a desired product. We decided to produce biofuels. Additionally, we want to eliminate the need for expensive induction molecules such as IPTG. To accomplish these goals, we selected two conditions to implement in an AND gate and regulate gene expression: light and a quorum of cells. These conditions make use of natural mechanisms of Synechocystis and the quorum sensing mechanism from Vibrio fischeri.

Synechocystis is a photosynthetic bacterium which has the ability to react diurnally (Labiosa 2006, Beck 2014), suggesting that it is able to change central metabolic flux following a circadian clock. In fact, studies using constant light found that about 2% to 9% of the organism's genes change following a circadian rhythm (Kucho 2005). Using data collected by Beck et al. about the relative abundance of transcripts during light-dark cycles, we identified potential light-induced promoters from Synechocystis. Allison Zimont assisted us in narrowing the options down to two promoters: sll0517 and ssl1633.

According to Merriam-Webster, a quorum is defined as ”the smallest number of people who must be present at a meeting in order for decisions to be made.” For our project, we are construing a quorum as the lowest density cell culture at which a product can be optimally produced. Quorum sensing is a communication mechanism bacteria may use to assess population density before allowing gene expression to occur. The bacterium Vibrio fischeri uses quorum sensing to provide bioluminescence for the bobtail squid. Bioluminosity isn’t easily visible until the V. fischeri population reaches a certain density, so to conserve resources, the population will act as a group and drive gene expression only when a quorum is met (Waters and Bassler 2005). Similarly, we want to optimize production in Synechocystis . We chose to implement the luxR-luxI intergenic region from V. fischeri strain MJ1S because its promoters and RBS result in considerably high expression of bioluminescence (Bose et al. 2011). This system allows us to create an autoinduced system.

In order to create an AND gate, we adopted the split T7 RNA polymerase system (Shis and Bennett, 2013). They found that the gene sequence of polymerase from T7 bacteriophage can be split into two fragments. Upon expression, the N-terminal and C-terminal peptides recombine into a functional RNA polymerase. 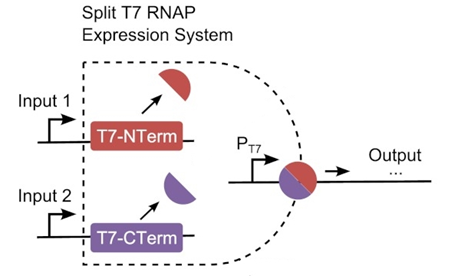 Our intention was for this AND gate to be modular, able to be used to express any product in Synechocystis. However, we needed to choose one product to focus on as our proof of concept. We were able to finalize this decision mainly due to what we learned in our outreach activity this summer. Finding most people were willing to support synthetic biology when it pertained to creating biofuels over any medicinal or food products, we decided to choose biofuels as our target product.

Biofuel production is an increasingly growing field. According to the Colorado River Commission of Nevada, fossil fuels will run out by 2100. Currently, 80% energy needs are supplied by fossil fuels (Demirbas and Demirbas, 2011). We decided that our organism would be perfect for biofuel production. Synechocystis fits into the 3rd generation of biofuels; it is not a land crop, so it will not take away valuable land for food production such as fuels made from corn or sorghum. In addition, our organism naturally produces heptadecane which can be used directly as a biofuel. The relevant genes are sllr0208 and sllr0209. 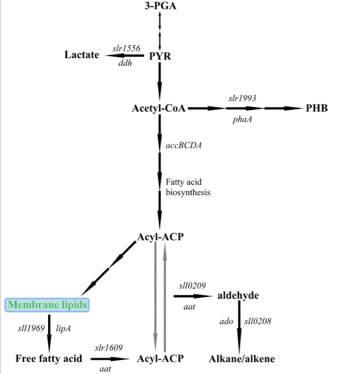 
A previous iGEM team, Utah State 2011, wanted to make biofuels in cyanobacteria. However, they only looked at different promoters, trying to find a stronger one for production. We decided to approach our project differently aside from building the logic gate. Wang et al. 2013 found that by introducing another copy of the alkane genes into the organism, they were able to obtain 1.1% heptadecane in dry cell weight compared to wild type 0.14%.

For the first portion of our AND gate, we placed expression of the N-terminal T7 RNA polymerase under the control of the luxR-luxI quorum sensing system. At the second portion, we placed the C-terminal T7 RNA polymerase under the control of a light induced promoter. For all the RBS, we chose SigA, as it is native to our organism. Finally, we placed the alkene genes (sllr0208 and sllr0209) behind the T7 promoter.

Improving on a Previous BioBrick and Transforming into Synechocystis

The challenge in working with Synechocystis is that very few plasmids replicate in the organism. Instead, researchers take advantage of the fact that they are naturally competent and have very active recombinases. This allows us to insert new DNA sequences into the genome by homologous recombination.

A previous team, UC Chile 2012, created a transformation vector following this very concept. A gene of interest can be recombined into a chosen neutral site along with a Kanamycin resistance gene. However, we could not use it because the part 2012 was not released due to an illegal EcoRI restriction site. So, we set out to create our own transformation vector.

Based on a transformation protocol devised by Cheah et al. 2012, we improved on the previous recombination vector. The neutral region we chose (slr0168), does not have any illegal restriction sites. Also, the transformation method creates a markerless system which allows additional cloning to be much easier, eliminating the need for introducing another selection marker. We first needed to insert mazF, a protein synthesis inhibitor, and the Kanamycin resistance gene under the control of a nickel inducible promoter. Then, we transform the Synechocystis with our CyanoLogic gate housed in the transformation vector. As we plate the cyanobacteria on agar plates with nickel, they are placed under selective pressure and segregate across all copies of their chromosome. The process can take up to three weeks. At the end, CyanoLogic is in every chromosome while mazF and the Kanamycin resistance gene are eliminated. The parts needed for the two step transformation for genome integration are BBa_K1945001 and BBa_K1945002.