Fluorescence Detection Inside the Diagnostic Device

A major subject of our endeavours was the creation of a pragmatic, reliable and safe, especially biosafe, application of our genetically engineered machine. Those criteria are a challenging approach towards a real life product and therefore our on-chip solution needs to be capable of overcoming the problems of real life application. Taking care of the biosafety aspects was a key proposal of our project that we did not want to lack and thus implemented it into our concept since the very beginning. We were clear about the expectations that our solution was needed to fulfill in order to be considered soberly realistic. Main aspects and demands that we made include:

Many of these aspects are met by the nature and design of the solution. However, there are critical points which require testing and validation. Generally two aspects seemed crucial to us:

Since the bacteria have to be stored inside the diagnostic chip in encapsulated form and storage should possibly be a long term matter, the living sensors need to survive this state. To check for this ability we lysed bacteria containing capsules with citric acid. Upon examination by light microscopy of the resulting solution, the released bacteria still showed active motility. An increased OD600 after one hour of reculturing provides proof that encapsulation is not fatal to the cells. Upon confirmation of the viability of the cells inside the capsules it is suggestible that proliferation of cells inside the capsules may occur, causing the cracking and release of bacteria. We incubated the encapsulated bacteria in LB medium free of selective antibiotics and measured the OD600 hourly for several hours without an indication of increase in cell numbers. This also applies for manually broken capsules. However, tearing apart the capsules requires brute force even for larger capsules due to their high elasticity, therefore we are certain that unintentional release of the bacteria from the capsules due to their breakage can not occur during standard daily use, because of our daily experience with their handling. This already sounds reassuring, but it is not enough of proof as part of a mature product. More than the survival of the act of encapsulation is required, since the capsule holding chips need to be shipped mainly across the globe. A minimum requirement for such a travel is its ability to survive freezing storage. To make sure of that we froze the capsules in glycerol and also a mixture of glycerol and LB medium. After one week we defrosted, lysed and cultivated them. The day after, the bacteria had reached an OD600 = 2.4 supporting that the bacteria can survive the whole logistical procedure. Another day after, examination under the light microscope showed vitality of the cells.In addition to those quantitative testing we performed propidium iodide (PI) staining and thereafter fluorescence activated cell sorting (FACS) to determine absolute surviving percentages. PI cell staining was implemented to quantify the percentage of cells surviving the encapsulation and cultivation in capsules in either 37°C (tropical condition) and 4°C (storage condition). Another encapsulated sample was frozen at -20°C and as well analyzed using PI staining. Due to the FACS results shown below, we can postulate that our JW-cells do not take critical damage from encapsulation. However cultivating the encapsulated cells seems to be more complicated than our qualitative testing carried out before may have had us suggesting. 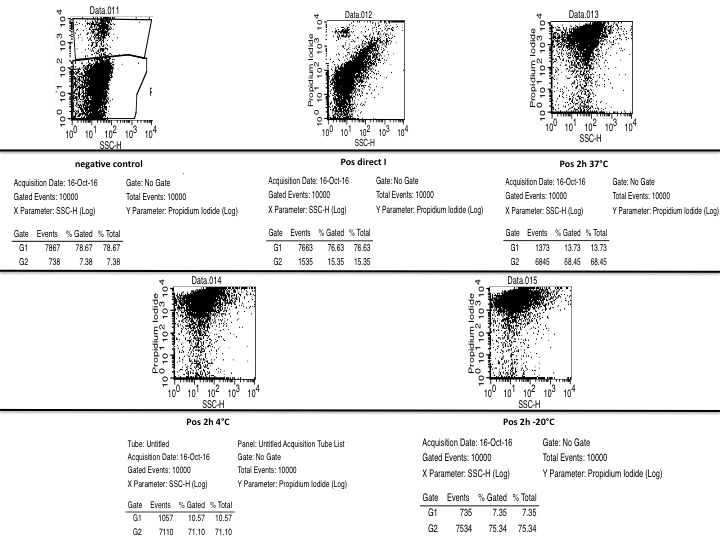 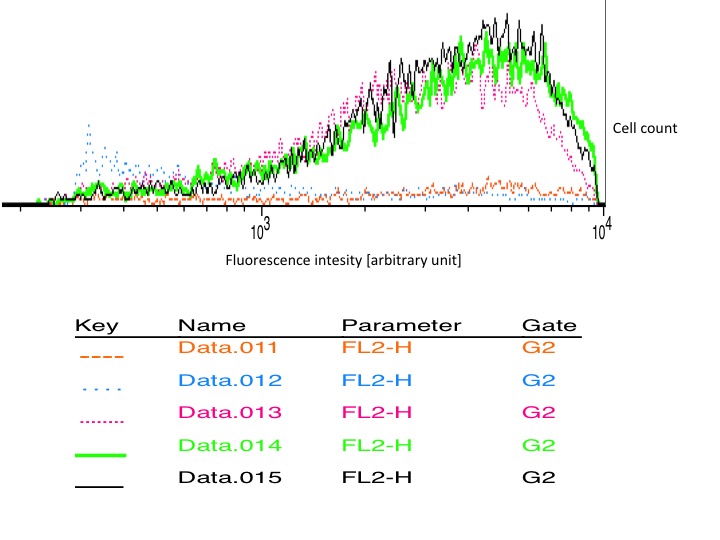 FACS results revealed that about 10% of cells were vital after incubation in LB medium for two hours at 37°C . Interestingly the sample cultivated for two hours at 4°C showed the same survival rate, suggesting that further testing of different cultivation medium is necessary to increase cell viability. Still our results prove the survival of encapsulated JW-cells in our alginate capsules and therefore contributing to the proof of concept. After ensuring that our bacteria can possibly survive the trip to a distant user, our chip has to allow readout of the quantities which we use to indicate a potential diagnosis. This quantity is the fluorescence signal of GFP at 509 nm wavelength. The fluorescence of the bacteria needs to be expressed strong enough to be simply visible in the absence of daylight and after filtering away the excitation spectrum. The darkness can be provided by the chamber of our lab-in-phone device which also hosts an intensively emitting blue diode for excitation. The integrated filter does not allow the excitation wavelengths to pass. Measuring the fluorescence of the bacteria contained in our chip showed the result below for an exposure time of 200 ms. 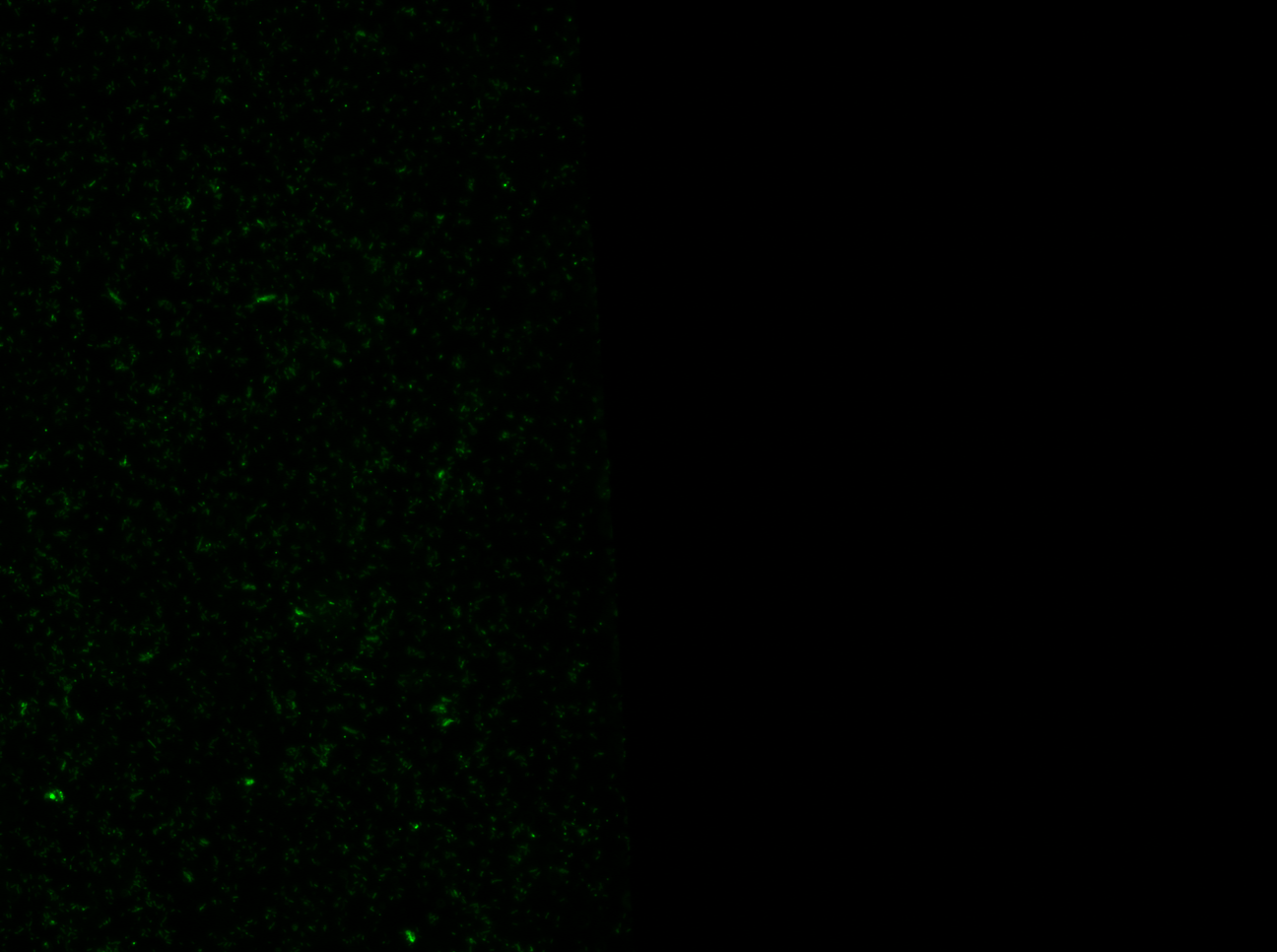 The image shows the fluorescence of the cells inside a diagnosis chamber of the chip which passes about 3 mm of PDMS next to plain PDMS which exhibits no observable signal. Since inside the lab-in-phone device an arbitrary exposure time can be chosen to measure significant amounts of light. An image of such a situation using an exposure time of 5000 ms is depicted below. 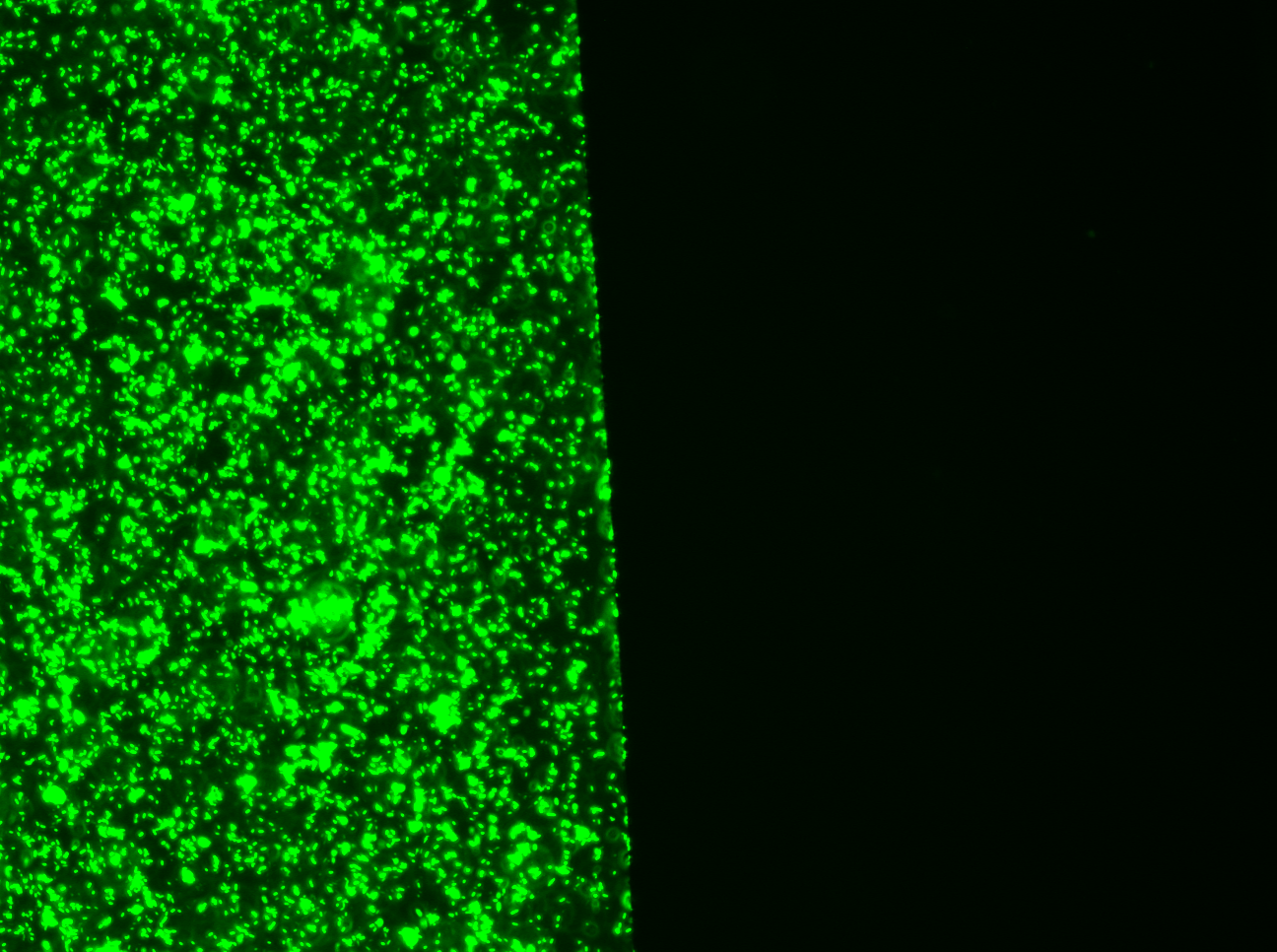 This fluorescence signal can be rendered strong enough for readout, still noting the lack of PDMS-intrinsic fluorescence. The application of the chip and it’s real-time readout inside the lab-in-phone device renders it handy in our opinion.