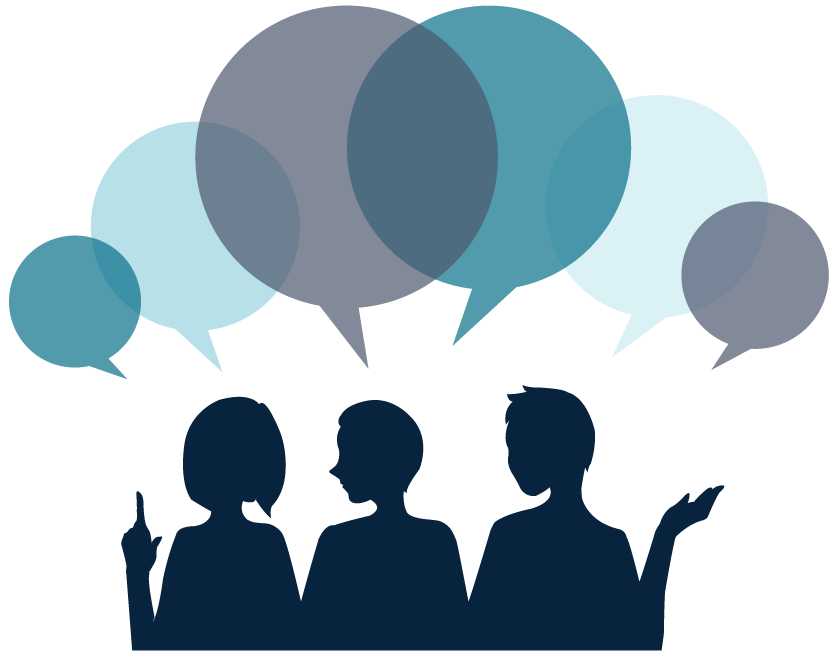 When we brainstormed our ideas for this year’s project, we wanted to contribute to the society with synthetic biology by applying them to therapeutics and health. This was the basis for the development of Noro-catcher. This project ultimately aims to administrate recombinant organisms inside the patient digestive system for its application. Through our project, we had to face the question that was fostered by our team’s continuous history of engaging with the general public: How far does the general public believe in genetic engineering, and, for example, would they be willing to entrust their health to recombinant organisms? One way around this question is of course to make our device as safe as possible. We tried this approach by adding a domain to swiftly remove the recombinant organisms, addressing the issue.

We continued our HP activities and had more opportunities to meet people from different walks of life. From such experiences, we began to understand that these fears in the general public arise from lack of knowledge on the matter. By educating them to increase their knowledge of genetic engineering, would people’s fears be soothed? In other words, would providing the general public with adequate knowledge of genetic engineering improve their perception of our activities? In order to test this hypothesis, we conducted a student-teacher workshop and provided an informational seminar on genetic engineering.

From the feedback obtained after the seminar, it was shown that education is very effective in reducing fears in students about genetic engineering. It suggests just two hours of informative lecture radically reduced their fears, and drastically improved their opinion. Their stance against genetic engineering swung far more than we had expected.

Thus our hypothesis was proven: to educate the public on science reduces their fears.

Our immediate and rather optimistic conclusion was however upturned. After discussing and analyzing the results within our team, doubts began to arise that our methods might have significant flaws.

As students of synthetic biology, we cannot claim that the danger from the usage of recombinant organisms in human body systems is insignificantly small. However, students who listened to our informative lectures expressed a surprisingly accepting stance on recombinant organisms. It might be that this indicates a major flaw in our methods and analysis.

As we continued our analysis, we came across a deeply relevant psychological effect.

When applying this view on our human practice project, it suggests that it makes people prone to overestimation despite their incomplete knowledge of synthetic biology, and hinders proper risk assessment of the application of genetic engineering.

Engage scientists as well as non-scientists

Below are our team’s engagements, including only the ones from this year

1-1) Poster session in November Festival and May Festival

Raise the general public’s recognition of genetic engineering and iGEM, and promote understanding for our project

We performed a poster session in two of the most prestigious school festivals of Japan, Kyoto-U’s November Festival and U-Tokyo’s May Festival, where many people visit.

-Participants' point of interest in our project widely differs

-Technical stories cannot be communicated easily. If we explain starting with the conclusion, people tend to see our points, but we cannot know for sure how well they understood

-Some asked whether ingesting recombinant organisms is OK

-Many congratulated us for our research well beyond our position as undergraduate students, but there seemed to be low expectations for the practicality of our projects. 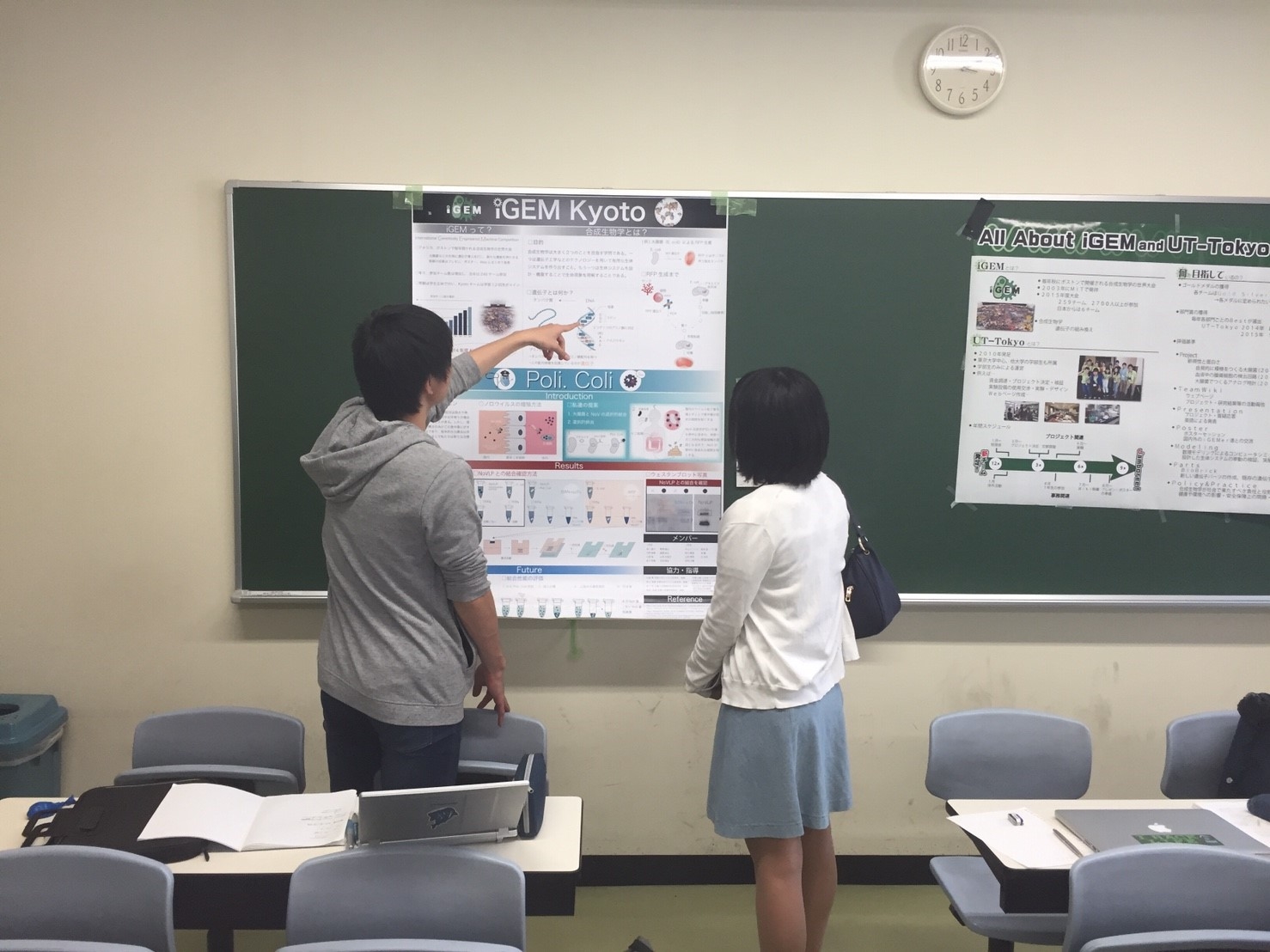 Fig1: iGEMKyoto's team member presenting our project to visitors of the University of Tokyo's school festival 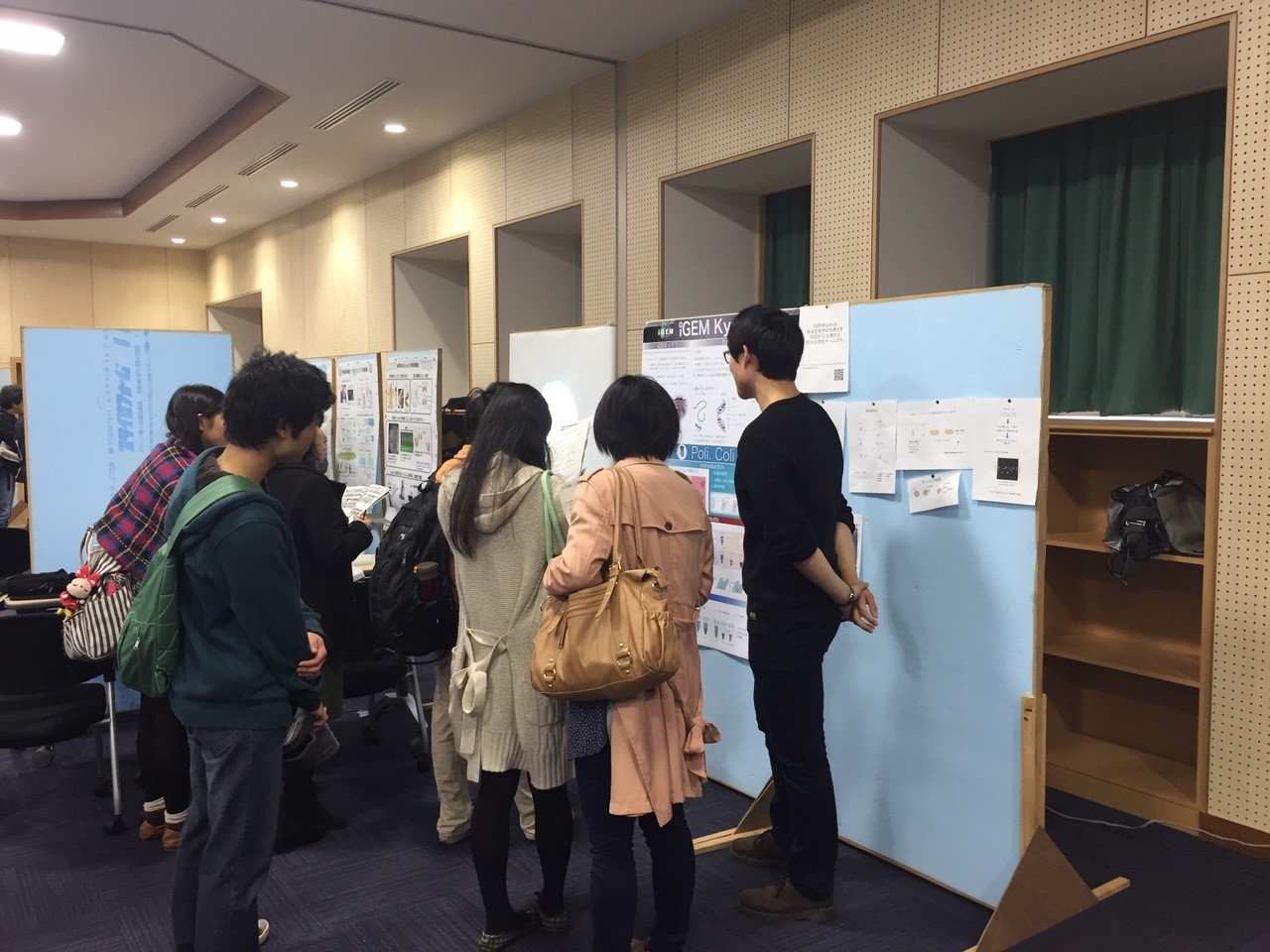 Exchanging ideas and opinions with other iGEM teams, and with Genetics Society of Japan members (Who usually are not familiar with iGEM or synthetic biology)

As one of the workshops in the meeting, we presented our project in a special introduction session for iGEM teams

-We received valuable advice on our study and presentation skills 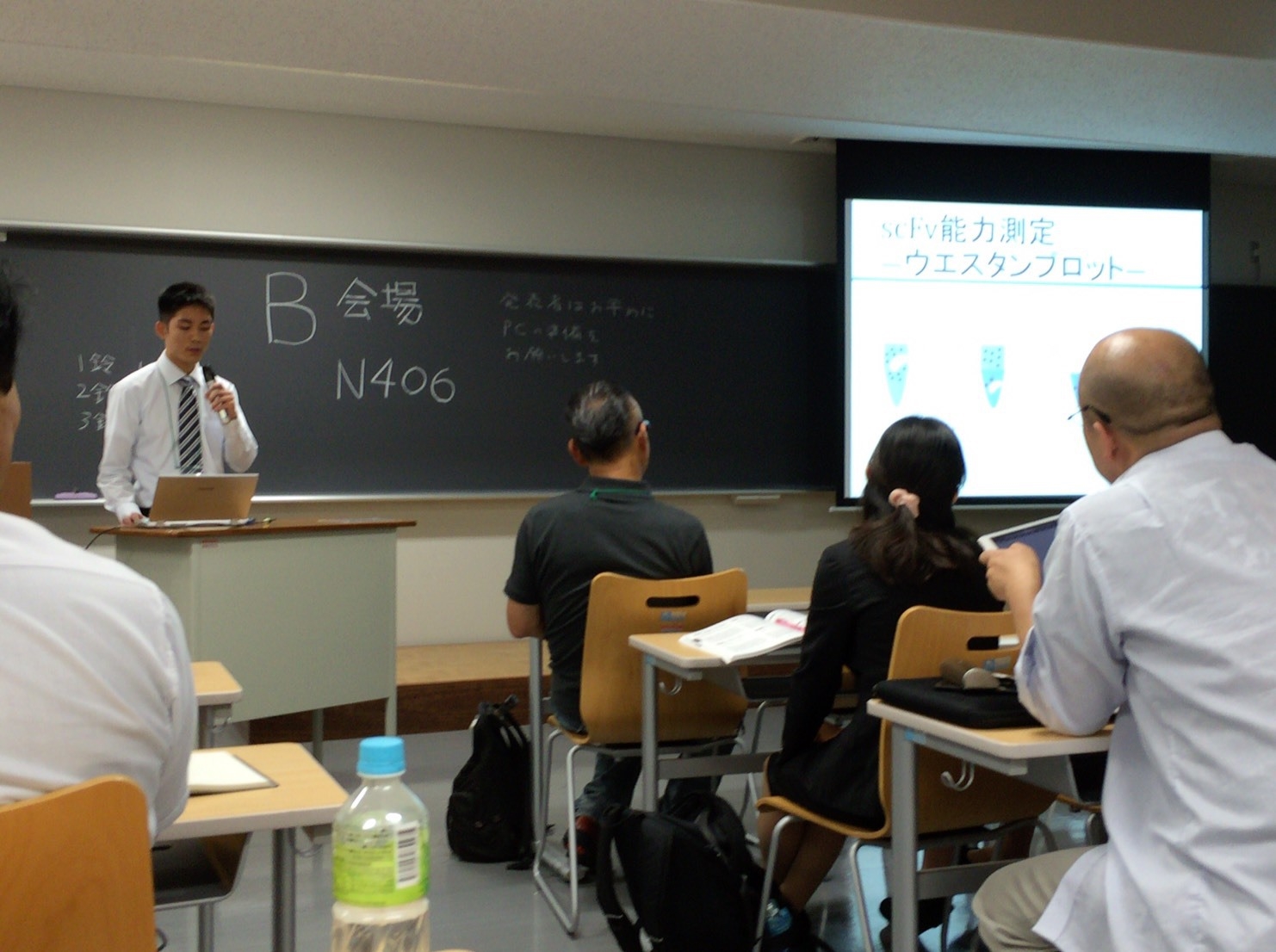 Fig3 Presenting our projects to biologists in the 88th Annual Meeting of the Genetics Society of Japan.

Through Kyoto University’s crowdfunding, we were given the opportunity to introduce our project to a wide range of people. Through various media, we engaged in a wide range of activities to raise recognition for genetic engineering and synthetic biology. For example, our project was reported by a national newspaper. 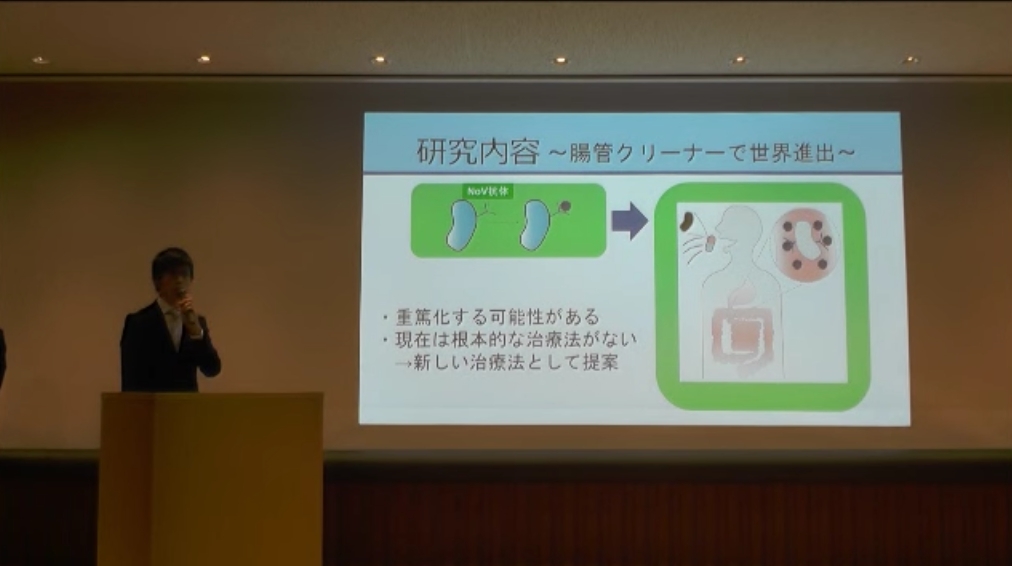 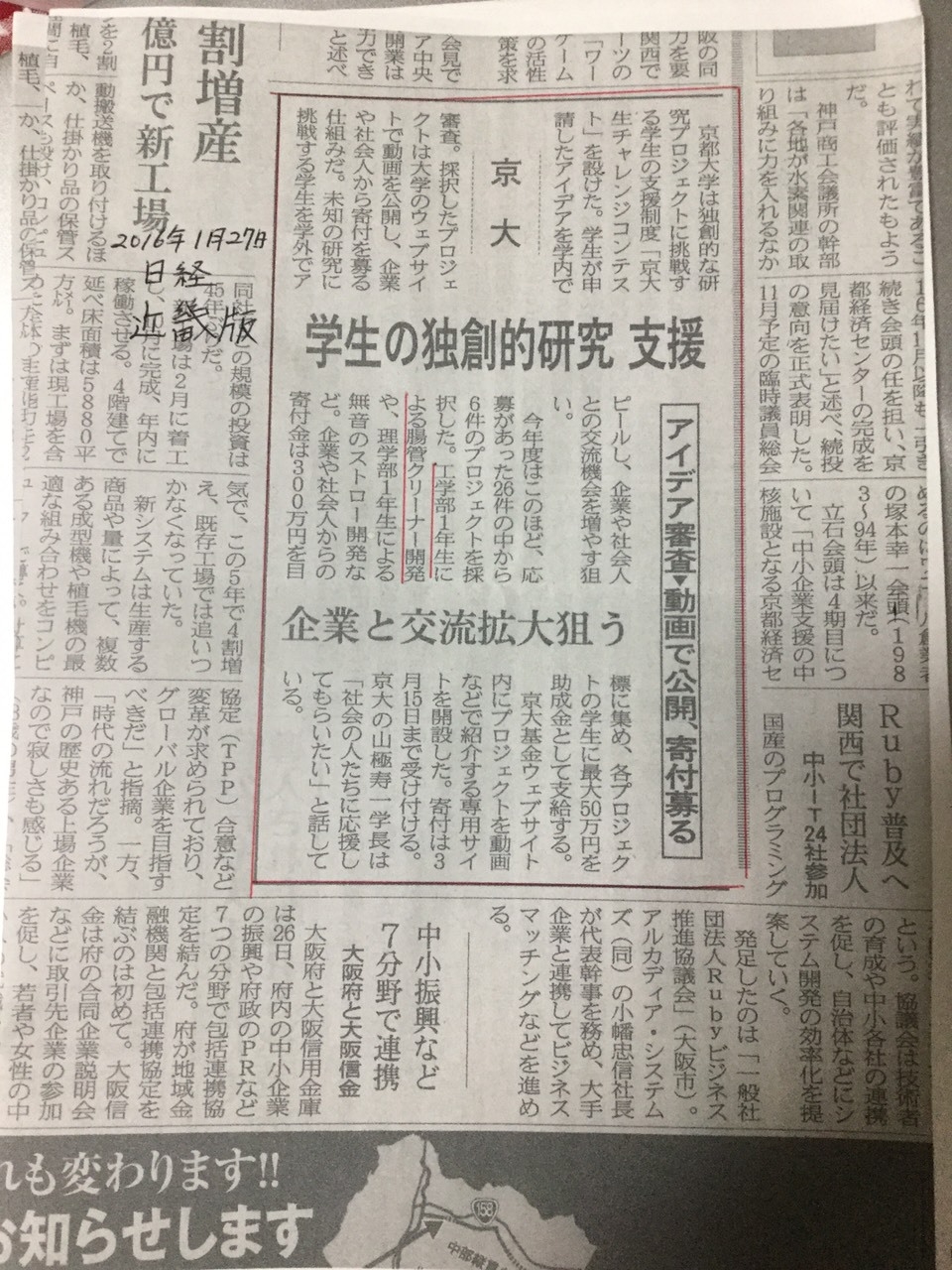 Fig5 Our project was reported by a national newspaper through SPEC

1-4) What we have learned from these events

We learned innumerous things from these experiences. What struck our team members the most was how much the general public’s knowledge of genetic engineering varied. There were people with considerable knowledge on the matter, even as far as CRISPR, while others lacked the most basic knowledge such as the functions of DNA. And those with little knowledge held an abstract concern for genetic engineering, as they only know its name. In order for our biodevice to be realized, we need to address their concerns and gain their trust.

What We Have Done

We have done the following to address the deep-rooted concerns of the people for genetic engineering that we have come to face.

First of all, we tried to improve our project design by the addition of a domain to increase safety of our biodevice.

The Noro-catcher we developed binds to Norovirus(NoV) to combat NoV infections. We aim to apply this biodevice to the removal of the NoV from the intestinal system by orally administrating them. We plan to use sterilized Noro-catcher to be safer, but we still anticipated a strong resistance to its usage as the patient is essentially “eating” recombinant organisms. As noted above, we found that the general public fears genetic engineering, and we wanted to address their concerns by introducing safe-usage mechanisms that physically remove our Noro-catcher from human digestive systems. Visit our project page for additional details.

In order to test the hypothesis that the concerns people hold for genetic engineering arises from the lack of knowledge on the matter, we held an informative lecture/discussion and analyzed the feedbacks submitted from the participants. 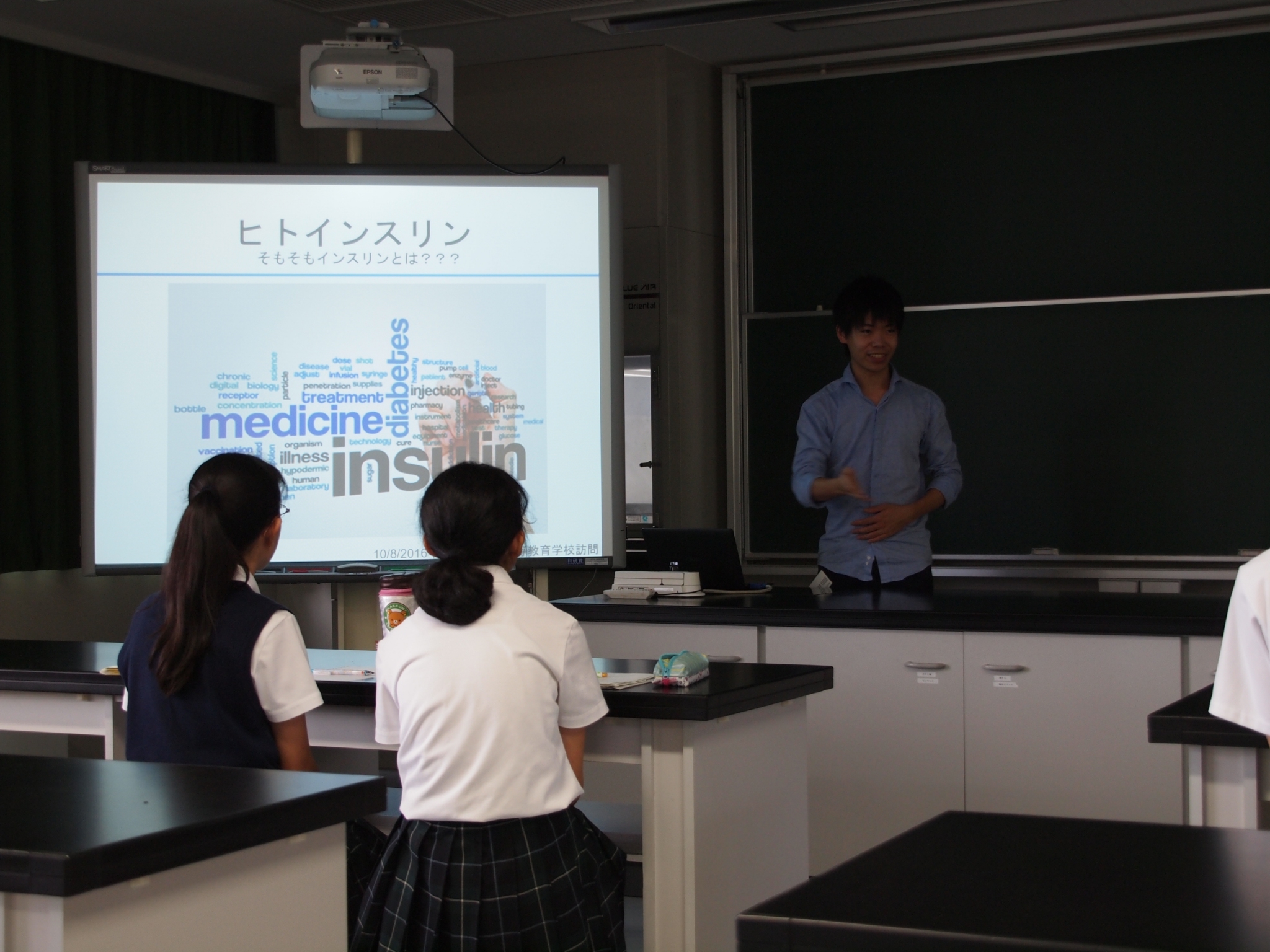 We conducted a survey before our lectures to 68 students. As seen clearly from Fig7, from oral administration to detection, the students' resistance to recombinant organism application increased with the level of proximity the user must be with the recombinant organisms. This was as expected.

Because of a typhoon, only four participated in the informative lectures and feedbacks. Results are shown below.

Do you think the lecture today would help you assess genetic engineering in your daily life?

Three out of four answered “Strongly helps” and one answered “Helps”

Even though we did anticipate a more welcoming stance than feedforward, the actual results far exceeded our expectation, with all of the participants expressing extremely welcoming stance towards genetic engineering.

In order to compare with the feedforward results, we also asked the four feedback participants “How has your stance on genetic engineering changed before and after the workshop?” The result matched the feedforward results, with two out of four expressing concerns for recombinants organisms at first. After the workshop, all four answered that they can accept all of the oral administration/prevention/detection application of the biodivice, which is a dramatic shift in their opinion. 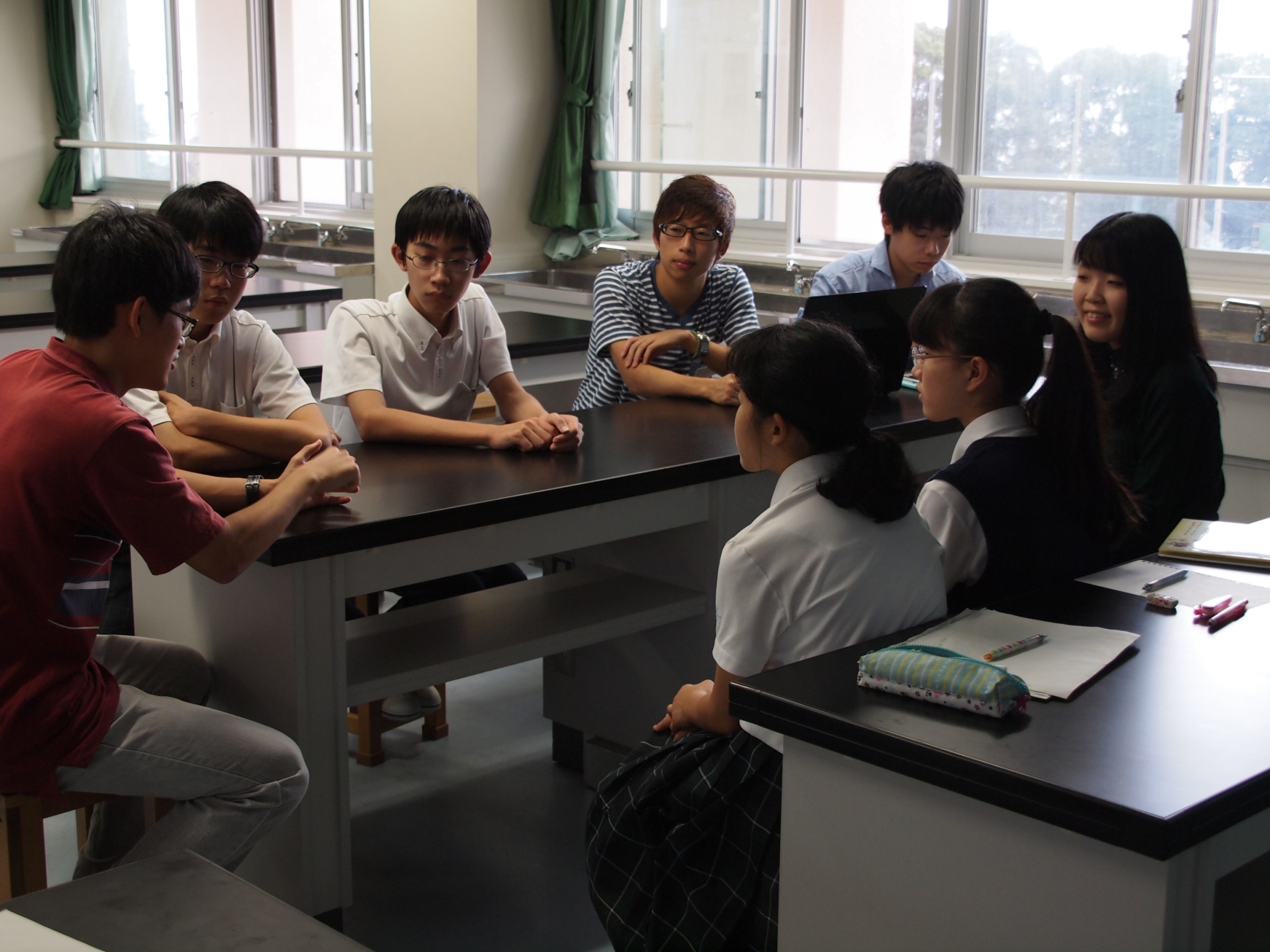 We contacted an expert on risk communication, pedagogy and psychology for advice on the analysis of our HP activity. We found three additional points of concern.

As the participants to our lecture/workshop were limited in number, we could only speculate on these points, but our finding in these surveys still holds significance in iGEM teams' future Human Practice activities.

Based on our hypothesis that we may be able to improve public perception on genetic engineering, we held a lecture/discussion workshop on genetic engineering. The results were drastic. Even though the number of students were not many, we were able to affect the students’ opinions as all answered they can accept the usage of recombinant organisms. We thus proved our hypothesis. However, new concerns arose in that we may have given the students overconfidence in synthetic biology by only giving them partial knowledge on the matter.

There have been numerous studies conducted on this issue, but they have yet to agree on an universal solution. iGEM teams, however, face this problem every time they engage the general public, usually with only limited knowledge on genetic engineering. We hope to discuss this topic with other iGEM teams, to learn best practices and experiences about improving public perceptions on synthetic biology.