Achieving the aim of long-term space resides and interstellar travel is a dream of mankind for a long time. Manned space flight only reached the moon from the time when the first human rocket was launched. From 1968 the release of "2001 space roaming", so far, most of the ideas in the film have been realized, except for the space roaming. Designing the travel plans to go to the moon and Mars or even further place is very different. Astronauts can easily obtain a variety of supplies, including food, water and oxygen generators, and achieve the circulation of the waste.It is only performing short-term tasks or in orbit on the International Space Station. Just open loop systems can support life.But as for inter-star long-term travel, it is completely different. 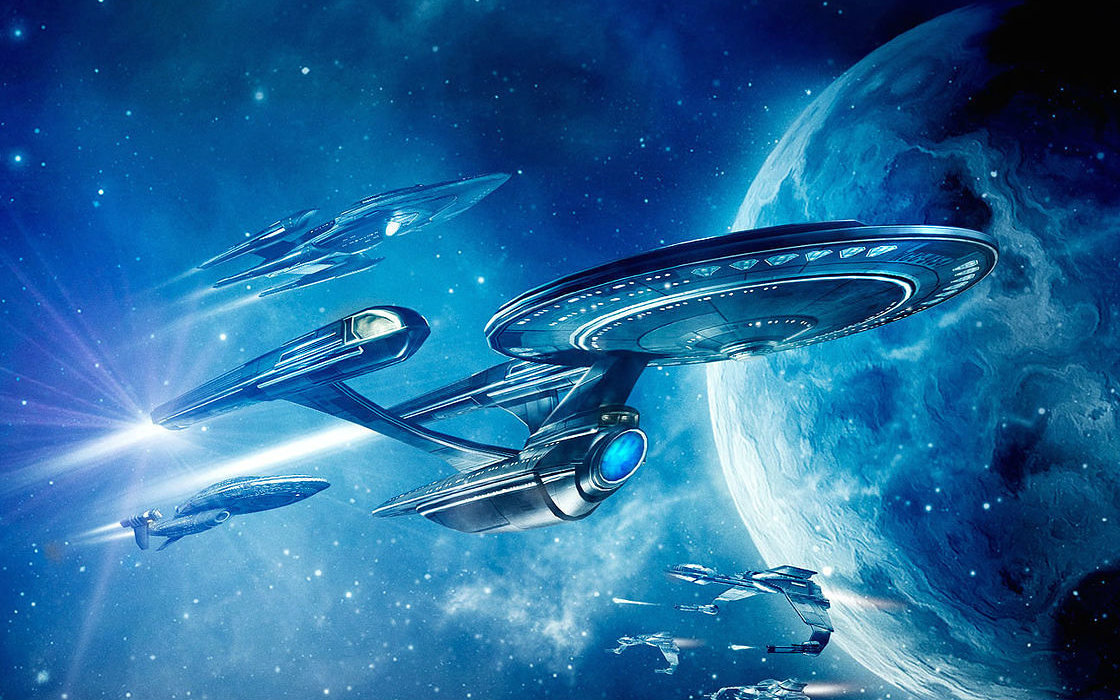 Take the nearest planet, Mars, as example. It takes a year to travel to and we need to carry at least 33.9 tons of consumable if we want to carry at least three astronauts.[7] In this process, it is difficult to bring all the air, food and water needed. Obviously these substances need to be recycled as much as possible. For the past half a century of human exploring space, the entire system is basically non-renewable, So it is called Open Loop System. Even the most advanced life support system, the International Space Station (ISS), can only work as a partial closed-loop system, circulating oxygen and controlling pressure. 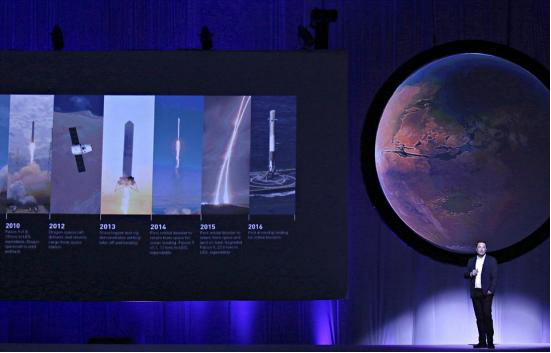 At the end of last year, the film" The Martian" vividly presents the future scene that astronauts will face. In the film, Mark lived in the desolate Mars, making the environment in cabin similar with the Earth. He used human excrement, Mars soil and the water from rocket explosion to grow potatoes. The whole cabin became Mark's life support system. And the whole story of survival reflects the core idea of the astronauts life support system - recycling everything that can be recycled. 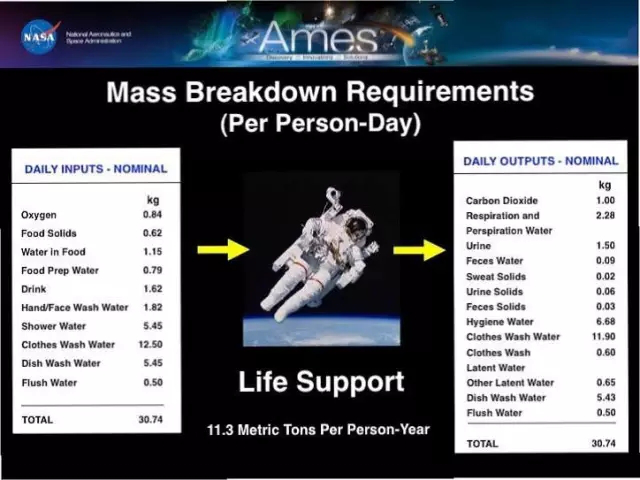 Astronauts material consumption reaches 11 tons / year, while the spacecraft to transport 1kg of goods will cost $ 10,000. The existing life support system is difficult to support to go to Mars.[9]

Facing the closed system of spacecraft, how to maximize the utilization of material and energy recycling in order to maintain the long-term space activities for astronauts has became an unavoidable and insurmountable problem for scientists. At present, space exploration continues to expand, from near-Earth orbit to deep space exploration, from landing the moon to Mars survival which may come true in the future. If Human wants to fly out of the earth like the interstellar travel in science fictions, the primary task is to maintain a reliable system of life support. Then humans can survive. 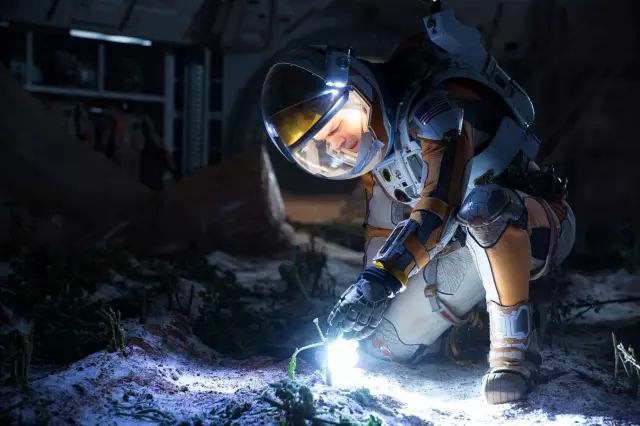 A famous line from the movie:"I gotta science the shit out of this planet."[10]

In the 1970s,the former Soviet Union successfully constructed BIOS-3 enclosed material circulation system, which could achieve 100% of the water cycle and gas circulation. However, this system still had to catalytically heat air up to 600 degrees and excreta which was dryly stored cannot be recycled. 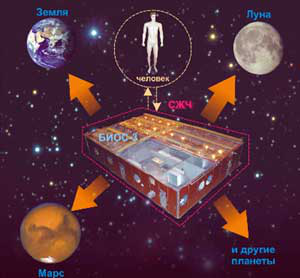 In 1986, Edward Bass from the USA established a private laboratory, "Biosphere 2", to see whether it can create a completely closed life-support system, and all the lives in system live in harmony. The whole system was completely isolated from the outside air and water, but the system failed to achieve the basic material quality balance, and ultimately failed. 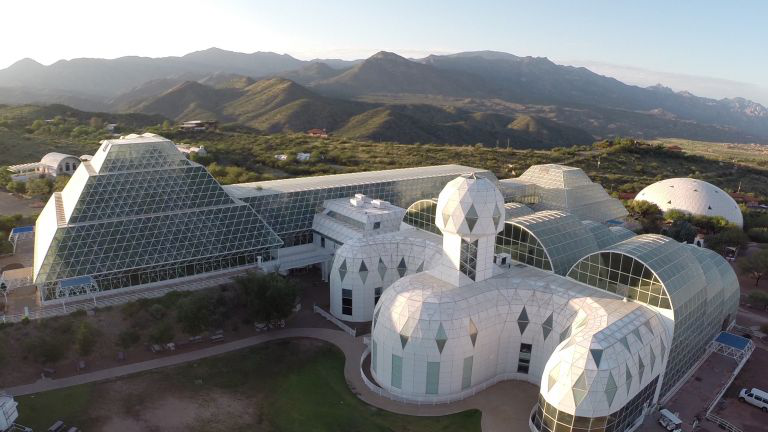 Japan completed the establishment of the Closed Ecology Experiment Facilities in 1998, which introduced plant, animal, rock-hydrosphere experimental devices.Specially, physical and chemical equipment was used to deal with the waste completely. However, due to the neglect of themicroorganisms,which isa very important loop in the system,the closed experiment only lasted for two weeks in such system.

Since 1989, the European Space Agency (ESA) has cooperated with several agencies to launch the MELiSSA, a microecological life support system research program.The ultimate goal is to include multiple compartments to achieve complete closure of the water and gas cycles. Is still exploring ... 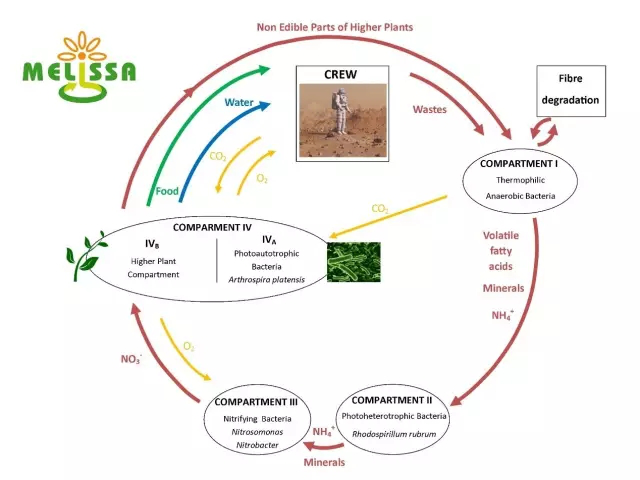 It can be seen that these flexuous exploration has the following limitations: First, those simulated ecosystems simply assemble the existing plant, animal, microbial combination. However, the natural ecosystem evolution is the result of million-years evolution.The interaction among different organisms is very complex. Artificial simulation is difficult to achieve.The second is that the stability of the natural ecosystem is based on the huge biomass,but the one of the small-scale simulation system is frail. Furthermore, scientists have been neglected the role of microbes in the overall simulation system until they found the important effects of microbes in the entire simulated closed ecosystemlater.Finally, the efficiency of energy utilization and material recycling in natural ecosystems is too low,which requires a large number of ecological space in order to satisfy the astronauts' living requirements (average 100 square meters per person).

Our previous experience has shown that if we want to build a closed-living bio-regenerative life-support system to realize the material cycling in the space environment, we need to search for the new ideas instand of just simply “add or subtract" biomass.It is developing the entire circulation system design from the bottom and making full use of the advanced functions among different species, avoiding weaknesses, ultimately achieving material circulation and life support efficiently without any pollution.

To solve the complex problems of long-term space travels such as material cycling and life sustainment relying on the existing biological resources of the earth's ecology,we face the challenges including the cost,volume, flexibility and availability. we can’t just simply "add or subtract" biomass but search for the new ideas,develop the entire circulation system design from the bottom and make full use of the advanced functions among different species, avoid weaknesses, ultimately achieve material circulation and life support efficiently without any pollution. That is the method how synthetic biology solves the problem and what it expects. The platform of synthetic biology ensures that the search process is more reliable. Because the biological platform has a self-replicating function and the flexibility to produce food, materials and special compounds.

In fact, since the birth of synthetic biology, there has been a very marginal and mysterious branch, Space Synbio. ARC (Ames Research Center) defines space synthesis biology as a subject that provides reliable biological tools and techniques to sustain human activities in space, reduces the risk of space exploration, and drives some hypothesis-driven research. [4] 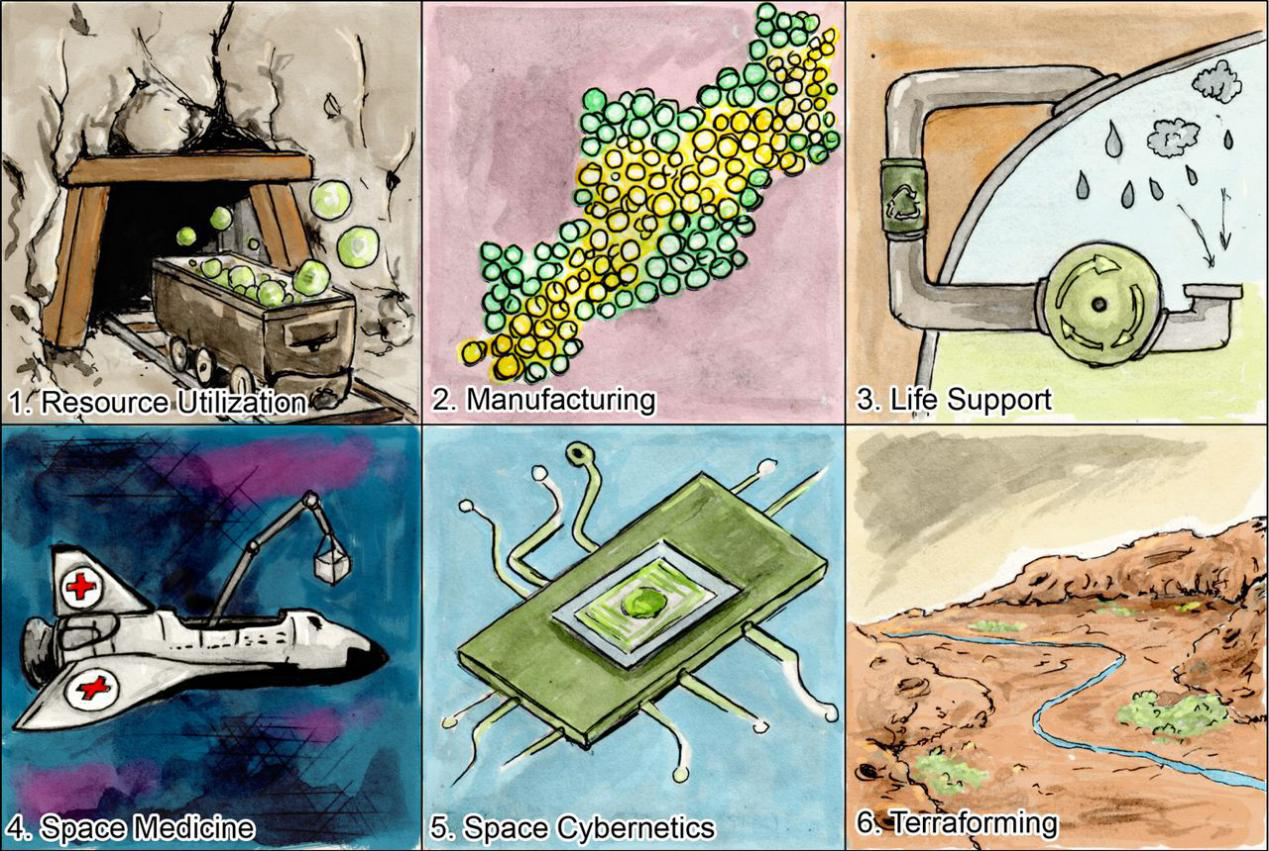 Back to the Earth

Solving the carbon cycle problem in the space closed-loop system and realizing the recycling of carbon dioxide, not only can provide material guarantee for a long time exploration in deep space for mankind, but also give the method to solve the food crisis and climate problem and meanwhile produce huge economic profits.

Nowadays, the human civilization has achieved unprecedented prosperity. However, there are still many people around the world who are struggling for basic food and clothing. The population of the world continues to grow at an annual rate of 0.77% [1] which is far more than the growth rate of cultivated land. Over the past 20 years, we have cut down over 130 million hectares of forest, but only get 47.5 million hectares of arable lands [2]. Deforestation has not only failed to solve the shortage of arable lands, but also brought a new environmental disaster. We have been caught in a vicious cycle. If we don’t need to rely on large-scale arable lands, traditional food crops, and develop efficient carbon dioxide fixation and food production with solar energy, nuclear energy and other clean energy intensive, we can jump out of this vicious cycle, and build a more harmonious and livable planet for future generations. 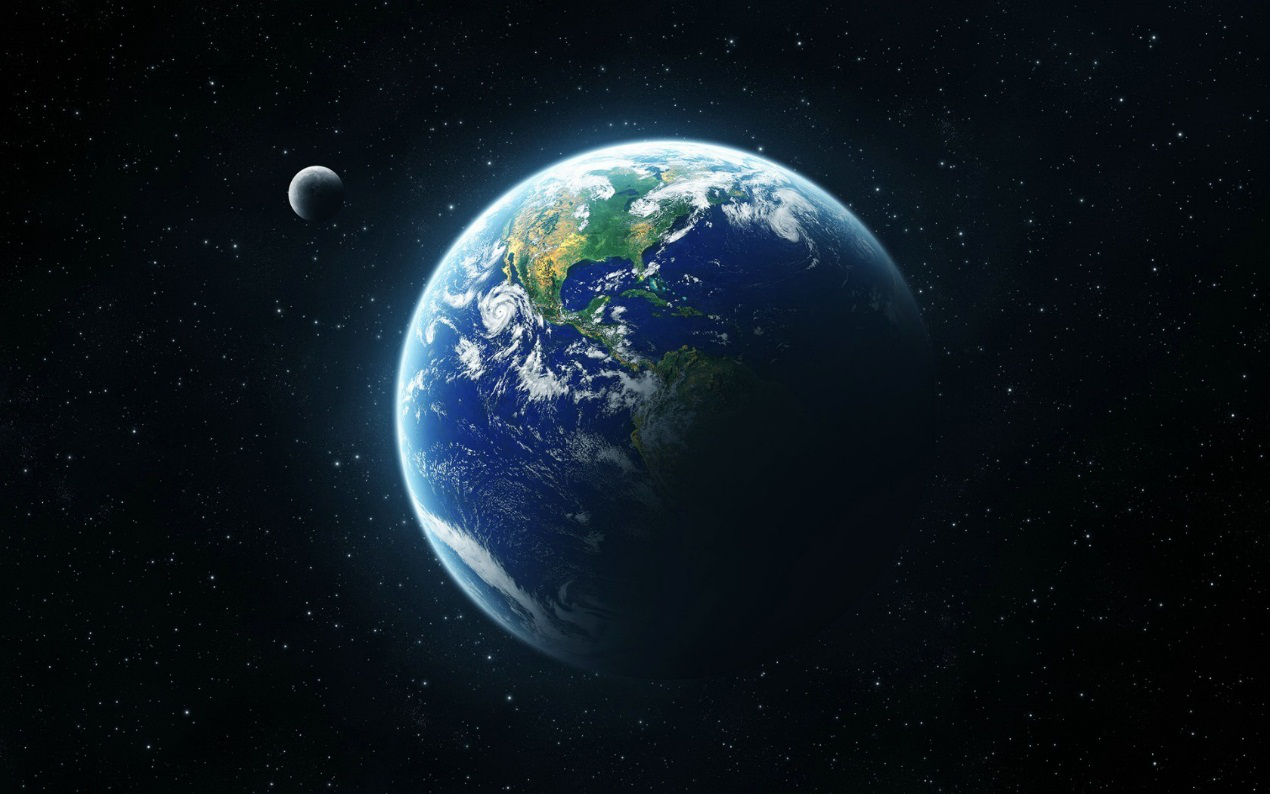