Achieving long-term space resides and interstellar travel is a long-standing dream of mankind. For a closed system such as a spacecraft, how to maximize the recycling efficiency of material and energy in order to maintain the astronauts’ long-term space activities has become an inescapable but difficult problem for scientists to overcome.

This year, we focus on the issue of carbon cycling in spaceships during long-term space travel. We hope to use E.coli to realize the re-use of carbon dioxide metabolized by astronauts, like green leaf, and to synthesize Glycogen which can be reused by astronauts,using formaldehyde as the sole carbon source. The device,which can maintain the carbon cycle in the long-term spacecraft,is what we call the Blue Leaf.

From the 1960s, the former Soviet Union, the United States, the European Union and other space organizations have tried to construct bio-regenerating life-support system under earth 's closed environment in order to simulate the material recycling process in space environment. However, the results are unsatisfactory. We need a new idea to solve this problem! Space synthesis biology, as a mysterious branch of synthetic biology, has brought possibility to solve such an interdisciplinary scientific frontier problem![1]

Last year, the iGEM team AACHEN2015 used E.coli to design a pathway for Glycogen by methanol.[2]They used electric conversion to get methanol,which is the raw material. And then,they formed glycogen combined with methanol Condensation Cycle and Glycogen Metabolism. Though they aimed at using methanol to form glycogen, in fact,they overlooked one of the most important aspects! This pathway requires a five-carbon sugar and formaldehyde converted from methanol to form glycogen. However, the five carbon compound needs to be obtained by E. coli from other glycolytic pathways. In other words, E. coli must consume at least one molecule of six carbon sugar to synthesize a glycogen hexose sugar monomer. The route cannot synthesize Glycogen with only one carbon compound as the sole carbon source, and is not suitable for the closed-loop system of spacecraft.

This year, we have designed a new carbon cycle system. The system consists of three parts. 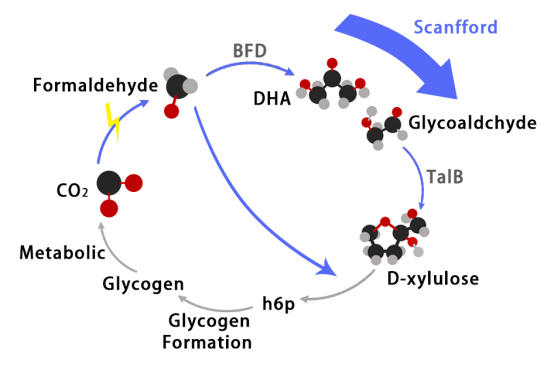 In the first part, electrocatalytic reduction of carbon dioxide. The use of mature carbon dioxide fixation technology turns the carbon dioxide in the air into formic acid[3], and then gets formaldehyde which is the sole carbon source by specific enzyme.[4]

The second part is the new formaldehyde condensation pathway which can achieve the efficient synthesis of D-xylulose from formaldehyde. This is the part that connects the front and the back of the entire Blue Leaf project, and also determines whether the entire device can be used to synthesize starch with a carbon compound as the sole carbon source. We found two enzymes with different condensation functions, BFD and TalB. The former can turn formaldehyde condensation into two intermediate products: dihydroxyacetone and hydroxyacetaldehyde.The latter condenses two intermediate products into a five carbon sugars Compounds: D-xylulose. Our wet experiments also also focused on the validation of this pathway and the efficient expression as well as the catalysis of both enzymes.

In the third part, Glycogen Metabolism can be used to synthsize D-xylulose into Glycogen.[5]

In addition, in order to enhance the efficiency of the combined catalysis, we used synthetic protein scaffolds technology[6]. We have optimized the protein scaffold sequence and performed functional validation on the basis of the iGEM CONCORDIA 2015 team.[7]