Our team aimed to create a training protein system. We put a lot of effort to let the modified enzymes have a better work. First, Our team turned to get the enzyme’s three-dimensional structure. After that, the system was separated into two parts to improve its activity. One was to mutate its gene sequence; another was to make a surface display separately using E.coli and Yeast. Besides, we used the hydrophobic protein to modify the surface of reaction system to increase its activity. The project was impressive in a number of ways.
Crucially, we went to the Environmental Protection Agency (EPA) to discuss with experts in the field of Plastic recycling and degradation. We understood more deeply the problem we were facing to solve and how to put the thoughts into reality to solve the white pollution.

This time, we put forward a new system about enzymology called Training Protein. System. It can be applied on every enzyme. According to its self-characteristic, people will do targeted modify on the enzyme in order to an extensive application.
Frist and the foremost, researchers should analyze the three-dimensional enzyme structure and understand its characteristic for well-directed proceeding to the next section. The next step has two paths, one is directed mutation, which site is chosen by analyzing the three-dimensional protein structure to find its functional domains, and the other is surface display. Surface display can improve the catalytic efficiency of the enzyme, and avoid the trouble of protein purification.

This year, we focus on solving the white pollution problem. Not only do we manage to put Training Protein System into use on PETase, but, on the basis of the character of PETase degradation, our project has been extended.We have improved the function and characterization of two previously existing BioBrick Part which are created by our own team in a previous year of iGEM(BBa_K1582000&BBa_K1582001).Our particular desigin is shown as follows.
BBa_K1582000
BBa_K1582001
Hydrophobin is a small molecular weight protein produced by filamentous fungi, which is characterized by the ability to form a layer of amphiphilic protein membrane at the interface in order to reverse the nature of the interface covered. Hydrophobin amphipathicity refers to the hydrophobic nature that the hydrophilic end of a hydrophobin. The hydrophobic protein and PETase fuse fusion protein, whose characteristics are adsorption of PET film and PET film properties degradation.
The yeast cell wall is hydrophilic while the hydrophobic protein is hydrophobic. Due to its amphiphilic nature, the hydrophobic protein binds to the surface of yeast cells spontaneously and binds the hydrophobic surface toward the extracellular side, which adsorbs the PET film through the hydrophobic interaction force. Utilized amphiphilic and high temperature, acid and alkali resistance characteristics of hydrophobic protein, co-display the PETase and hydrophobic protein on the surface of eukaryotic cells helps in greatly improving the enzyme activity and broaden the reaction conditions of the enzyme.
At present, result in yeast industrial fermentation technology matures, using yeast as the host cell is conducive to the future industrial applications. 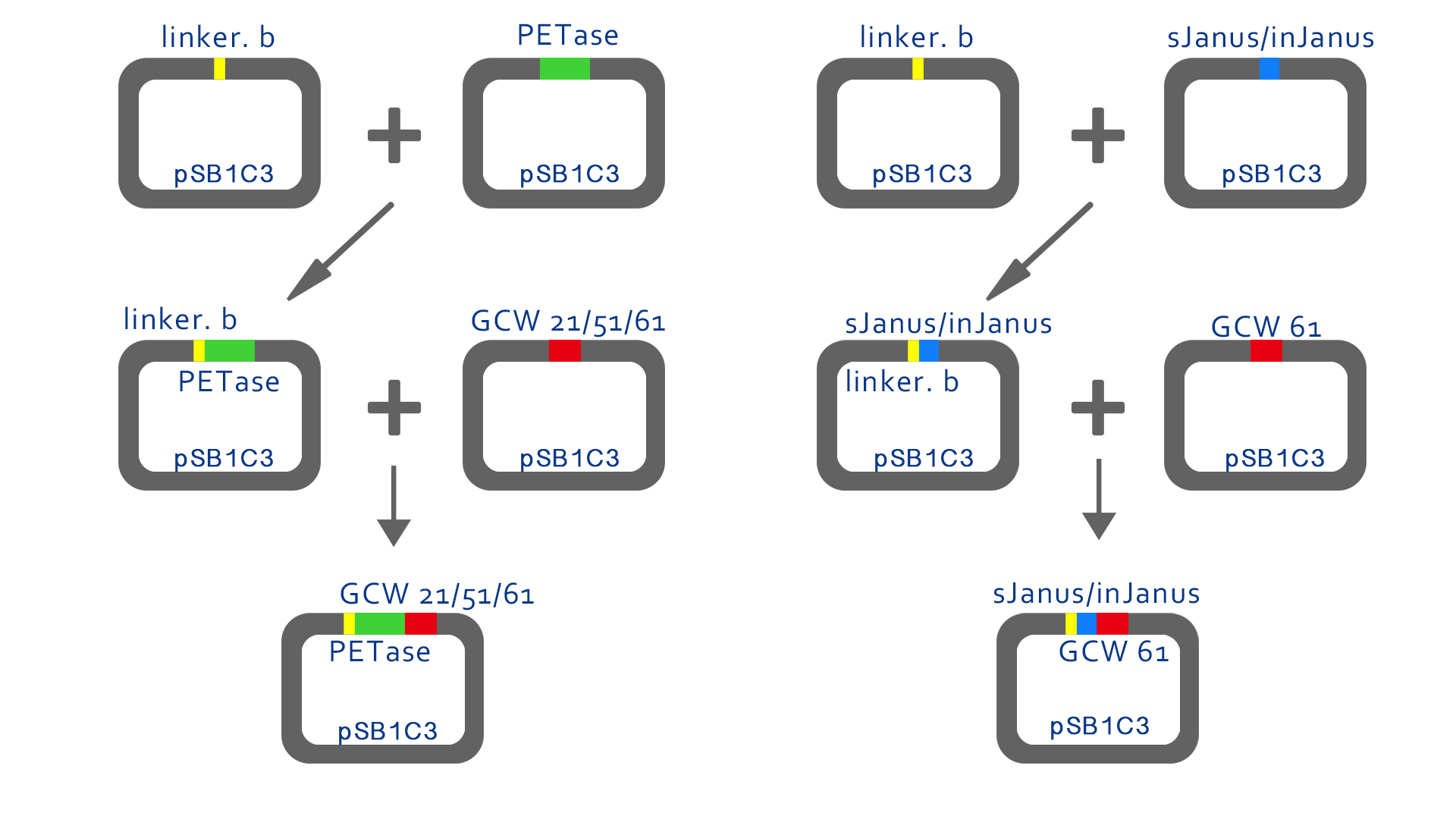 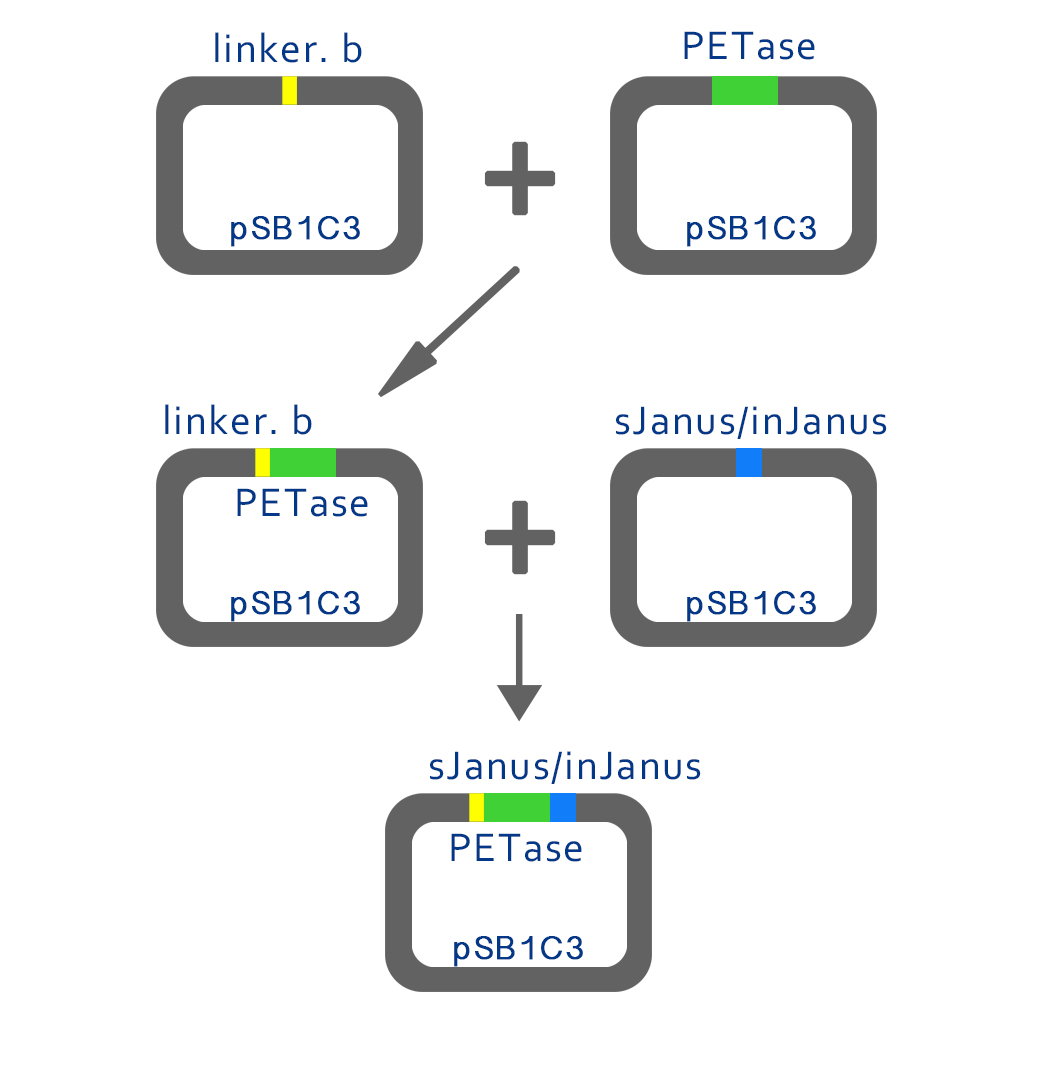 transformation of the existing BioBrick Part(inJanus&Janus) 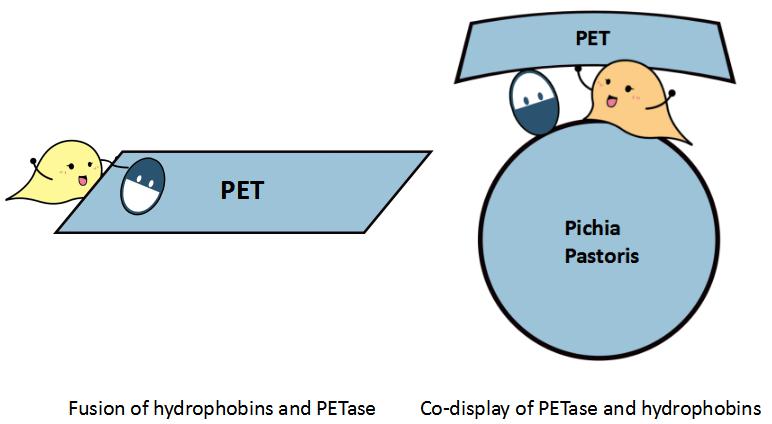