Our first step was to generate some strains of E. coli that our research suggested would hypervesiculate. These are shown below:

Our knock-in mutations were achieved by expressing g3p, TolR, PP-RFP, or INPNC-GFP in a T7-promoter driven vector (either pET or pRSF Duet). Final assembly of these plasmids was achieved using Gibson assembly. 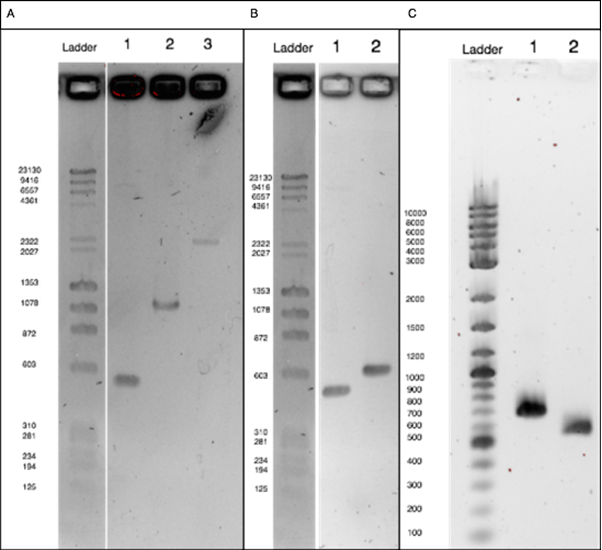 These expression plasmids were transformed into NEB T7 competent E. coli cells, and ΔdegP or ΔtolA knockout strains, and expressed as seen below

Expression of tolR, g3p, INPNC-GFP and PP-RFP was tested in NEB T7 E. coli by inducing T7 polymerase expression with 1mM IPTG. The knock-out strains, meanwhile, had T7 polymerase under an arabinose-inducible promoter. Therefore, gene expression was tested in these strains following induction with 50mM arabinose. Protein samples were extracted from each of these cell types after 3 hours of induction, run on an SDS PAGE gel, and stained with GelCode Blue Protein stain 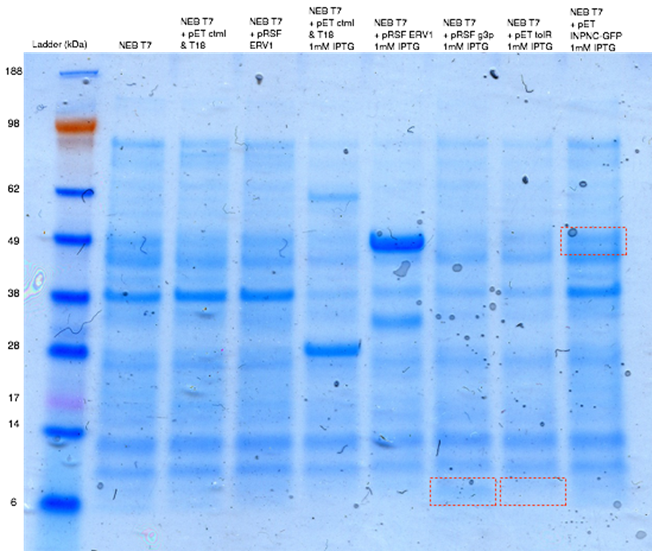 This SDS PAGE shows some evidence of g3p (7.99kDa) expression, but no evidence for TolR (8kDa) or INPNC-GFP (60kDa) expression. Therefore, the gel was cut at the expected sizes for g3p, TolR and INPNC-GFP for protein extraction and mass spectrometry analysis. This detected 47/71 residues of g3p (66% coverage); this is further confirmation that g3p is being expressed. However, only 18/76 residues of tolR (23% coverage) were detected, and none from INPNC-GFP; thus, there is weak to no evidence that these were expressing in our NEB-T7 cells. Next time, we will use a different enzyme to digest the bands (Chymotrypsin instead of trypsin), as that would give a range of peptides that would be easier to detect by mass spectrometry

The NanoSight LM20 provides analysis of nanoparticles between 10nm and 1μm. Our review of the literature has shown that OMVs can range in size from 10nm-25nm in diameter, which falls within range of this instrument’s capabilities. To prepare our strains for analysis, we grew them up overnight, leaving 12h 15m for induction, and then harvested OMVs as per our protocol on the experiment page. Figure 3 below shows the nanoparticle count for each of these analysed samples (x10^8 per mL per OD600). 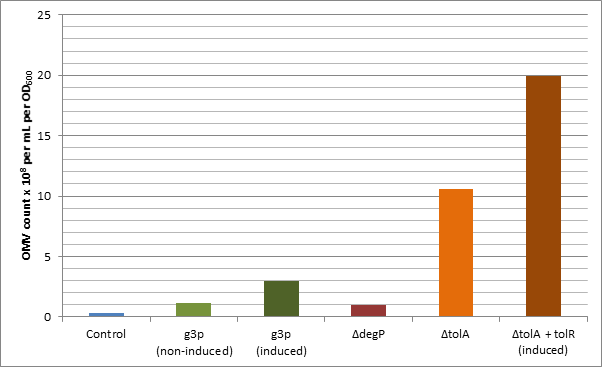 Here, the height of the bar indicates the number of particles (in the hundreds of millions) that the nanosight detected in each sample, where the assumption is that the number of particles strongly correlates with the number of OMVs in that samples. This shows that, in line with the literature, control cells vesiculate at the lowest rate. We also showed that inducing expression of g3p increased OMV count, thus showing the part works as expected. The two KO strains also hypervesiculated relative to the control, with ΔtolA vesiculating up to 20x as many OMVs as control. Interestingly, expression of tolR in the ΔtolA strain further doubled the OMV number; while this strongly suggests that tolR greatly boost vesicle count, it should also be tested against the control strain with a lower background OMV count. All in all, then, the data from the NanoSight are consistent with expectations that these strains should hypervesiculate, and thus show our parts work as expected. It is worth noting that these data were collected in one run, with no replicates, as the machine is expensive to run; these data should thus be replicated for stronger conclusions to be drawn.

However, to quantify OMV expression it is worth considering not just the number, but the size of these OMVs. Below are a the size distributions of particles detected by the NanoSight in each sample.

As seen in figure 5, expression of tolR shifts the peaks of particle size to 130nm, 170nm, and 310nm, which is higher than when tolR is not expressed where the peaks are at 17nm, 81nm, and 115nm. When we combine these data with the above, tolR increases both the number and size of particles, and thus the number and size of OMVs, hence it is an effective part for inducing hypervesiculation.

Figure 6: Size distribution of OMVs, comparing NEBT7 E.coli with g3p either induced or not induced

Likewise, induction of g3p expression was shown to increase the size of particles, with peaks shifting from 77nm to 102nm. Again, in combination with the data suggesting the particle count is also increased by g3p expression (Figure 4), there is evidence that g3p is effective at inducing hypervesiculation.